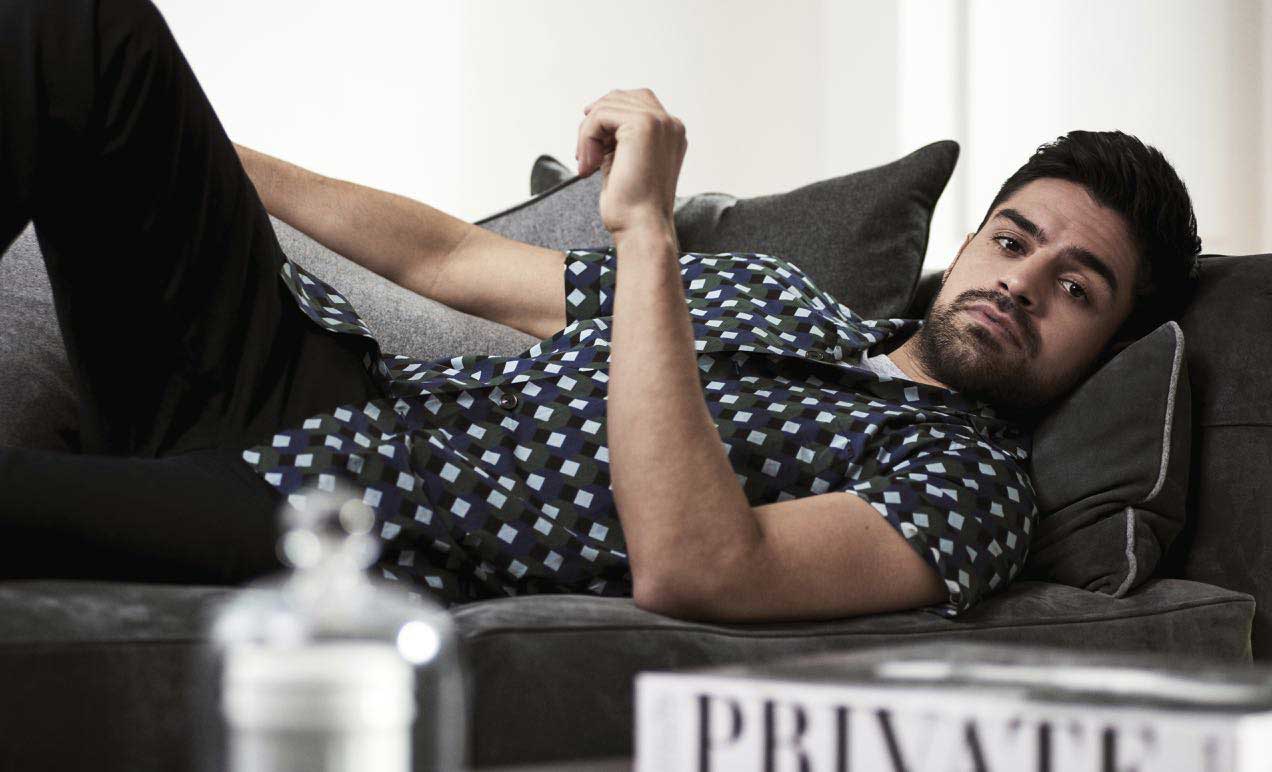 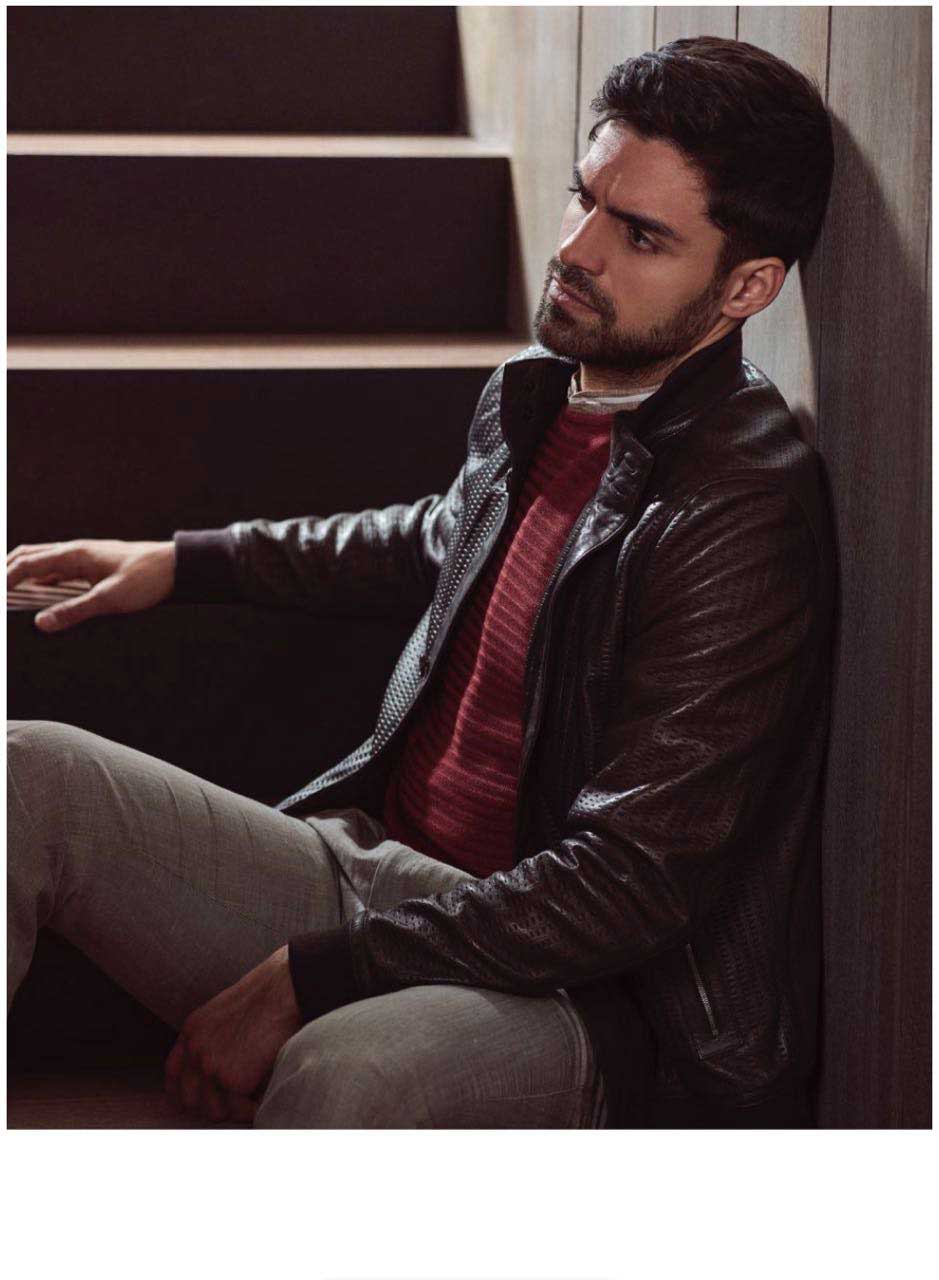 Trisha D’Hoker: Tell me about your latest project.
Sean Teale: I’m not able to say too much, but it’s a show set in New York, about a young songwriter and the creatives around her trying to navigate their way, not only through New York, but through their industry, finding their creative voices and learning how to use them. It’s very sweet and real and it’s so different tonally to anything I’ve done.

TDH: It sounds very character-driven.
ST: It’s very much Brittany-driven. Brittany O’Grady is the lead, we’re all there very much to support her. I play a film director, someone she meets in New York and they fall for each other. There is obviously drama afoot, but I’ll leave it there.
But it was nice, I actually played an Englishman in New York in this one, which is a nice change. I haven’t used my own accent in a while and it felt weird. It ends up feeling sometimes like you’re not doing work. Usually once you start speaking in a different way, you’re less at risk of slipping into ‘Sean’. The greatest actors end up feeling comfortable with that and are able to play close to themselves and be as real and honest as they need to be without fear. I feel I’m getting closer to that. When I started I wanted to transform as much as possible, but now, with more confidence and experience, I realise I have to bring out as much of my own experience, turn up the relevant bits, leaving the rest.

TDH: A lot of people will remember you from Skins. Was that your first big job?
ST: Yes, when I was 19. That was a tough show, looking back on it, an amazing experience, but I don’t know if I’d go back. It was hard. I wasn’t happy, if I’m honest. I don’t know if I’ve ever discussed it. I will never negate it was an immensely important job, and I’m grateful, it was huge. We were all incredibly lucky to be there and be involved with it.

TDH: What was it that made you unhappy at the time?
ST: It wasn’t an easy job and I wasn’t a happy person. I was also unhappy in my own skin on a show that required you to show a lot of it. And that was tough. I’ve had some very visceral reactions while working on Skins, big panic attacks, and that all came from me putting myself in a place in front of the camera so they could get what they needed, so we were happy with the story, so people could watch it and enjoy. But no one asked me to do this, I put myself in that place. And it is certainly my prerogative to build filters and structures around to help me handle that.
And none of us were really prepared for what we would receive on-line. It was the first time I’d ever received media training.
.
TDH: Skins was so different to anything that had come before.
ST: This was kids dealing with illness, with abusive parents, drug abuse, bulimia, mental health issues. Things that real teenagers were dealing with. It’s funny, when America did the word-for-word remake, they called it Child Pornography and it got cancelled. Parents and Teachers Associations’ got a hold of it and said, Our kids don’t do that. So the same thing that won a Bafta in the UK, got cancelled in the U.S.

TDH: Did you grow up in London?
ST: Yes, I’m very much a Londoner. Although I wouldn’t always call London home, London has shaped who I am as a human being; you take it with you.

TDH: But you’ve been working more in the States and Canada than here since Skins?
ST: Yes, and I love it there. I love Toronto. With the States, if you look at the way things are now, it’s crazy, a festival of madness that engrosses and fascinates as much as it repels. America is so young and so volatile, it’s still trying to figure itself out, and the people can be some of the most open and exciting and hopeful.

TDH: So you’ve worked primarily in an American accent then.
ST: Yes but (in thick Scottish brogue) I’d love to do Scottish. I actually thought about doing it for the last show I was on. It read like it could have been Scottish, and when I was talking to the show runner, she said, Ok, but are you just doing this cause you want to play it with a Scottish accent, or is it a creative choice, because you think it will make the character better? And I said, Ok, maybe I’ll just do it in English. I can’t start playing with this, this is their baby, I can’t be like Oh ya, I’m gonna do it Scottish for the fun of it. So in Little Voice I play an Englishman, and because I have a partner on the show, they were like we need to know which accent you’re going to do, because we have a girl who can do English and a girl who can do Scottish. I thought, Oh no, now I’m playing with people’s careers, because of my fucking silly hubris, no, no, no. But they had me try a few different accents, it was completely ambiguous. They asked for South American, American; they asked me to try Welsh. 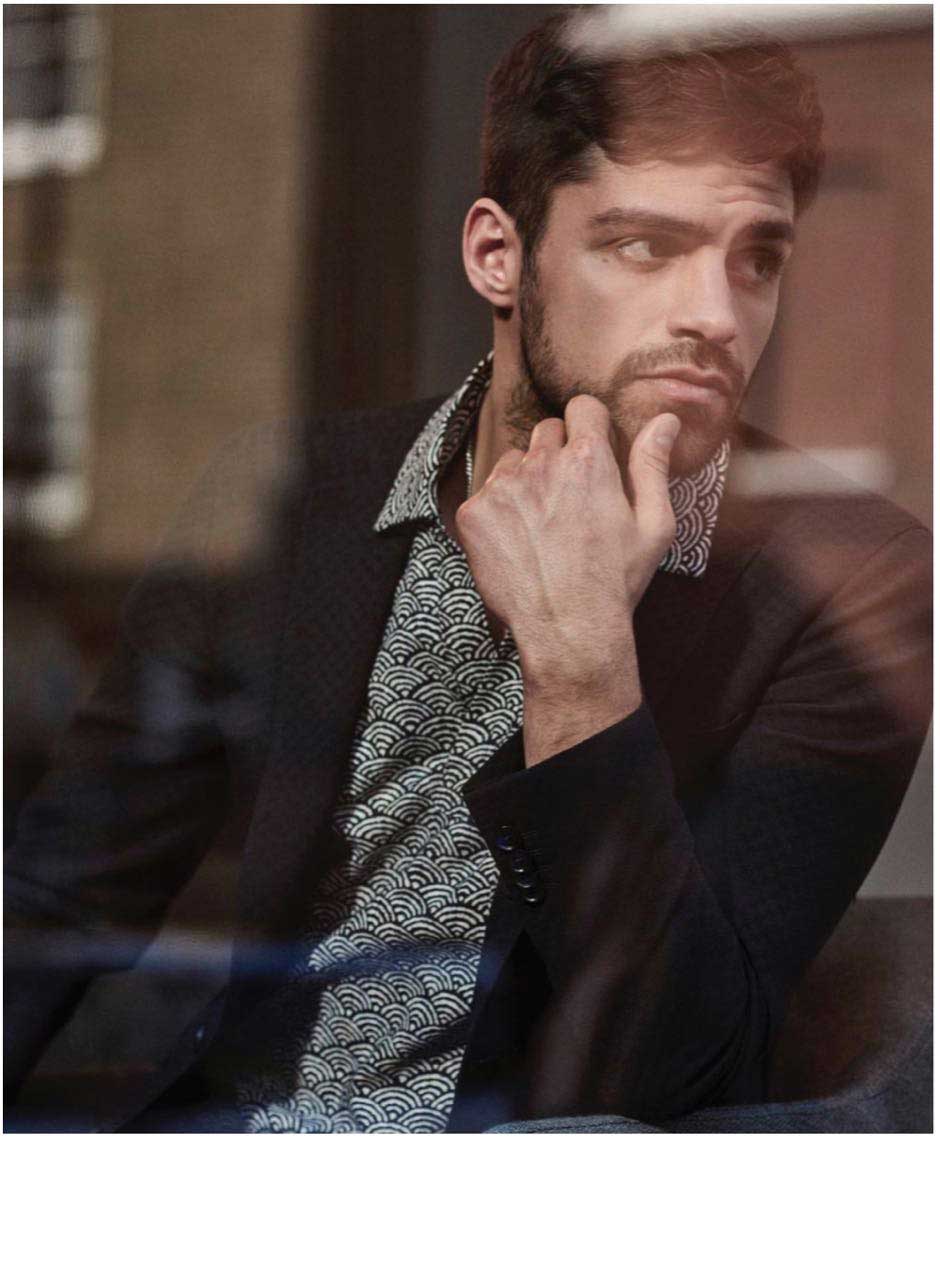 TDH: Do you have a bit of Welsh in your background?
ST: I do, yes, thank you for asking, via my grandfather. It’s a strange one, and so indicative of the world now, but it’s always more than nationality. My grandfather was Welsh, but he was very prominent in Venezuela, more so than in Wales. And so that side of my family is very Venezuelan, even though they lived all over the world. My dad and his siblings lived in Paris, Milan, London, so they all were very European, and spoke all these different languages, but technically Venezuelan-Welsh blood.
And then there is my mother, who is very Latin. Her name is Delfina. She’s the most beautiful woman, such wonderful style and has the most amazing grace about her and this incredible energy and she’s so positive and so hopeful of people and always sees the best in them. Which is exactly what all the men in my family need! But I’m so lucky. I always say that If I could be half the person she is when I grow up … anything good in me, I’ve received from her, that lovely lady. She’s technically Spanish by blood, but all of her family is in Venezuela still, her siblings, my grandmother. So there is the blood but then the nationality is something else.

TDH: I think it has a lot to do with the experiences of where you grow up.
ST: All the culture around you. My family is a big mishmash, but as I get older I find myself aligning more with my Hispanic roots than I did before. I think when I was younger I just wanted to be as British as possible. Because you want to fit in. Trying to fit in definitely shapes you.
When I was younger, I could sympathise with things so powerfully, much like my mother, she gave me that. Obviously you need a filter, or you feel too much, take on too much, but I think I just plunge headfirst into feeling first.

TDH: It must help with your acting.
ST: Definitely it does help with performing and I think it makes me put more empathy into parts that maybe were less empathetic to begin with. It’s a challenge and I enjoy it. I’ve played a lot of very emotional people.

TDH: Like in The Gifted.
ST: Like in the Gifted. I’m a man on the run, who’d been constantly persecuted, abandoned by his family. And he has no life, other than this girl Polaris and this group that has been formed, saving mutants, fighting back against a world that doesn’t love them, doesn’t want them, and persecutes them for being themselves. Which is all too relevant now. And then he loses her, she turns dark, and takes his child away from him. So I spent two years just irate, in a state of complete … I would drive home sometimes with my hands shaking on the wheel. Because you pump your body full of all these feelings and then they yell, Cut! and tell you to go get a bagel or something. But how can you put anything into your mouth when your hands are still shaking? The performance might be manipulated, but the endorphins are not.

Doing Incorporated, where I played my first lead role, was an emotional experience for me. I was 23 and I played a 17 year-old and a 30 year-old at the same time. I usually don’t watch myself, but I really had to force myself to get over it, because this time I had to, just to keep track of both personas and different timelines. Also, the nature of these shows meant that directors come in episode by episode and they move on; they are journeymen, that’s what they do. But that means when they come in they naturally want to leave their own impressions on the work. So as the only constant, I had to make sure it worked, and I had to stay on top of it. It was a big responsibility. I think I slept two hours a night for seven months, and I wasn’t tired. I did not care. I’d gone out two months earlier to train like a lunatic to lose all this weight to be a refugee, along with all the other work you should do – and I remember being so excited and so afraid of failing.

TDH: That’s a powerful motivator.
ST: It is, but with all this responsibility comes great growth, because if you rise to the challenge, which you end up doing because you’re so fearful of not, then all of a sudden you’re out of your comfort zone and that’s when you learn.
But I loved that job, it was truly special. Like The Gifted and that group of people, I love how casts can be close together.

TDH: Have you done much theatre?
ST: That was my initial buzz, the drug that got me hooked, the potential chaos of walking out there and it’s up to you not to allow it to become that. It’s different all the time. You think on your feet but you’re also safe because you know what you’re doing and you have to trust that others do as well. And that’s not only unifying but also arousing and exciting and fear-inducing. But isn’t that what it’s about? And I think the medium that I’ve ended up working in the most can actually suck a lot of that out because it’s safer when you’ve got 14 chances to do it, and thirty different angles, and there’ll be re-writes – which is a different set of skills but not as volatile as theatre, and sometimes I want to bounce. So yes, I do miss it and it’s where I started.

TDH: How do you relax?
ST: I travel a lot. I am quite OCD, so I like to plan, like where we go and what restaurant we’re going to go to, but I’m not overly-planny on activities. I do love looking forward to something though and I love getting it right – it is so satisfying! 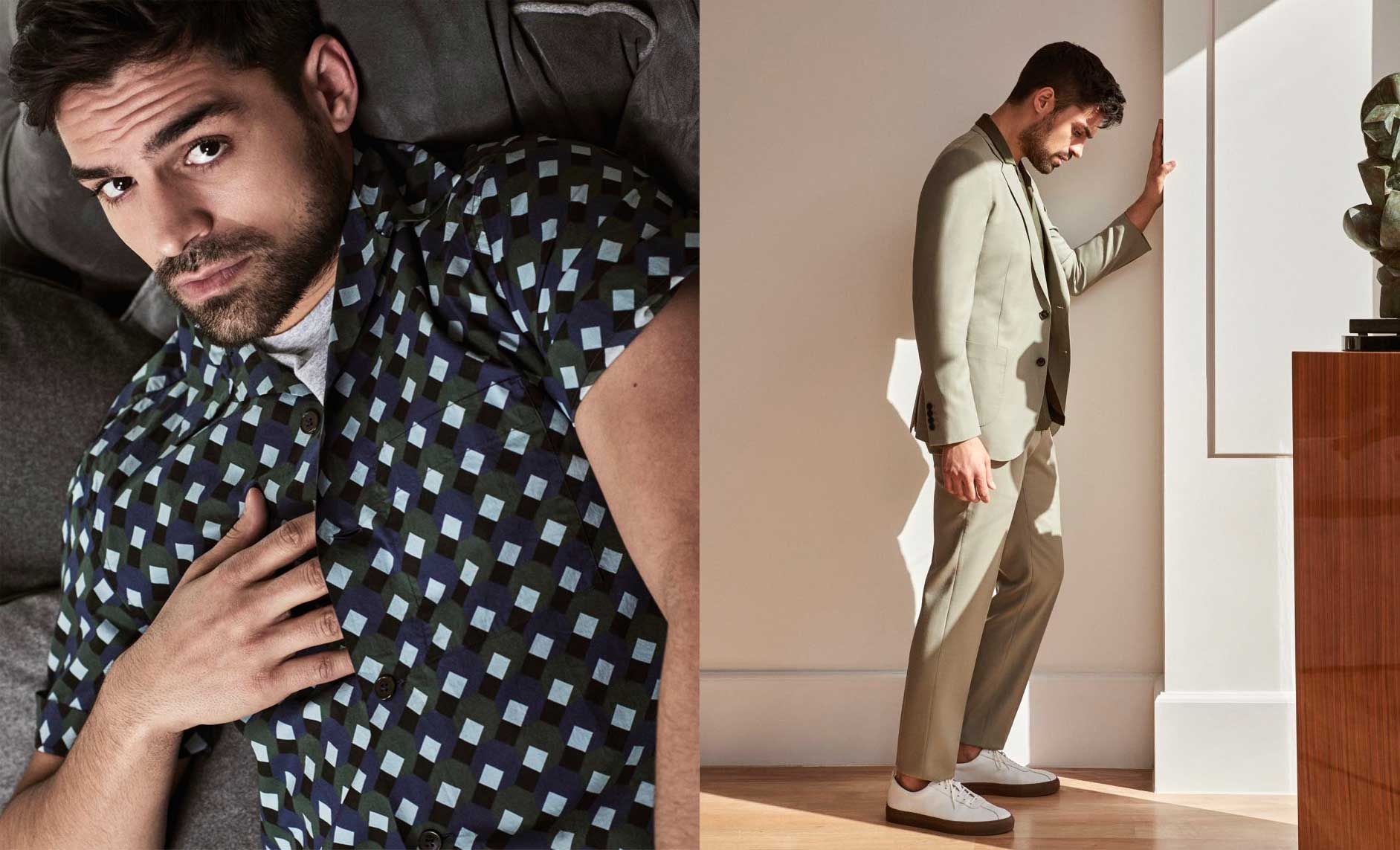 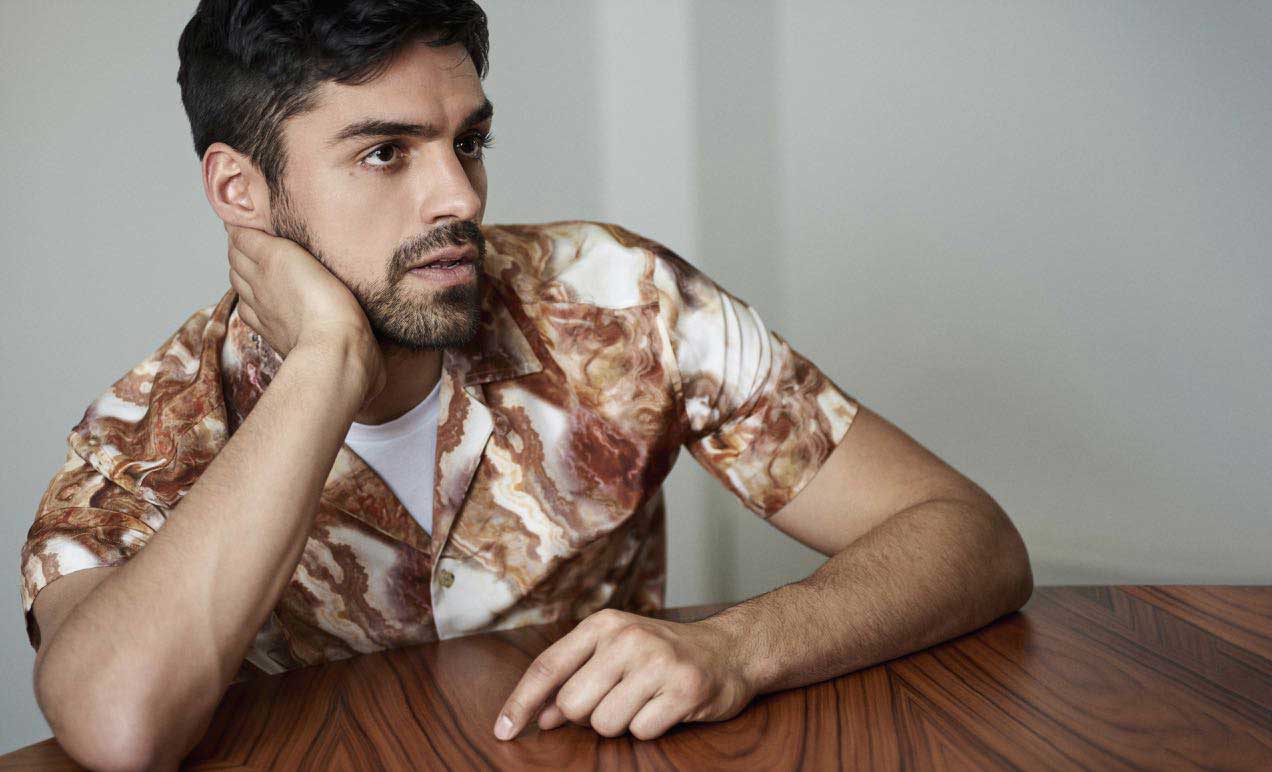 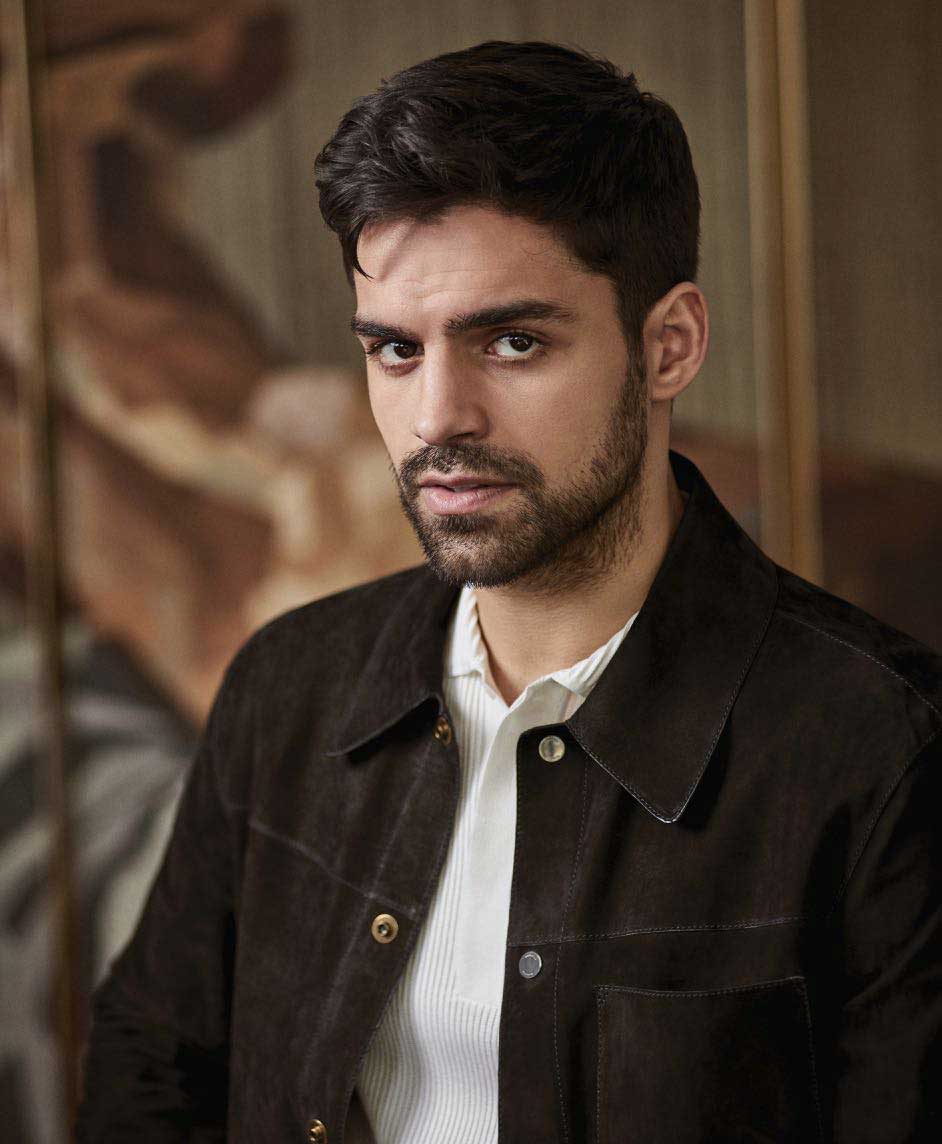