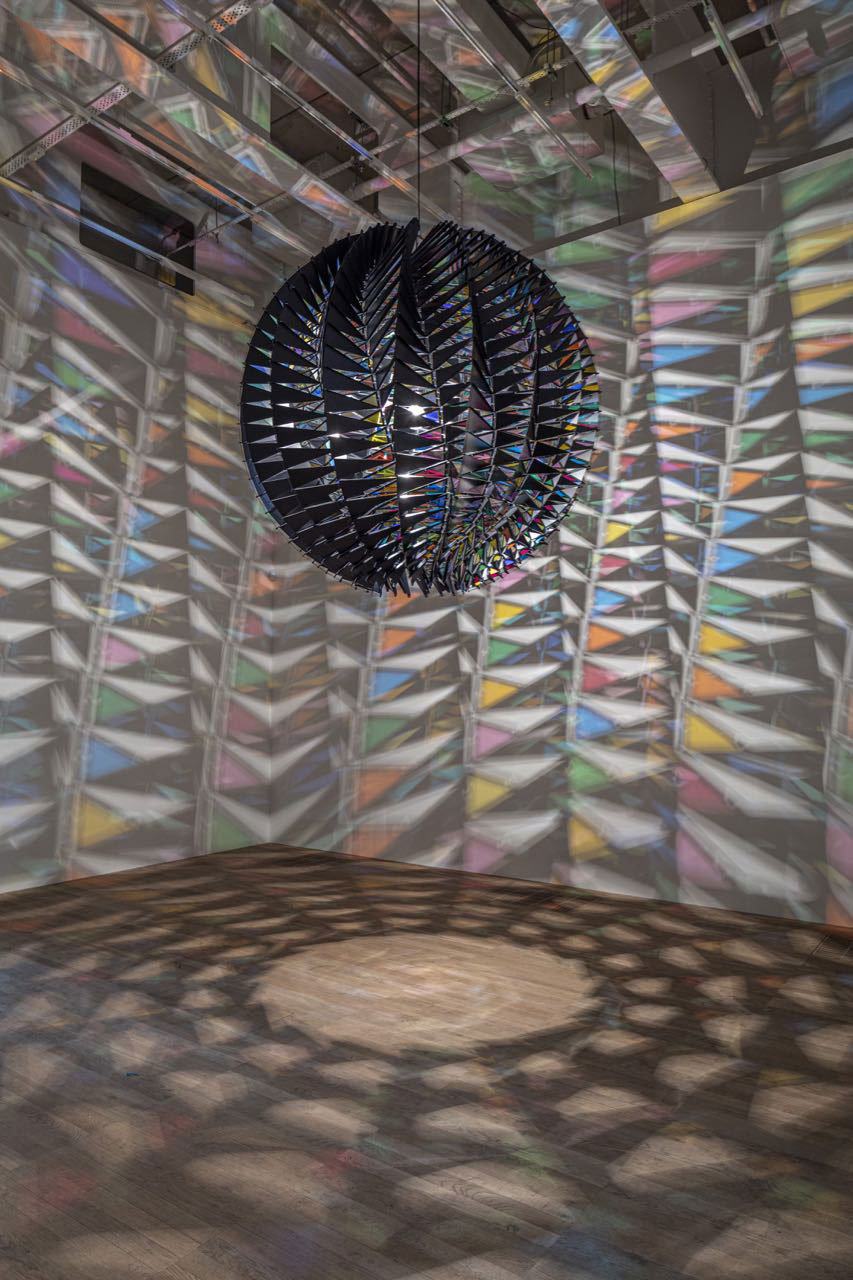 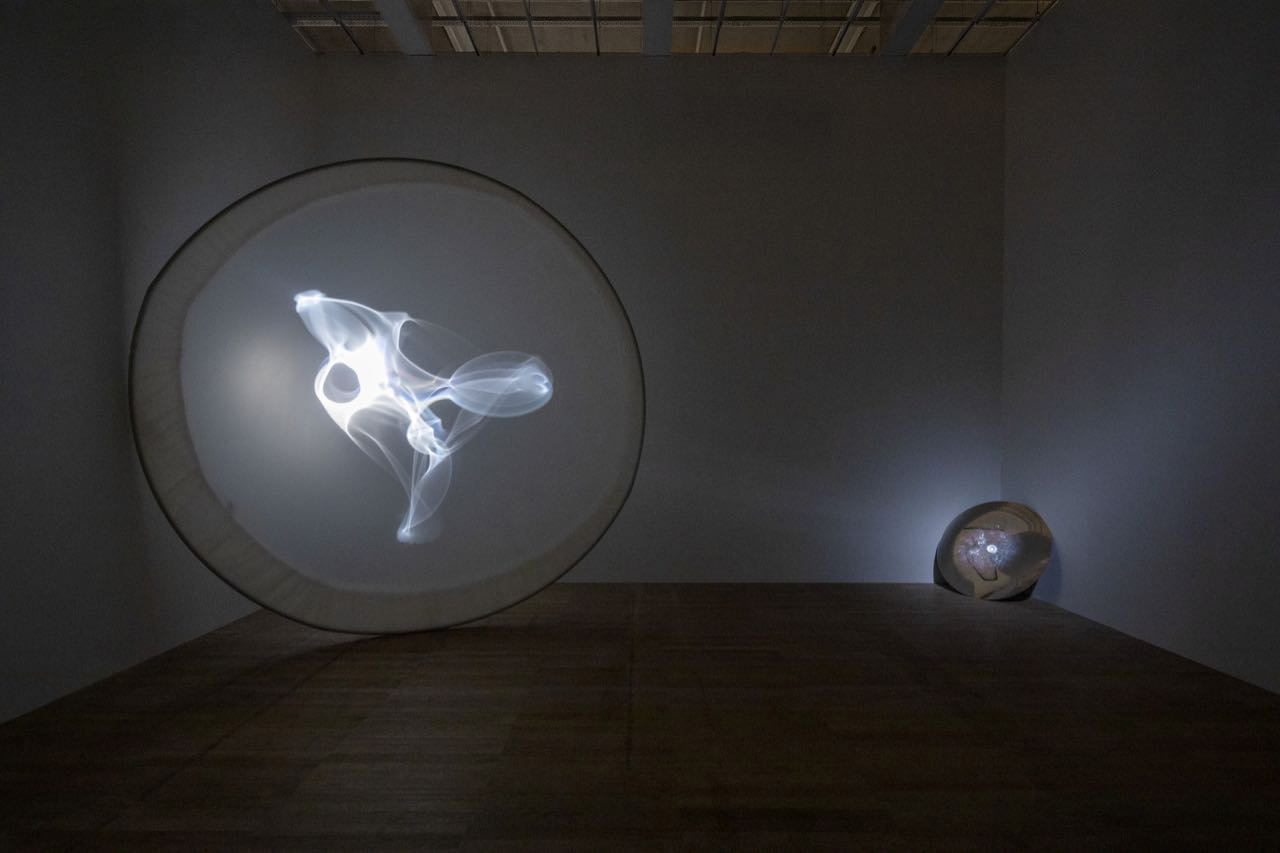 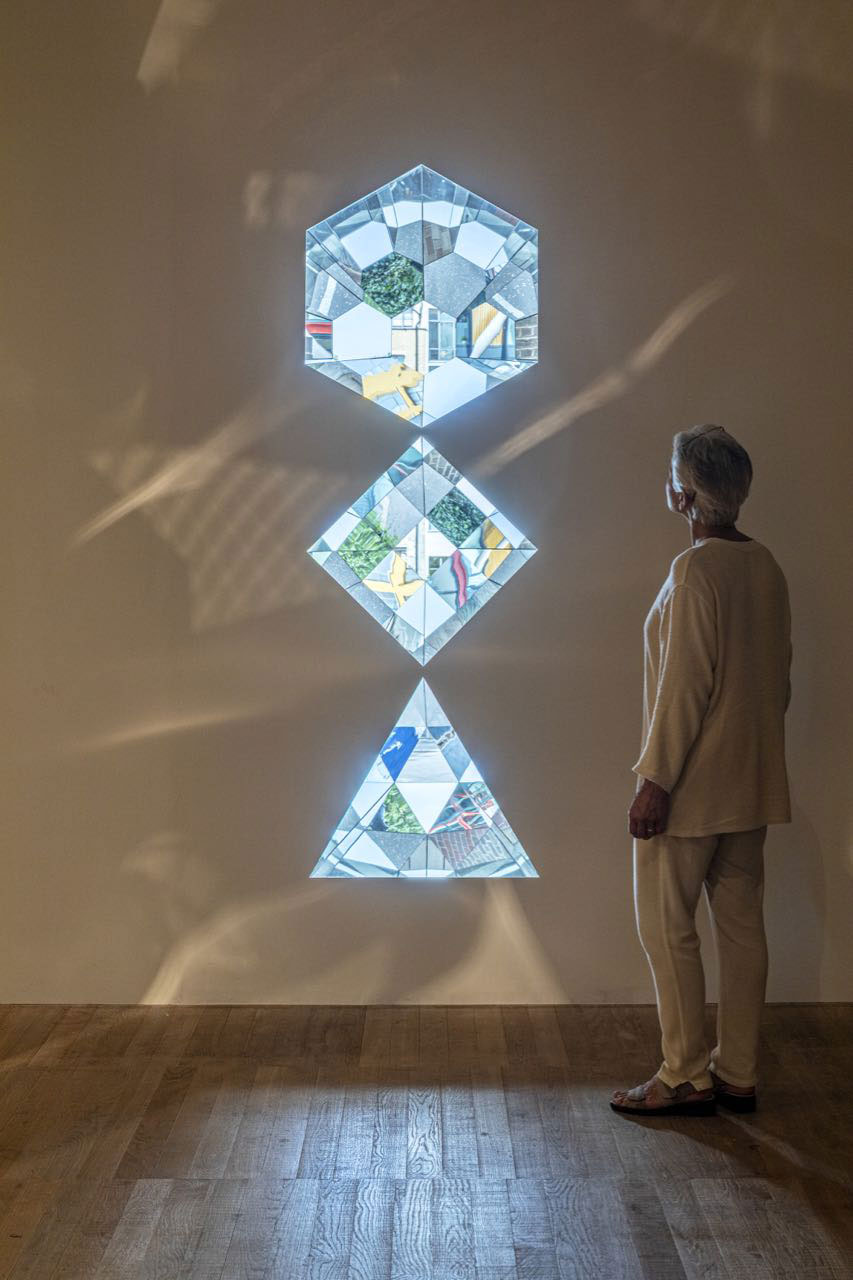 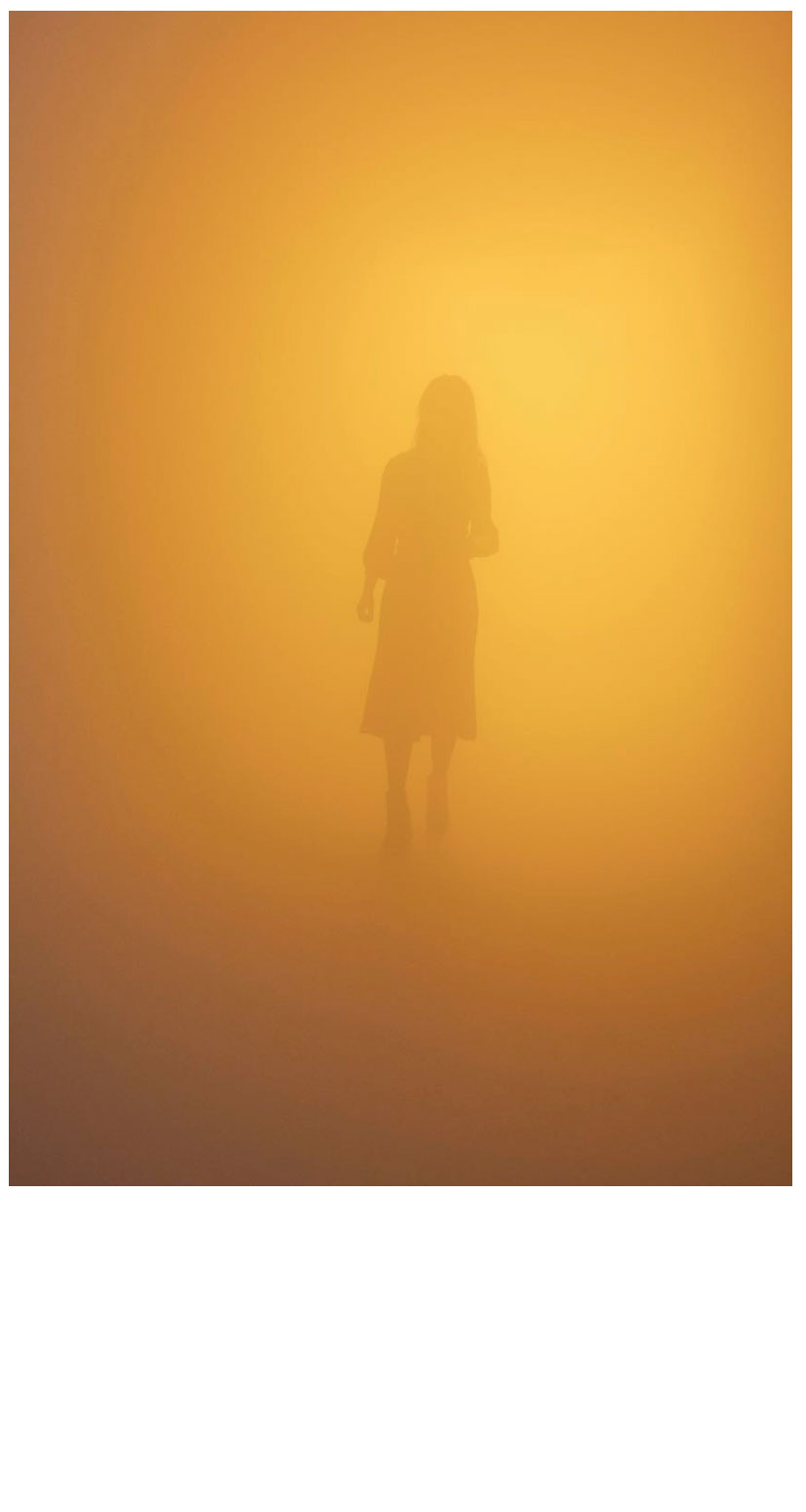 The weather project also provided Eliasson with a platform from which to build on. And build on it he has; from man-made waterfalls to mesmerising light installations, to high-profile collaborations with everyone from Ai Weiwei to IKEA, he has become one of the most recognisable contemporary artists in the world. Since that time, however, there has been no significant UK survey of his work. So for those who originally experienced The weather project, and for a generation who have come after, there is much to explore — or, as the artist and curators would hope, much both to explore and to get engaged with. Recently, just before the exhibition opened, I spoke with assistant curator Emma Lewis about Eliasson’s spectacular London return.

Trisha D’Hoker: Eliasson’s association with the Tate is quite a special one. Can you tell me a bit about that.
Emma Lewis: He accepted an invitation to take on the Turbine Hall Commission, which was staged in 2003. It was a major installation for us, because it really transformed the hall into a public space. It became somewhere people could go, and relax; it became very social, and it really impacted on how artists who have taken up the commission subsequently have thought about how to use that space.

TDH: And was it also his first big commission?
EL: It was a major commission for him; he sees it as a turning point as well. Prior to 2003, he had been interested in bringing the natural phenomena from outdoors into gallery space, but really, from about 2000, he started also thinking about the social, bringing it more and more into his work. And with the current social climate, his work is getting much more engaged, there’s a growing sense of urgency.

TDH: He engages us, he’s playful, but there’s a message.
EL: I think what’s important for this show is, for example, this engagement with the climate crisis; it’s not that the studio is claiming to have the answers, it’s saying, ‘What can we do to help?’ And we hope with this exhibition, by showing the artworks and looking at the research, it will give people a sense of agency. You can see, through some of the artwork here, how you can directly have an impact on the art — and through that, the wider world.

TDH: How long has it taken to put the show together?
EL: It’s taken about two years. A long time coming, but two years working on the exhibition itself.

TDH: I understand Eliasson has a large team; how does the process between your team and his work?
EL: The curatorial team — and our installation team, our publishing team, and even our press and marketing team — all work very closely with the studio. The people at Studio Olafur are from all different kinds of backgrounds and expertise: architects, archivists, administrators, art historians, designers. So it meant that at every stage of the exhibition-making process we had a team member in to collaborate with and work with, on sharing ideas and refining the show, from the very technical aspects to the more conceptual bits. 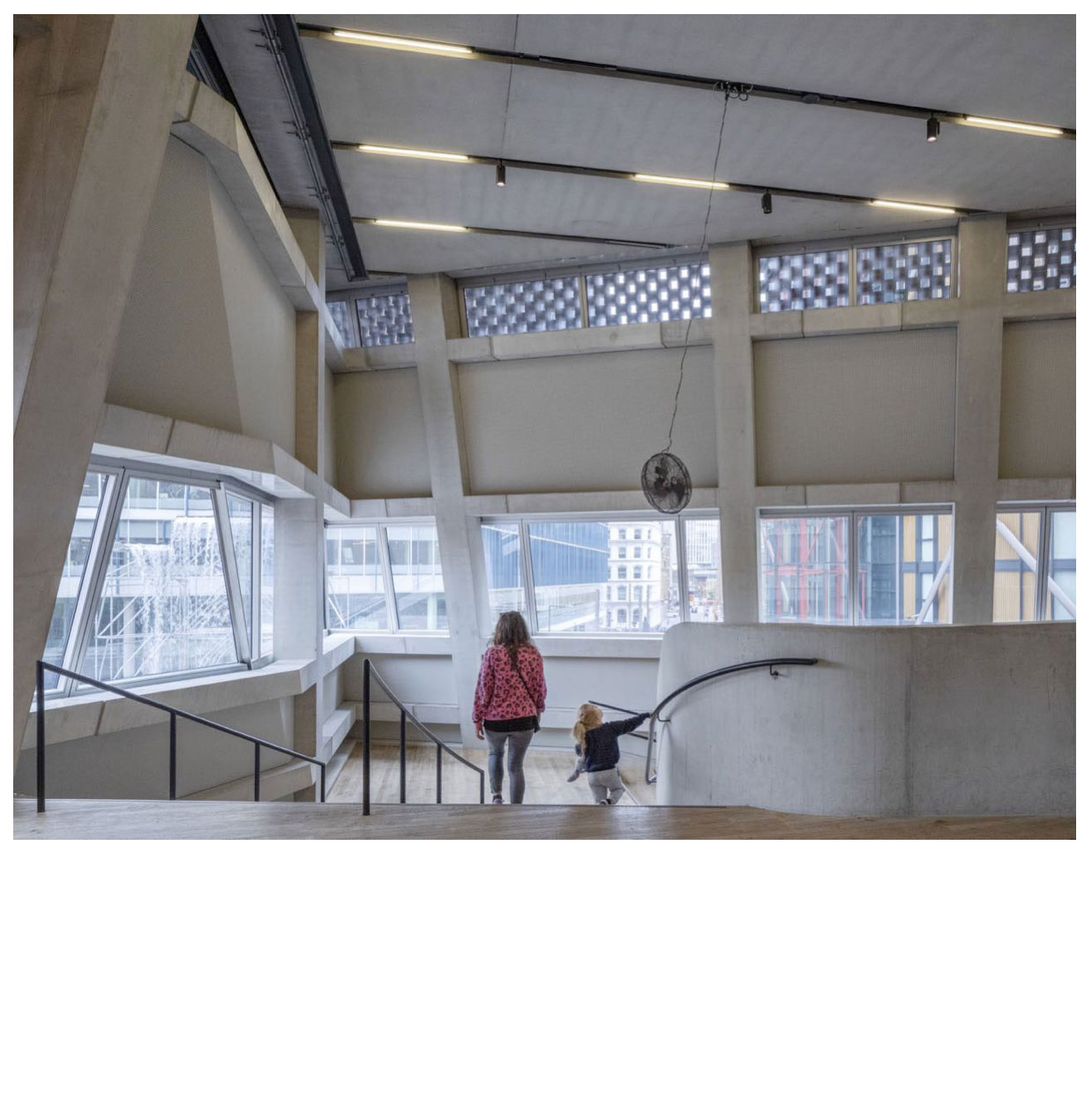 TD: What has your role been?
EL: I am the assistant curator for the exhibition. The Senior Curator, Mark Godfrey, and I worked very closely on the concept of the exhibition. And that meant really thinking about what we wanted to do with the retrospective. This is the first time Olafur has had a major retrospective in the UK, so first of all, we wanted to make a survey of his work, to show the cross-section of his practice from the Nineties to today. Something that Mark and I felt very strongly about was that we wanted to show Eliasson’s work in different fields, outside the works of art. So his engagement with the climate crisis, for example, his activities with migration and immigration, and his social business, ‘Little Sun’; all of these areas we wanted to really give a space to in the exhibition. That’s something that’s not been done before. But we felt it was so important in understanding his practice.

The last section of the exhibition is called The Expanded Studio. There, you can really get a sense of how the studio works, and the breadth and depth of their activity. There’s a pinboard that shows you all the different areas of research they’re undertaking, all the different things they are looking at. It’s such a big area of their practice; you will see in the exhibition how Eliasson and his team really work with key thinkers and policy-makers today, whether that’s politicians or activists. We think that what really distinguishes Eliasson is that he’s created a new model for being an artist in the 21st century. In part, that’s to do with the way his studio works — different people, with different expertise — and also the way he is very actively engaged with lots of different fields. It’s what he, as an artist, brings to those fields, and it’s also the way those fields inform his art.

TDH: Was his background always in art?
EL: He has come from an artistic background, but increasingly, especially since the noughties, he’s become much more active in fields beyond art. It was a gradual change, but with his increased visibility and activity as an artist, he was able to move in those new directions. And he had the privilege of meeting all kinds of different and influential people, and chose to use those platforms and opportunities. For example, someone you will see represented at the exhibition is Mary Robinson, the former President of the Republic of Ireland, who is very active in policy-making and with issues around the climate crisis. So how his relationship with her, and their thinking together, has influenced his work — this is another aspect of his practice that we wanted to show.

TDH: Tell me about the food collaboration.
EL: Tate Modern’s collaboration with Studio Olafur to create a menu at the Terrace Bar represents his long-term interest in food, certainly from a health and nourishment, sustainability point of view. But also, his father was a chef, his sister was a chef – he sees it from a well-being, social point of view as well; his studio all sit down and eat together every day. 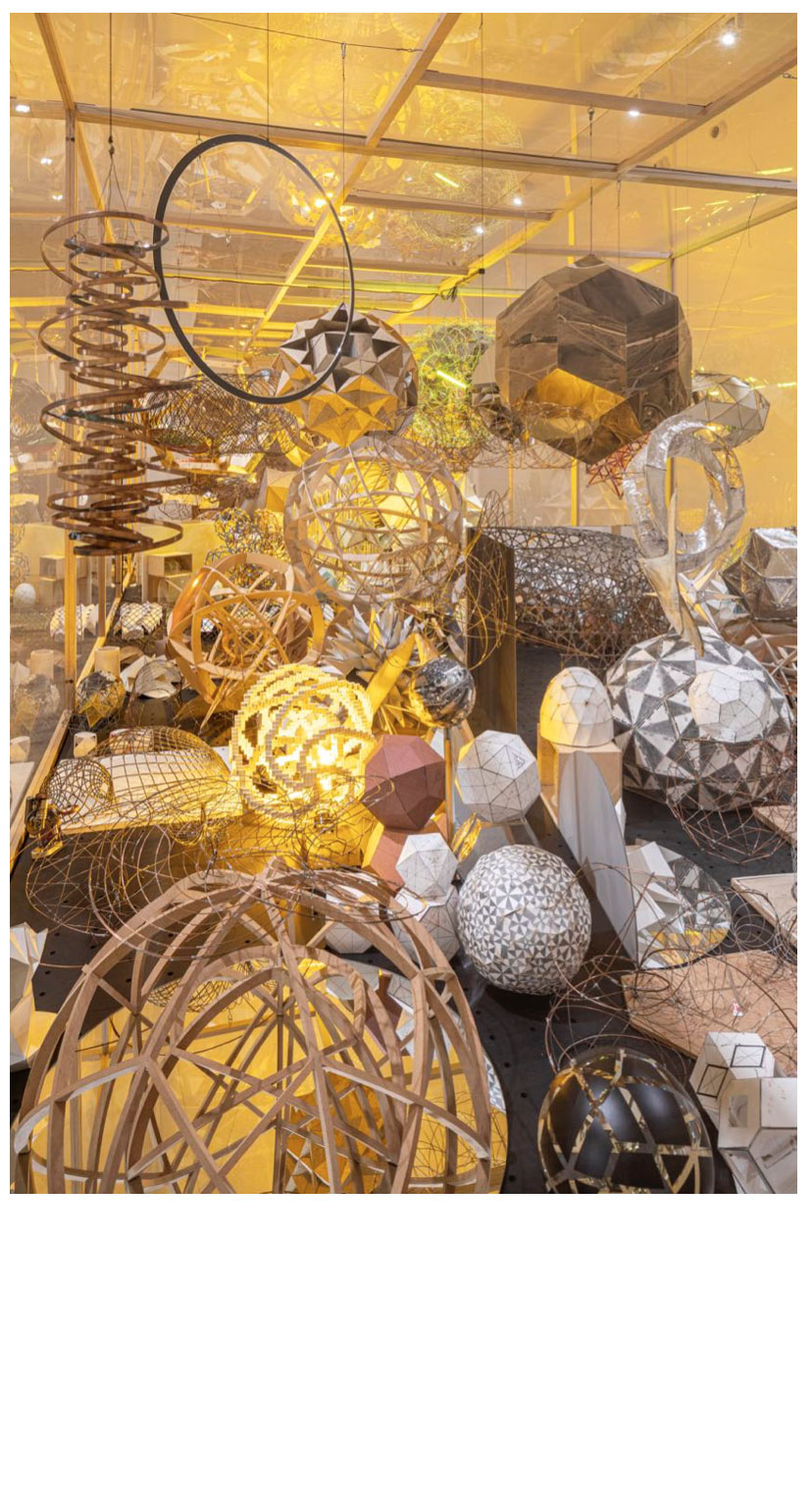 TDH: And there’s a book, too.
EL: Yes, there’s a catalogue out for the exhibition. And again, we wanted to really foreground his engagement with people from different fields. So, for example, you’ll be able to read his interviews with many different leaders, from architects to hip hop pioneers. Here is an artist who is eternally curious.

[Looking at one of Eliasson’s early works, Ventilator (1997)]; That is a good example of how, early on in his practice, Eliasson had minimal components, and very, very simple ideas. But he wanted to see how you could create a shared or collective experience in a public space. It’s an office fan, suspended by a wire. It rotates, and occasionally it moves quite rapidly; that’s it. And you can see how this idea translates in his later works as well. Like Shadow (2010) – the installation is activated by one person, but really comes alive when multiple people participate.

One of the first rooms in the exhibition (although Eliasson’s works spill out into the concourse, and beyond) is Model room (2003) —where a giant vitrine sits, full of the geometric models and musings that have resulted over the years from his work and collaborations. The last room, meanwhile, The Expanded Studio, is one of the busiest and buzziest. At one end, a large table full of Zometool construction sets was being worked on by kids and adults of all ages; at the other end, a table full of tangible products, from the real world outside. Hands-on, message clear; this involves us. The long pinboard was full of the thoughts and quotes and articles collected from the studio team, and full of people in front of it talking, pointing and snapping photos. Videos of current projects and ongoing discussions between Eliasson, the team and a host of collaborators are spread around the room. It’s a room full of energy, optimistic and inspired – not for having found the answers, rather for the kinetic commitment in looking for them, together.

When it comes to looking for meaning in the work, Eliasson wants us to look to studio practice along with the art itself. As artists and collaborators use studio practice to find and establish meaning, he feels a responsibility to be more open – taking the studio out into the world, as well as bringing the world inside the studio. Studio Olafur Eliasson, founded in 1995 and located in Berlin, could not be further away from the romantic notion of the artist toiling away in a smoky garret; the events taking place alongside the exhibition over the next few months include tours and talks around sustainability, migration and architecture, looking forward from the themes and issues surrounding the retrospective.

This sense of participation and responsibility permeates the exhibition, asking us to think differently — to become active participants, not just in the exhibition, but beyond; fostering a heightened sense of your own self in the world, but also an awareness of others. Eliasson sees studio practice as having an important function in the creation of art, not just in the production. Highly adaptable from the beginning – a sort of inconclusive experiment, he has called it, where they are not seeking answers so much as attempting to define questions – in order to generate more questions, more dialogue.

Later, I went to see the exhibition again with my 25-year-old daughter. She came away thinking about the absence-presence dichotomy – the idea of absence being constantly shaped by what is present. One of Eliasson’s new sculptures, The presence of absence pavilion (2019), elegantly captures the concept. But you can also see this in the artist’s deserted Icelandic landscapes, and in the geometrical constructions found throughout. 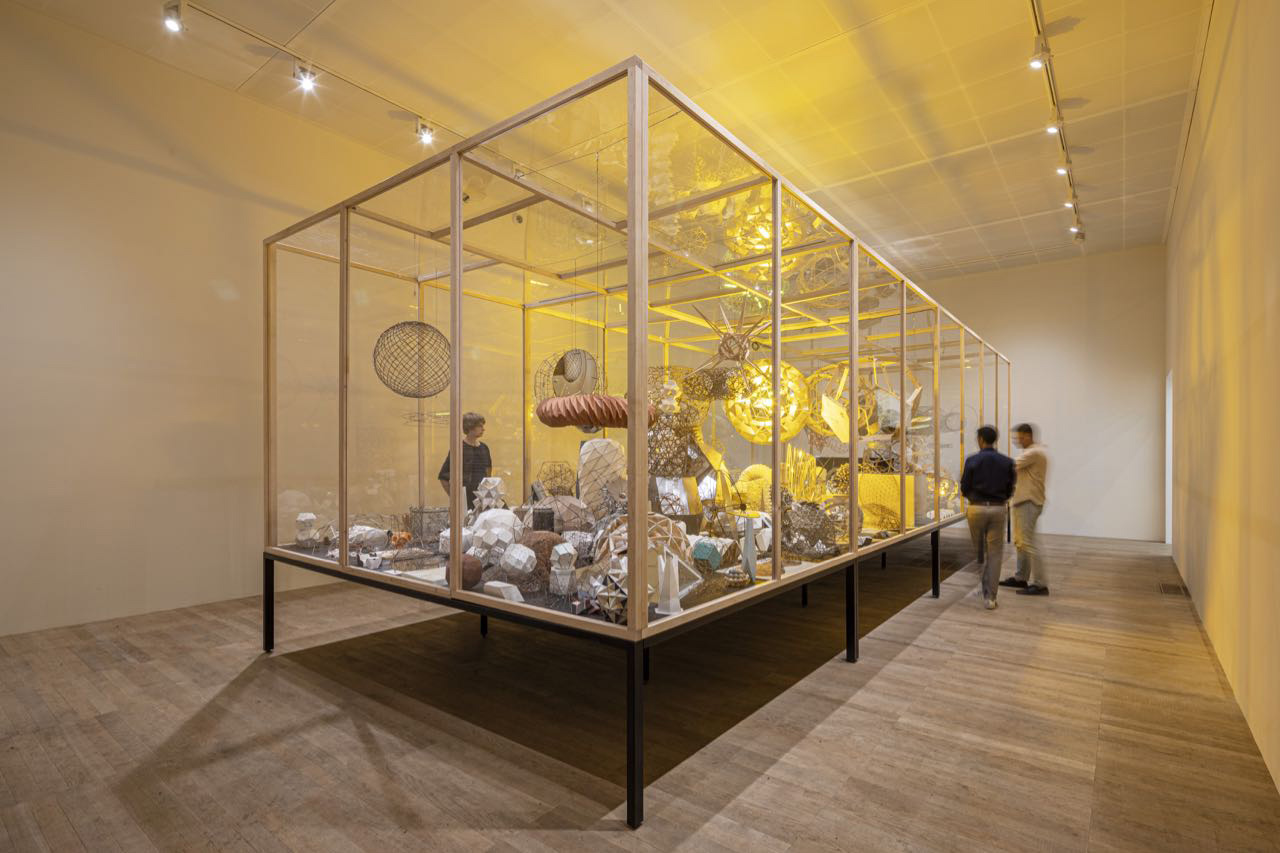 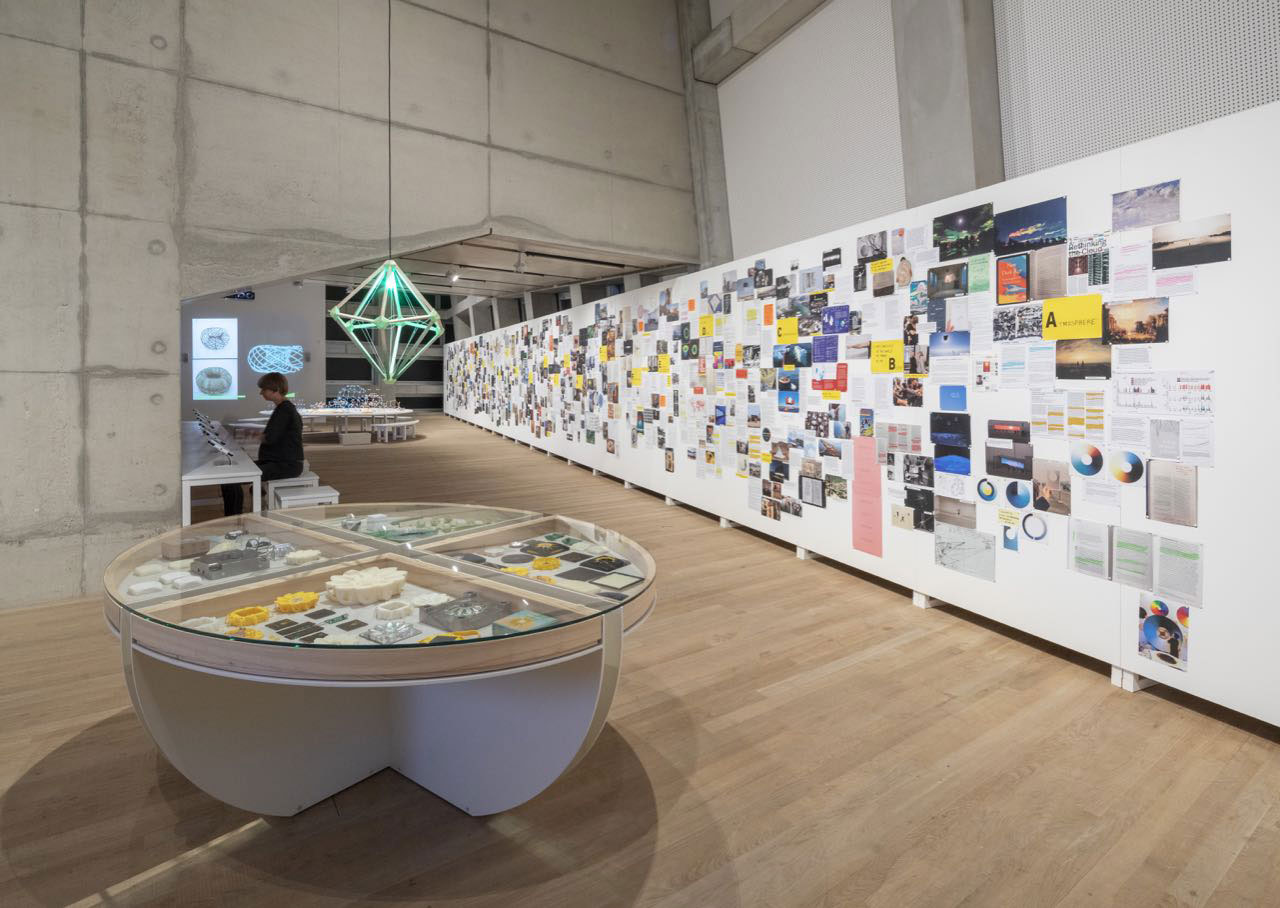 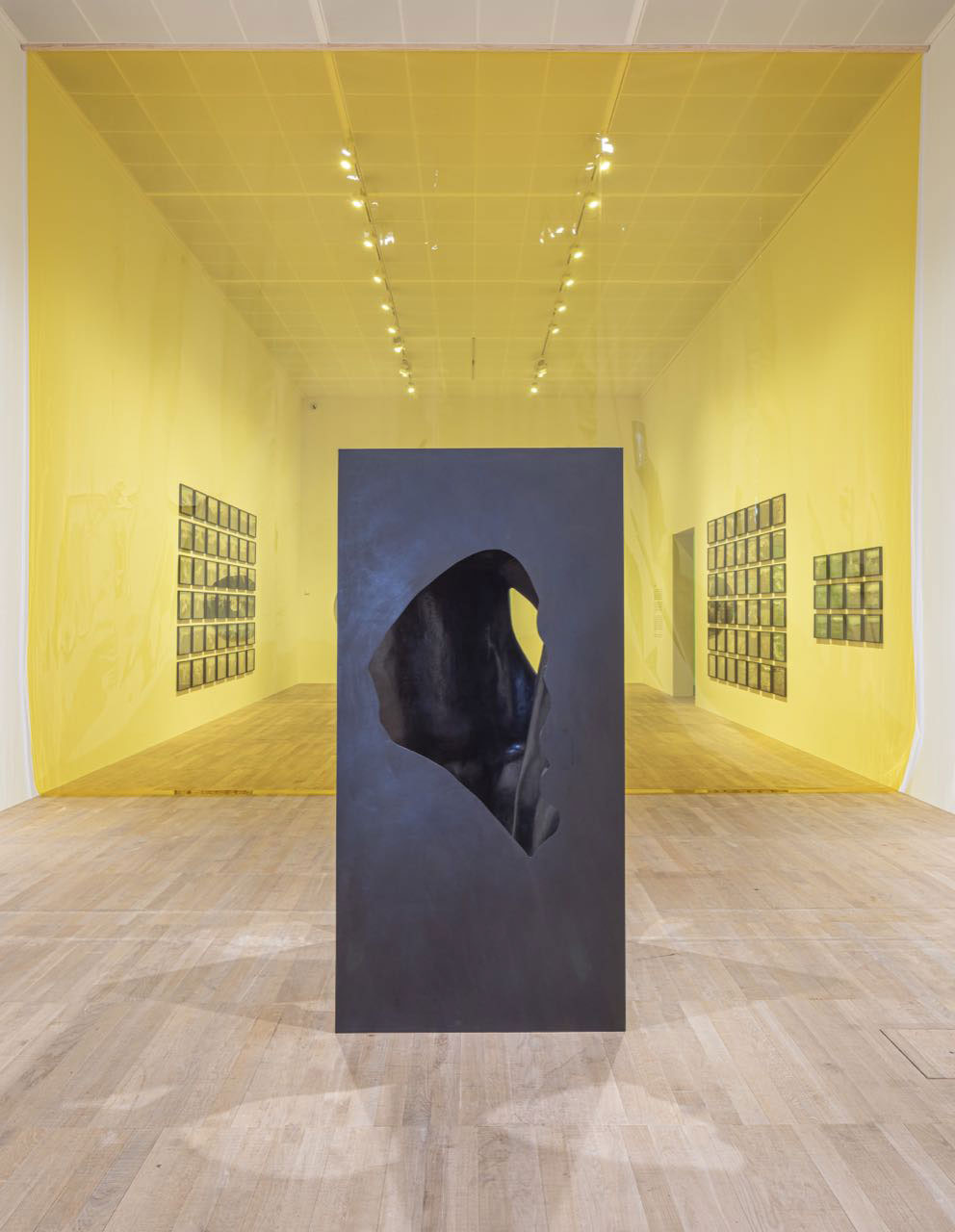