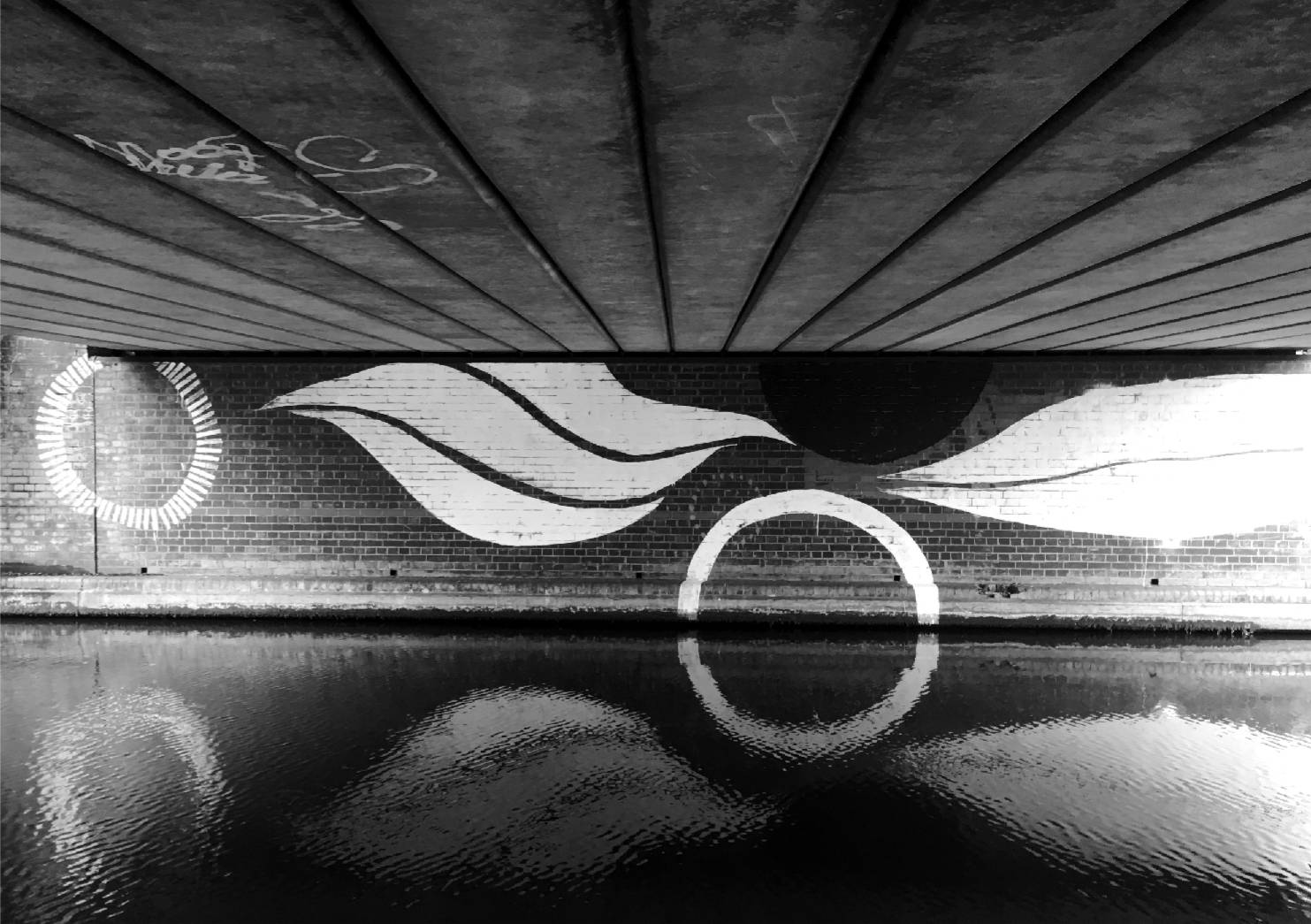 "Birmingham By Pass", 2017
Installation at Centrala Gallery Birmingham, with murals along the Grand Union Canal. 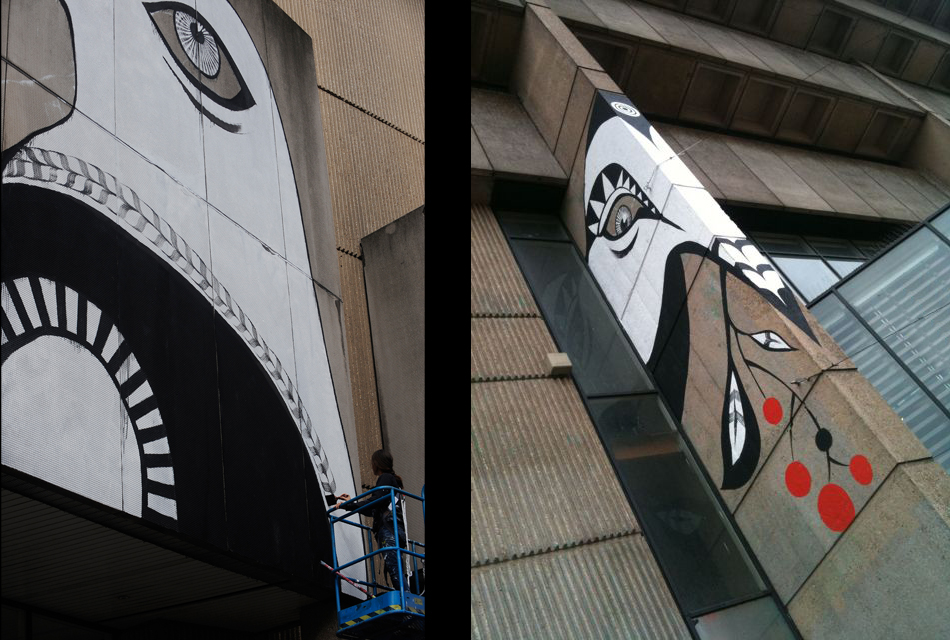 Anything Is Possible, 29th July 2010
The Central Library in Birmingham
(Architect: John Madin)

Trisha D'Hoker: Can you tell me a bit about how your current exhibition UNFOLD developed?
Lucy McLauchlan: I make the majority of my work away from my hometown — and recently, I made a conscious decision to change this. And so began my ongoing explorations. It started in the urban woodland area, which I was surprised to find had not changed for many years; a green oasis within the concrete, despite the city having undergone massive redevelopment. I decided to take some large 9 x 3m rolls of canvas to the woodland, to a part of the city that was in the middle of change and was also a place that I personally connected to more than any other: the Central Library and its immediate surroundings. I had painted this building many years ago — a John Madin design, that I feel should have been listed (the building has since been demolished). But back in the woodlands; I dragged the canvas around the site with my sledge full of paint, capturing imprints in order to create a permanent record. These then developed into a larger commission for The New Art Gallery in Walsall, Not Forgotten.

I’ve also paddled the waterways of Birmingham to create similar works. In between, I have still been creating many works abroad — installations and murals on display for other places. And I felt it was high time for me to bring these together and present them back in Birmingham with this show.

TDH: As for the subject matter – do you know before you start what this will be?
LM: Not at all. That is part of the process I encourage. Much like my murals, I let the space and environment dictate to an extent, and then allow the brush marking to take over, developing a rhythm of action and reaction. Also, the paintings develop as I’m painting, dependent on each situation. External factors that influence it are not just the weather, the surface, how far the cherry picker will reach. But also who I meet, the conversations we have, the new perspective I glean from being physically present in a situation for a couple of hours — where a stranger feels happy to engage and where from my boat, ladder or pavement, I have the time and space to see another side which I may have missed just walking by. 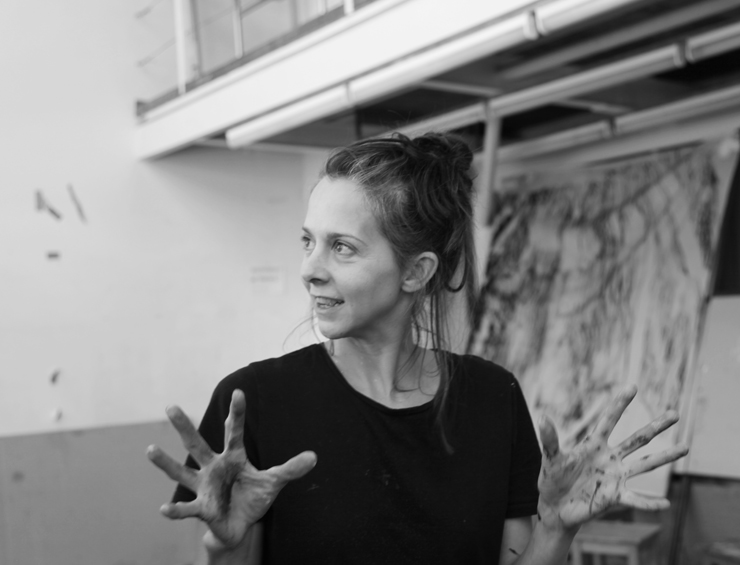 TDH: You’ve been concerned with, and associated with, the idea of art for all — which seems to extend to the creative process as well. Can you explain how this influences your work?
LM: Yes, that’s where I started; painting outside with friends, giving people a change as they pass. There’s an immediate response, good and bad — something I don’t get when working in studio. I also started out making my own screen-prints, as an affordable process for both me and someone interested to buy. This is when Banksy had just set up Pictures On Walls; he invited me to join POW, and the later Santa’s Ghetto (etc) shows. This led to being represented by Lazarides Gallery. They all had this same ethos.

I continue to make my prints, releasing them myself. I made a set from my time in New Zealand, where I created an installation at the Tauranga Art Gallery & Museum; I shall be releasing the last print from this collection this week. I also make prints with Studio Cromie, run by an Italian with a definite and original DIY, strong art for all appreciation. He established the first street art festivals but with a refreshing non-commercial attitude. I was recently back in Puglia with Studio Cromie, going back to walls I’d painted years ago, with the intention of capturing their surface and turning them into prints (which we’ve just released).

TDH: I see your work as an example of art speaking to the environment into which it is created. I like the idea of this mutual exchange, this dialogue, with art being uniquely placed to speak where normal channels may not be available or effective.
LM: On one occasion, I was commissioned to paint a mural inside a gallery space. Somehow this just isn’t the same, so I went outside to gather rubbish and discarded items and bring them inside to work into the painting. I went through a period of furthering the life of all the daily detritus I was seeing; painting them and replacing them, outside and in.

TDH: How would you describe your current practice — and how do you see it as different or evolved from previous work?

TDH: You are known for creating on location, in situ. Does the inspiration then come from the moment? How does it start for you?
LM: Perhaps the set of three canvas works I made for my installation at the Moscow Biennale (also in this show) are a good example. I took my canvas across the city, but I wasn’t feeling it, and soon discovered a much more interesting side to the homogenised wealth of shops and shoppers: Moscow’s own hidden treasure, in its inner city national forest. Getting away from the touristy centre, I was able to get a better view, and could see the layout of city — the concentric circles of ring roads (much like Birmingham’s own town planning) and the clear divides of wealth. This trip also gave me time with our local guide to really understand the views of a young person growing up in Moscow now, in this political and media-charged moment. It was 2018, so post-Trump election, and around the time of the Novichok poisonings in UK — all of which ultimately fed into my final designs.

TDH: Location is obviously one determining factor. But are there other parameters within which creation is allowed to happen?
LM: Reach and accessibility. Carrying a brush rather than a spray can get me further in sense of people leaving you alone; less threatening connotations attached, I guess. Taking a sledge to carry paint and modified large brushes isn’t just practical, but also catches people off guard slightly. Then it’s a case of looking for places that grab me, and where in turn I can grab moments of them. Carrying ladders isn’t always practical, so I pick and choose my battles, depending on what I’m really trying to gather and say. As with painting outside, I try to maintain a pace to capture an essence.

When I was making the work for NAGW, I took the canvas back into the gallery space to work back into the imprints — something, fortunately, the gallery’s large floor could accommodate. This is what initially led me to paint outside; the need for space to allow big brush movements, with free and open access. That’s something I’ve continued with the canvas works now; I have a studio, but it wouldn't fit a 9x3m canvas.