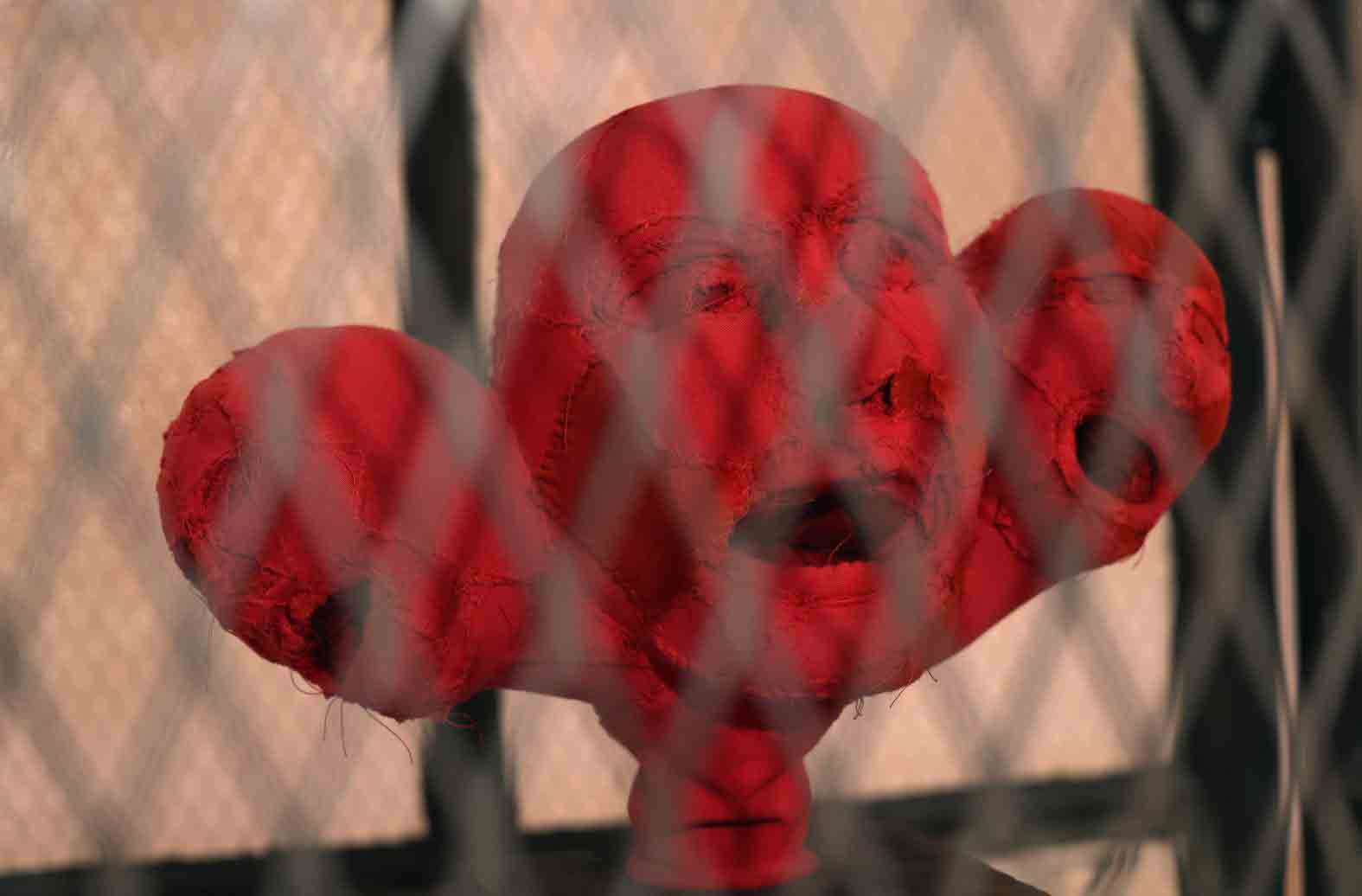 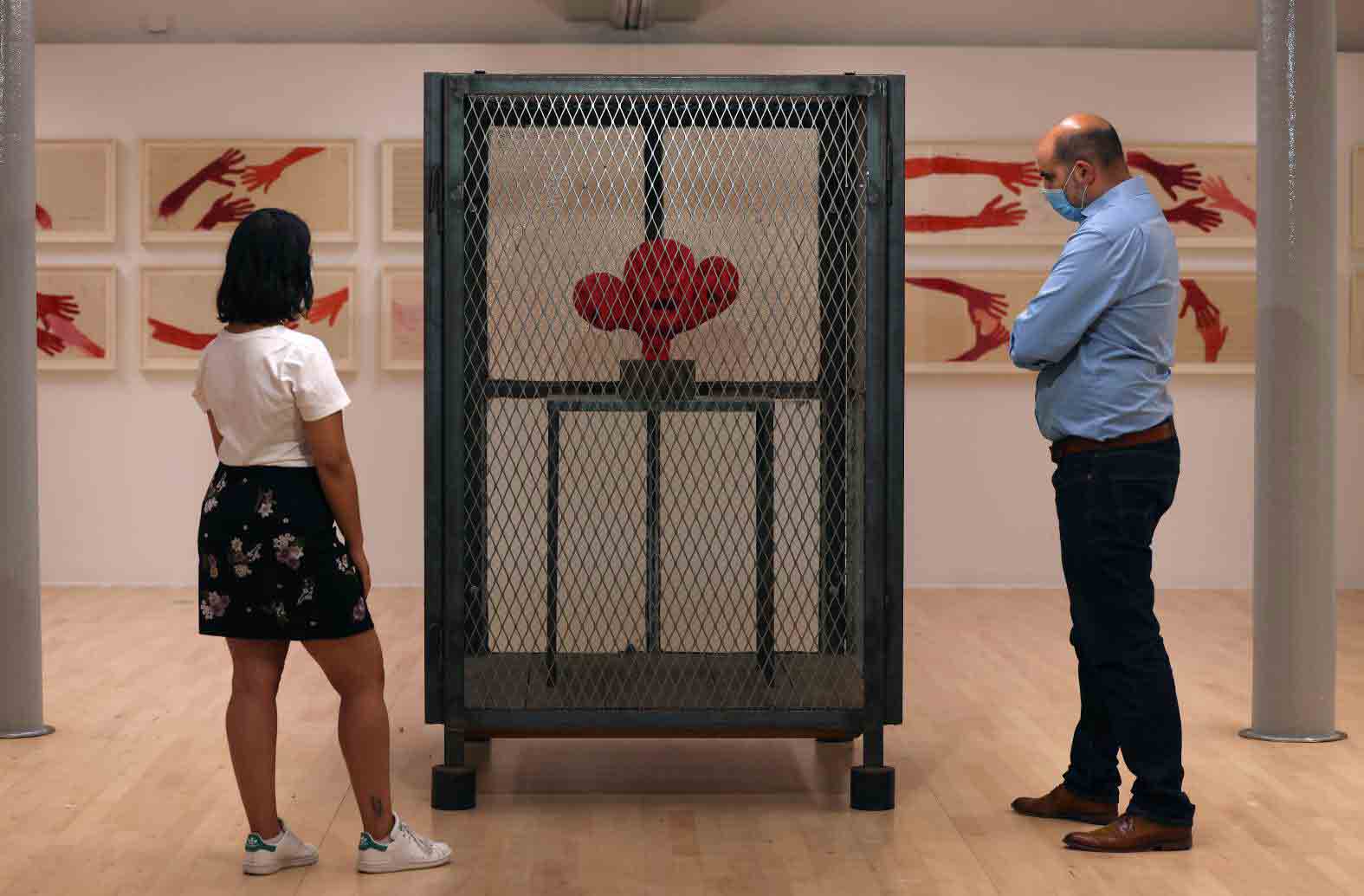 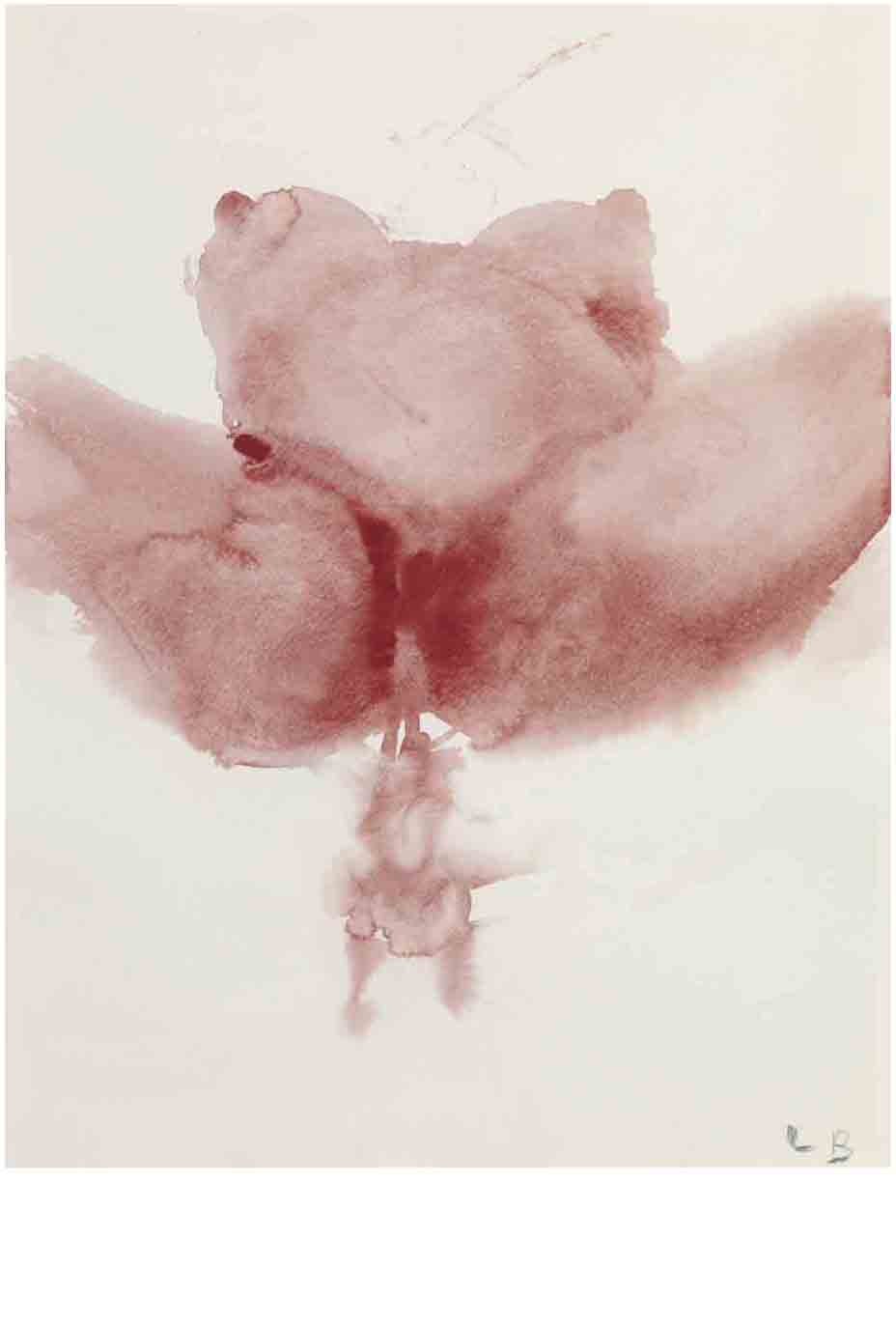 Presented by the Tate Americas Foundation, courtesy of the Easton Foundation 2016.

We recently visited Tate Liverpool and spoke to Assistant Curator, Tamar Hemmes about the exhibition.

Trisha D’Hoker: Why Louise Bourgeois and why now?
Tamar Hemmes: We have a wonderful collection of Louise Bourgeois’ work and it is work that is still relevant today, and will remain so, because of the topics she addresses: fear, isolation, depression. For a long time, people weren’t quite ready for her. She didn’t really become famous until she was in her seventies, and I think that is because she was so incredibly honest about these topics, which are still taboos even now. Things like post-natal depression. Bringing her works to Liverpool and having these conversations now is really important.

TDH: There is a poem, The Right Kind of Blood (Monika Radojevic, 2021), about how blood on the battlefield is celebrated while menstrual blood is not, and this is what came to mind seeing some of Bourgeois’ pieces here, similar to Tracy Emin in this respect – the use of the body to explore what it means to be.
TH: It’s incredible isn’t it. Usually you think of childbirth as a positive event, but when it’s shown in a more honest or realistic way, all of a sudden people don’t want to see it. Bourgeois takes something like motherhood that is usually seen only as a positive and shows the different sides to it. The anxieties she personally had about motherhood – that is the strength of her work. All her work draws from her own personal experiences. She doesn’t pretend in any way. She never hides behind anything; she puts it all out there. Then to put these works on display in a gallery – it’s a vulnerable position to put yourself in, exposed to people’s criticism and judgements. But I think for her it was a way to show her strength as well.

TDH: Expectations of motherhood run deep. Was she the first artist, or one of the first, to take on these subjects in this way?
TH: Probably one of the first do it so openly. I’m sure she would have been heavily criticised for it in her time. But I think what is so interesting is she doesn’t just do it with motherhood. She looks at people in general and the different aspects of personalities and how we can have these conflicting emotions and have them at the same time.
You will have seen this work called Cell XIV (Portrait) (2000) in the centre of the gallery with the three heads that have these very anguished looks on their faces, looking as if they are almost being pulled apart. You can sort of relate to that when you have feelings yourself that you cannot quite unite.
Similarly there is a sculpture of two hands connected to each other, one is an open hand and one is a closed hand. It’s called Give or Take (2002). It also has that same duality we have within ourselves: we may want to be generous on the one hand but feel closed off on the other. It’s this duality she sums up so beautifully in works that are both aesthetically pleasing and incredibly tactile. A lot of art, especially contemporary art, might have very strong meaning, but looking at them may not be such a pleasant experience. Bourgeois manages to do both. And you can relate to them on a personal level, which is really where her strength lies. 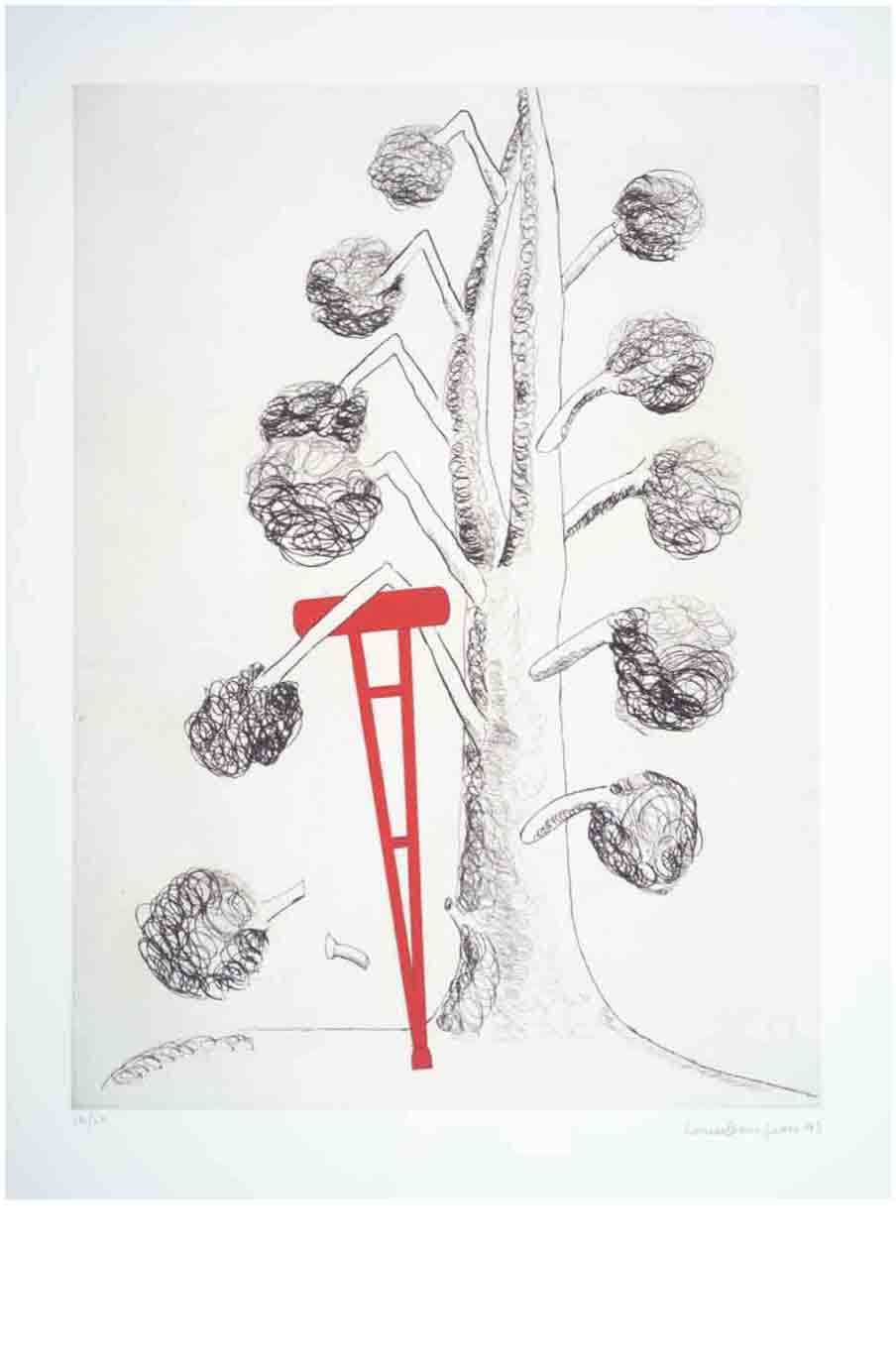 TDH: I really enjoyed The Family (2008) and the series in red, with the mother, the feeding, the birth. So much detail from what appears to be so little.
TH: There’s not a lot of very specific detail, but it really conveys what she thinks about a topic. The works you’re referring to are all very similar but slightly different and you get an entire story because it’s about life and rebirth – the cyclical nature of life. There is just so much in those pieces. Some of them are quite tender, like a baby feeding. Then with others you can see a kind of trauma in them – more like something is being taken away from a woman.
The colour red was very important for Bourgeois; she used it a lot and spoke about the different sides of red. It is the colour of love and passion, but also the colour of danger and pain and blood, which, as you say, can be interpreted in very different ways. This ties in with her interest in psychoanalysis and the therapy sessions she went to for thirty years, unpicking the layers of herself. Which is what she does with her work. She produces something then looks at what it actually means.

TDH: I read that for most of her career her work had a lot to do with her father, and only at the end did it become about her mother.
TH: She had very interesting relationships with both parents. She grew up in the suburbs of Paris, where she initially seems to have had quite a pleasant life. The family had a tapestry restoration business and Bourgeois recalled sitting outside in the sunshine under the trees by the river helping her mother with the stitching and sewing – which you see later as an obvious influence on her work with the fabric sculptures. But her mother contracted Spanish Flu when Louise was around ten years old, and never really recovered. So there was a role reversal, until her mother passed away in 1932, with the child having to look after the mother. What you see in Bourgeois’ later work is her love for her mother, but also the resentment for her lost childhood.

As for her father, Bourgeois absolutely adored him. Later, after all the psychoanalysis, all the therapy, she felt that she had been in love with him. While obviously that is a very Freudian approach, she did have this adoration for her father and really put him on a pedestal. However, when her mother became ill, the family hired a governess from England to come help take care of the children and Bourgeois’ father began an affair with her. So there was a lot of betrayal, which brought about a huge conflict of emotion because that adoration continued at the same time Bourgeois felt betrayed and left behind. As a consequence, she developed a real fear of abandonment that stayed with her throughout her entire life.

You see it in a work like 10am is When You Come to Me (2006), which is about Bourgeios and her studio assistant, Jerry Gorovoy. And even though Jerry was also a very good friend of hers, by no means was Bourgeois an easy person to be around; she was very spiky and could really lash out. She was also very dependent on Jerry coming every day at ten am, when he sort of held her hand and helped her through her day.

TDH: The hands were very interesting; they could be so many things – reaching out, holding back …
TH: Exactly. On the one hand they seem very supportive but also some seem to be pulling apart. Which I’m sure is exactly what their relationship would have been like because she would have tried to push him away and pull him back in. 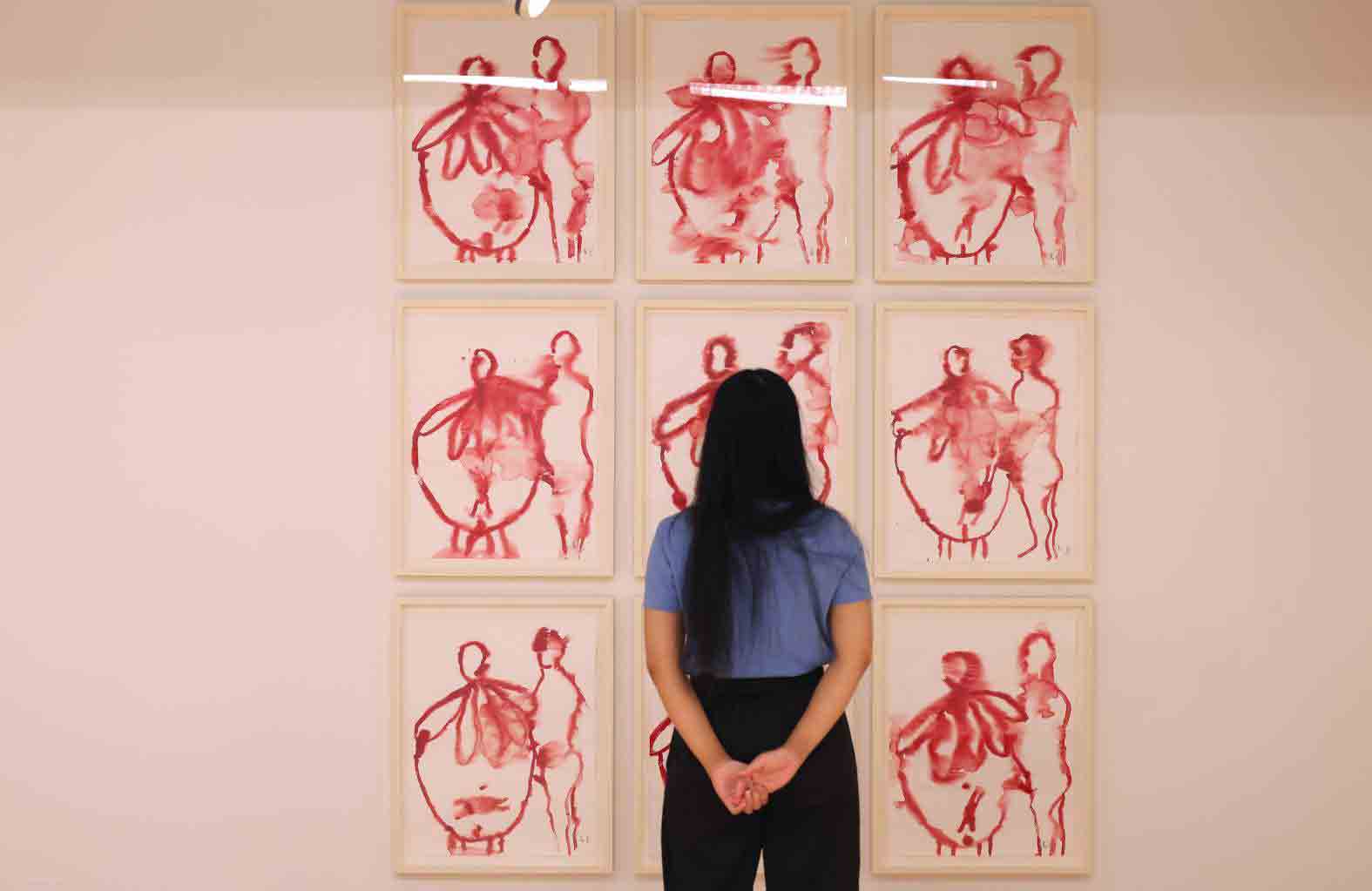 TDH: Fallen Woman (1981) was another really interesting piece.
TH: It’s turning a woman into a baton. Bourgeois looked a lot at how women have been portrayed throughout history. The idea of the fallen woman or the arch of hysteria – these are about women being vulnerable and being blamed for things. Bourgeois, of course, looks at it differently. Women are strong. Women have their own emotions and should embrace them. So on the one hand you have this head of a woman at the end of a long carved piece of wood, and she is helpless. She can’t move. She can’t pick herself up. She can’t do anything. But at the same time, it’s also a baton that you can pick up and hit someone with. So there’s a strength or a violence to it. That contrast.

The arch of hysteria can be seen in the fabric sculpture, Single II (1996), and the three arched blue works on the wall behind it. For Bourgeois, this arch is not about hysteria or helplessness or pain; it’s about sexual pleasure. Something I didn’t notice at first, was that on the one side there is male genitalia and on the other side where the head is meant to be, there’s a vagina. When you think of replacing the head with the vagina it could be mean so many things. Is it saying the woman is the rational figure, as opposed to how she has been portrayed as the emotional one. Again, so many layers. Sometimes you just need to unpick these things for yourself.

TDH: Spirals (2005) are different from the other pieces on display.
TH: Before Bourgeois began focusing on art, she studied mathematics at the Sorbonne in Paris. In the spirals you can still see that mathematical thinking, whereas in so many of her other works she has stepped away from that and gone into more organic shapes, looking more at the natural world. She also relates these spirals to childhood experiences, talking about the spiral as something that reminds her of wringing out fabrics in the river. And, later, how she would dream of wringing the neck of her father’s mistress, her governess. So again, all these different influences feeding into her work.

TDH: What is the Shape of this Problem (1999) seems a fitting way to start the exhibition.
TH: It is that great combination of the visual expression of her thoughts and her language. One of the phrases is ‘Art is the guarantee of sanity’. Every Sunday, Bourgeois would open her studio to anyone who wanted to come along – but they had to bring a piece of their own artwork to show her. You can imagine how scary that would have been. One of the artists who comes along says how it’s a struggle to be an artist. At this, Bourgeois is infuriated. She says to think that is idiotic. It is a privilege to be an artist. Art is the only way to stay sane because it allows you to explore your own emotions, your own feelings and gives you a way to express yourself. 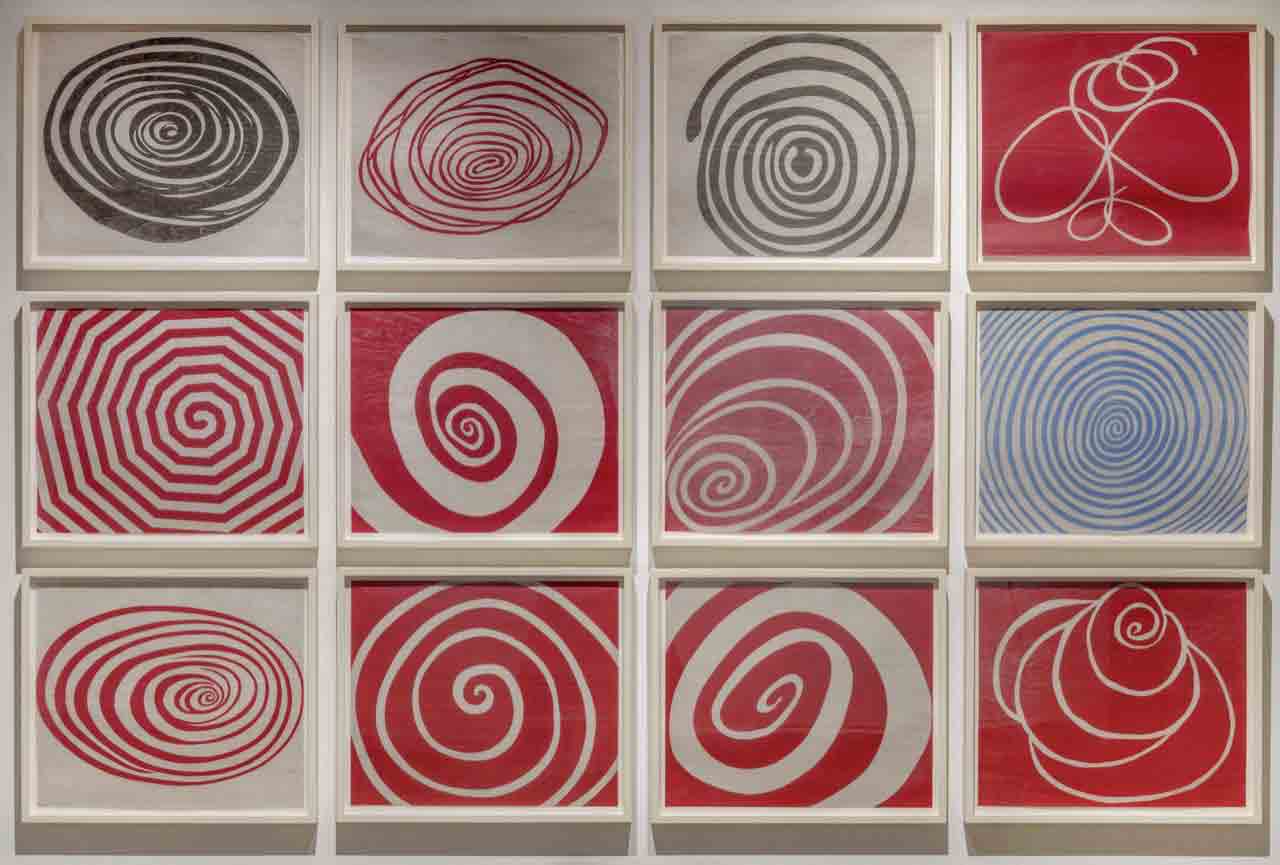 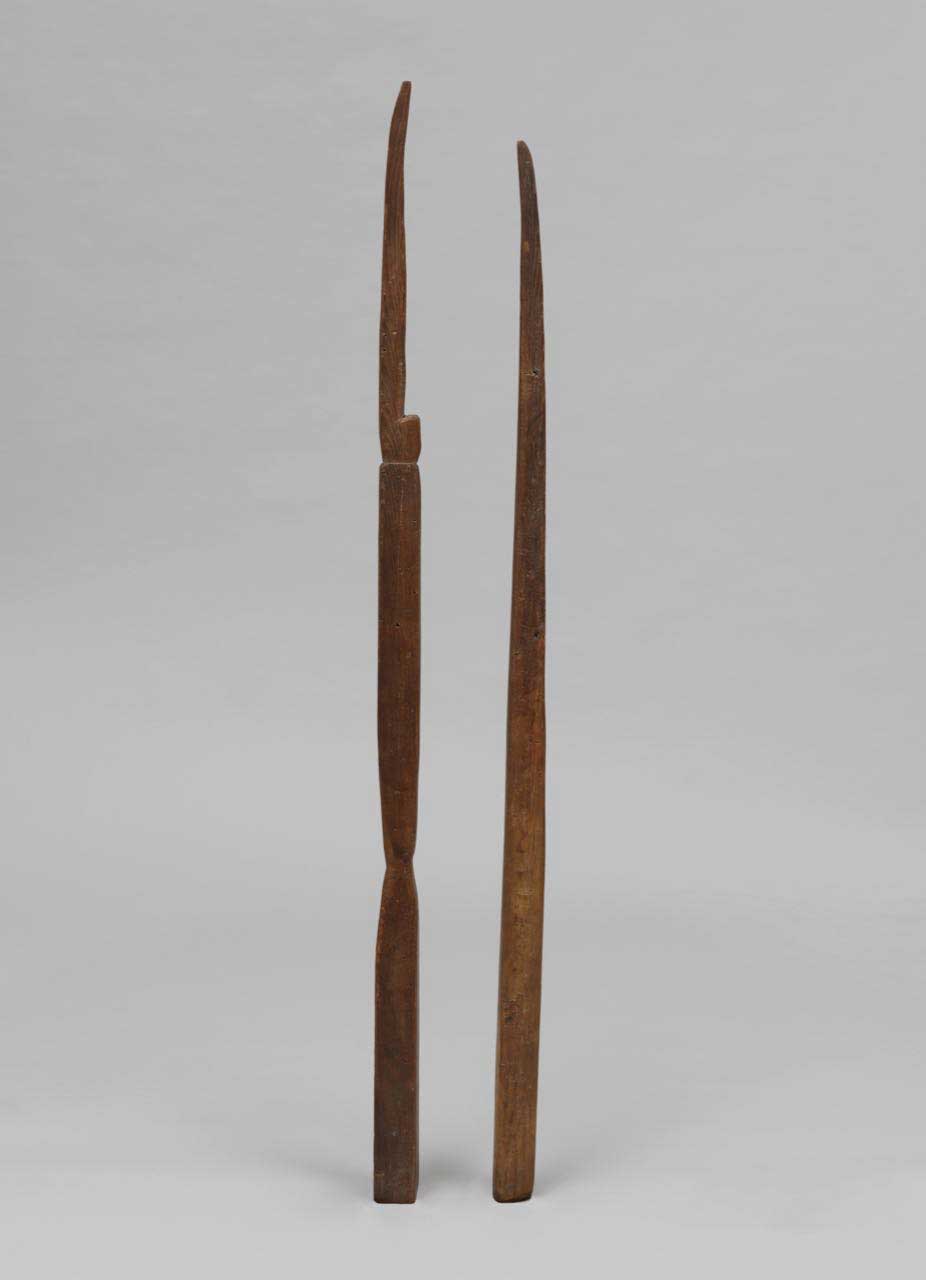