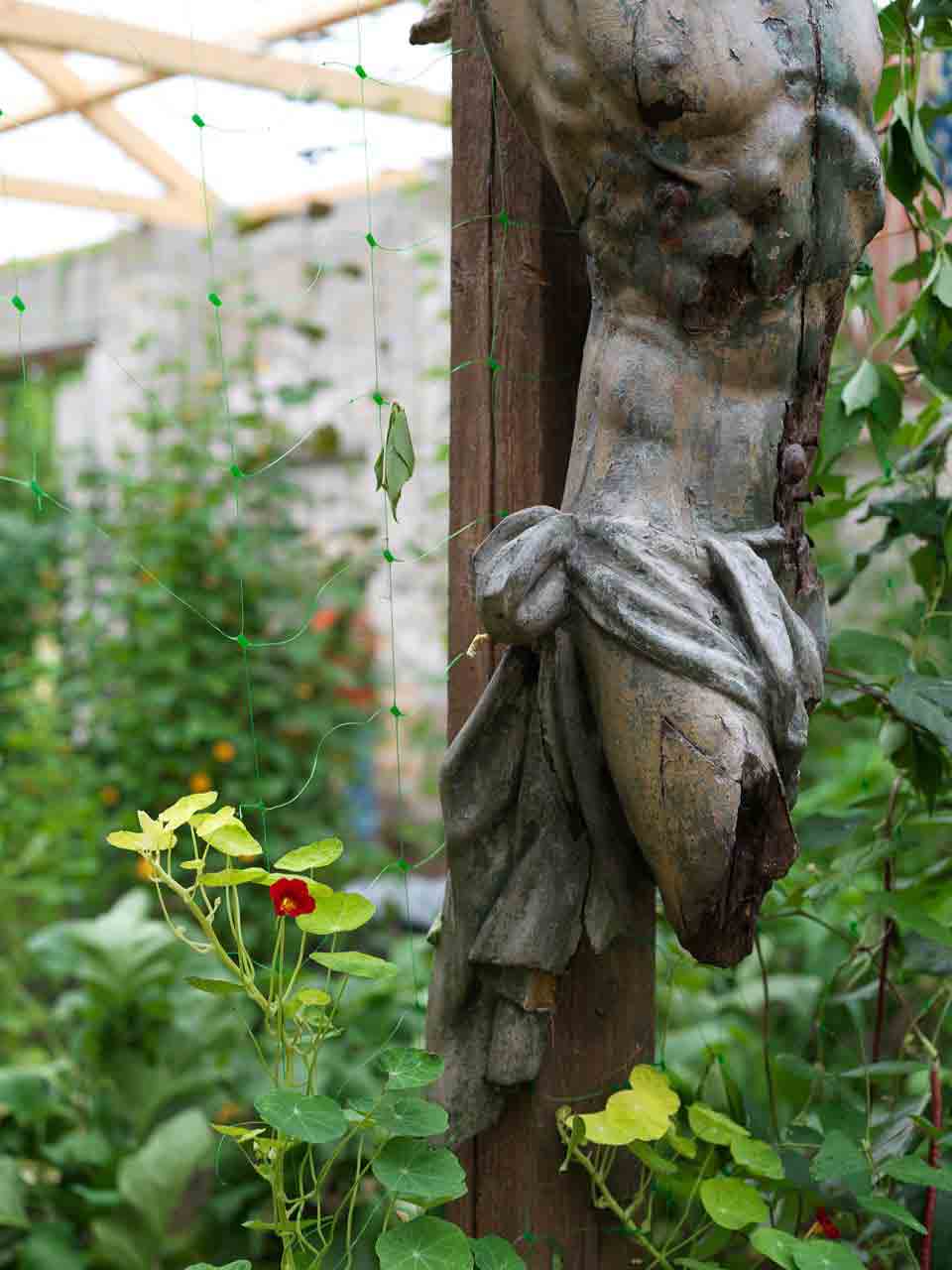 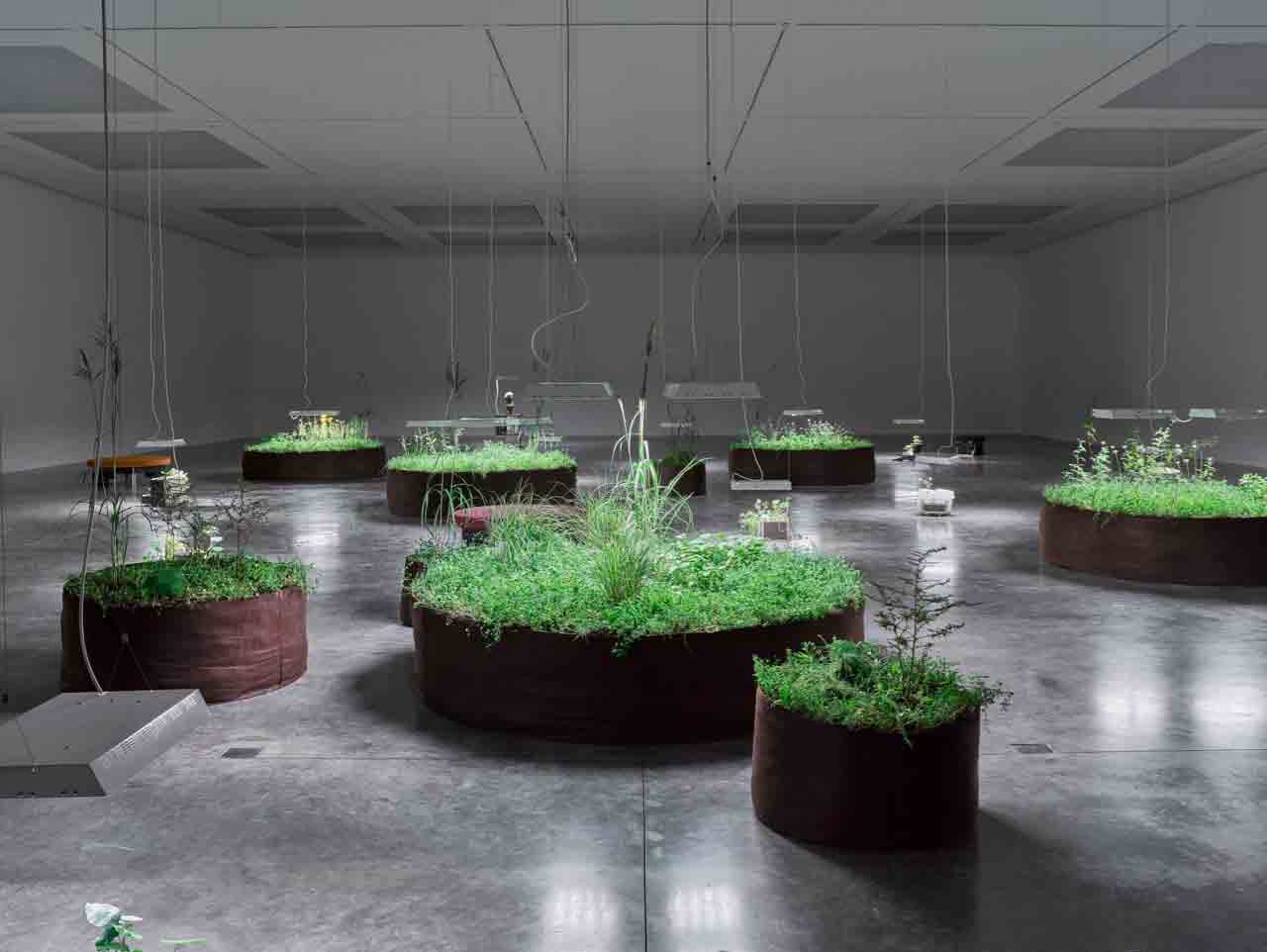 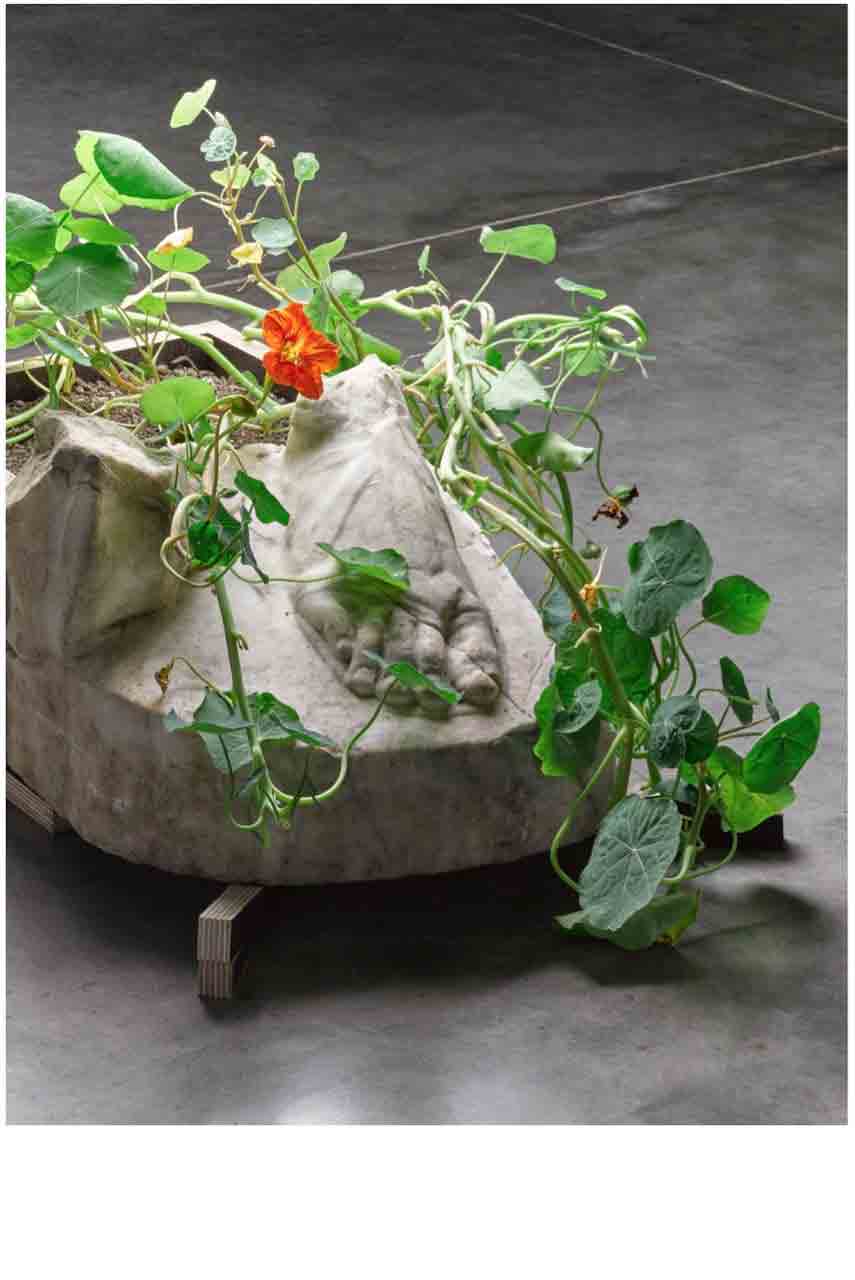 Spread out across all of the Bermondsey galleries, the exhibition brings together themes Vo has been developing over the past decade. This includes how identity, layered and fluid, constantly moves between private intimacies (dreams, desires, sorrows) and the larger power structures continually shaping our lives. The interconnectedness and cyclical nature of life is evident throughout the exhibition. Hybrid plants take root and grow amongst ancient fragments of former grandeur; the wood of one of Vo’s pieces is used as fuel to light the rest.

Accompanying the works is a timeline, available via a QR code at the beginning of the exhibition. Every few days the timeline will be updated to include a description of each empire’s end, in chronological order, to be complete by the time the exhibition finishes in early November. Remnants of empire are everywhere in Vo’s after-Eden landscape, in various forms. Achievements themselves may be finite, empires no more, but there is an inherent recycling at work: objects, as with people, dispersed through time and place, become something else again.

Vo fits the description of a conceptual artist, and indeed has been influenced by artists like Felix Gonzales-Torres (1957 – 1996), who also questioned master narratives and their influence on the personal and private. Yet for Vo it is the primacy of lived experience that defines his work, placing it more in the performative category.

Vo’s family has participated in creating various works over the years. His father, Phung Vo, is a constant in the artist’s practice, transcribing one particular letter over and over again in his beautiful script. In almost every exhibition Vo has staged since 2009, a simply-framed handwritten transcription by his father has appeared – the last letter home from a French missionary in Vietnam, from the mid-19th century. One of the themes for Vo throughout his career has been the Catholic church (both its seduction and violence) and the destabilising influence Catholic missions had on Vietnamese society in the years leading up to colonial rule.

Danh Vo was born in Vietnam in 1975, months after the fall of Saigon. His family was one of many South Vietnamese who fled in the years immediately following, often in homemade boats, always in perilous conditions. After being rescued at sea, Vo’s family settled in Denmark. In 2015 he represented Denmark at the Venice Biennal. He has won the Hugo Boss Prize (2012) and the ARKEN Art Prize in Denmark (2015), among many others, and has exhibited extensively in museums and galleries around the world. He currently lives and works between Berlin (and his farm in the east of Germany) and Mexico City.

Against this backdrop, Vo questions how national culture can exist. When our stories weave in and out of the stories and histories of others – local, national and global. When the world is in constant flux, humanity itself inherently migratory and constantly consuming, combining and producing – a conflagration of wills and wants, from the moment we are born to the moment we die. As memories are formed and reformed, forgotten, grafted, co-opted. As narratives continue to be writ and new meanings assigned – how can an idea like national culture persist?

Vo answers these questions with the kind of incongruous compositions he is known for. Objects are used for their interpretive potential, based on their own history through previous ownership or proximity to historical events. With these, Vo demonstrates the interplay of materials and meaning. Nothing retains its original meaning or function. Vo’s objects are not Duchampian ready-mades; they are not critiques on post-modern consumerism or culture. They are relics, each with their own story to tell. Unsparing witnesses. 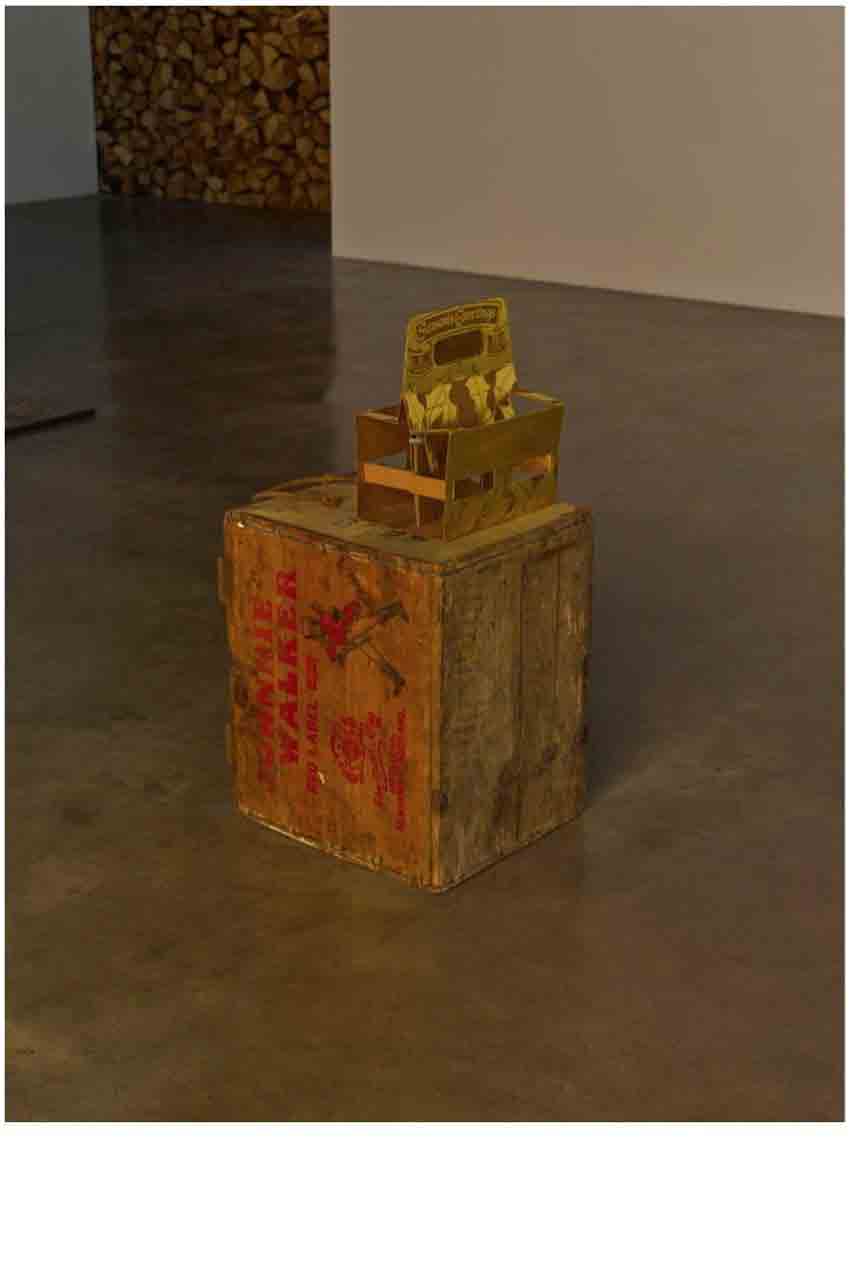 In this way, each relic carries with it (in it) a host of social pressures and historical burdens. Vo’s interest is in decontextualizing objects, the more familiar the better, and then recontextualizing them. The fragmentation in Vo’s work (a work "littered with broken bodies, figuratively and metaphorically") allows for the compression of time and subject, and for the objects to be outed as the social and historical repositories they are.

There are the discarded boxes he collects, particularly those of multi-national brands, drawing parallels between their proliferation and the export of Christianity. These boxes are then sent to Bangkok to be gilded by artisans in the manner of religious relics, rearticulating in gold every printed mark, whether logo, tagline or unit measure. The boxes are then sent back to Vo and become something else again – gilded physically and metaphorically, they are transformed.

The first gallery of the exhibition contains, among other things, an entire apple tree, minus the roots. Out in the corridor, not far away, is a wood burner, one of several installed throughout, creating light for the exhibition. The soft shadows give an intimacy unexpected in the high-ceilinged, normally-vast-feeling gallery spaces. Vo’s farmhouse in Germany is heated solely by fire furnaces. Here they are fuelled by wood from one of the works on display: a massive rendering of the first official U.S. flag, measuring more than ten metres across and over five metres high. The work is comprised of thirteen steel stars (for the thirteen original colonies) and a steadily diminishing pile of wood logs. By the time the exhibition closes, the night before the U.S. election, the flag, apart from the steel stars, will have been consumed.

Until that time, the flag is installed in the South Gallery, the room where it feels most like a garden, and where time slows. Meandering unhurriedly across the gallery floor are seven marble and sandstone fragments from different eras combined with custom modular boxes containing growing, climbing Nasturtium plants.

The Nasturtium flower has long been a favourite of Vo’s. Possessing more than mere beauty, this plant has history. A native of the Americas, it was named in 1753 by a Swedish botanist who likened its leaves to shields and its flowers to bloodied helmets. Although named for an ancient Greek triumphalist monument, Trapaeolum Majus, the name also refers to the most feared and effective soldiers of the day, the Ottomans, thus imbuing the flowers with meaning arrived at through a colonial perspective. The flower itself, however, has been taken up by many over the years, for various purposes.