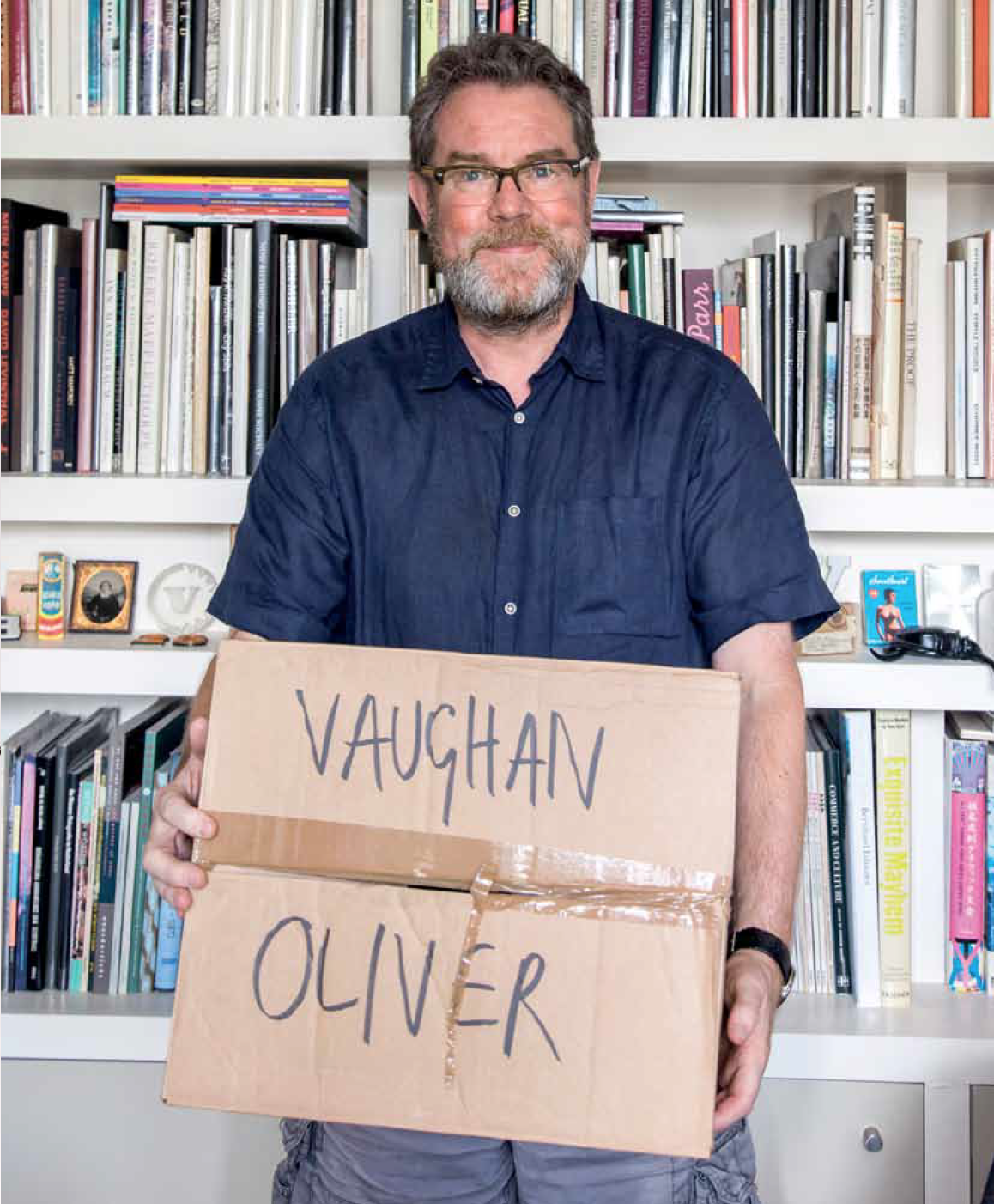 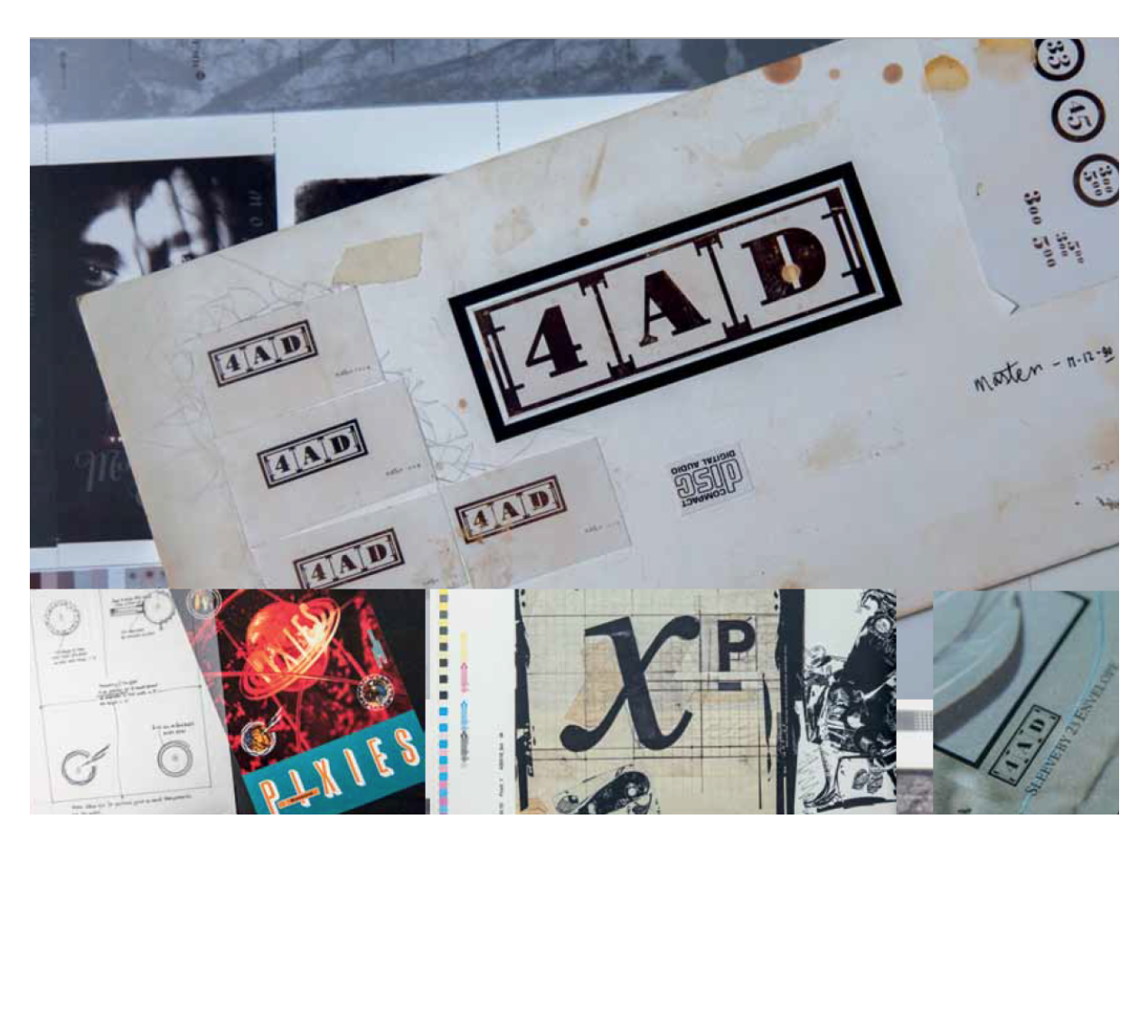 You might not know the name, but you’d definitely recognise Vaughan Oliver’s work. As in-house graphic designer (and first employee) at infamous indie label 4AD, he worked alongside music industry legend Ivo Watts-Russell — demonstrating both Ivo and 4AD’s idiosyncratic and artist-led approach.
His back catalogue includes sleeves for bands big (The Pixies, Cocteau Twins) and small (pretty much everyone else), as well as books, posters, exhibitions and branding, and his distinctive style has seen him recognised as one of the most influential graphic designers of the last century.

I meet Vaughan at home in Epsom, on a grey Tuesday in June. He seems surprised (I’ve turned up in the middle of one of the Euro 2016 matches; football is his other passion), but welcomes me into his home. He shows me around his studio — more of a library, really, with stuffed bookshelves lining the walls, looking over a young student with an enormous iMac — and we sit down at his kitchen table with a good bottle of Viognier. Surrounded by books and objects from his decades in design, Vaughan is in his element, constantly retrieving items from his archives (and additional wine) as we talk. His relaxed charm, years of experience of dealing with artistic minds, and willingness to be both irreverent and political means that we get along, straight from the off.

Vaughan Oliver: I used to have a lovely big studio, just me and a couple of others. Most of it’s in storage now, but we’ve got more into education. It was very organic, lots of things hanging around.
Seb law: As I’d expect. I’d be surprised if you had a minimal, bright white space now!

VO: Rick Poynor called the studio ‘scholarly’. He authored our book, Visceral Pleasures. He’s a highly respected design critic. I took it in a good way, because I would like to be scholarly at some point. Instead of this random, abstract fellow. But not having a scholarly space. It’s books, really. Books there, a bit of inspiration on the wall. Do you know what that is? (He gestures to a vaguely phallic object.)

SL: Some sort of fertility thing. Tortoise? Slug?
VO: You’re just like me mam. It’s a severed penis. And I think those are breasts down there too.

SL: And your CDs, too?
VO: I should put a door on that! Most of the vinyl has gone up to the archive.

SL: How many records do you have?
VO: I have no idea. I’m not actively buying records actually, these days. I should show you this.

SL: What is it?
VO: It’s an illustration by Ian Pollock. He does good work, and was very inspirational for me at college. So I contacted him to go over the Indy Cindy thing, and he said no. He’d given up on illustration, moved out of London, and both his parents had died. And he was really down.

Life has been full of moments of great coincidence for me. One of them was meeting Ivo. I’d only just come to London, and was working in a packaging design studio.

SL: What were you designing?
VO: Airfix model kits, stuff for Habitat, packaging. It was an interesting place for me to be, because I’d never really studied typography or packaging. At college — polytechnic, it was back then — I’d really focused on the illustration side of things. The letterforms and the fonts I really didn’t get. Too many names, too many sizes, and it’s governed by a different language: points, and picas, and different measurements. It tends to kind of put me at arm’s length. Why do you need all this language?

SL: Sometimes you hide things behind complicated words as jargon, to ensure people don’t understand.
VO: It becomes an elitist thing, it’s not inclusive. I’m off at a tangent already! That’s one of the aspects of academia — which I’ve moved more into now — which I don’t appreciate.
But anyway. There were a couple of gentlemen that had done some of the first work for Ivo. They were going away, and they said, ‘Meet this fellow.’ They could see I was music mad. I went and met him, and it went very well. We would meet at gigs — so it wasn’t a party, it was a band. There was a similar ear at work, if you like.

SL: Which band?
VO: Now you’re testing! I can’t mention 4AD bands, because that’d be obvious. I remember seeing a fantastic Rip Rig + Panic gig. Pere Ubu — they’re extreme, they’re marvellous. I once saw them support The Pixies. Twice, actually. The first night, The Pixies ran though their set, immaculate; the next night, they did their encore, came off, came back on, and then worked through their set backwards. That’s genius, I would say. You work for some cadence, and cascades, and the rhythm. And to do something like that...

SL: It works for the fans as well, the people that’ve booked to see two nights in a row, to show them something different — and to kind of reward your superfans.
VO: I’d never thought of it like that. I just saw Ivo at gigs, y’know. He was just operating by himself, and he needed an identity. We didn’t use the word ‘brand’ back then. I was like, “Oh, give us a job, mate!”

SL: How old were you?
VO: I guess I was a couple of years out of college. 22, 23. So he set me off just doing freelance stuff, and we just got on very well. I became his first ever employee. That shows how daft he was!
And it shows how much he cared for the whole thing, for the package. When I hear him talk about his early inspirations, the sleeve always comes into it. I think he expected me to do other things; I think I appeared a little more confident than I was, and he expected me to go out and have more contact in terms of the promotional aspect. It does seem crazy for there to be two people in the office, and one of them to be at the drawing board!

SL: It’s the way, when you start in a small company, you go and focus on your key thing.
VO: That was my key thing, as I understood it. There was no manifesto as to how to run an independent record company. It was just an understanding — an implicit understanding, a really empathetic understanding. Sleeves were my work. But it had ripples, at the end of the day; it went out into a broader culture.
And what was fantastic was its smallness. It grew slowly. But in terms of the creative aspect, the bands’ managers generally took a back seat. They didn’t try and force anything on you. No artistic intervention. I’m talking to Charles from The Pixies, I’m talking to Emma from Lush, I’m talking directly to the creators. If I invited a collaborator, like a photographer, they didn’t have an agent. We’re all talking directly to each other. I think that’s really important, in terms of the creativity that comes out of it.
Now, that’s not unusual, but there’s usually a marketing person or a management person who will lead the encounter — “Get this logo just a BIT bigger.” (laughs) But I was cocooned at the time. And I still am, to a degree. Although with clients now, I have too much history, too much baggage almost; “We want this, that you did then; that’s when you were at your best, for us.” But I don’t want to do that. I want to do something new! 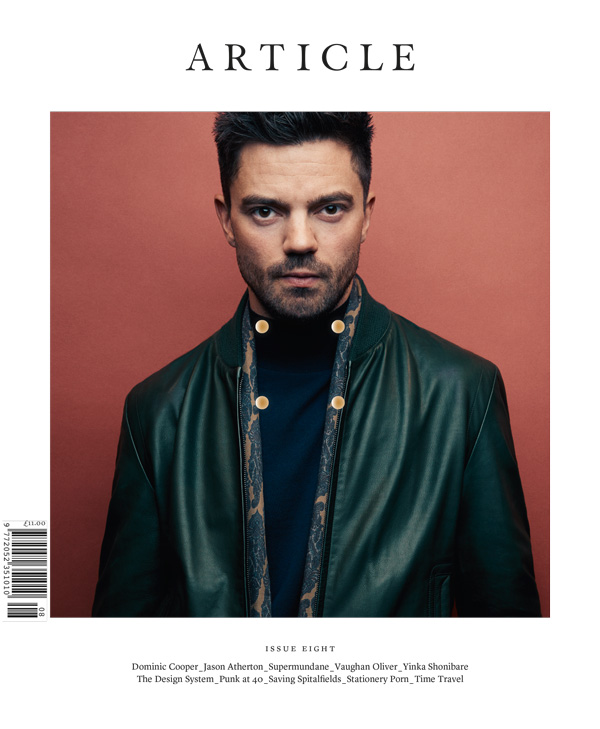