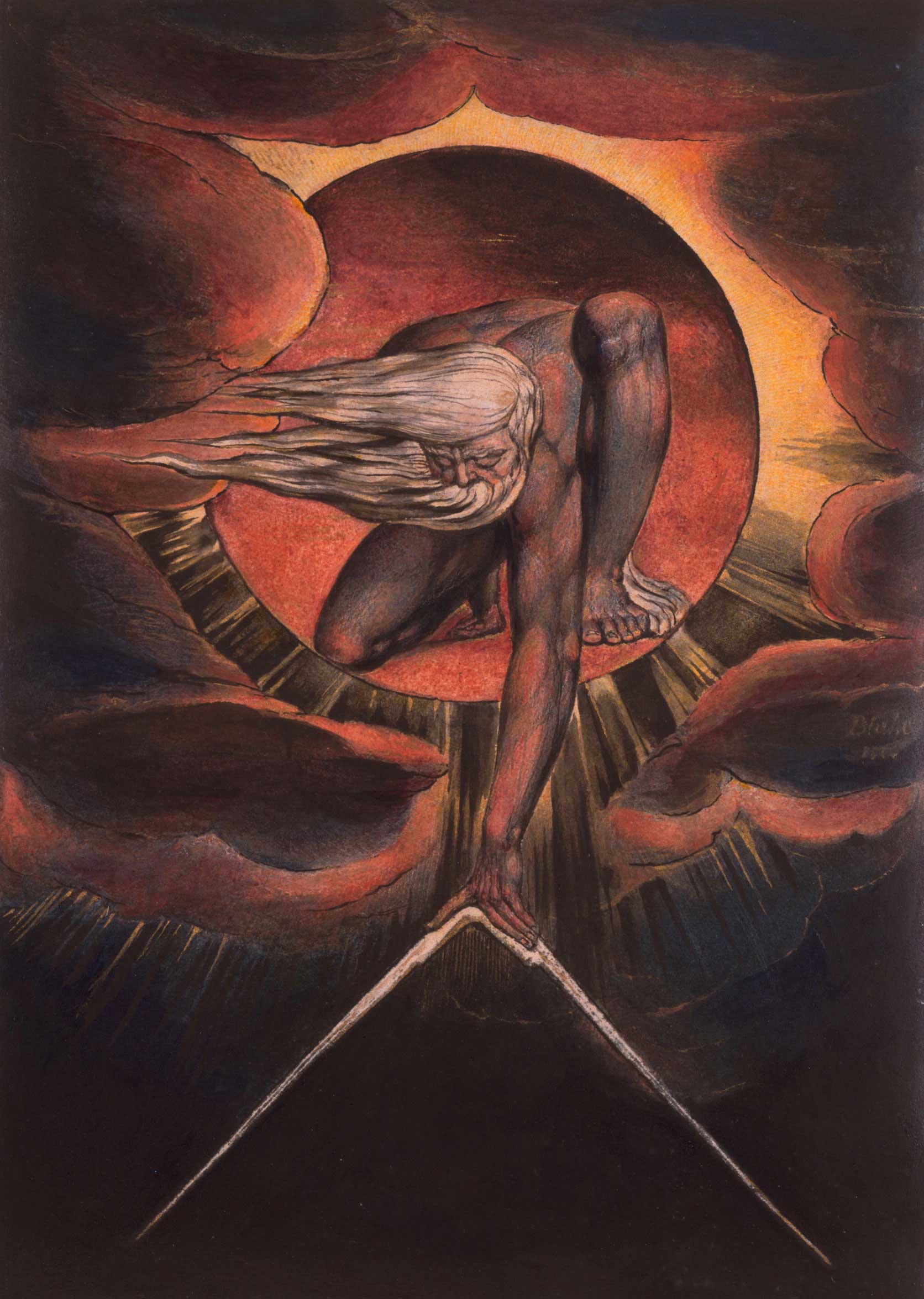 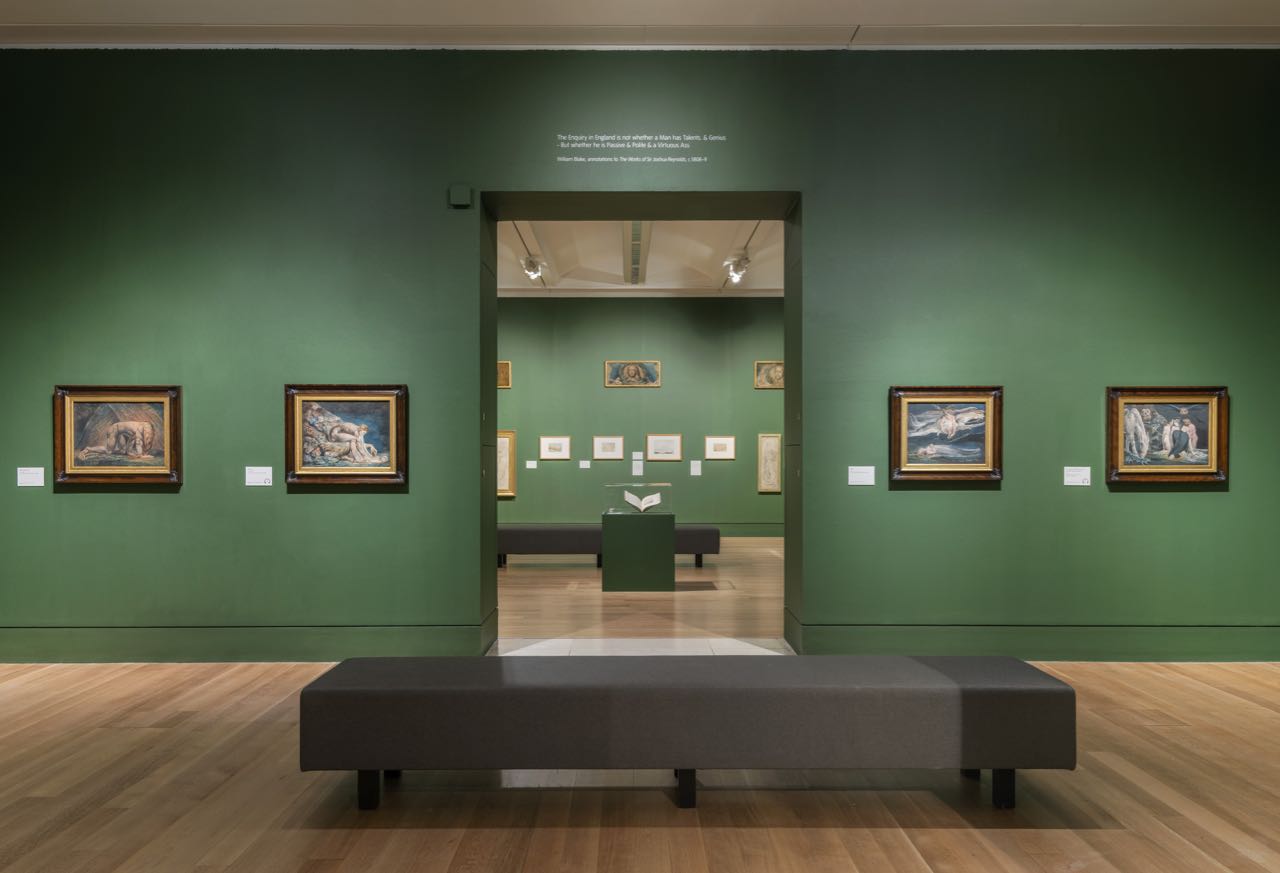 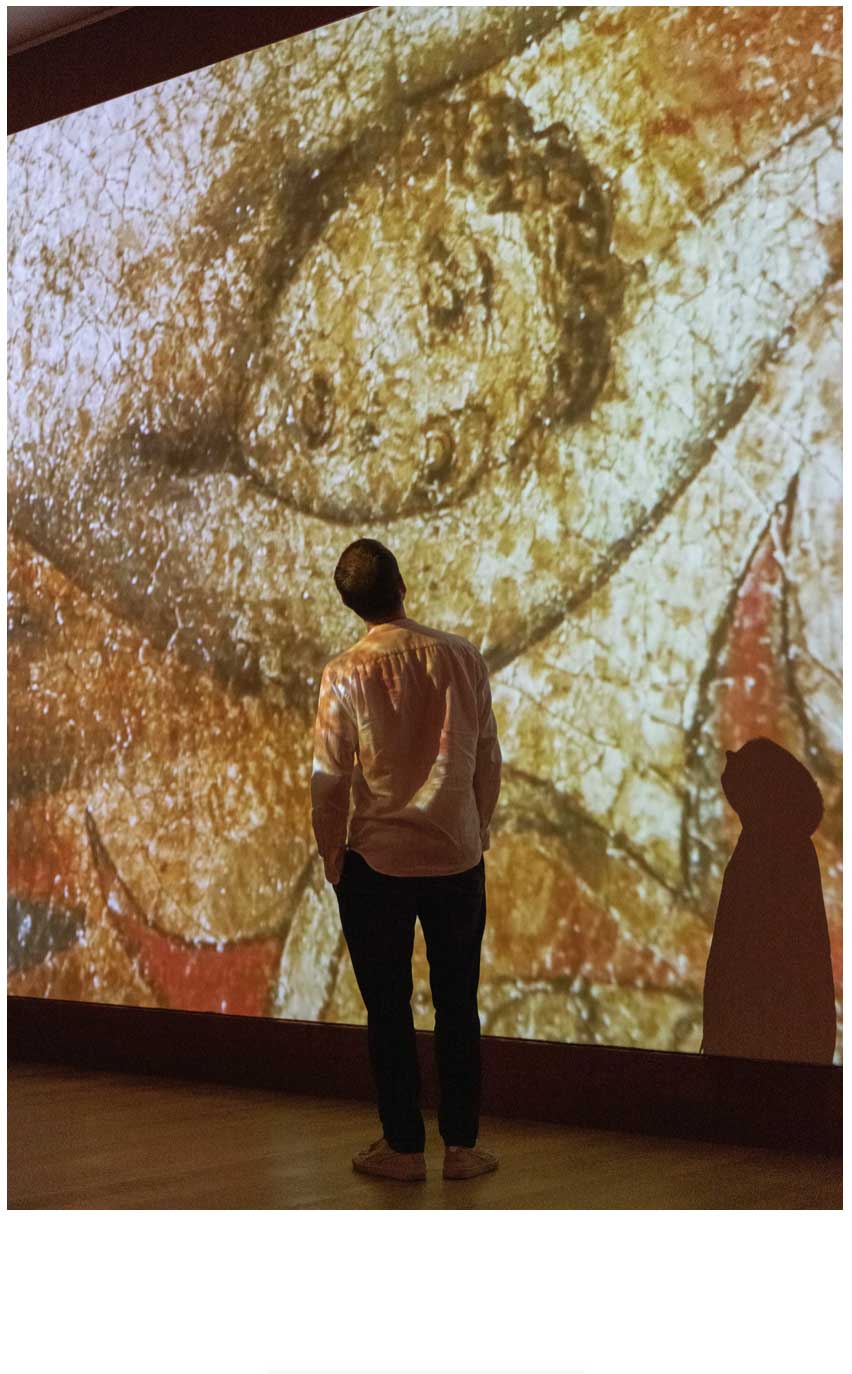 TDH: Are there dealers at this time?
JF: It’s still a long way from what we know today as art dealers; it was more things like the Summer Exhibition at the Royal Academy, that would have been the ‘shop window’ and so we see at the start of the exhibition, when he’s young, he is trying to get his works shown there.

*TDH: And then there’s the solo exhibition he puts on.
JF: As with his books and his ideas of printing them himself, he doesn’t want to rely on other people, he doesn’t want to be compromised. He wants to take control of the mode of production for himself. And this is very important to him and that’s why he holds the exhibition, which of course fails but it’s a heroic failure. It’s also one of the earliest precedents for other great one-man shows of the 19th century. It’s sort of a trope in this period for artists who turn their back on what the most high-profile exhibiting society of the day is and to say *‘my work is not being shown to best advantage there and I need to create something for myself in order to show the work the way it should be shown’.
So it began a pattern which continues to this present day, of artists seeking to, or understanding that being an artist is not just about making the works, but also having a say in the way the works are seen. And this is something artists have become more and more involved with. You see it now with artists running their own spaces, or showing in alternative spaces, not wanting to show their works in a commercial gallery. And all this can be traced back to Blake.

The notion of Blake as an artist ahead of his time is an enduring one; as the exhibition demonstrates, the reality is more complex. Moving through the rooms and his life’s works, it is evident that what established him as one of the quintessential Romantic artists, is also what makes him so relevant in the high-tech, A.I. world of the 21century: his understanding that imagination is paramount and necessary. 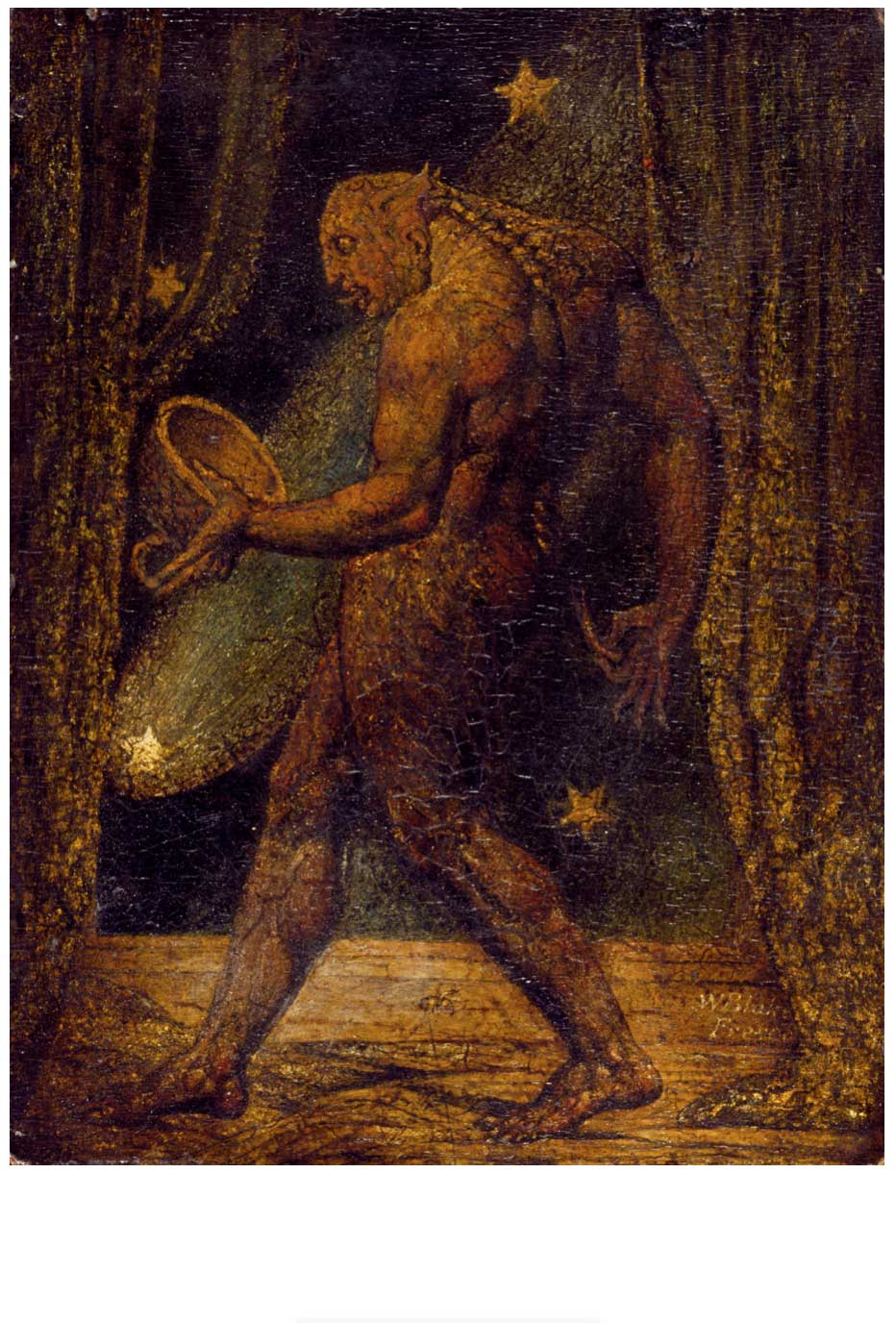 TDH: Blake didn’t have a conventional career in that he didn’t really have patrons or exhibit in the way most artists did at the time. He’s seen generally more like an outsider, despite his formal training.
JF: It’s more a combination of the two. He has the conventional training, as an engraver, at the Royal Academy schools, and he does find his patrons, but he’s never really accepted into the mainstream. So he is fortunate to find patrons who do appreciate him. But one of the interesting things with the illuminated books is that part of the reason I think they were appreciated by the few people who purchased them is that those were patrons who were attracted to the unusual, and so who valued what they saw as a certain eccentricity or outsider status. I mean you get that a lot, right up to the present day, where being perceived as an outsider is something that can be monetised and can be marketable in itself, and is always attractive to a certain kind of patron, who wants to avoid the obvious artists to patronise. It’s a complicated thing, I think he kind of straddles both, like a tightrope walk.

TDH: It’s probably a difficult time to exist with these ideas, and to make a living as an artist.
JF: It’s a time mired in the Napoleonic wars and the French Revolution.

TDH: All these ideas floating around. And he really does seem to be able to straddle more than one position, as an artist, a writer.
JF: And that’s what he really saw as his great innovation. With the Illuminated books, he talks about how even great writers of the past like Shakespeare and Milton, were still in thrall to the publishers, because they relied on this structure of publishers to bring their work to any kind of audience. Whereas he saw himself as doing something new, bringing together word and image on the page, in these books he produced himself.

Also, artists’ books as we know them today – obviously a big industry and an important part of many artists’ work now – he was one of the pioneers of this.

TDH: What do you think the role of galleries is today? Especially in light of this kind of exhibition.
JF: I think it is to present in a way that is accessible and relevant to as many people as possible. And Blake is a classic example of an artist and writer who often, when he’s been exhibited or written about in the past, has had people sometimes draw particular attention to this very complex and symbolic world he created and have read all sorts of complex meanings into it, which of course is very fascinating, but can make him seem quite forbidding, especially for people who haven’t read anything, or don’t know who all of his characters are. So we’re trying to do it in a slightly different way and draw attention to the way he built his career as an artist and the way he sustained himself and the way he managed to create these very different kinds of art simultaneously in a way that I think will be relevant today. The way he did engraving, miniature portraits as means to be able to work on his illuminated books. 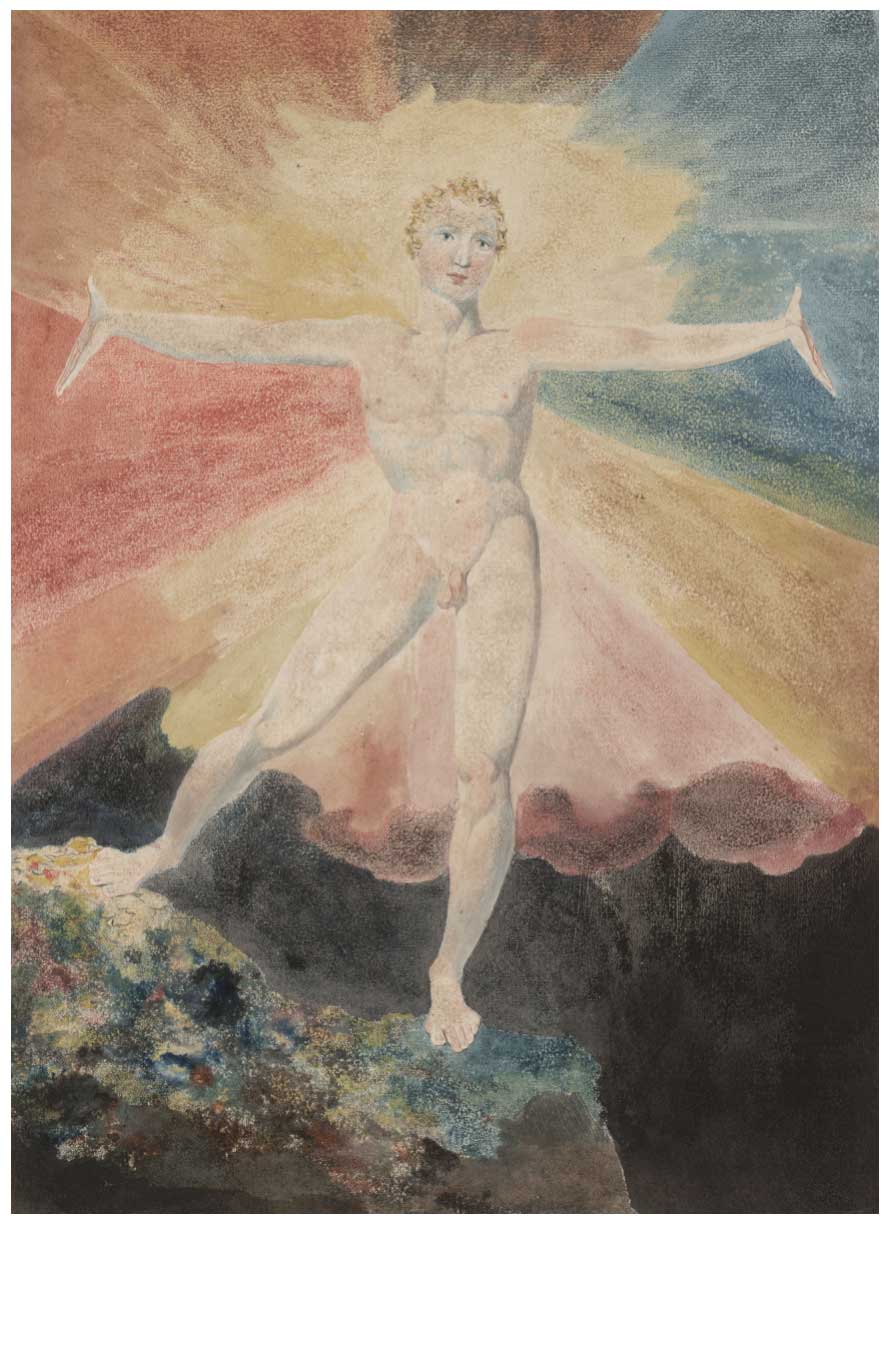 TDH: The more confidence he gains, the more he is able to move away from what he doesn’t want to do.
JF: Yes exactly. So in the first room of the exhibition you can see him really trying to conform to the established art of his day, the biblical subjects, exhibiting at the Royal Academy, and the life drawings he does while studying at the Academy. But he increasingly feels the need to move away from that. Although interestingly, you still see echoes of it in his later art. The work we display as you first enter the exhibition, Albion Rose, is a visionary work and it draws on his own personal mythology. But we also show it in dialogue with the life studies he made at the Royal Academy. You can still see the vestiges of this training as an artist in the very imaginative and original work he goes on to make later in life.

TDH: Towards the end of his life, a lot of young artists began to appreciate him and gather around him. What do you think it was that drew them to him? Was it his integrity as an artist?
JF: I think the integrity is one side of it. There’s a quote somewhere in the exhibition, by Samuel Palmer, one of the ‘Ancients’ as this group called themselves, talking about Blake lying in his bed when he’s a very old man, drawing and looking like Michelangelo, one of those artists; they really saw him in that lineage. Sort of that age-old thing of artists finding elder artists that provide some sort of exemplar. And yes, I think integrity is one aspect of that. I also think the visionary aspect appealed.

TDH: Did they see him as modern then, or maybe modern is not the right word.
JF: Yes I think so; they saw in him something they wanted to capture in their own work. The visionary inspired them, and they would look to the past to find it where ever they could. And Blake was certainly one very tangible link to that. So the notebook with John Varley, where he records the account of the Ghost of the Flea, that was exactly the kind of thing they were after.

TDH: The moves away from traditional processes of creating art would have been something they were interested in.
JF: And traditional modes of realism. So even when some of them, like Samuel Palmer, went on to become primarily landscape artists, they weren’t making landscapes in the sense of Constable; they were trying for something more personal. 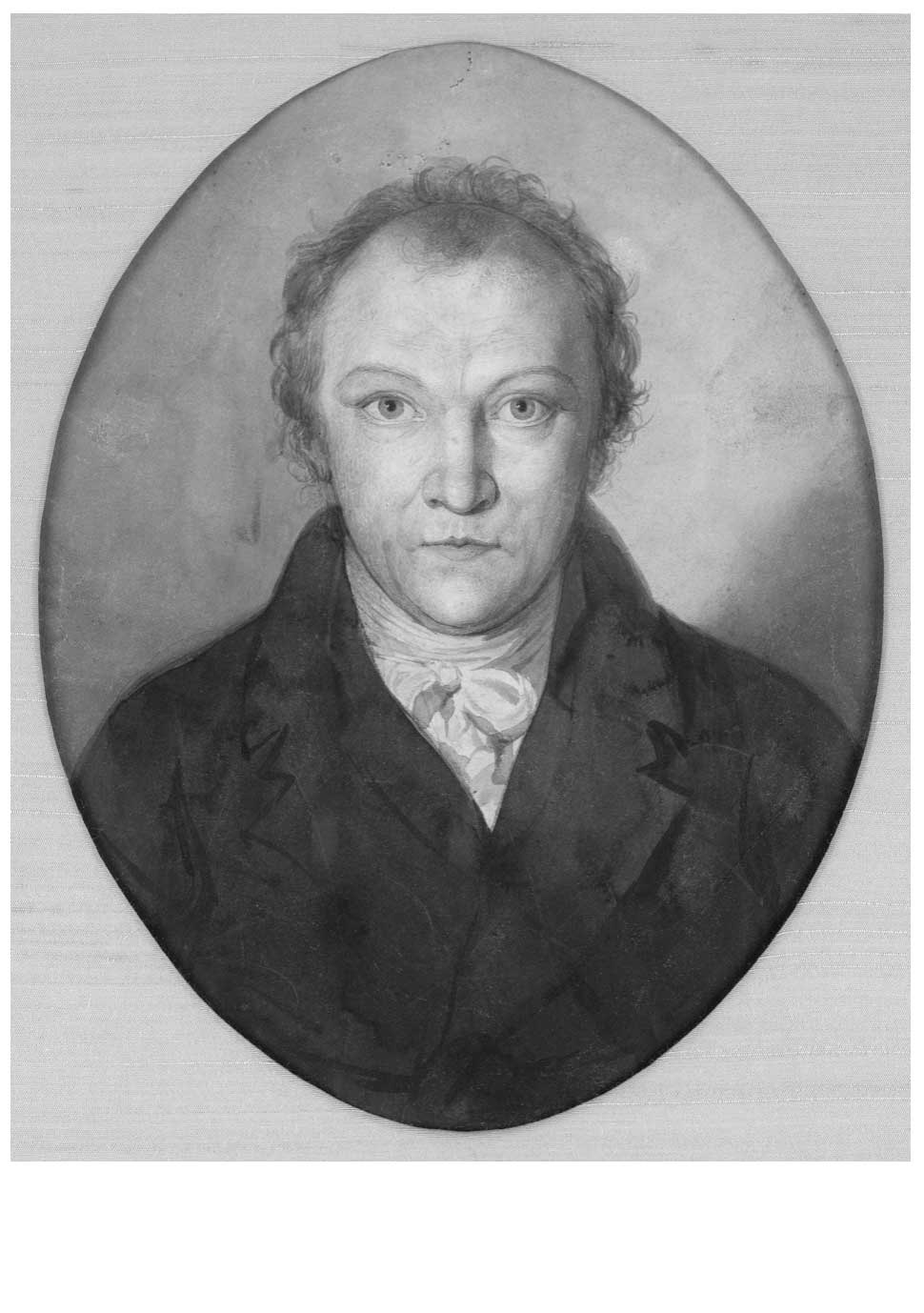 The emphasis is on a 'Blake for all' – apt for an artist who has been appropriated by nearly everyone, regardless of politics or age. But it could equally be ‘Blake and his all’. The art on display is faithful to Blake as he was, in his entirety; the commercial engravings and the fantastical watercolours, the portraits and series of illustrations, the illustrated books he not only self-produced (in order to retain complete production control), but invented a whole new method of doing so. And then never really explained that method, apart from in verse.

Perhaps the best thing Tate Britain has done with this exhibition, and it is one of their primary aims, is simply that of allowing visitors to see, to experience in the flesh, images they may have seen reproduced, many times over, but are here displayed as they were meant to be seen. The experience is quite different.

Just before the exhibition opened, I spoke with James Finch, assistant curator at Tate Britain.

Trisha D’Hoker: Walking around, it’s incredible how modern it feels.
James Finch: Absolutely, and in various ways. It’s there in the visual language that he uses and also in the way he develops his career as an artist, and that’s something we’ve tried to put a lot of emphasis on.

TDH: What makes Blake relevant today and how are you showing that?
JF: In terms of the conflict between his training and the art that was popular in his day, and the art that he really wanted to make – that’s something we wanted to show: the way he was educated, the exhibiting structure of his time, and also the way an artist was successful.

TDH: He seemed to go against traditional expectations from the beginning.
JF: Yes, but I think what’s interesting is how he also has to use his skills as an engraver, which he falls back on throughout his life, as a way of making a living. As he goes through his career that increasingly comes into tension with the visionary art that he wants to make. 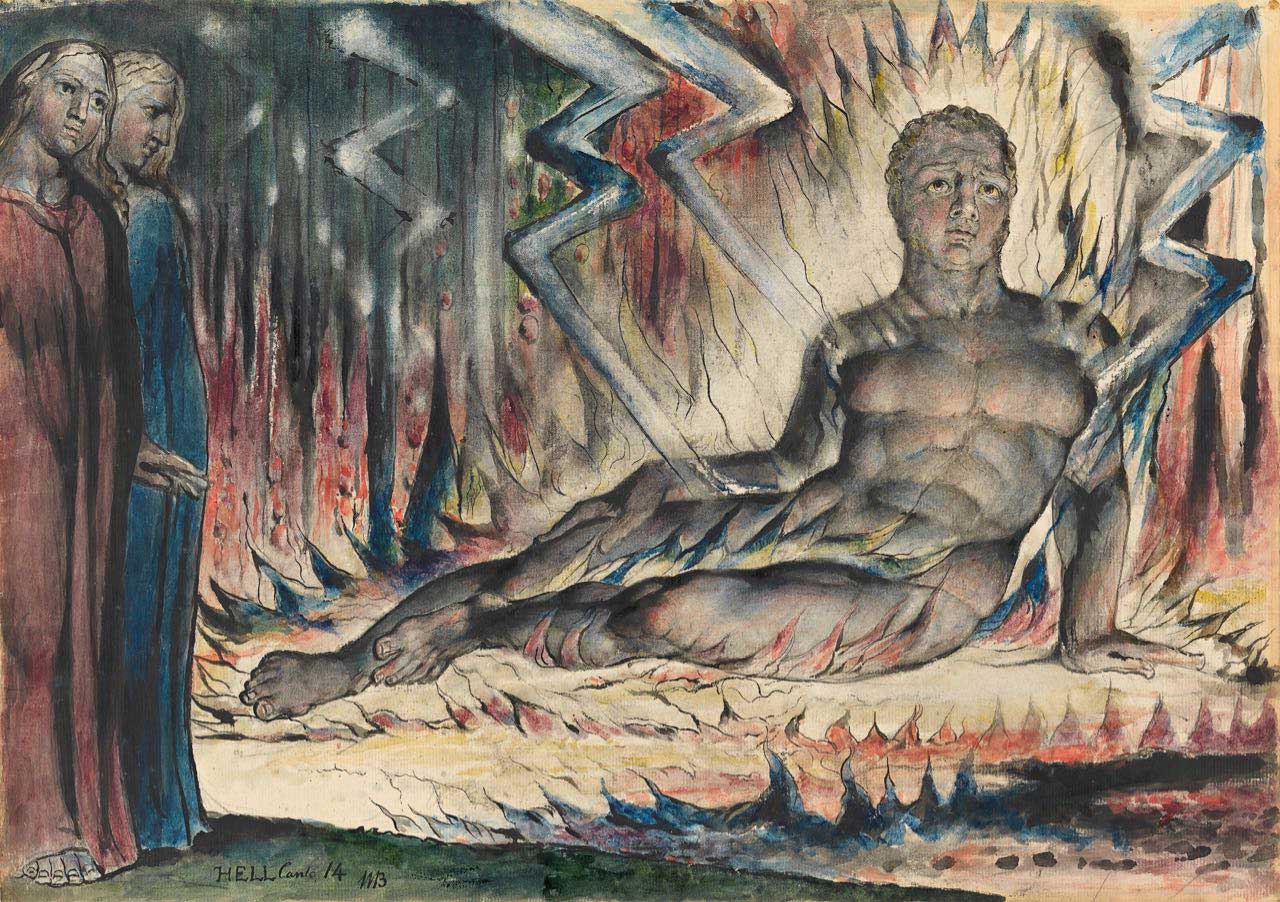