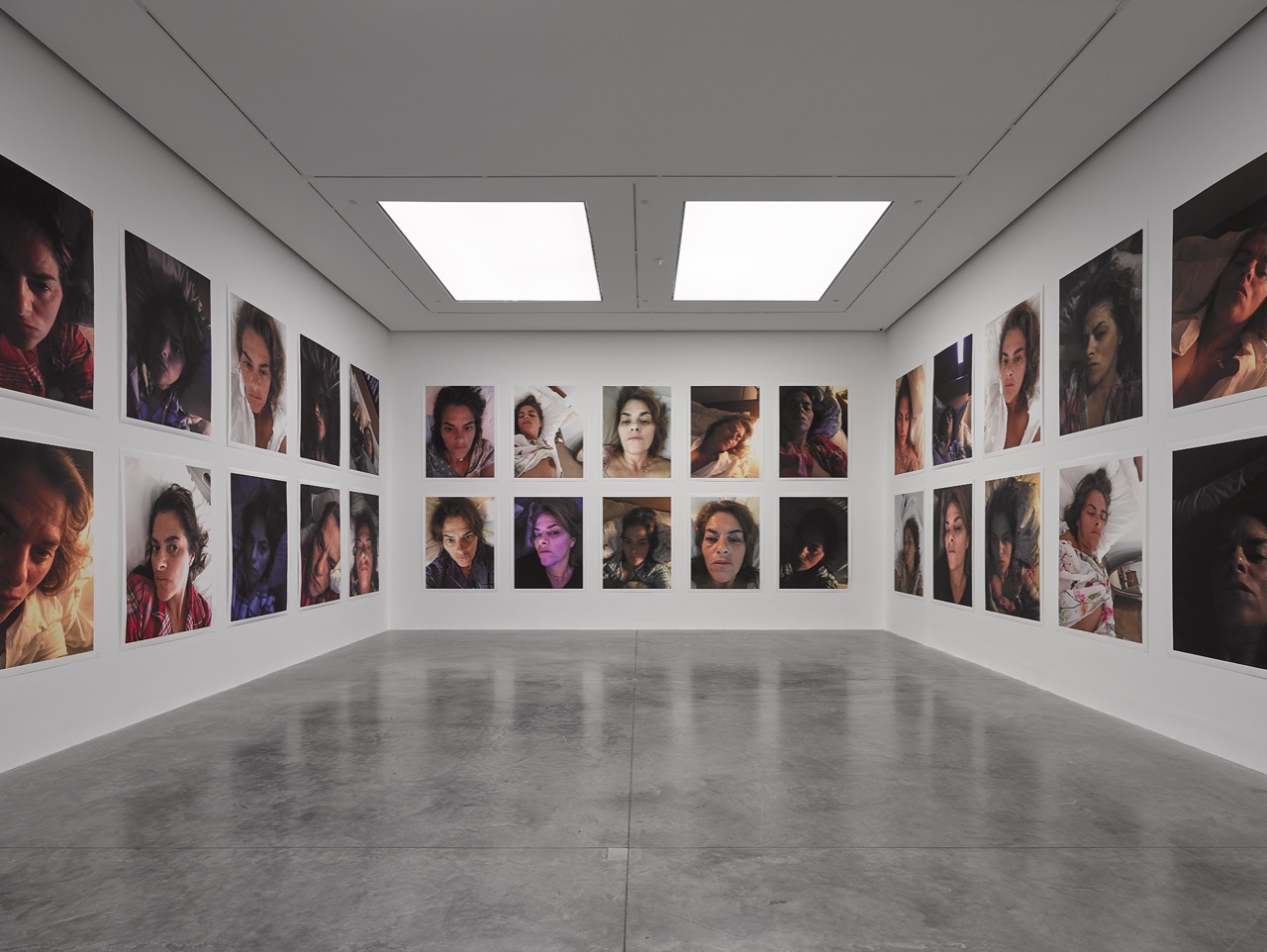 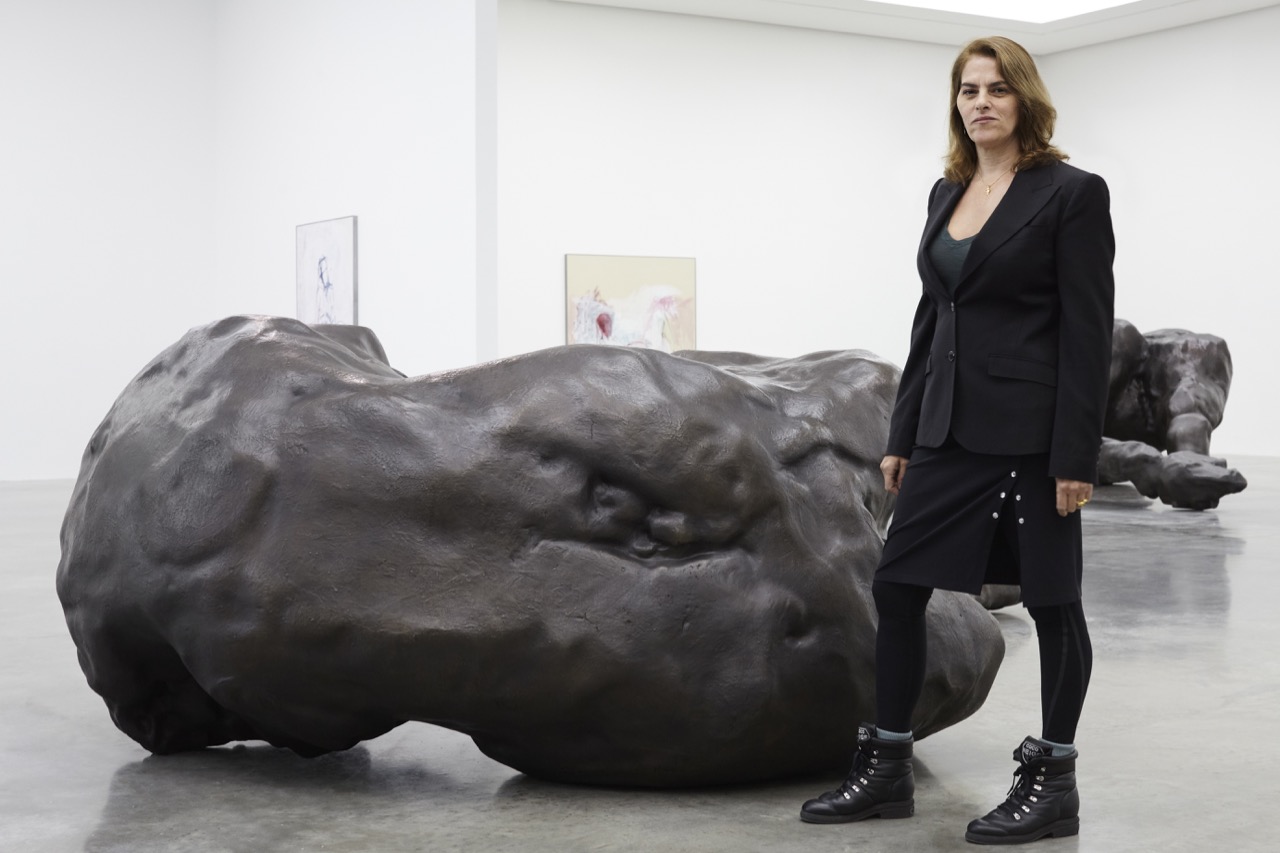 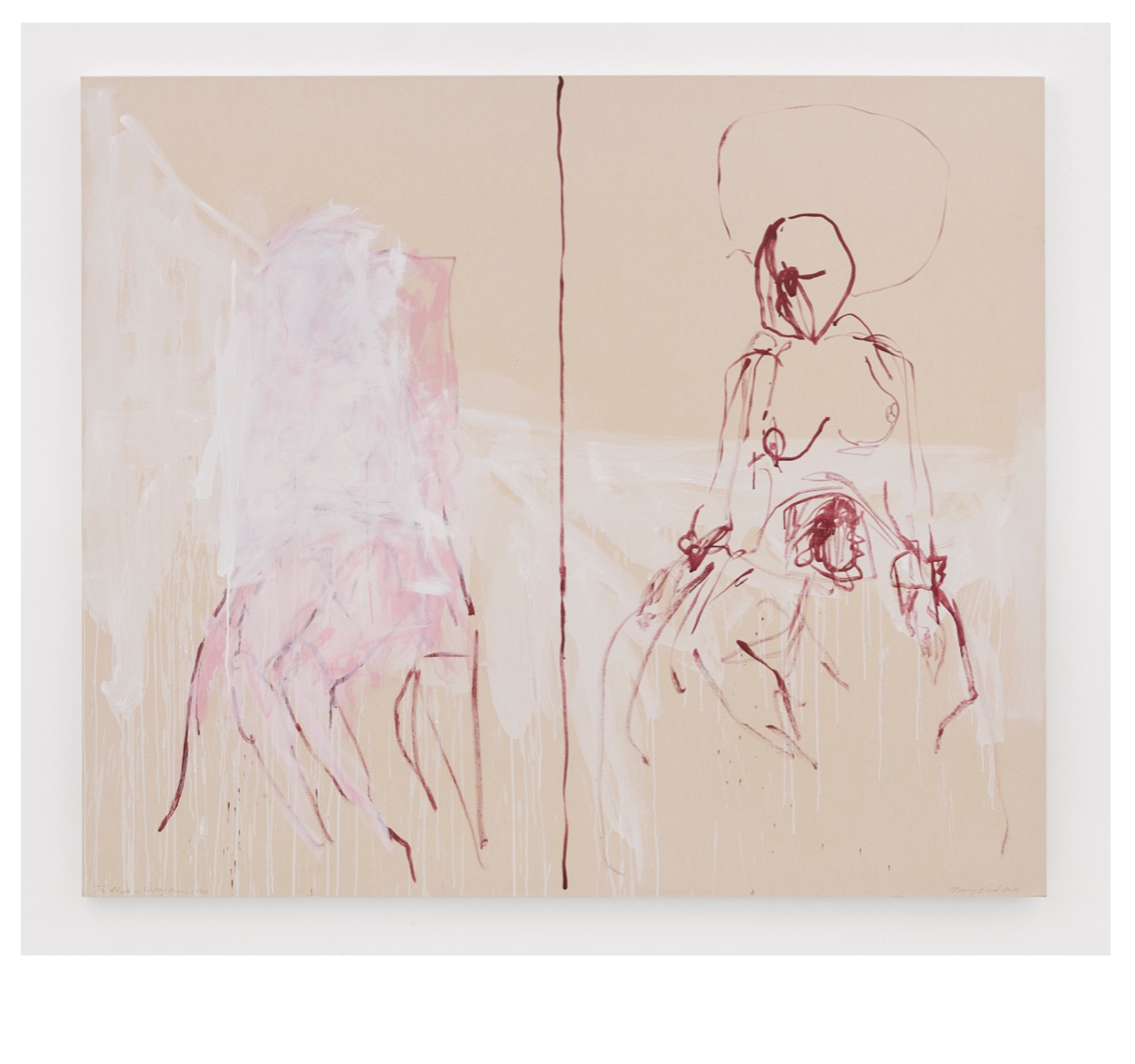 “They go, oh, it’s so obvious she was looking at this, or she’s looking at that. And I would think; no I wasn’t — but yes, of course it’s that and I’ve subconsciously just brought it into my work. The portrait, The Abortion Waiting Room with the split canvas — I just technically wanted to do two different paintings. I was in France and I thought, I’m going to do a painting of my house, and a painting of myself sitting in a chair. But I ended up doing that. Some of them were started in 2006/7, and they ended up getting painted three or four times; other paintings were just one go. With The Abortion Waiting Room, I could have painted over that and done another painting completely but once I started painting out the figure on the chair, that was drawn so badly, I realised the painting was finished. Because I had these two completely different emotions on that one canvas, that weren’t about pretty paint, that weren’t about trying to make a masterful painting. It was about me, and subconsciously something came out that I wasn’t aware was going to come out and when it did come out I felt so much better. One of the paintings I started, I think in 2006, was painted one thing, then I painted over it, painted another thing, painted over it, painted over it, painted over it. And sometimes I do it because I don’t think the painting’s good enough and other times I do it just because I don’t have any canvases. So it’s just, like, the one I least value at the time gets painted over. Or sometimes you see the ghost building. Or sometimes it’s because, like, if I’ve done a painting of myself in bed with a man, and I realise that the man has got to go — so I just paint him out. And it’s that simple, he’s gone. Or maybe he’s a ghost. Or maybe it’s a memory, or maybe it’s someone coming; who knows. Then other times, it might also be I just find that the painting has been too easy for me: I’ve done it too easily, and it’s too much a pastiche of me, and I don’t like it.” 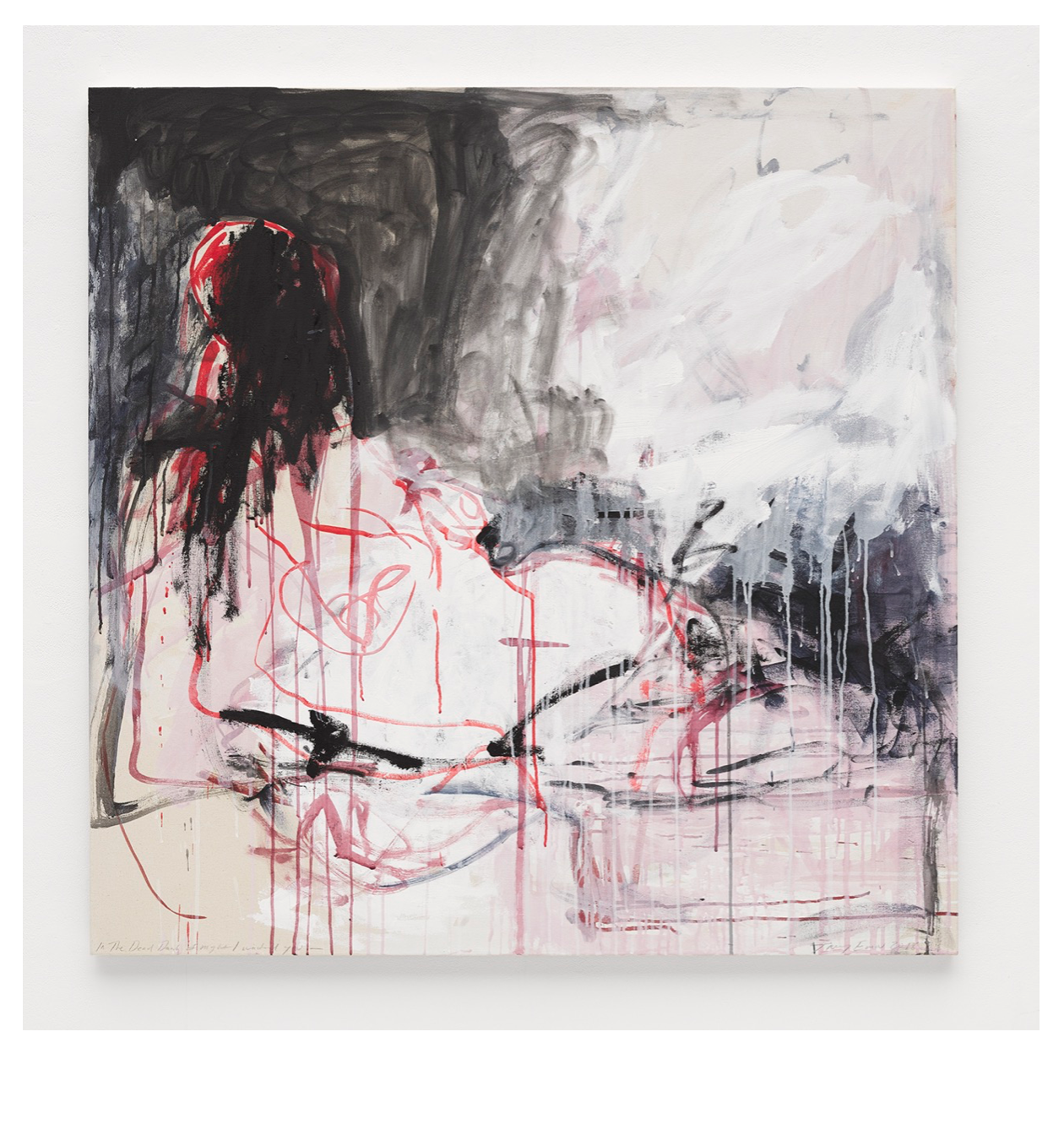 “The thing about Abstract Expressionism — when I was younger, I couldn’t see the subject in it, I didn’t understand the intellect behind it. It was just paint to me, and I couldn’t understand the action of painting. You can only understand the action of painting when you’ve been painting a long time. And people who’ve known me for a long time know I’ve been painting for a really long time. I did my Masters at the Royal College of Art. There was only a short period where I didn’t paint, and that was after my abortion, because I felt too guilty to paint. When I was pregnant, I couldn’t stand the smell of oil paints. And then after the abortion, I felt such a failure, in lots of ways — about my art, my life, everything. I felt too guilty to paint. So I stopped painting and then I did start painting again, but kind of secretly. Because I was still racked with guilt about everything. Which is kind of crazy, when I think about it.

“And this goes back to this show, why it’s so important to me. I was wracked with guilt for years for having the abortion. But I knew I’d done the right thing. I’m very pro-choice, and I knew I’d done the right thing for me; I knew I had no choice. It was what I had to do — and what suffered for that, in lots of ways, was my art, and the way in which I punished myself. But I’m over that now. And I think this show shows that. I’m well out of that, and I’m doing the right thing. 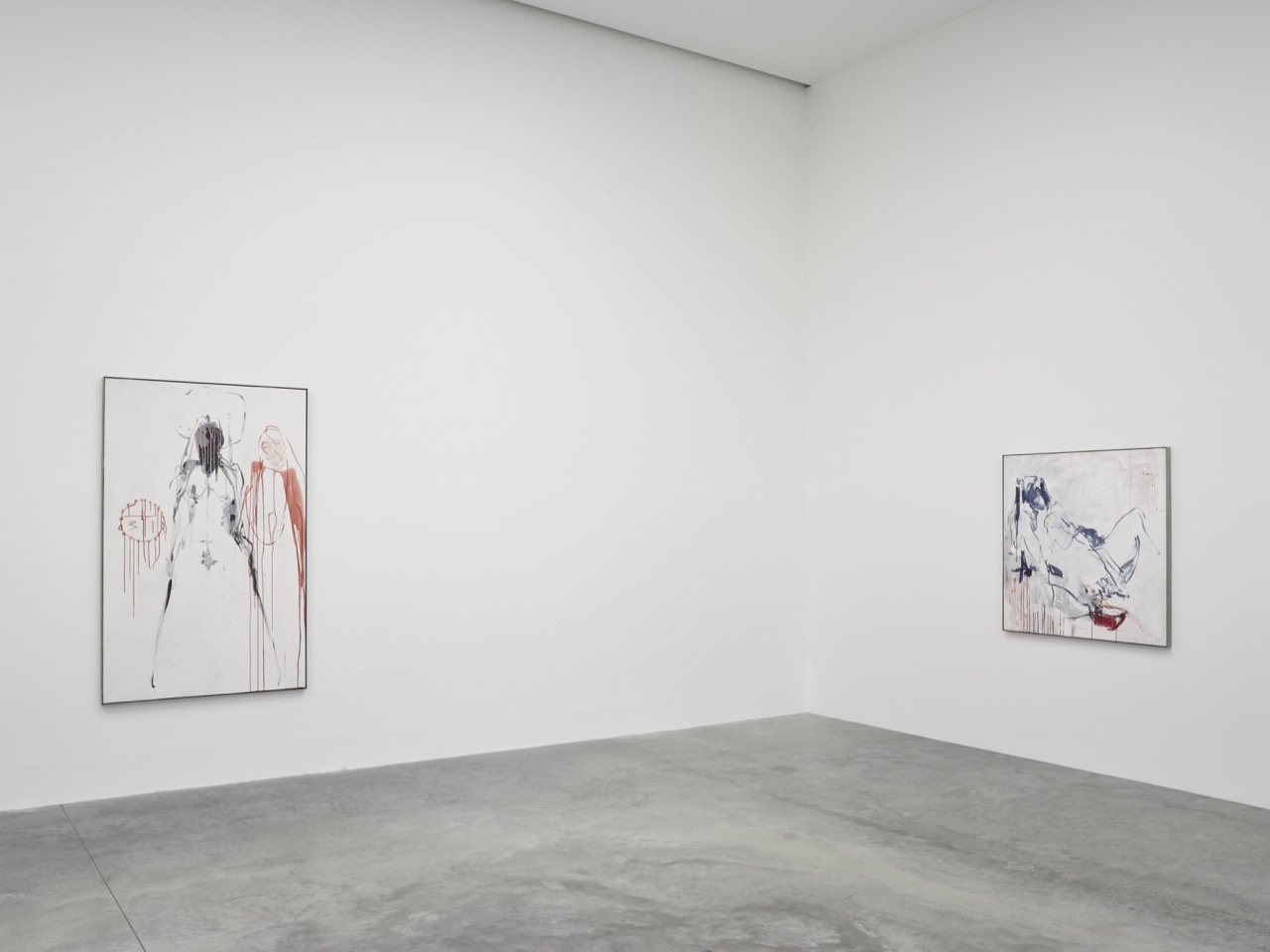 “Suddenly I’m allowed to express myself and have the language and have the voice that I’ve had for years and years and years. And now we’re in a time when we can put these things right, and this is what my work is about. This is how I work, this is why I work, this is why I do what I do, this is why I have to do it. Because if I don’t I’ll be doing something wrong. If there’s anything at the moment, like the zeitgeist – I realise that I’ve been doing the right thing. Imagine for years and years and years people putting you down, telling you you’re shit, or you’re not good enough or telling you that you’re doing the wrong thing. And suddenly you wake up and you go, actually, what I’m doing is right, and what I’ve always been doing is right. So it is really important.

“When I was younger, it was kind of, like, I wanted to look more sophisticated or more clever or more in control — and I think you do, when you’re in your twenties, early thirties, you think you understand things but you really don’t. And now, I’m really back to my teens or early twenties and totally wanting to express myself.

“Now I don’t socialise much, I’m much more a one-to-one person. Nearly every weekend I work in the studio, every evening, it’s my favourite thing to do; expressing myself, being cathartic, getting this stuff out of me and understanding more about myself and how I think and why I’m doing it. I think before, when I was younger, I made art in a different kind of way, more in a kind of ‘cool’ way, even though I’ve never been that cool, but do you know what I mean, more about the ‘art’ and now it really is about me.

“So before when people called me a confessional artist or how it was all about myself, now I think it’s a thousand times more like that, because I don’t have anybody else, and I don’t have anything else in my life. My work has completely taken over now. And I’m totally dedicated to it. That’s the big difference now. The last show I had here, five years ago, was stepping toward this, but this show is what has come to fruition now from the last five years, when I have just worked and worked and worked.

“The mother sculpture is my mum, and it’s my mum in her eighties. And to be able to do that – to feel that and to do it, feels brilliant. Like I said, it feels like I’m doing the right thing. When people would say that my work was all about sex, I’d say, ‘No, it’s not. My work is actually a lot about love, and sometimes it’s about God, and it’s definitely about spiritual things. You just don’t see it.’ Now that I’m older, I’m being more honest. What this whole show is about is about releasing myself from shame. I think when I was younger I suffered a lot of shame in different situations. And this shows I’ve killed this shame; I’ve hung it on the walls. I’ve said shame can’t live anymore. I’ve killed it.” 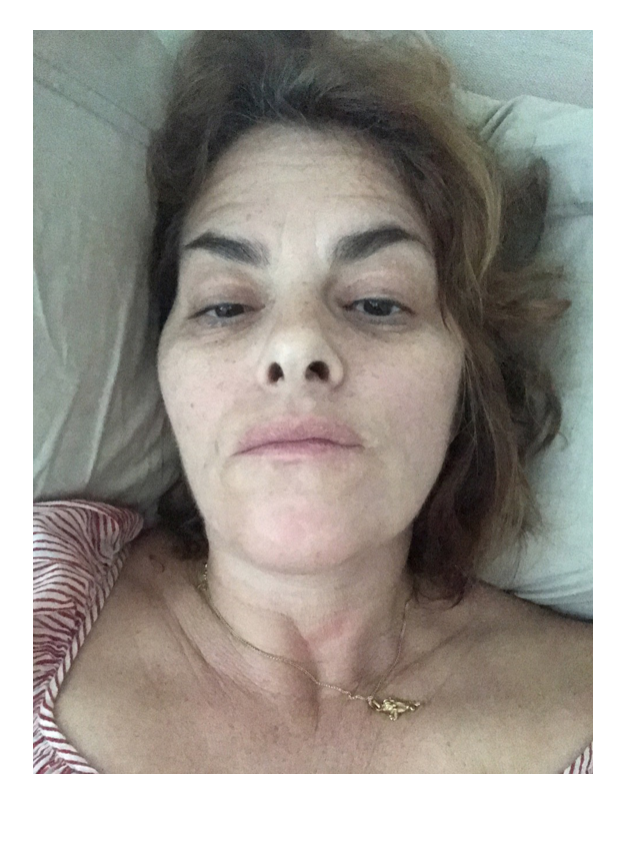 This is an artist in her prime, as true to herself as she’s always been: vulnerable and unflinching, directing her gaze on us as we direct ours on her. But though the themes are the same (how could they not be?) there is a sense of deeper understanding, and a release of any inhibitions the artist may have had about fully realising herself in her work. The results are exhilarating and engrossing.

The exhibition begins with fifty giant prints of Emin in bed, struggling with insomnia. Wander through the galleries, and you begin to appreciate the range of work on display: paintings and sculpture, a short film, a large neon installation and a room full of memorabilia and other intimate works curated from the artist’s archive. Emin also screens a film she made in 1996, How It Feels, in which she explains how she came to the revelation that her art needed to be bound up in her life. That short film is, ideally, all you need before viewing the work. And along with the rest of the show, it’s also a testament to how Emin embraced the issues now being spotlit by the #MeToo and #TimesUp movements, long before they went mainstream. 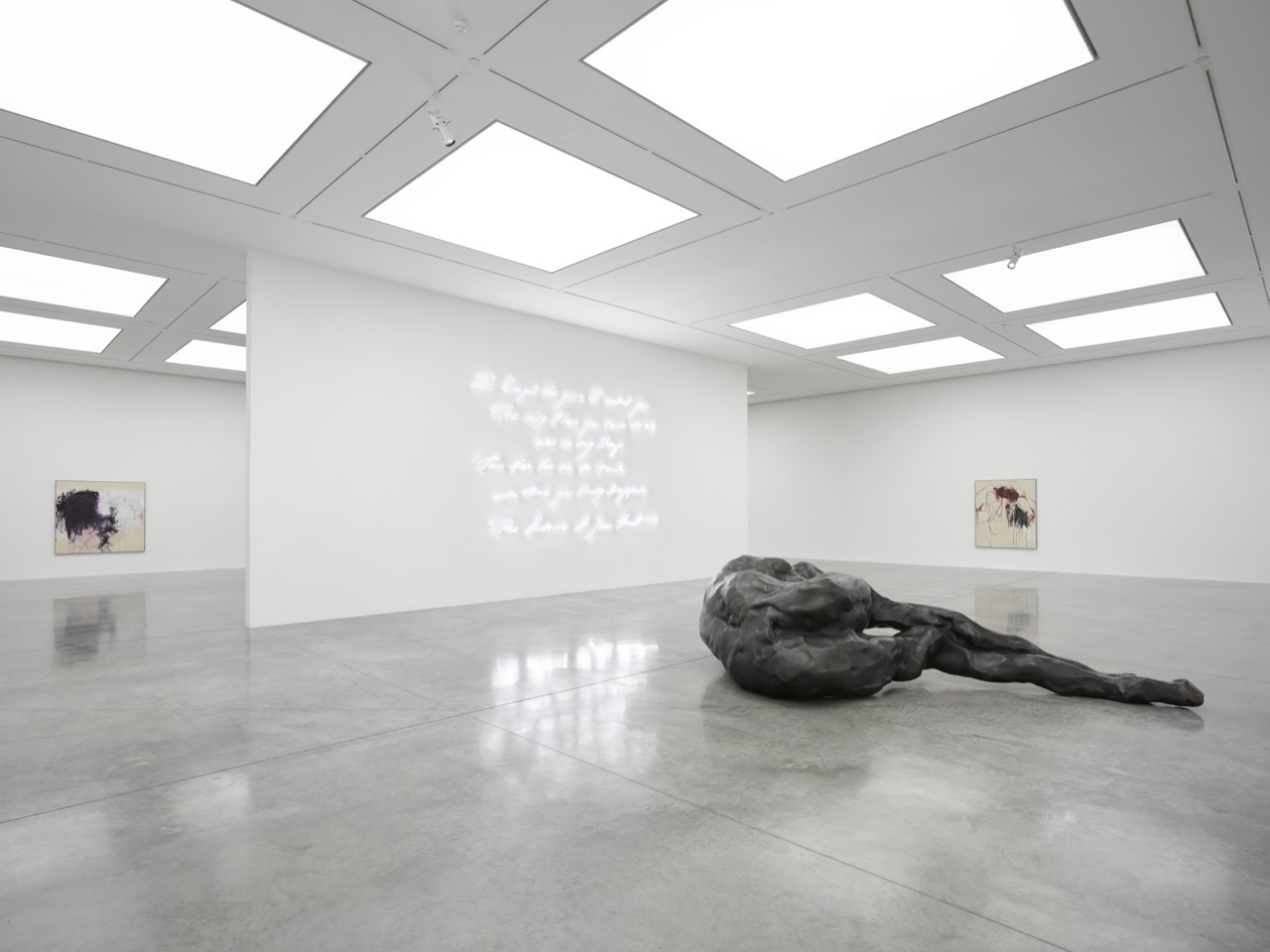 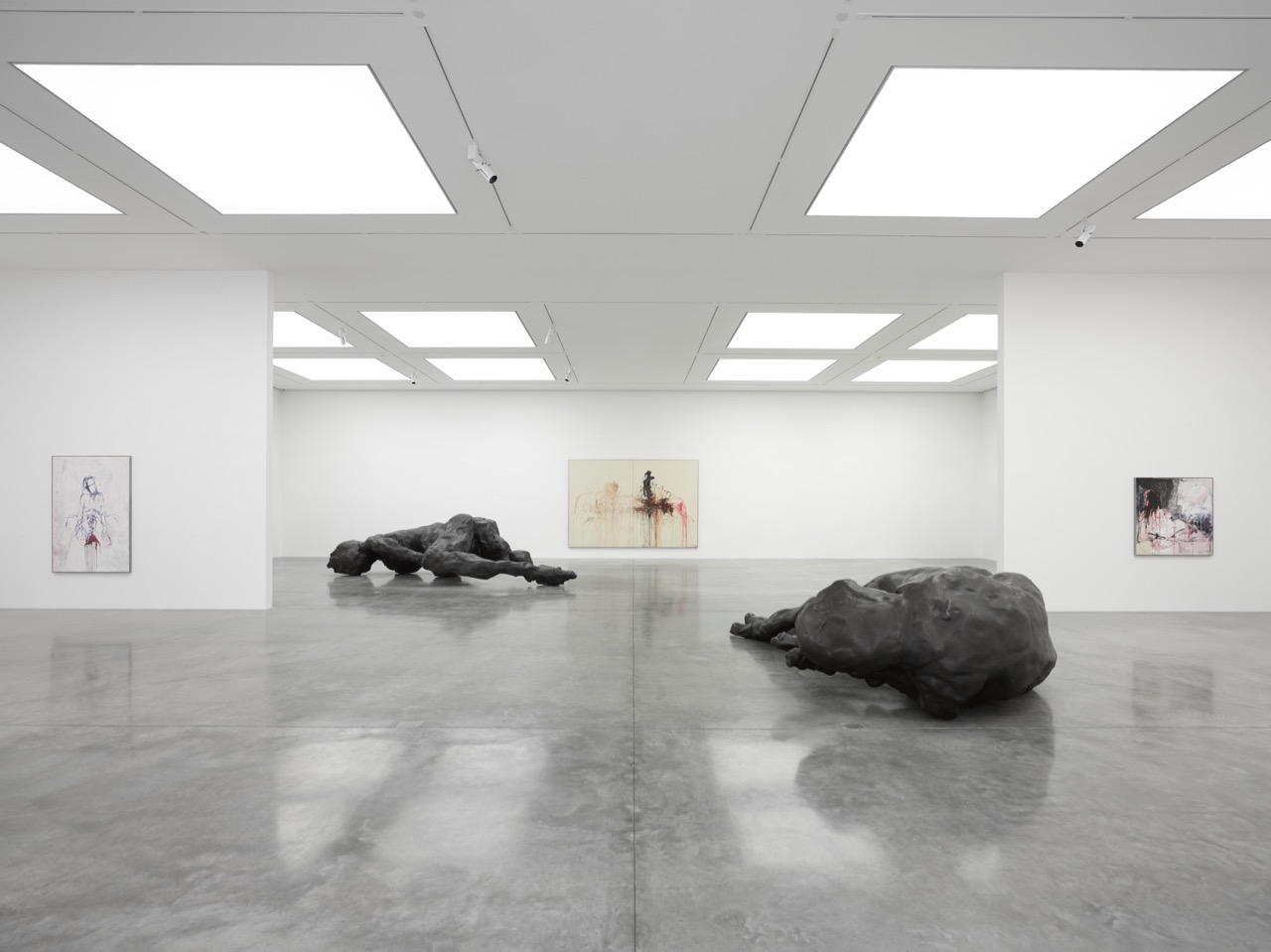