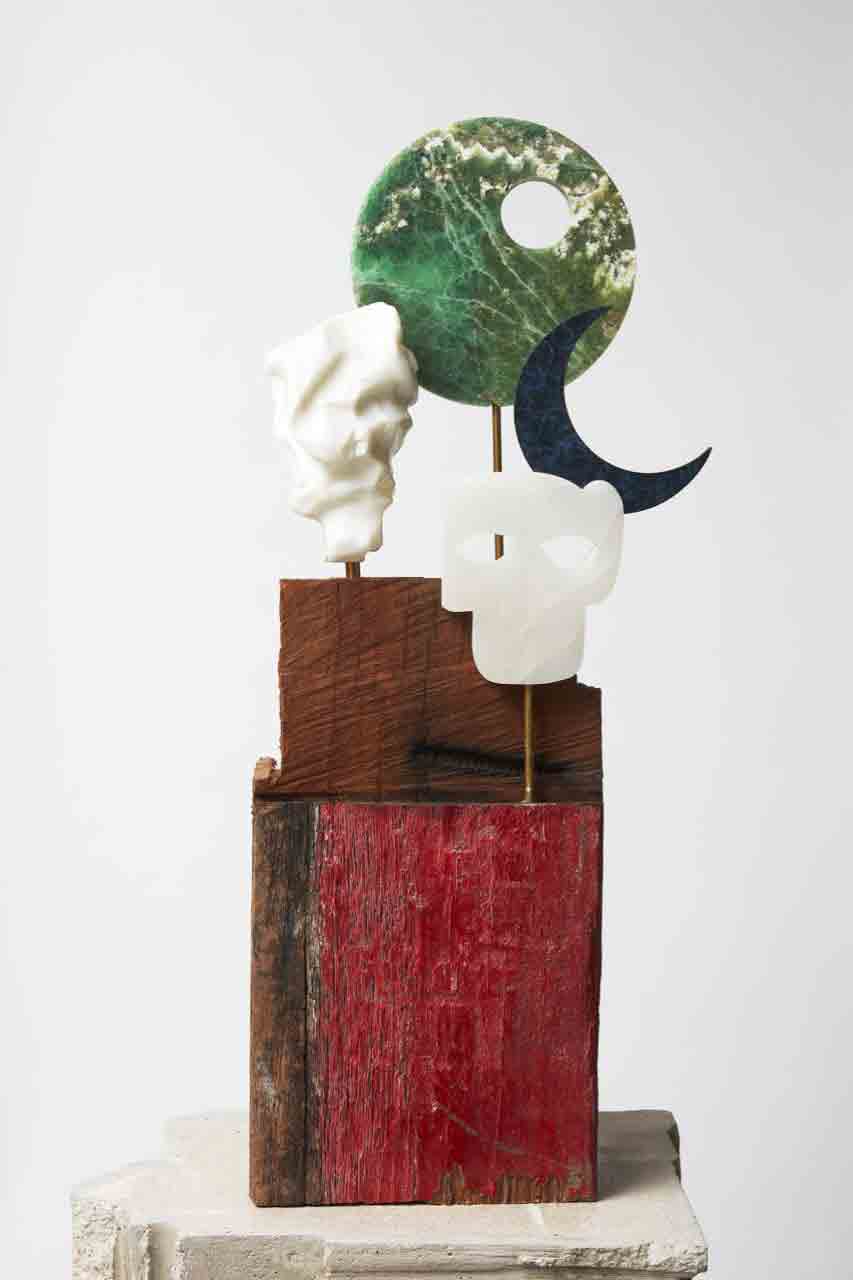 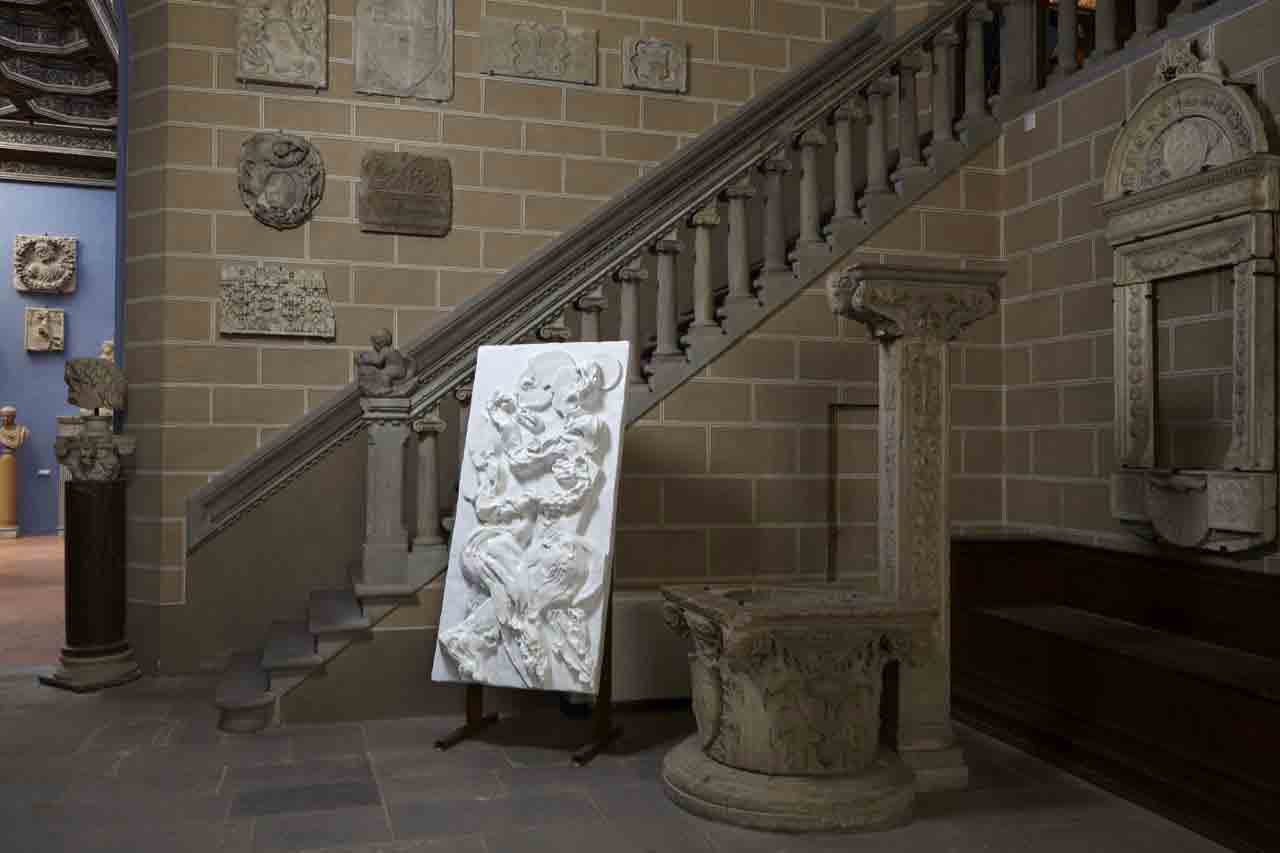 Gray, originally from South Armagh in Northern Ireland, studied art in Dublin, Chicago and Goldsmiths, eventually settling in London and where he has one of his studios. The other is in Tuscany, where, under normal circumstances, he often spends between ten days to two weeks a month. Gray’s award-winning work has been shown in galleries and museums around the world. His first solo exhibition in Florence, Italy, exhibiting until Christmas 2020, sees his work presented alongside the illustrious Renaissance collection of Stefano Bardini, the 19th century antiquarian, at the Museo Stefano Bardini. When we speak, we begin by talking about the laborious process of working with marble.

Trisha D’Hoker: Working with marble must be quite a slow process. Do you use the old traditional ways?
Kevin Francis Gray: I work with both methods. When I started working with marble I worked with the old pointing method which was created by Canova, the process he used when making the Three Graces.

TDH: Is this where there are little markers all over?
KFG: It’s almost like a compass system where, in this beautifully complicated way, points from the plaster model are used as a reference, via thousands of little pencil marks, to dig away at the stone and find the sculpture within. That’s one way of working that I’ve been doing for a long time. But I’m also using more modern ways where I use a machine to help take away a lot of the stone, which gives me a very raw form of the sculpture. Then I’ll finish by hand. So it varies, depending on what I’m working on. But both are extremely long and extremely arduous tasks.

TDH: With these new works, you are relying on the material itself in a way you haven’t in the past.
KFG: Yes. When I started working with stone, and really as a sculptor, I felt there was an insecurity I had as an artist where I wanted to be able to prove to myself and sort of prove to the artisans I was working with in Italy that I could do work that was representational, that sort of looked like what it was meant to represent. Realistic. With having worked that way over the past few years, I prob shouldn’t be saying this, you’re always meant to be really confident about your work, but it’s taken me years to have the confidence to be able to go more into abstract and gestural, and really lose that need to make work that looks like what it’s meant to look like. I think that’s a lot to do with me as an artist, as a human being, but also as a sculptor where I feel the work has more of a conceptual and contemporary challenge to it, in that abstraction. So that’s why the idea of the model and what the model represented became a little less relative and important to me and what the work actually meant became more important.

TDH: You currently have an exhibition going on in Italy as well.
KFG: That’s correct. I’m doing a show there now in the absolutely beautiful Museo Stefano Bardini. Bardini was a very eclectic and eccentric antiquarian art collector in the 19th century and his collection is absolutely magnificent. It was really an extremely intimidating show to do because having a studio in Tuscany and then doing a show with contemporary marble works in bloody Florence – as you can imagine, it was fucking terrifying!

TDH: No pressure!
KFG: Yeah, no pressure, right?! But it was one of those things where I put a lot of energy into it and it took a lot out of me but it really felt like it was the right moment for me to do it. Because for me it wasn’t about myself, it was the work that was ready, ready to take on the challenge of sitting beside a Donatello. And not because it could compete with the Donatello because it wasn’t trying to compete with any of the works in the museum. I remember going into the show when it first opened, going in alone, and it really felt like these works had this almost arrogance about them, that they were ready to take on the challenge of sitting beside all these great masters. The way the works have been curated really speaks about this moment, about us, where we are now. It felt like my works were being viewed rather than objectified by these Renaissance masters; more like they were being looked at, rather than looked down upon. So it felt great.

TDH: Maybe we are more free to do that in the 21st century, rather than compete with huge egos and this need to dominate.
KFG: I think that’s right. And really what I’ve been trying to do in my work is to move away from that – that grotesque masculinity of Michelangelo and all those masters and that mentality – and try to bring out those things that are much more salient and relevant to us as human beings right now rather than all that grandiosity. I think there’s something much more beautiful about talking about insecurities and fragilities and tenderness rather than all this big ego all the time.

TDH: You’ve used different materials as well in this exhibition.
KFG: I have. What I really wanted to do with these Breakdown Works was to take away that importance of the marble. You know that historical importance and all the weight marble as a material carries with it. I wanted to burrow down and look at the importance of that. In the last few years, in as much as I can, I try not to not take stone from the mountain. Instead I have been buying really ancient stones that have been laying around the yards of these old artisans’ marble studios for years. The problem is my percentages of getting good marble is like 20%. But I’m also buying old pieces of stone, old pieces of onyx, quartz, and I’m using those too. It feels like I’m rebirthing sculptures from these things that were thrown aside and I think that’s really something. It also brings in that narrative of waste and consumers and that whole thing of ripping mother-stone from the mountain. And I think this show is very much about that.

TDH: It is quite a team effort, isn’t it.
KFG: It really is. I’ve got an incredible studio manager, Anakena Paddon, who works for me in London and the gallery (Pace) are incredibly supportive, as are the team in Tuscany.

TDH: Can you tell me a little about how the team in Tuscany works?
KFG: Absolutely. In order for me to make my work I need people to help me. If you think about an artist like Michelangelo – during his lifetime if he had made his work from start to finish he would probably only have been able to make three or four pieces, because of the magnitude of the work. He was one of those artists who really rarely actually touched the stone itself. He had a studio with fifty artisans who worked for him and produced these magnificent masterpieces. Mine, obviously in comparison much smaller, but also different in that I really feel my hands need to be on the work, which is why I spend so much time there.

The female artisan who runs the studio in Pietrasantra, Jessica Ielpo, is one of the few women working in the field, and I am very honoured to have her with us. As you can imagine, historically all the artisans in this part of Italy would be men. Jessica blocks out most of the work then I go in and do all the fine detailing, the real specialised work. I have a polisher who polishes the work, sometimes two, sometimes three. Then sometimes there is another artisan who comes in and helps. So it can be quite a lot of people involved with making one sculpture because everyone has a specific speciality. 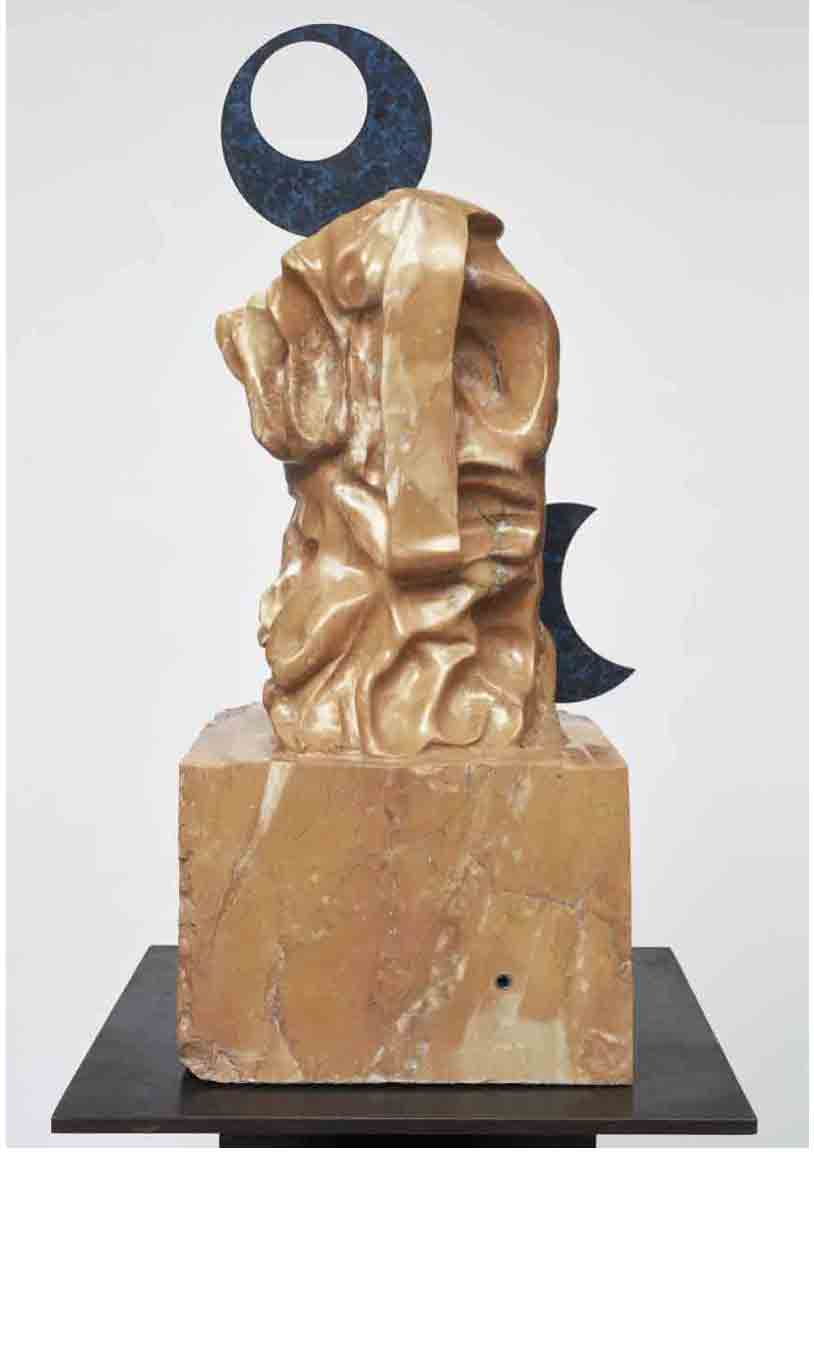 TDH: And you oversee the whole thing.
KFG: Yes, oversee and, importantly to me, participate very heavily in the process of making it.

TDH: You get your hands dirty.
KFG: You do get your hands really dirty but it’s also quite exhaustive, quite physical work as well. So when I am in Italy, the creativity is always there, but it’s almost like at this point the piece becomes a teenager, beginning to form itself and I’m there to help guide it through those teenage years and come out the other side, as the sculpture becomes fully formed. It’s that sort of experience.

TDH: I was thinking about life and sculpture – how, if we are fortunate to live long lives, at the end we are the whittled down core, after life has chipped away everything around us.
KFG: I think that is such a profound and salient point. We really are going through life trying to discover ourselves in the same way I’m trying to discover the sculpture within the stone. I think that personally, there is a whole lot more chipping away to be done! But every work, every piece, everything I try to make, has so much, maybe to its detriment sometimes, but so much of my personal energy and troubles and dramas and complications and positivity and everything involved in it. It’s not therapeutic and it’s not art therapy, but I definitely feel I can expose myself through my work. And that’s why this exhibition with Pace is part of a whole series of work called the Breakdown Works – what I feel is a really honest, open expression of myself as a middle-aged man today trying to navigate life and family and career and exposing that vulnerability in that inability sometimes to be able to cope with it. I don’t know if you’ll agree, but I feel there is a kind of larger societal breakdown, some kind of global societal re-aligning or re-emergence we’re all going through.

TDH: The cracks are beginning to show.
KFG: Cracks in the stone! I think that’s maybe why there has been interest in this body of work now, because it is so personal and has moved away from the idea of traditional representation. It’s being just what it appears to be, and, in the process, offering something a bit more. 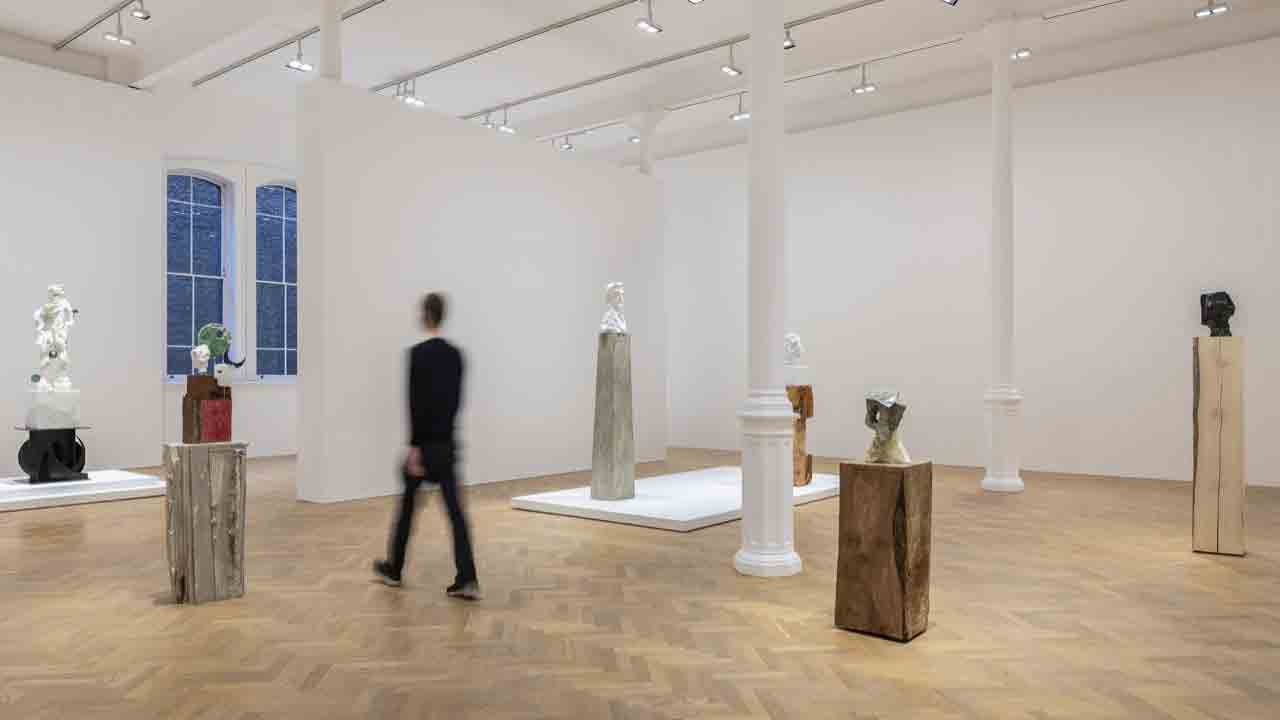 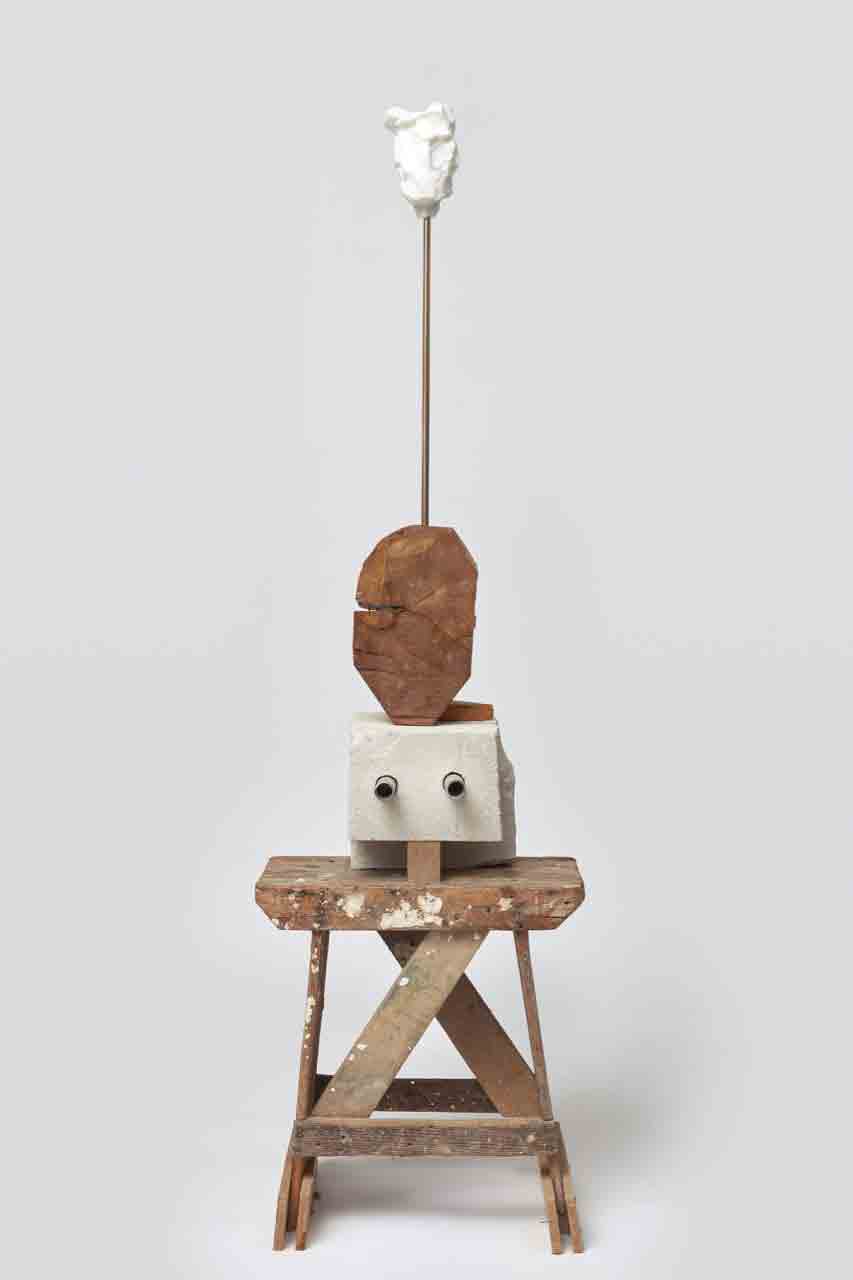