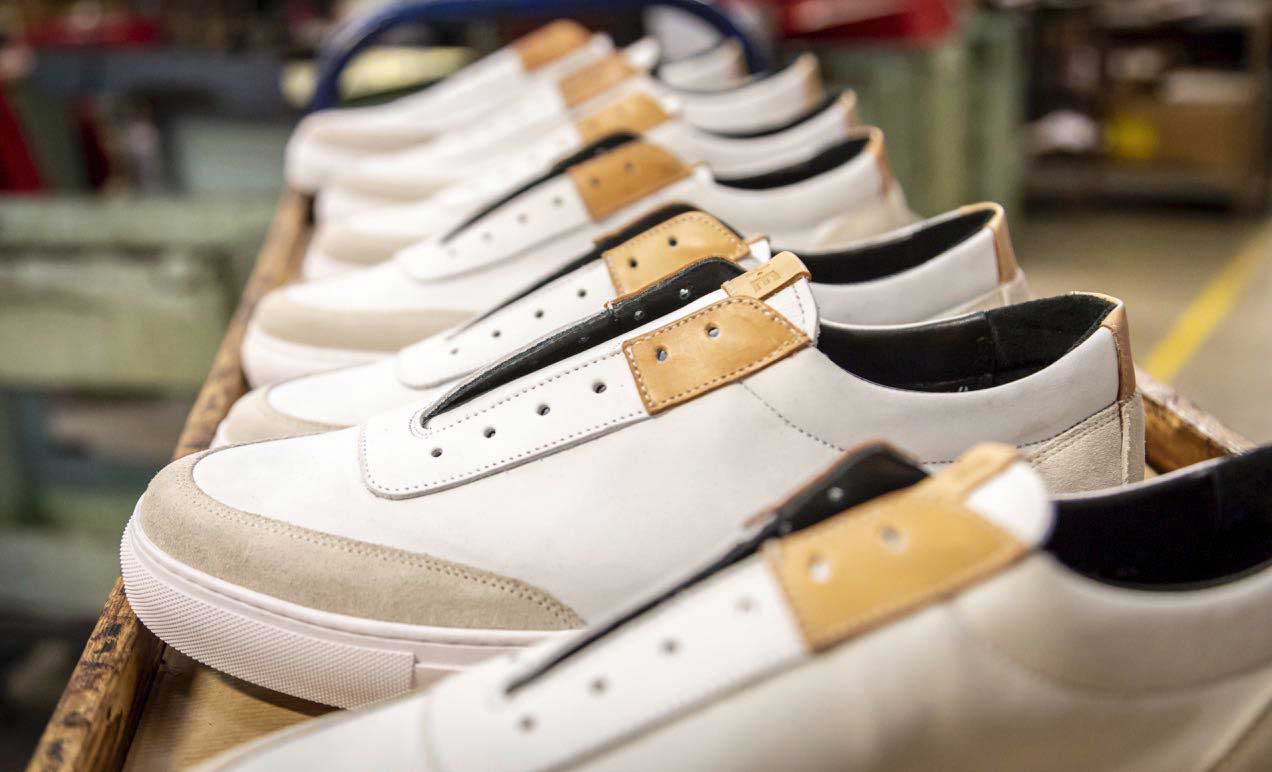 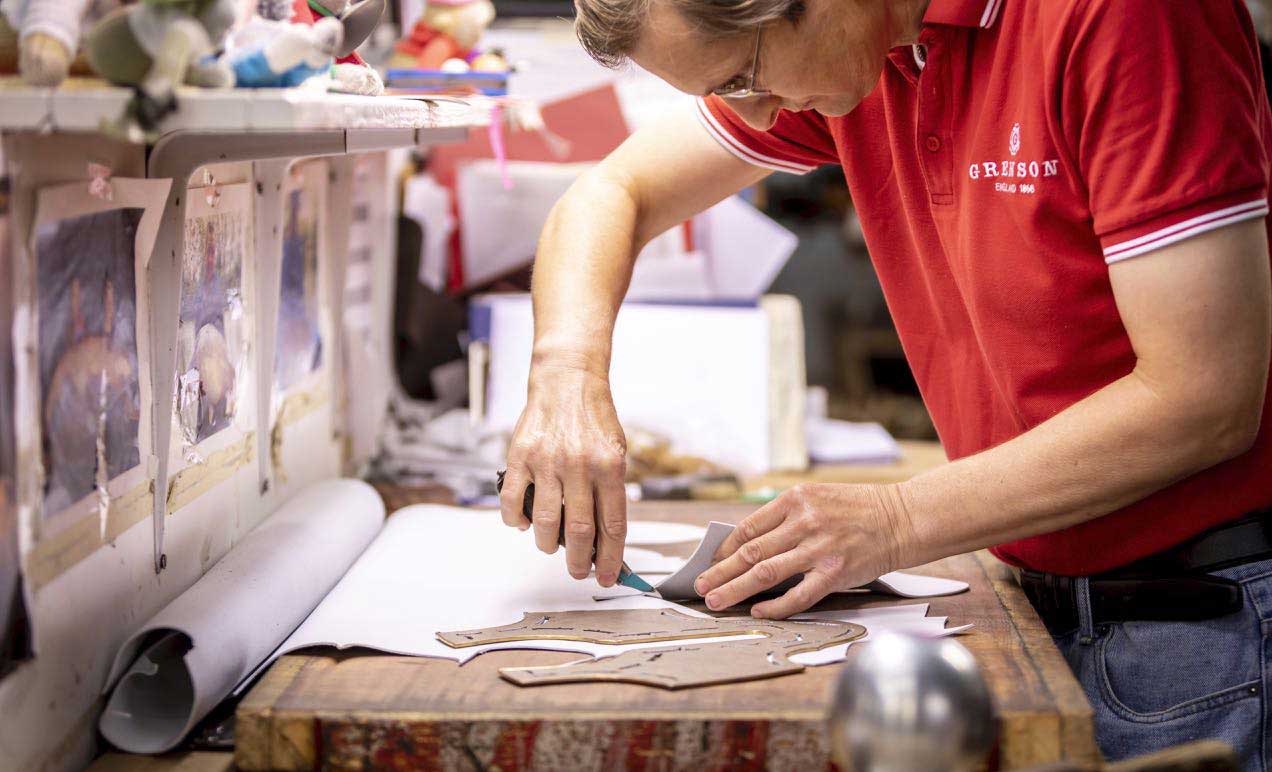 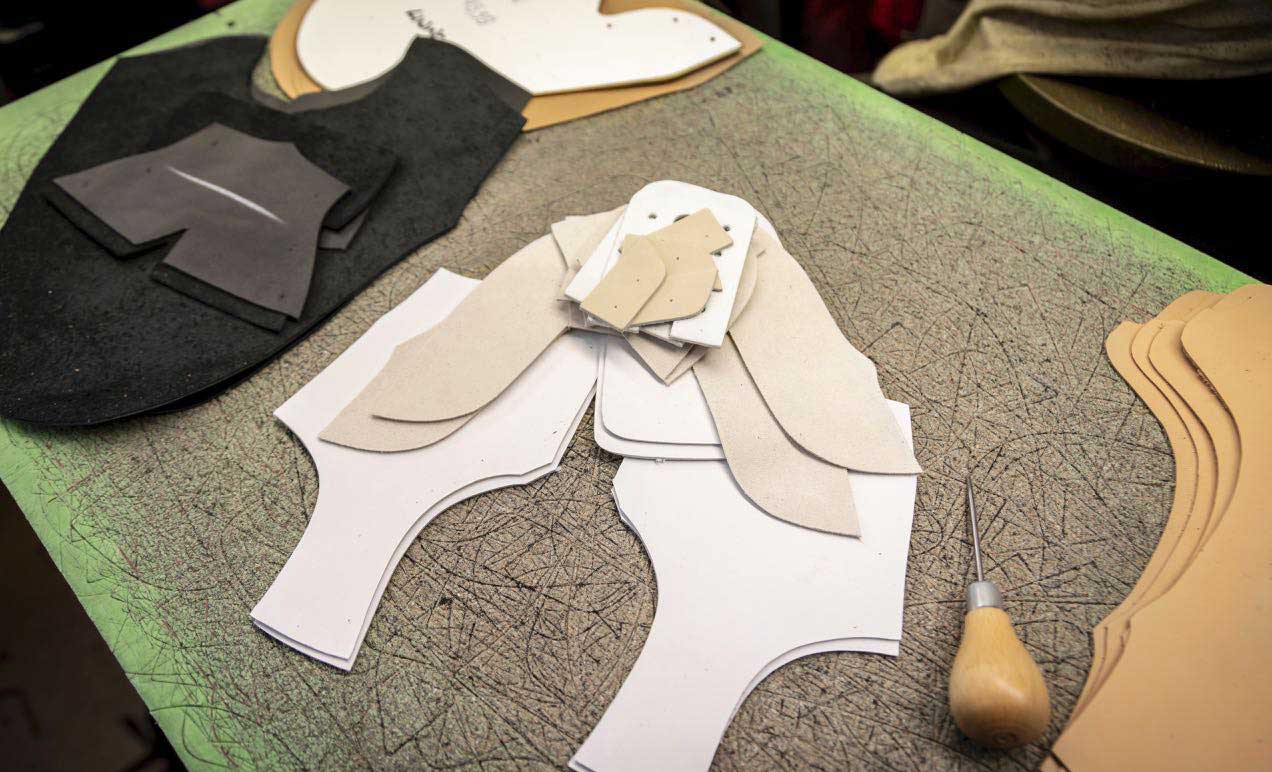 Leather pieces of the Grenson M.I.E. (Made In England) sneaker pattern 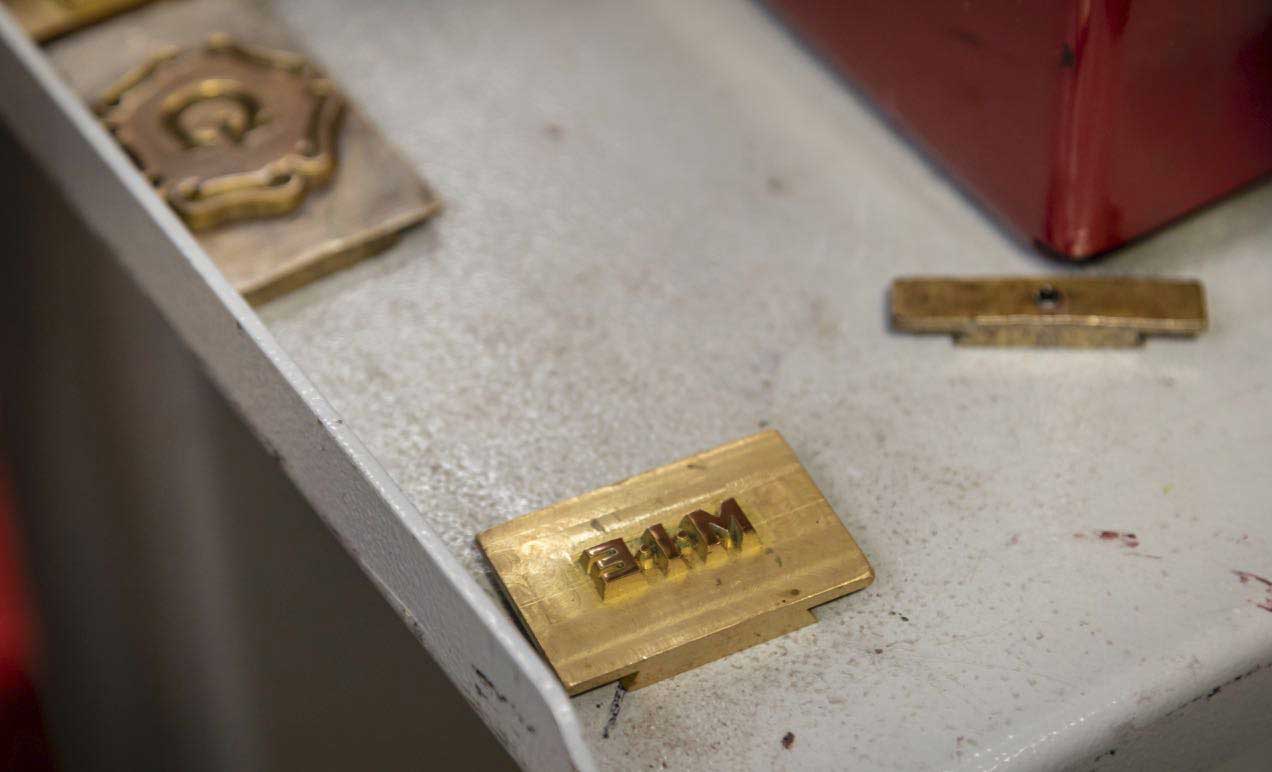 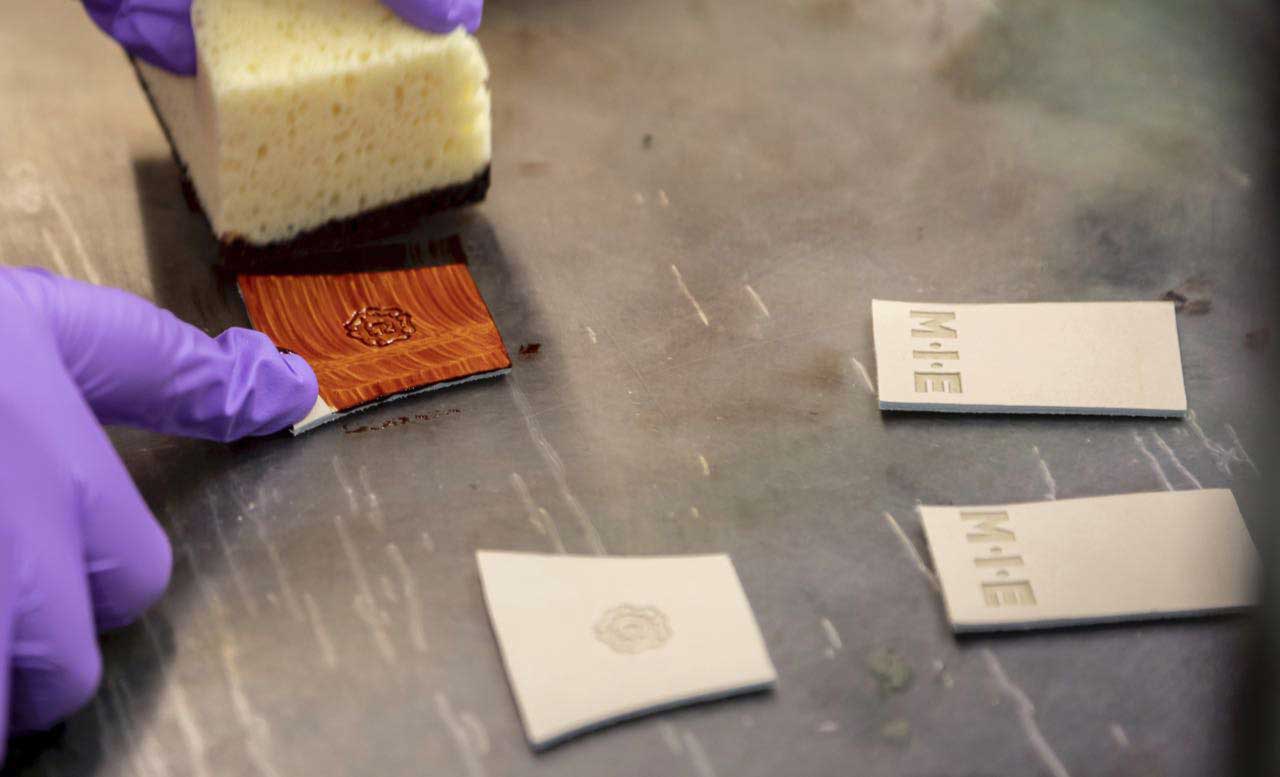 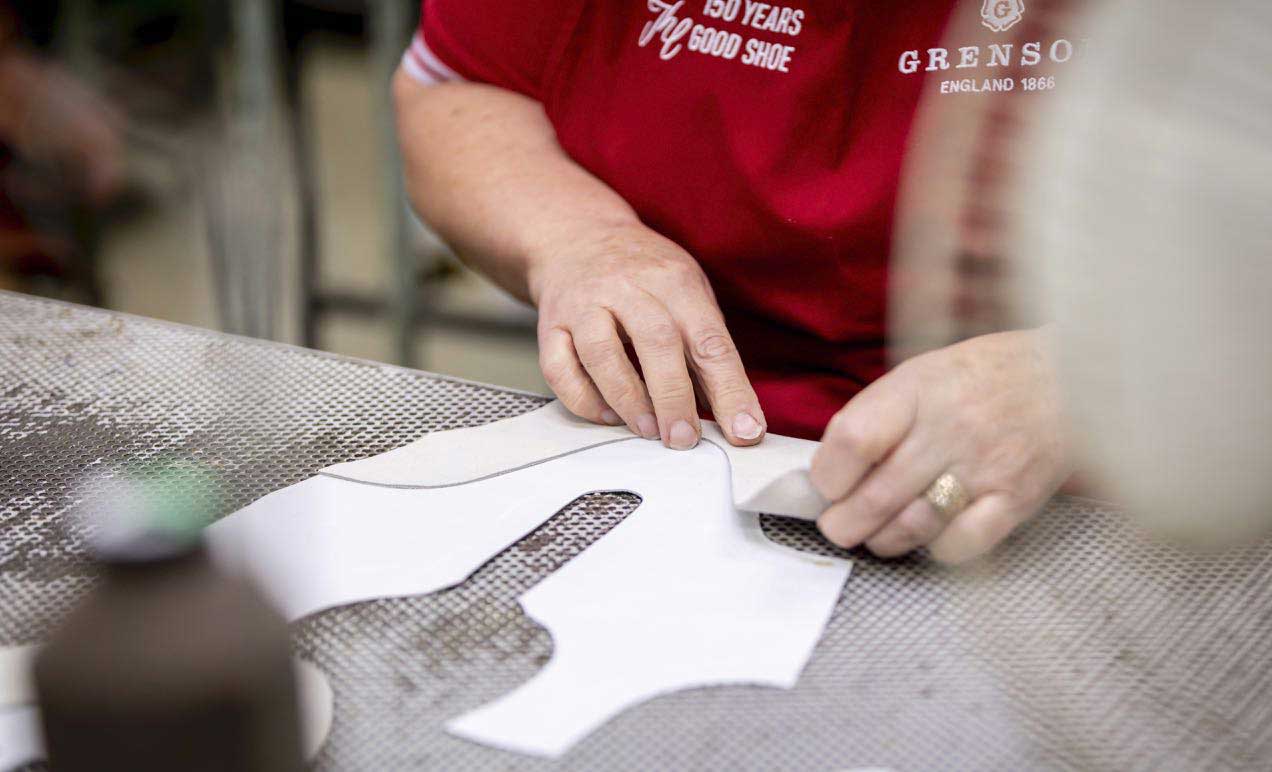 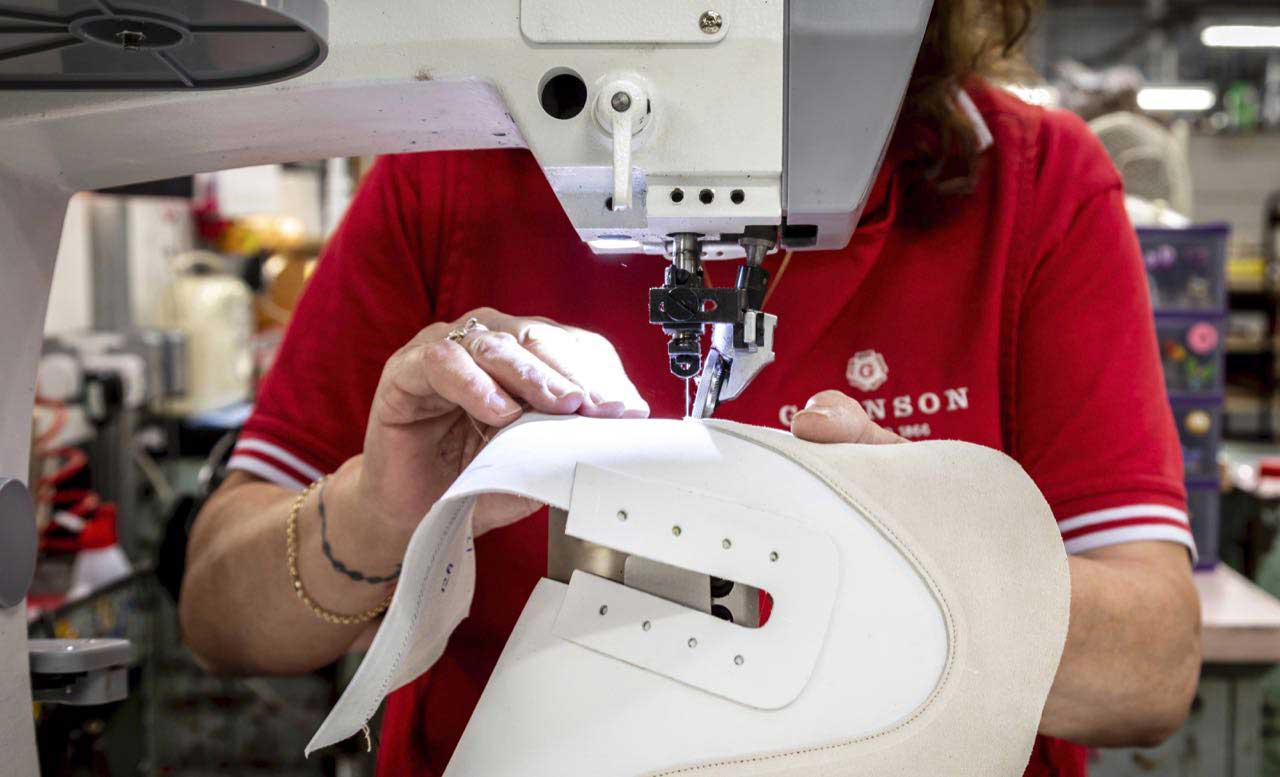 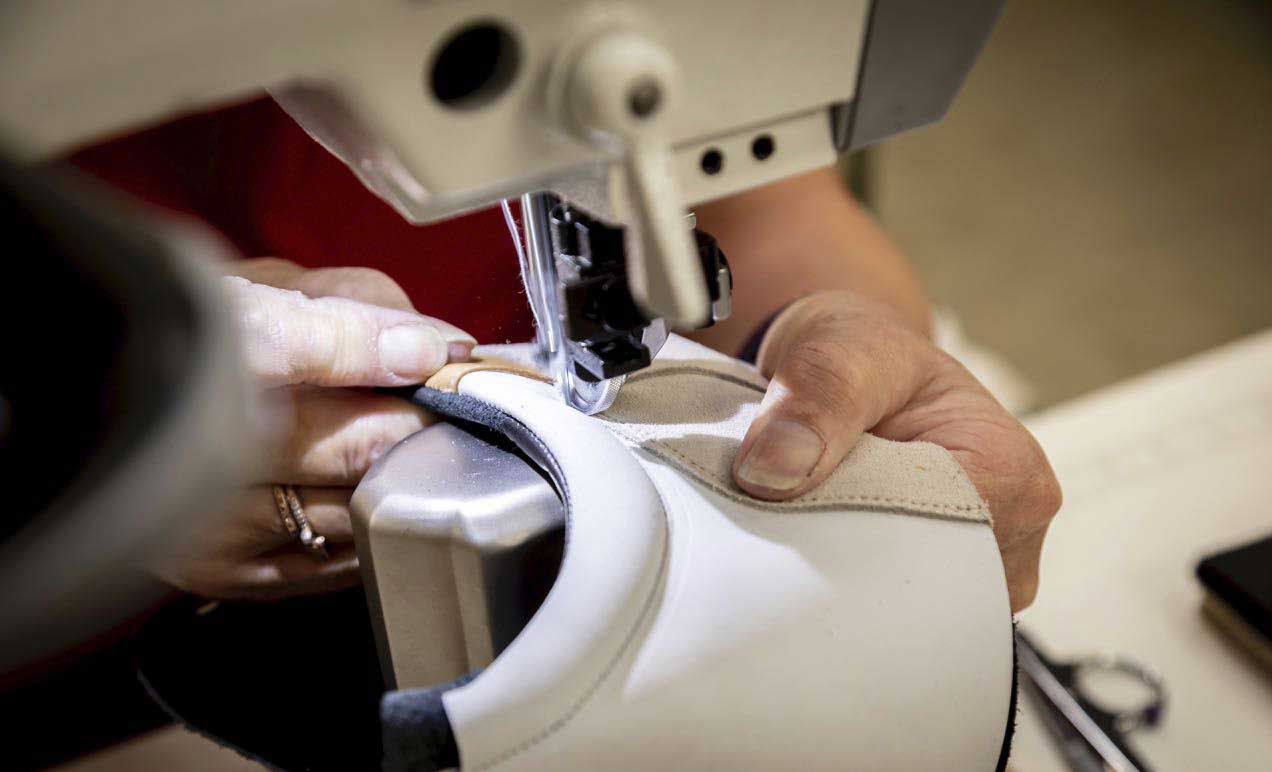 Stitching the heel counter to the upper of the shoe 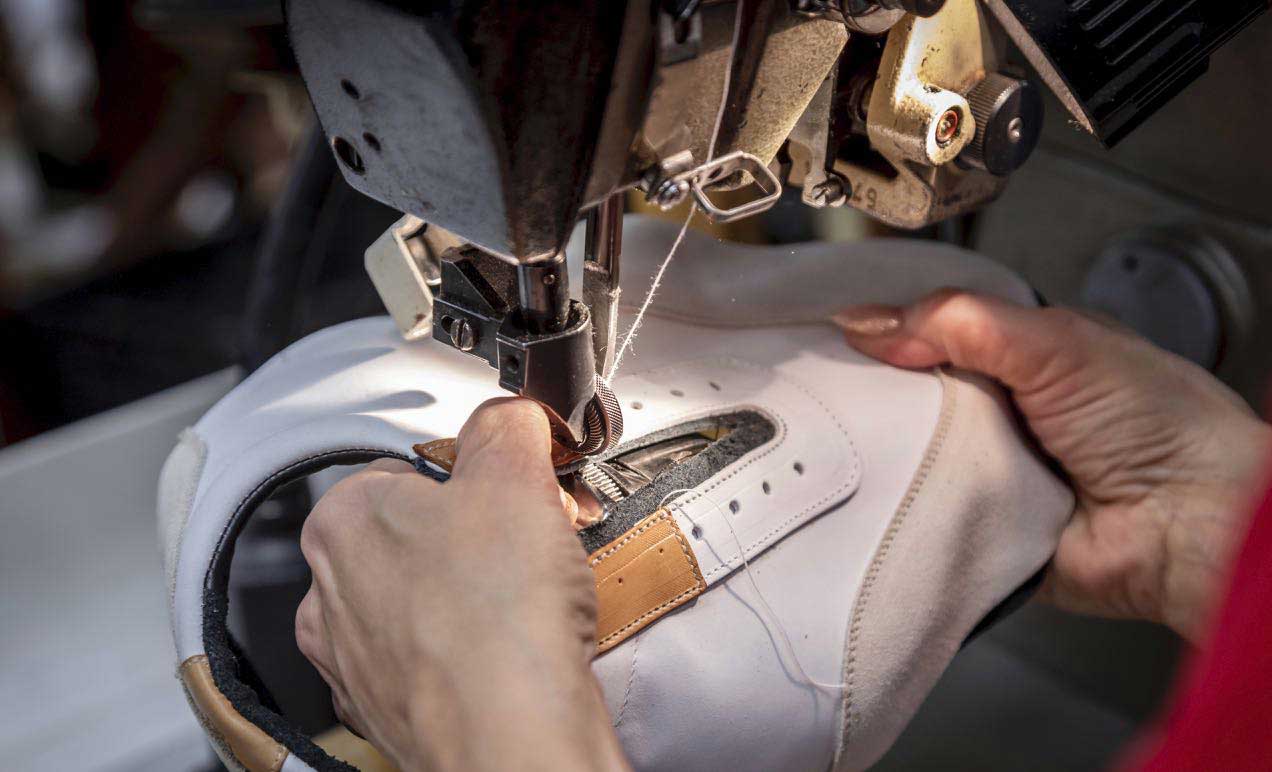 Stitching the facings onto the uppers 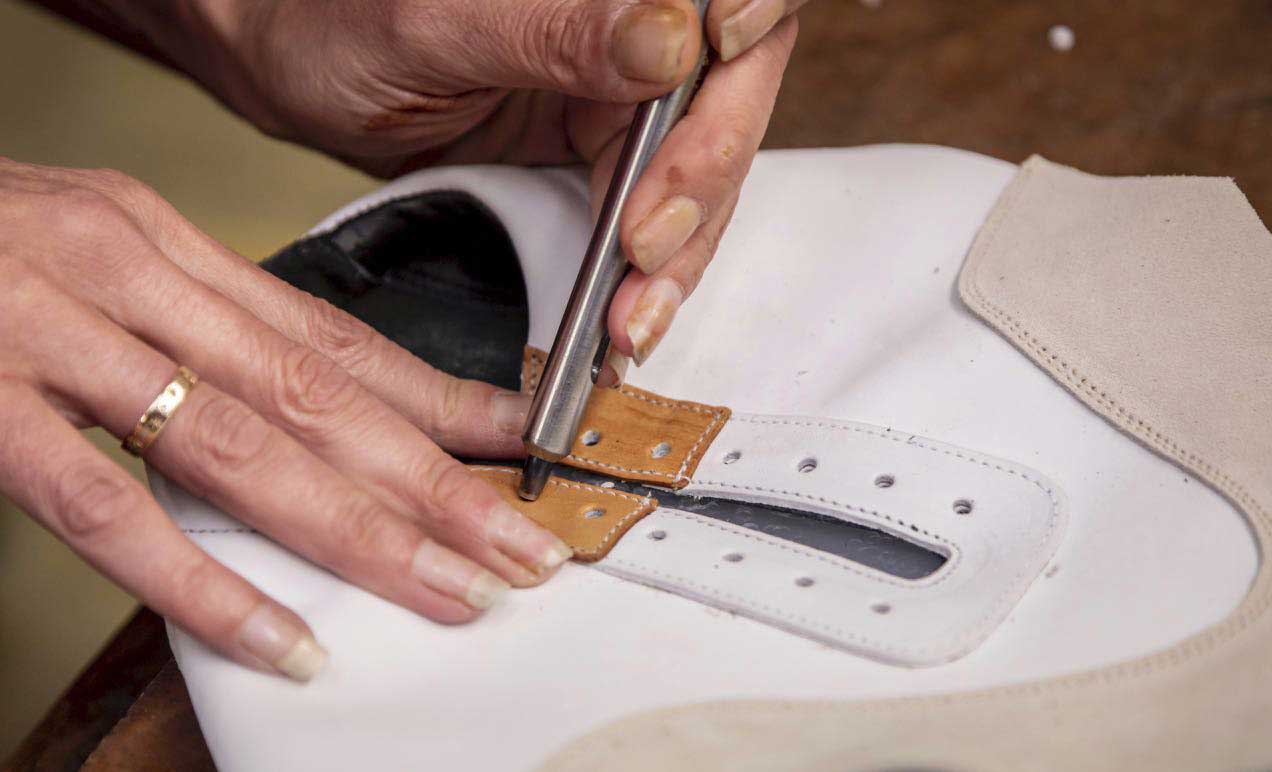 Punching out the eyelets

About 18 months ago, I had a thought.

What would happen if the traditional craftsmen in the Grenson factory, who have made Goodyear Welted shoes for their whole working lives, were asked to make a sneaker?

Before I describe what happened, I need to provide a little background.

Shoemaking is split into many different types of construction. Shoe types such as Goodyear Welted, Blake sewn, Moccasins, Bologna, Sandals, espadrilles, sneakers and so on, tend to be made by factories that specialise in one of those types of shoe. Their craftsmen have learned to make a single style over many years and are very proficient at it. They rarely make anything else and they rarely move jobs to a factory making a different type of shoe. If you are a Goodyear craftsman, you are that for life.

Also, in shoemaking terms, a sneaker and a brogue in particular, are chalk and cheese. Factories who make traditional bench-made Brogues barely know what a sneaker is, in fact, they even look down on them (so to speak). Asking our guys to make a sneaker was a bit like asking a Man United fan to wear a Man City shirt.

Personally, I have never been snobbish about shoe types and love sneakers as much as Welted shoes but for different reasons. And I’ve always worn both. In a previous life, I ran the Adidas advertising account and worked with them to make the brand cool again after many years of being ravaged by Nike. So although I wasn’t a fully subscribed sneaker geek, I was at least a sympathiser. To me, the idea of Grenson making sneakers seemed sensible. After all, we are shoemakers, so why not apply our craft to the biggest selling shoe type on the planet? 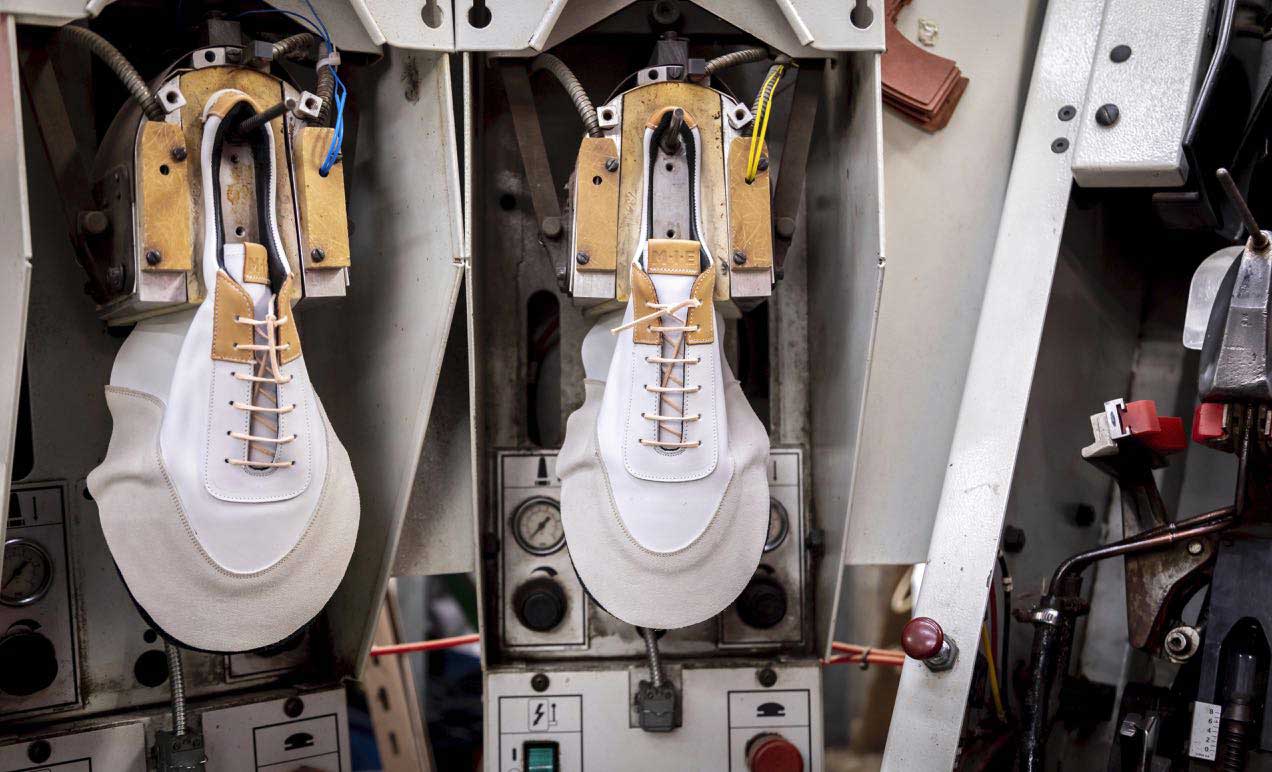 Leather uppers on the lasting machine

The other part of the story is that I’d had a similar thought many years earlier when I contacted New Balance to ask them if they would like to make a shoe together. My thought was that they were making sneakers in the UK (one of very few factories), and we were making Brogues. What if we made a New Balance sneaker – half in our factory and half in theirs?

The result – a New Balance sneaker that was half made in the Grenson factory. It was a thing of beauty to me: a shoe created by two very different types of shoe factories coming together to make a single product.

So asking them to make sneakers could go either way.

But here’s the thing about craftsmen – they love a challenge. They love to try things with their craft, they love to experiment, to flex their creative muscles. They enjoy showing off what they can do. So when I said that I assume we couldn’t make a sneaker, they began to think. I lightly dropped it into the conversation one day, “I wonder if a factory like ours could ever work out how to make a sneaker?” 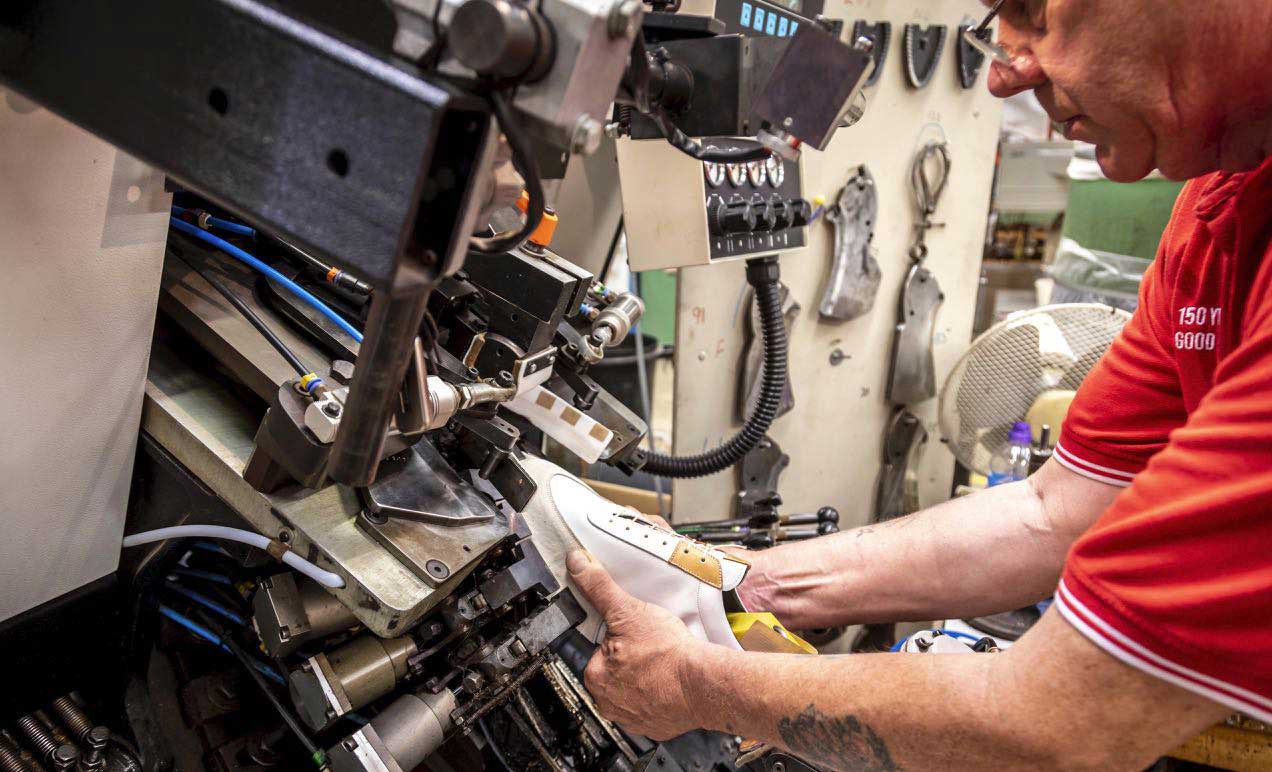 About two weeks later one of them asked me, “Were you serious about the sneaker question?”
“Yes,” I said, “I think it would be really cool, but I don’t want to force it on the factory.”
“Well there’s no harm in having a go,” he said.

And so it began.

As it turned out, it went very well. They made all of the bits they knew in the same way as they always do and then learned the bits that they didn’t. So basically the upper of the shoe can be made the same way as we make a brogue. We can use the same top quality calf, and the same quality linings. We can cut the leather by hand as we always do, and we can stitch it with our usual finesse. This meant that we would produce a shoe that had all of the quality of a bench made brogue but the comfort and practicality of a sneaker sole.

The tricky part was the sole. Basically every shoe construction is defined by how the sole and the upper are attached. This is the bit where the learning had to come in. So we cut open a few sneakers to look at how they were made and decided that the type that worked for us was the cup sole sneaker. This is the type of sneaker that has a rubber sole, like a cup, that the upper sits into. A runner, in contrast, has a cushioned sole that is cemented onto the bottom of the shoe. The cup sole sneaker is the type like a Stan Smith, for example, and it requires cementing the upper into the sole and then stitching the sole to the upper for extra strength. This is where we needed to invest in new machinery and learn new skills.

We called our machinery supplier, who was a little surprised that we wanted a sneaker machine, but we did a deal and two weeks later the machine arrived. 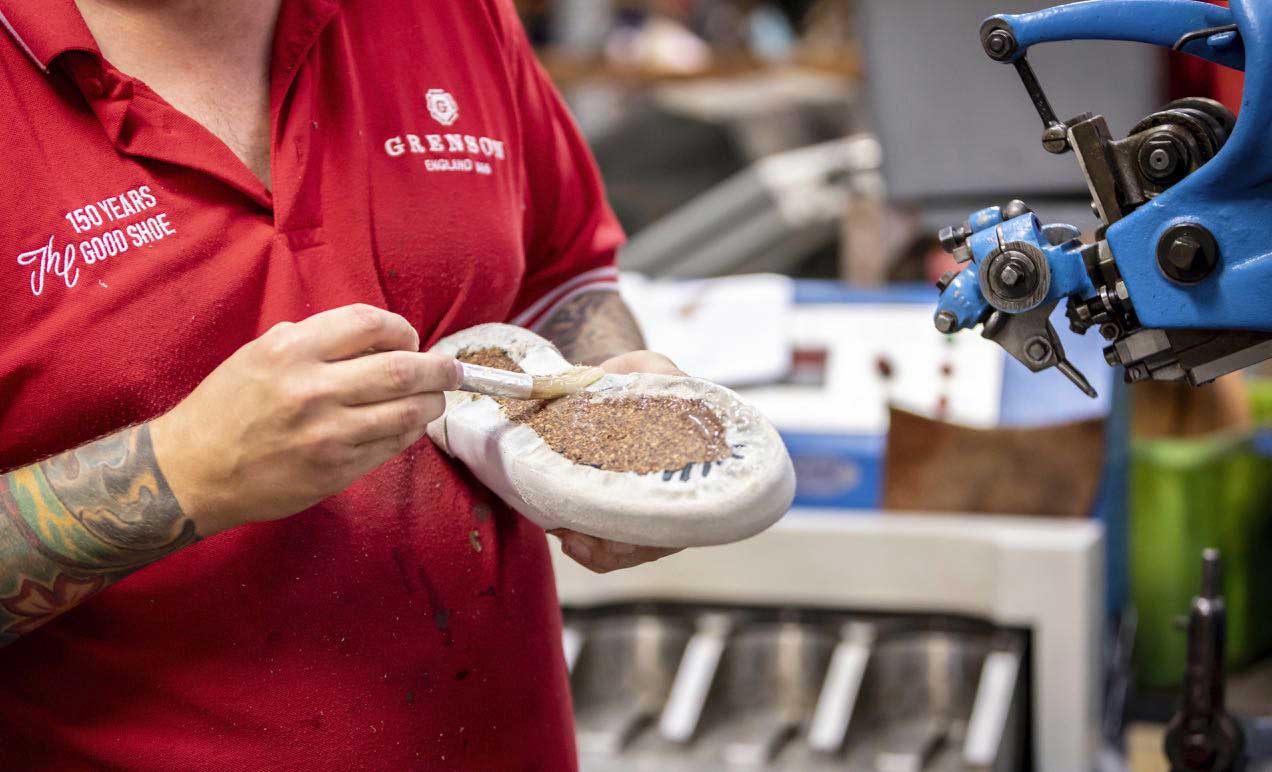 Gluing the uppers before apply the sole

As it was installed, there was a strange atmosphere in the factory. It was as if an alien had landed in the car park. It looked like one of our machines but somehow it was different.

We set to work trying to make shoes but the first few pairs looked like a high school project. The stitching was wonky, the sole didn’t fit properly and the upper pattern didn’t sit right on the last – otherwise, it was just about a sneaker, of sorts.

Each time I came to the factory over the next couple of weeks, they would hand me a new version and each time it looked better. But they begged me not to take an order yet. Eventually, I asked them for a sample to take to the menswear show in Florence, just to get some views from buyers. They made me a perfect pair but warned that if they had to make 20 or more it would be more difficult. I showed it to a few buyers and they loved it, but I decided to make it just for ourselves to begin with, to take the pressure off.

The thing I still love about it is the idea of taking two competing styles and combining the best of both: the quality of the traditional bench-made upper with the sole of the sports shoe. Add to that the idea of retraining a factory so that it can add a whole new category (of production) and you have a very special, if small, innovation. 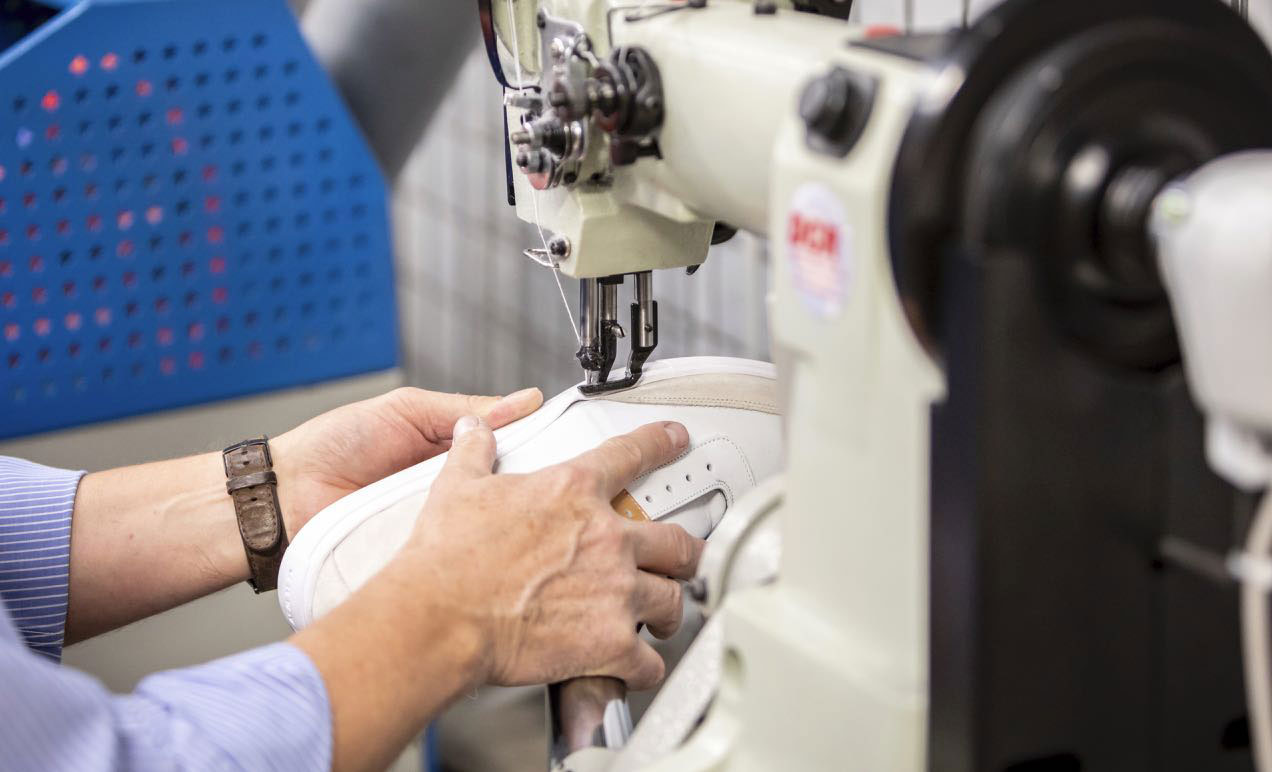 Stitching the soles to the uppers of the shoe 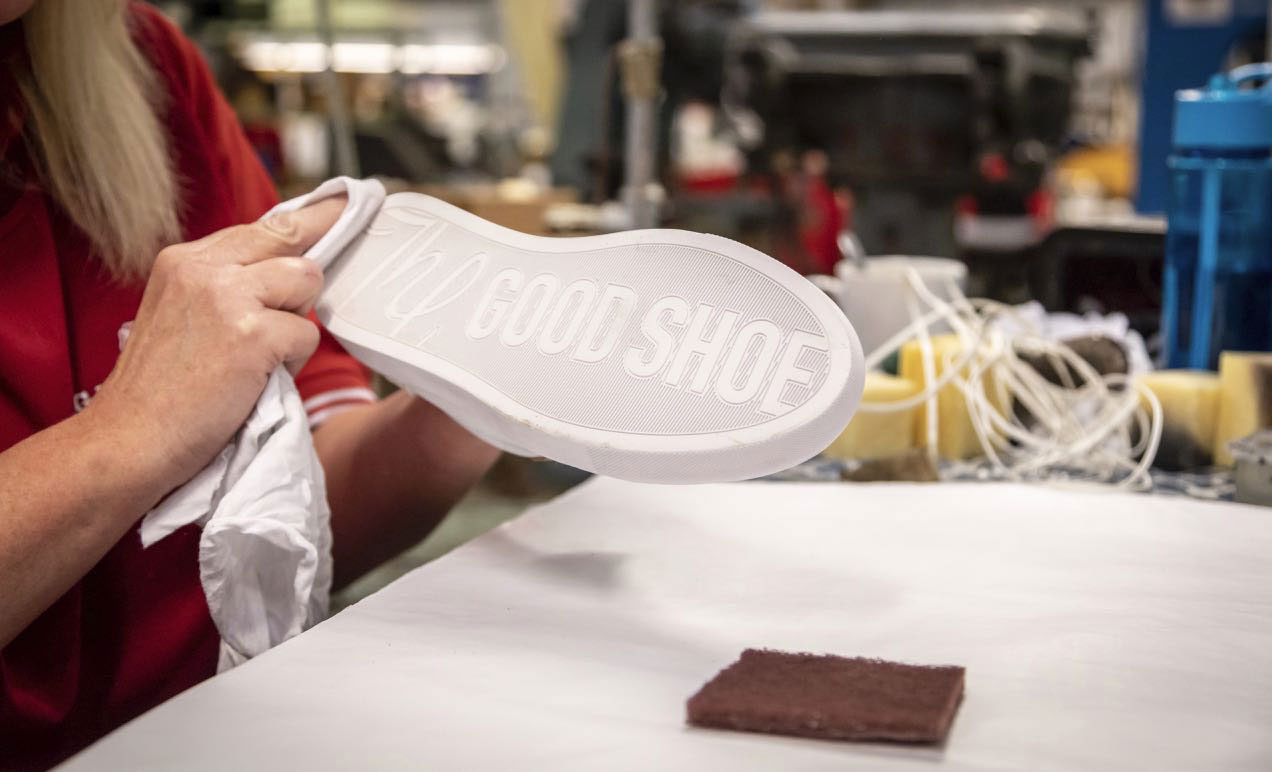 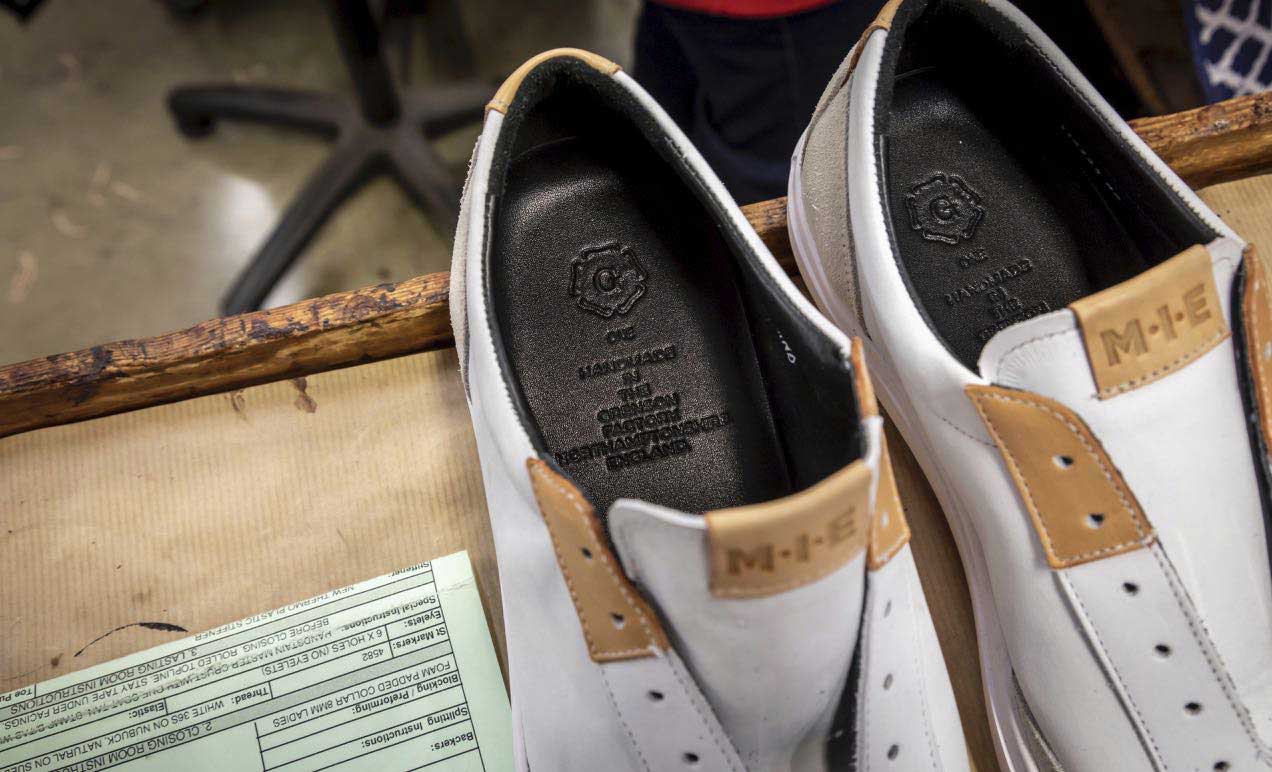 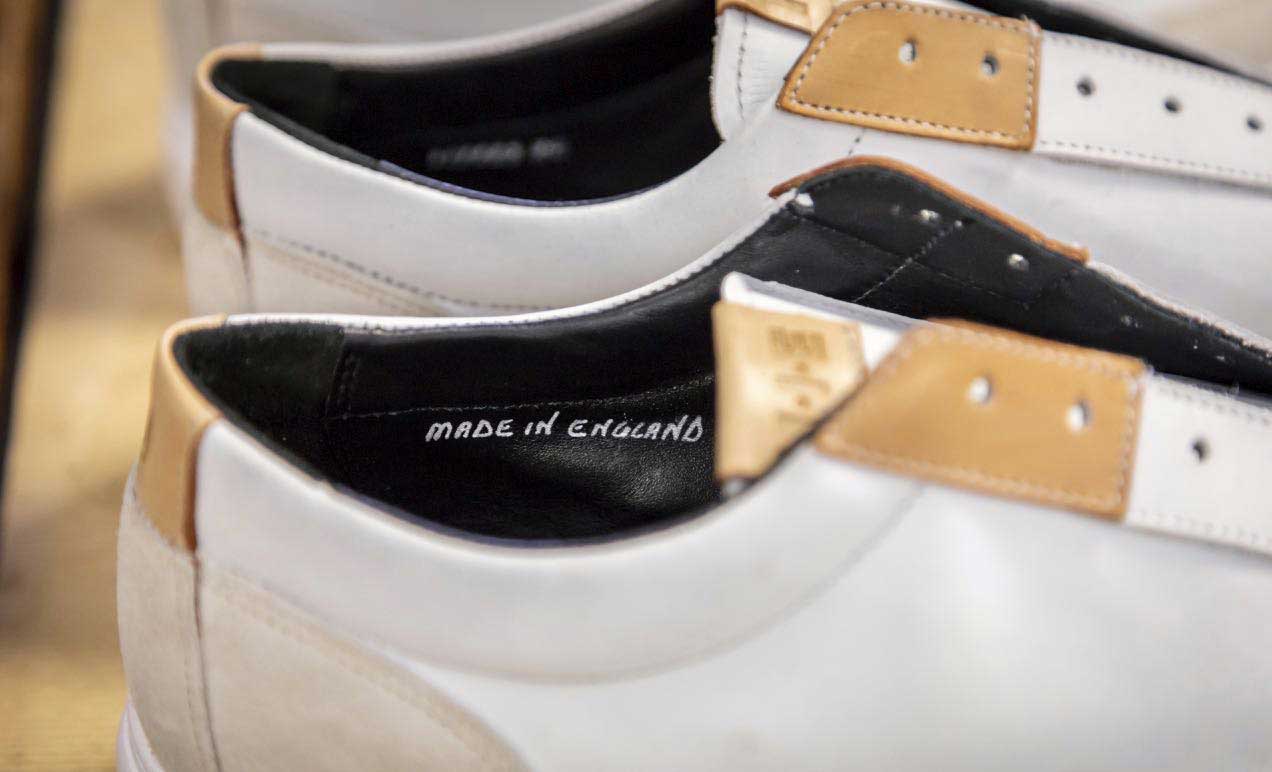 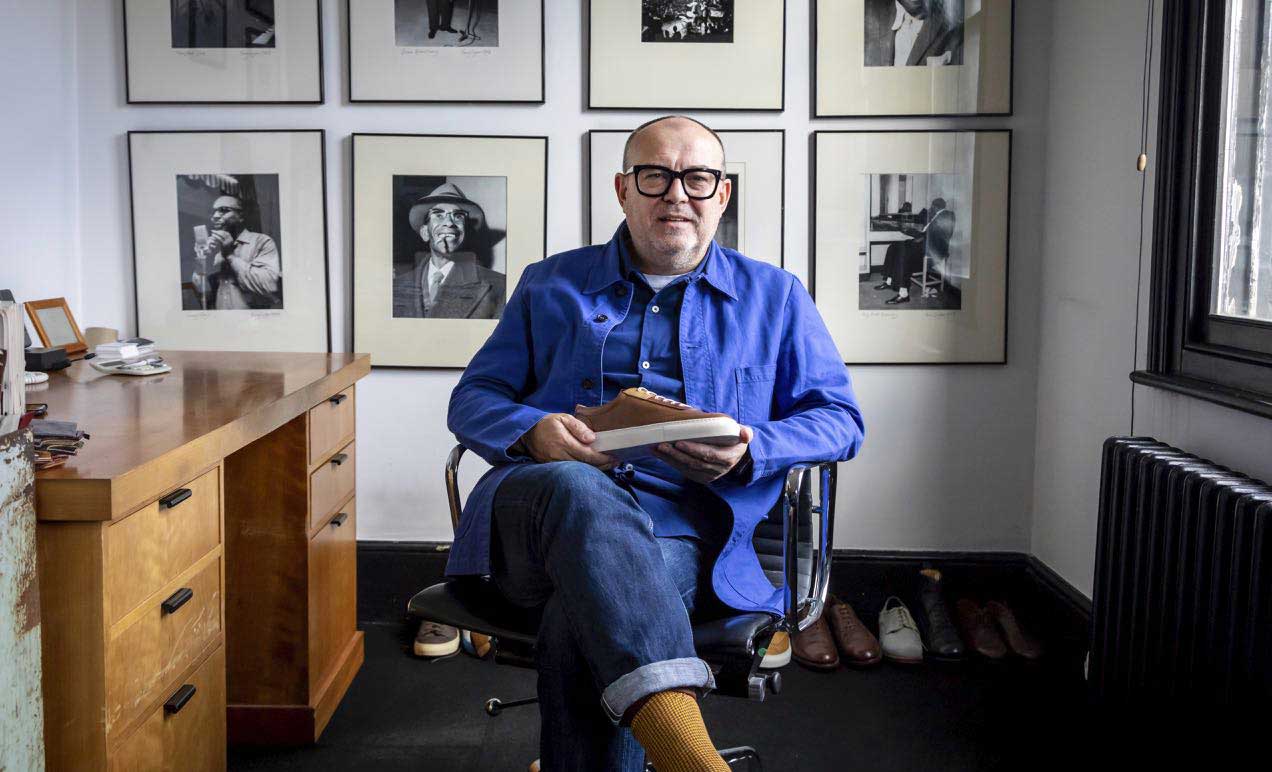 Tim Little in his office in West London, holding the new M.I.E. sneaker from the forthcoming Spring/Summer 2020 collection 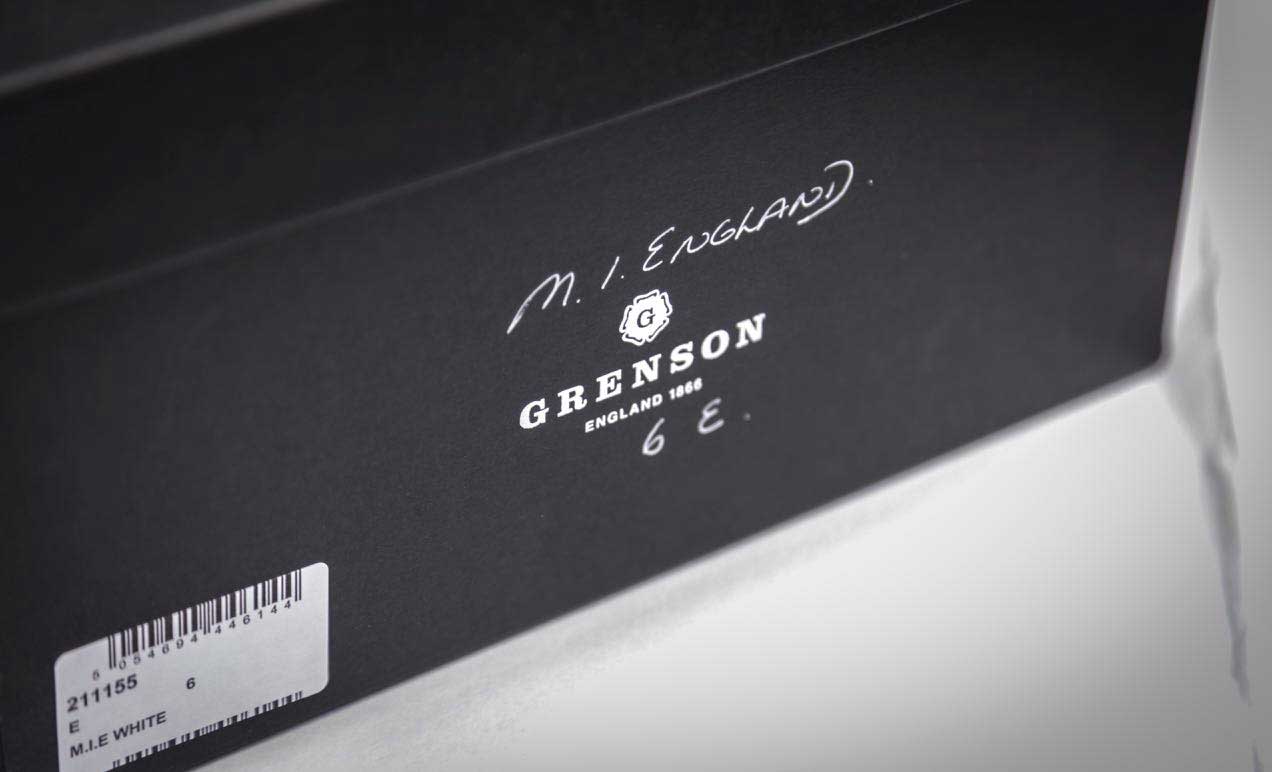