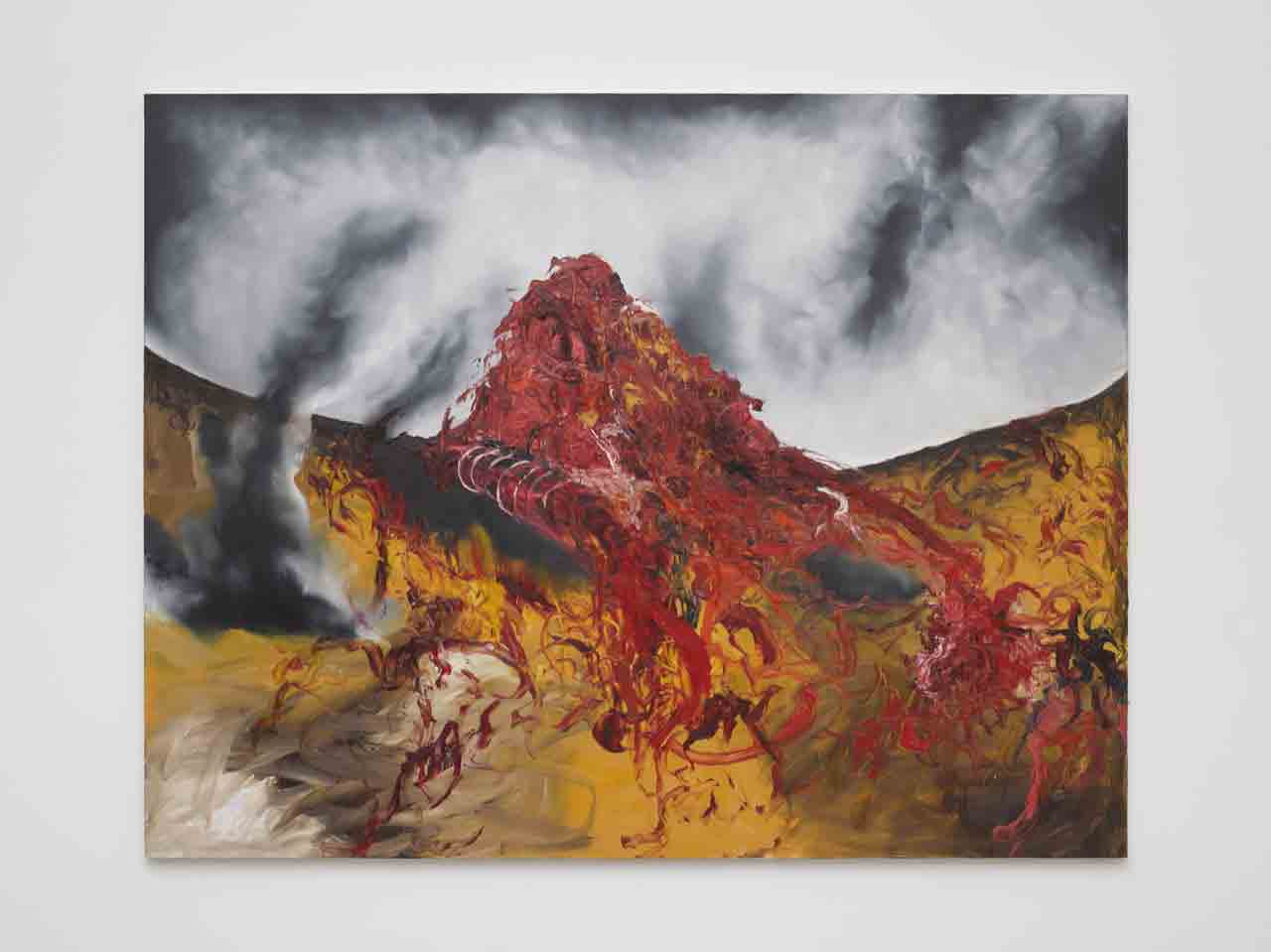 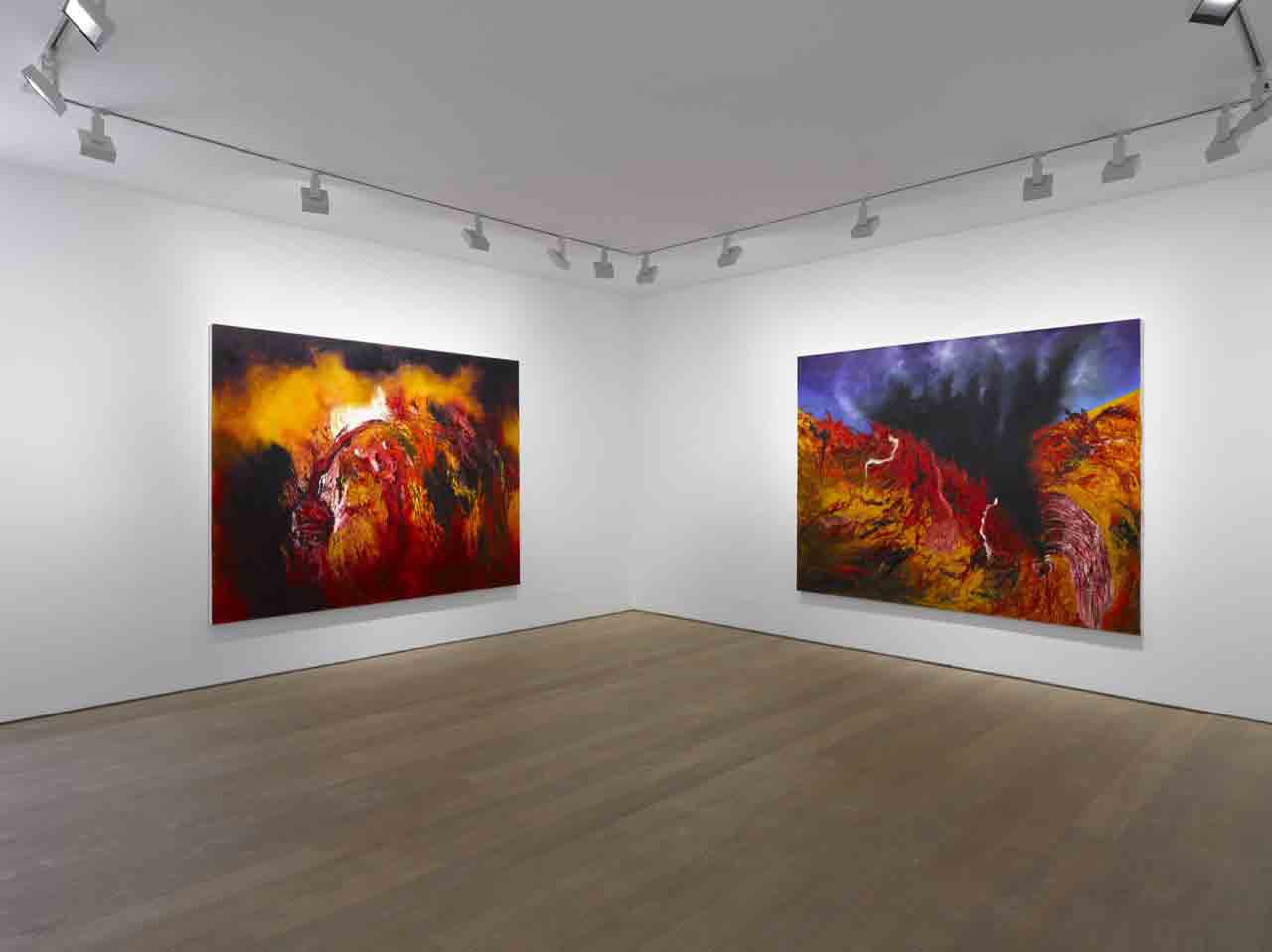 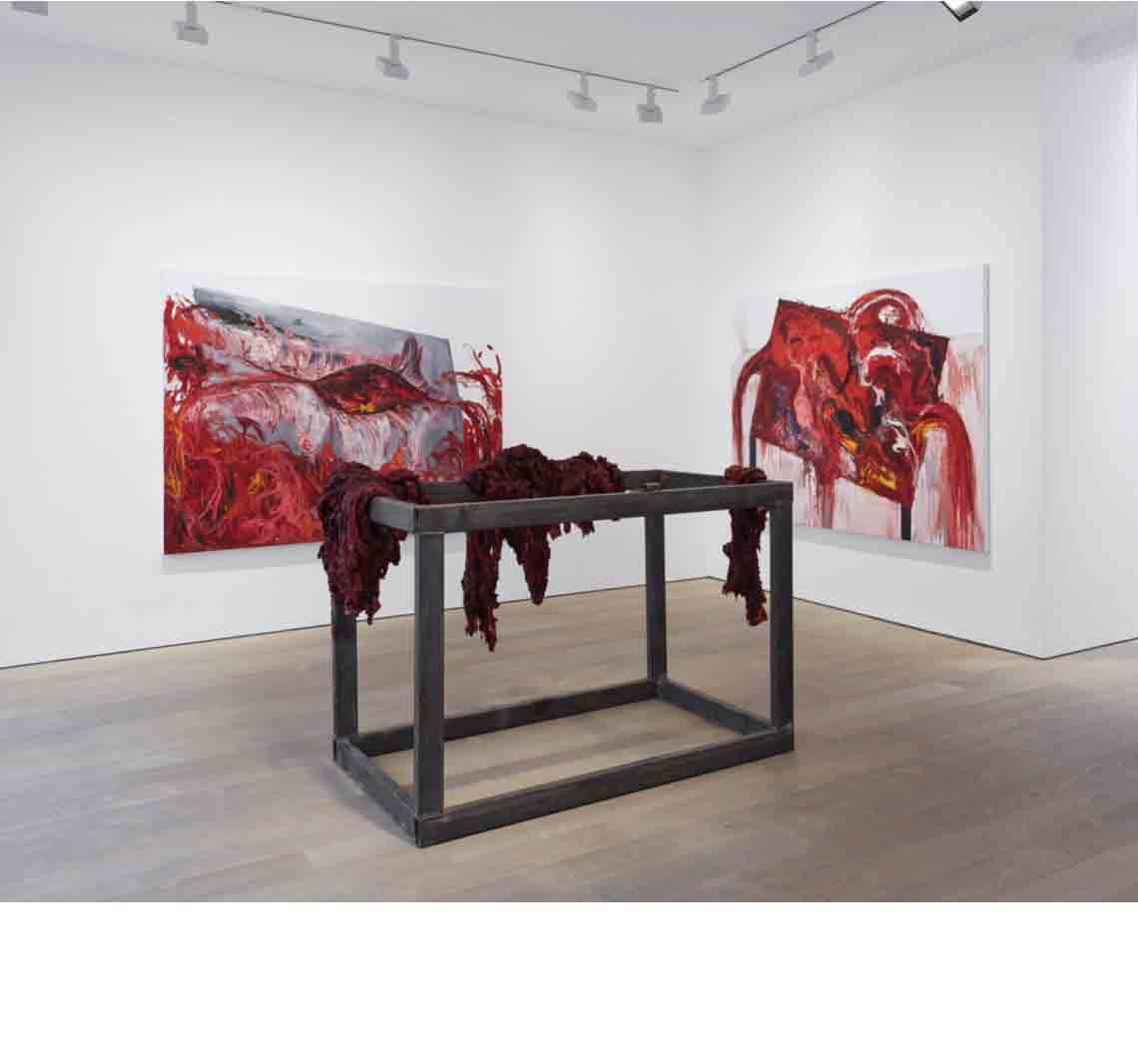 Alongside the exhibition at Lisson Gallery, which runs until 30 October, Kapoor’s paintings will also be exhibited at Modern Art Oxford, until February 2022. In April 2022, there will be a major retrospective at Gallerie dell’Accademia di Venezia, to coincide with the Venice Biennale.

We recently spoke to Elissa Goldstone, Associate Director at Lisson Gallery London about the exhibition.

Trisha D’Hoker: Anish is an artist known for not saying too much about his work. There are no labels, for example, beside the pieces.
Elissa Goldstone: That’s part of the not overtelling, allowing you to experience and to feel and then move into the work that way. It’s something that has come up in his work over the years. There’s been a kind of mythology around how these works are made, that they sort of self-generate or come from nowhere. With the mirrors, they are so perfect their edges almost dissolve. They really transcend their space. Like the wax train in his Royal Academy of Art exhibition, creating its own form by moving through the doorways. It’s this mythology of how something comes into being. Even with his early pigment works, there’s this sense of them holding their own identity, of having come into their own form of their own volition. That they’re more than just their own volume and more than just their material. You know they’re pigment on the floor, but they feel more. And the paintings themselves. You know that these are paintings but you don’t just read as images. You read them into yourself, connect internally. It stirs. And I think that’s where the paintings really connect, both with his own process of what he’s working through in his practice and also in the experience of being with them.

TDH: The pieces in the end gallery are so explosive, so alive.
EG: With all these works, to some extent, there is something happening in the foreground as well as in the background. With these, there’s this landscape-like horizon and it’s all quite ominous; I find it ominous. Stylistically they’re incredibly modern and contemporary, but they are also referring to a more classical tradition in that something has just happened; something is about to happen. Christ coming from the cross. Goya painting bodies in motion. That disturbance.

TDH: The idea of disturbance is interesting, with regards to sculpture v. paintings. Controlled or uncontrolled. Sculpture always feels more controlled – maybe with painting he can indulge more with being uncontrolled or giving the effect of.
EG: Absolutely. In the middle space, the sculpture there is in some ways incredibly controlled. It’s just a simple grid of steel and flayed silicone, very graphic, very simple, yet it is almost more heightened than if he had literally painted a flayed body. It’s very disturbing. The combination of materials in that form even feels like a barrier. Like an object of control.

The two paintings in that space are quite distinct from the other paintings in that they depict the space behind them, an interior space, so that in a way you are seeing the studio or corners of the room beyond the painting. In that respect I think they are the most personal. For me, I look at it and think, am I in the artist’s studio? Am I looking at the artist flayed before me? But I suppose you could look at them and say am I in the gallery space and is that me splayed before me? I don’t know. 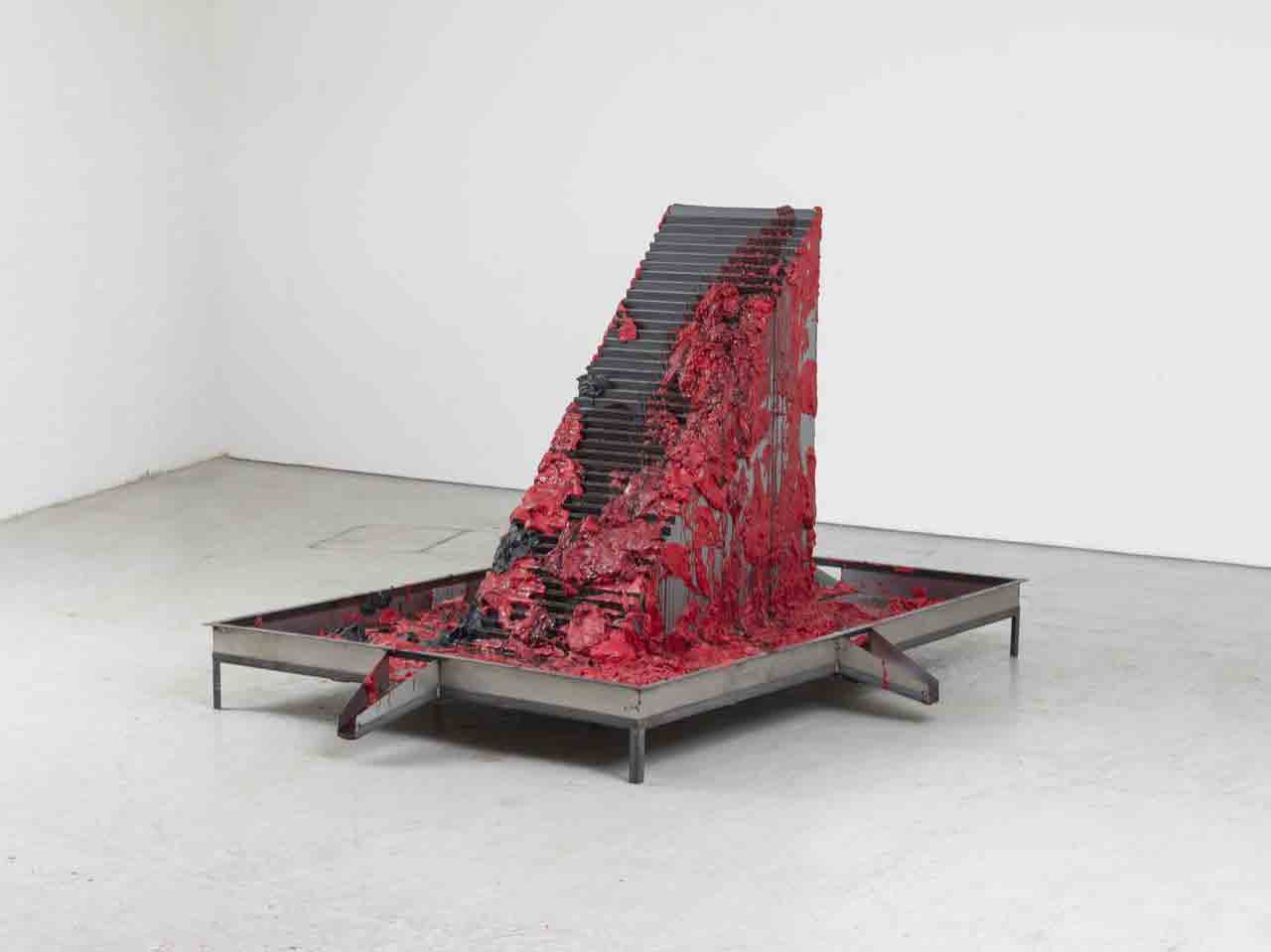 TDH: It’s like the big metal sculpture, Sacrifice (2019), when you first walk in. When Anish poses the question, what is abstract today, it makes me think about how real do we want our art? That piece is so real we can hardly look at it – yet it is in abstract form. For me, it’s the perceptions it provokes of our own mortality we can’t face. That we could be, will be eventually, reduced to a tray of materials.
EG: Standing back and looking at Anish’s work, and watching how the Tray series came about (Sacrifice being part of that), it was very much exploring a form. The work itself sits architecturally and spiritually across many cultures and references, and across Anish’s own work.

TDH: He is an artist working outside the traditional boundaries of genres.
EG: There’s figuration; there’s imagery; there is an urgency to them. But the paintings don’t sit within any one trend or any one style. And I’ve been thinking of that in the context of this moment. The next step, now that the paintings are out there in the world, is to see the relationship that they have to painting today.

TDH: What does it mean for an artist like Kapoor to take risks?
EG: I think when an artist has a genuine practice where they are really in the work, and the work is really in them, meaning where there is a strong sincerity and dedication, the first risk is making it public. That you could even dare to expose your sub-conscious at that level – to me that is an incredible act of generosity and risk on the part of the artist.

TDH: I suppose no matter how established you are or where you are in your career, it always plays on you, putting it out there. But he’s not diverging so much from previous work.
EG: He’s not. Anish has been making paintings throughout his career. There are some gorgeous works on canvas, in that format, from the 1980s. So this is not by any means a new medium, but over the past few years the work has turned more intensely to the paintings. And the paintings have been expressing a confluence of ideas and forms, very genuinely and authentically, and with increasing authority. Putting them out into the world now allows this experiment to continue and grow. 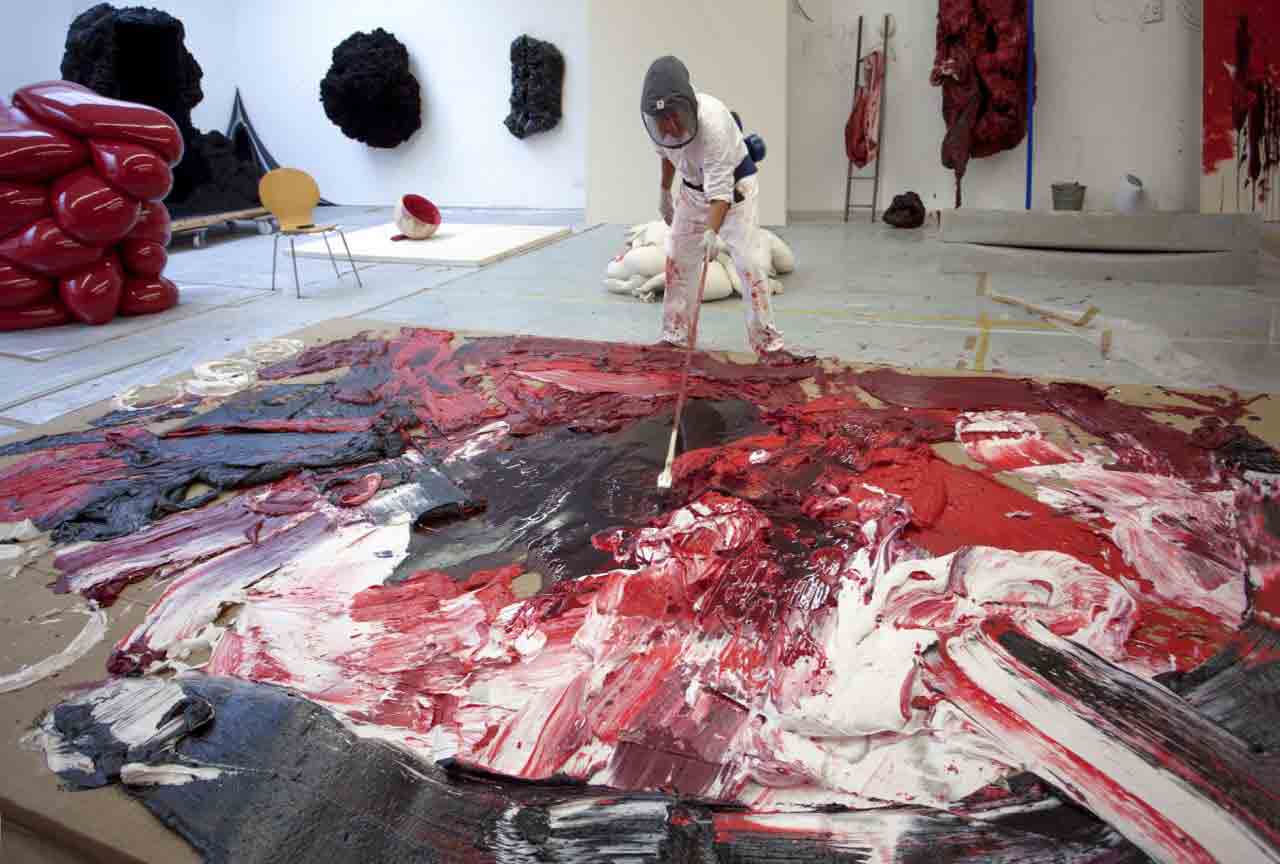 TDH: Anish spoke about what we expect, or can expect, from art today. What are your thoughts.
EG: It’s interesting, especially for an artist like Anish, who is a public figure with views that are heard – about what’s going on in the world, in this country, in India. He’s a politically conscious, intelligent human in the world and he’s an artist. He does endeavour to keep a separation between the human content in the artwork, that human endeavour, and the socially conscious human life that he lives. What is interesting is how, through his work, he makes visible a human process. You go, you try, you endeavour, you explore, you pull up, you throw the guts in the middle of the room. You have a perfected exterior of a sublime and then you also have a darkened deeper self.

TDH: And in this darkened deeper space, with a piece like Sacrifice, there is this idea of mind matter space. Is it futile? Is it real? Are we able to contain any of it?
EG: Absolutely. The idea of a container feels so ridiculous when you start to talk about it, doesn’t it? You see it with the early pigment works that feel volumetrically bigger than they are, where Anish really plays with scale. If you think of the The Bean in Chicago, how the entire city is moved around with this one object, that feels very of this earth and physical. But here it’s the idea that if you unpacked everything that’s inside of me, there’d be more of me, inside me, than my body’s volume. And again, that’s very physical, but the analogy works. We are more than the what the container suggests. And our relationship to these works starts to trigger a little bit of unease. At this point I think we know we have to be a little bit uncomfortable to push past our ‘container’.

TDH: Like the idea of containing our thoughts, is that even realistically possible? But that’s what he’s good at: showing us the gaps or making us question what we think we know.
EG: And he dares often; he dares to ask and then to act on those questions. So I think what you are seeing a lot of the time is the bravery to question the model and explore it out, keep it going, keep pushing it further.

TDH: Do you have a favourite piece or series from this show?
EG: If I had to identify a single work as a favourite (and this does feel difficult to do given that I respond to the layers of meaning and emotion in each canvas and sculpture), I would have to say the dark triptych in the main gallery, Blackness From Her Womb (2021). It's a work that you need to stand in front of to get the full effect. There is churning and smouldering which is both depicted and felt. And the intensity of the brushwork, active and perhaps agitated, reveals this dissolving, abstracted female image; it's quite powerful. The overall scale of the piece - over 8 feet high and 18 feet long – also gives it that consuming power you experience with great Abstract Expressionist paintings. There is a quote from Anish that goes something like: There is nothing so black as the black within. Standing in front of this painting, like with Kapoor's voids and mirrors, you feel this as truth - psychologically and physically. 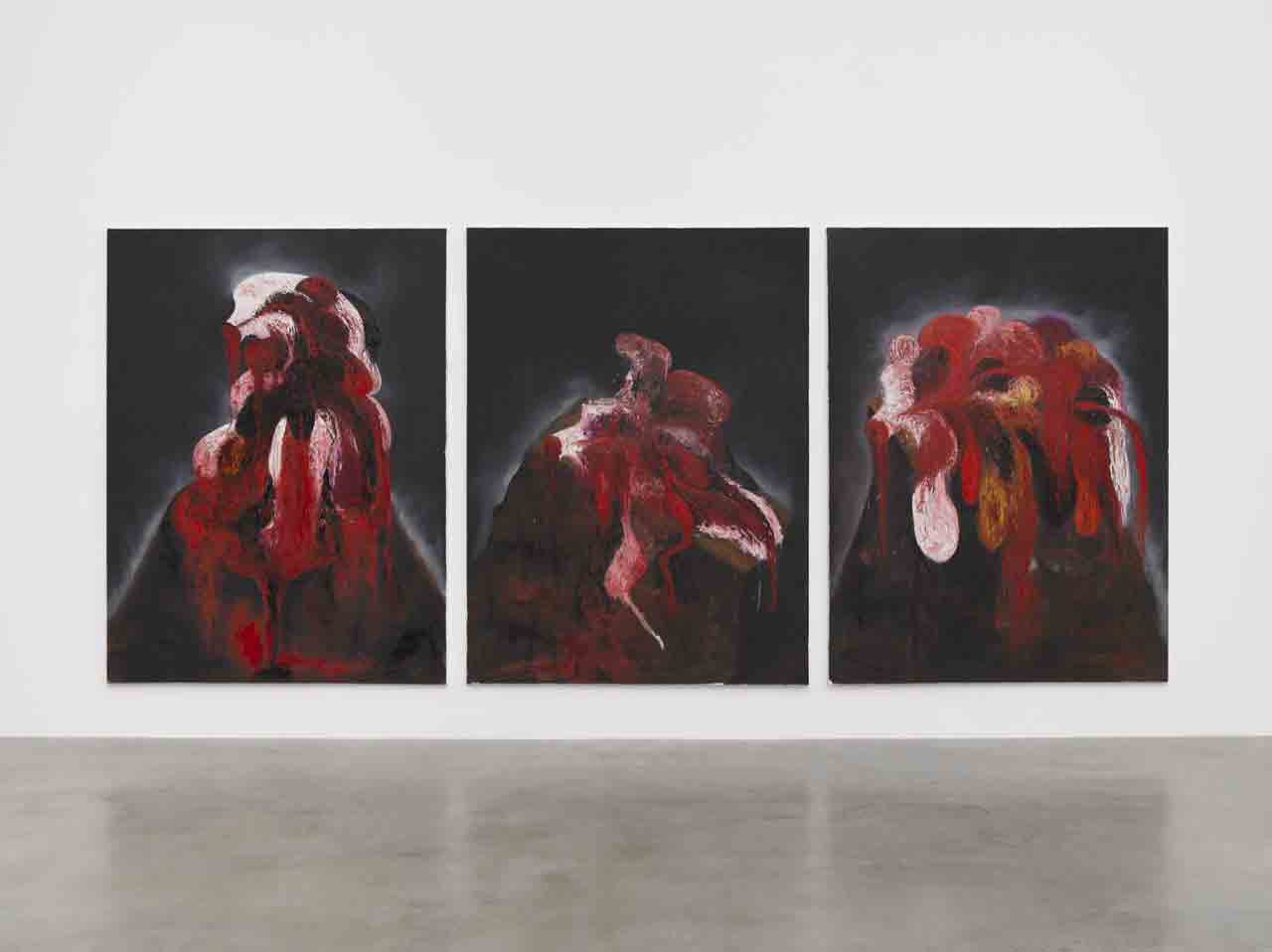 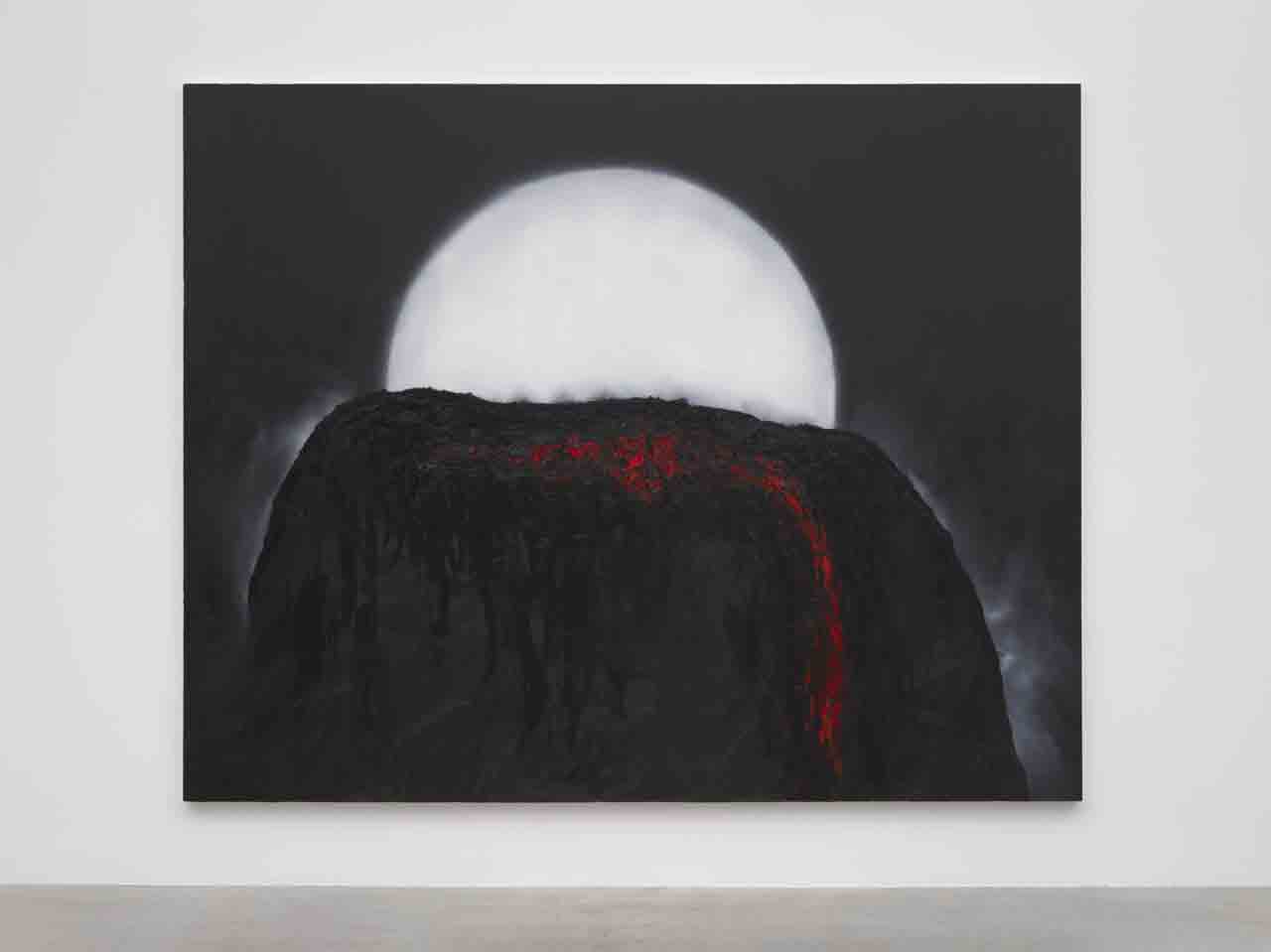