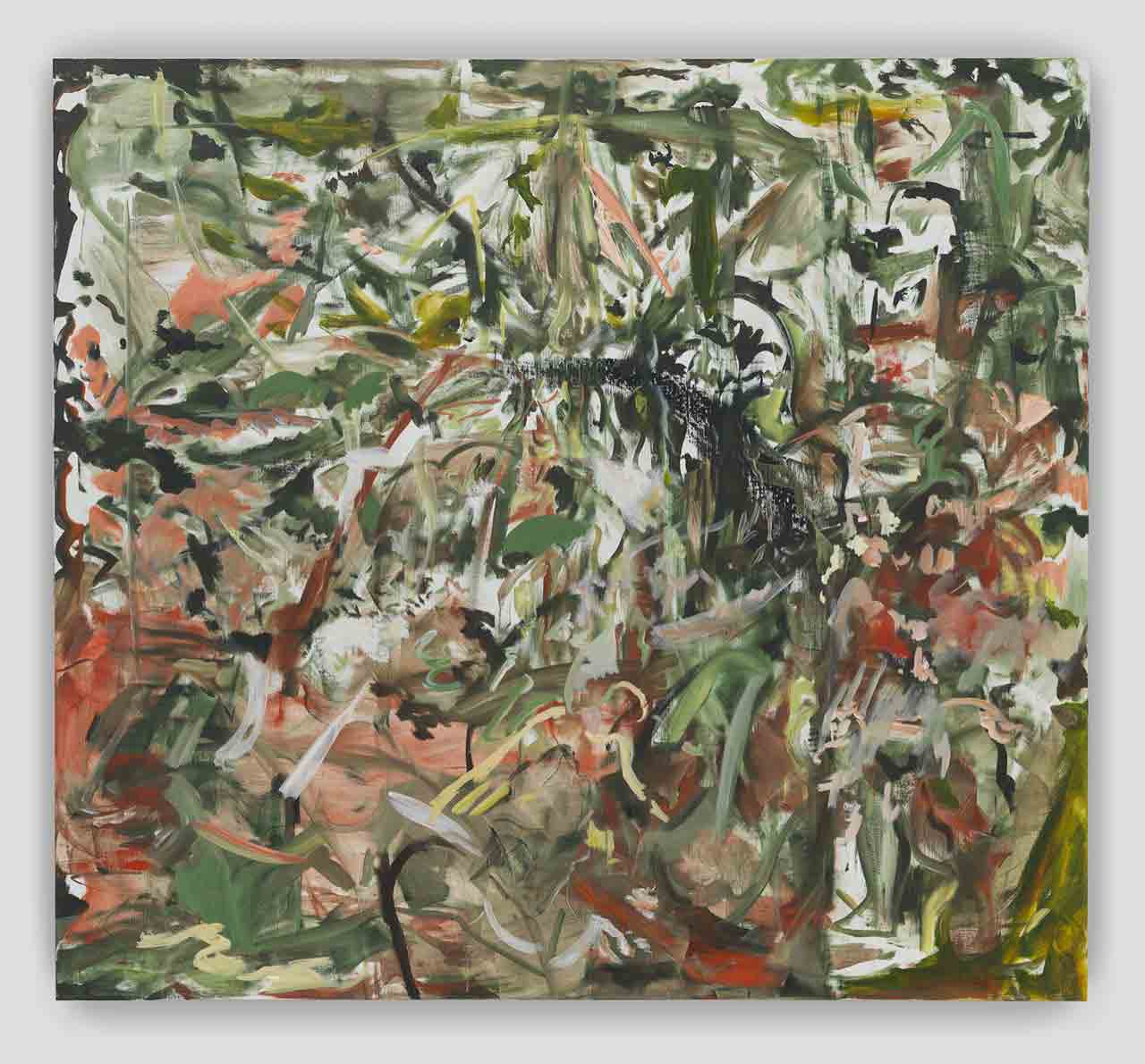 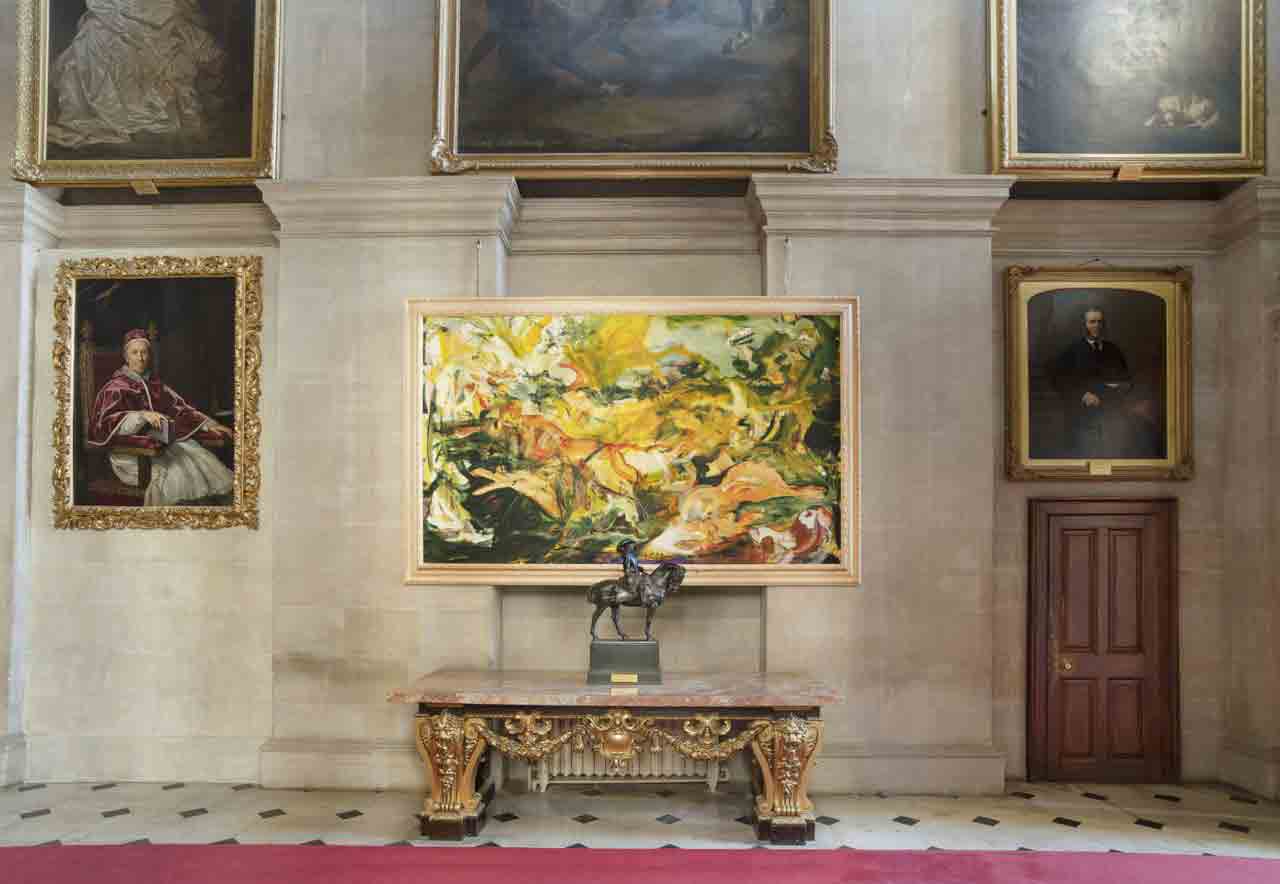 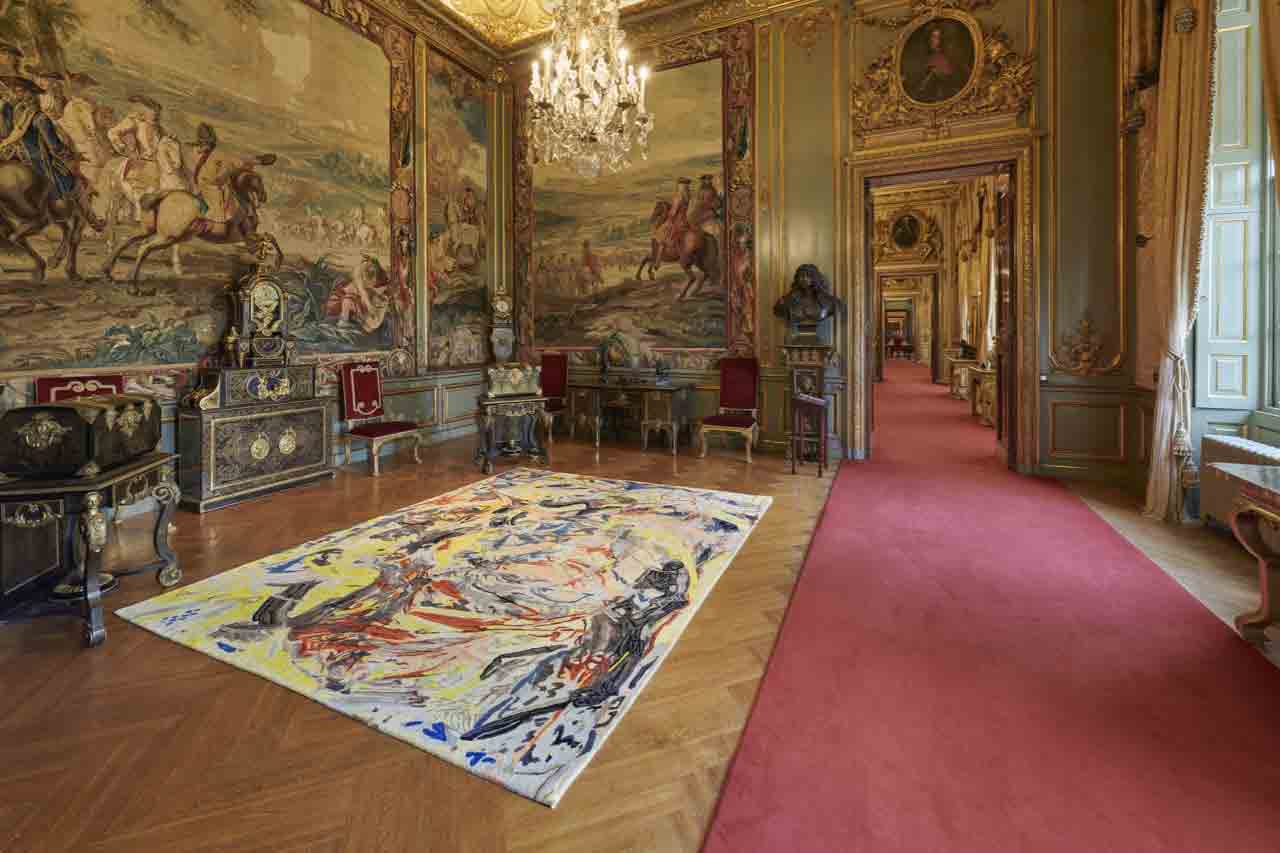 Brown was born in London and grew up in Surrey. After graduating from London’s Slade School of Fine Art in 1994 she moved to New York where she has been living and painting ever since. Brown is known for her large-scale sensual paintings where, with distinctive gestural style, she moves between figuration and abstraction. Much has been said about the resurgence of painting as a medium and Brown certainly qualifies as a central figure. Her work is highly valued among critics and collectors alike. She has also been painting her entire career, beginning at a time when it was seen as the least appealing medium. At art school in the 1990s she did question whether or not it had anything left to say but found it to be the only medium in which she could think.

The use of Blenheim Palace to display contemporary art is a more natural fit than one might think. The palace itself has been an object of ‘popular tourism’ since it was a building site in the early-18th century, with a selection of guidebooks printed by the mid-18th century. More importantly, it has also been home to a succession of art-and-culture loving Dukes and Duchesses. Traditions and institutions endure when they continue to evolve and this is very much how Blenheim Palace sits today. Blenheim Art Foundation, established in 2014 by Lord Edward Spencer-Churchill, follows neatly in this tradition.

We were recently able to put some questions to Michael Frahm, Director of Blenheim Art Foundation, about the exhibition and the Foundation itself.

Trisha D’Hoker: What drew you to Brown as an artist for this project?
Michael Frahm: I have been a long-time admirer of Cecily’s work and was blown away by her retrospective exhibition at the Louisiana Museum in 2018. This is the seventh show that Blenheim Art Foundation has organised, yet it is our first devoted to contemporary painting. It felt like the right time to invite a painter to respond to the great tradition of painting at Blenheim. And to me, Cecily is one of the finest painters working today, without a shadow of a doubt. 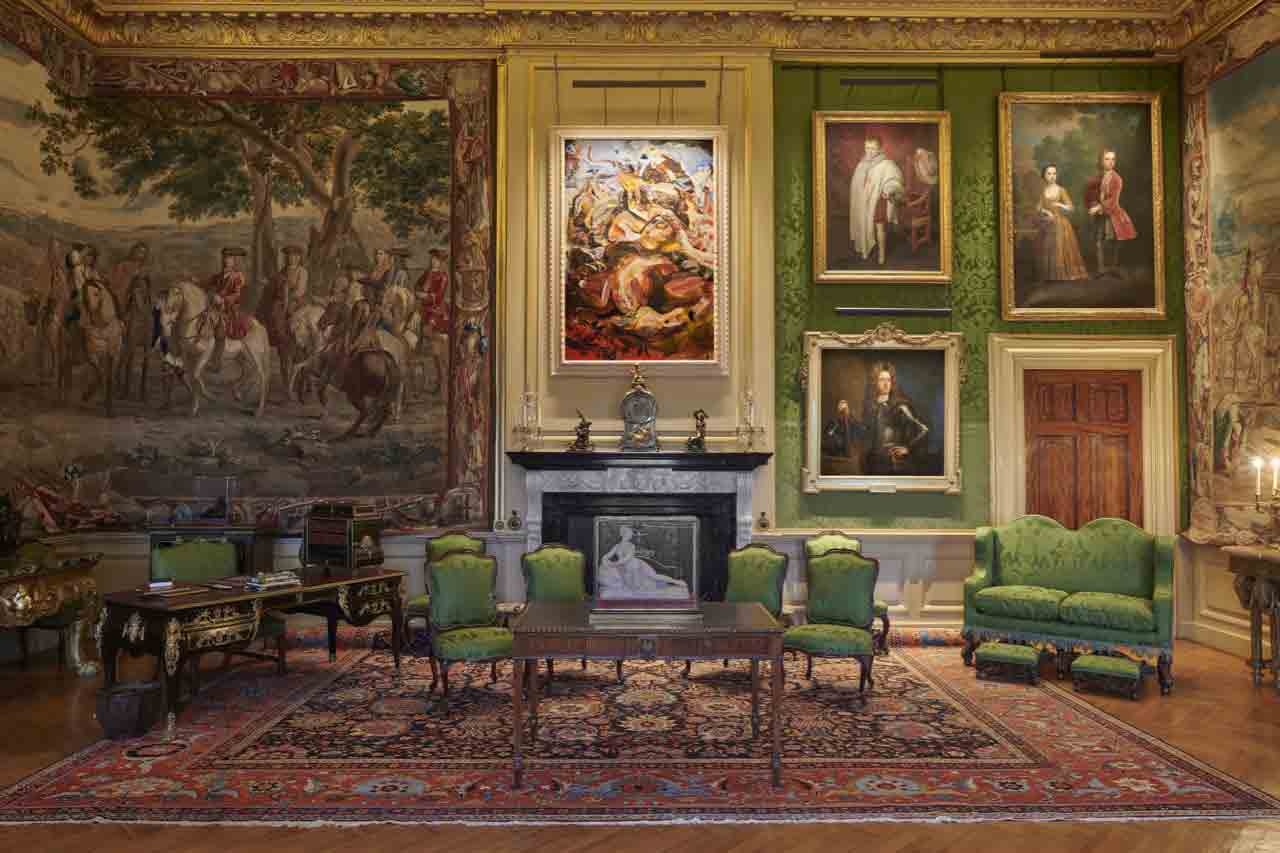 TDH: Has she done anything like this before?
MF: Cecily’s commission for the Metropolitan Opera in New York marked the first time she produced work site-specifically. To work in such a way, as she did for Blenheim Palace, is therefore quite new for her. I think she was excited by the challenge and opportunity to create a whole body of work for a very specific context.

TDH: Can you tell me about your relationship to art and the art in the palace in particular?
MF: I come from a family of art collectors, so art has always been around me and played an important role in my life. As for the Palace, it is an honour to be able to work in this UNESCO World Heritage Site which is so full of history and incredible artefacts. I have visited Blenheim countless times, yet I discover something new every time I am there.

TDH: How did the Foundation come about?
MF: The Art Foundation was started by Lord Edward Spencer-Churchill who grew up at Blenheim Palace. Edward is passionate about contemporary art and wanted to find a way to integrate it into the fabric of Blenheim, introducing new audiences to the work of today’s great artists while also offering an alternative to the traditional white cube format associated with contemporary art exhibitions. The programme launched in 2014 with an exhibition by Ai Weiwei and has continued with an annual exhibition since then.

TDH: What are some of your favourite paintings in the exhibition?
I think the uniqueness of this project lies in the fact that each work speaks to the next, so the overall exhibition comes together as a single artwork which tells a strong and cohesive story about Britain past and present. I could go on for a long time about all the individual pieces that I find outstanding but to single out a couple, I would have to mention Dog Is Life, (2019), for its visceral depiction of a hunt scene with a fallen dog in the foreground and, of course, The Triumph of Death (2019), Cecily’s largest work to-date, which is a masterpiece. It is so rich in detail, both humorous and harrowing, and speaks very truthfully to the world we live in today. It has been compared to a modern-day version of Picasso’s Guernica and I agree that these works share a certain brutal, epic spirit.

Brown’s work, for the most part, is subtly placed amongst existing Palace pieces, allowing past and present to reflect back on each other. In this way the art of the past itself becomes more animated, more relevant again. As if their display cases have been opened and they are allowed to breathe. 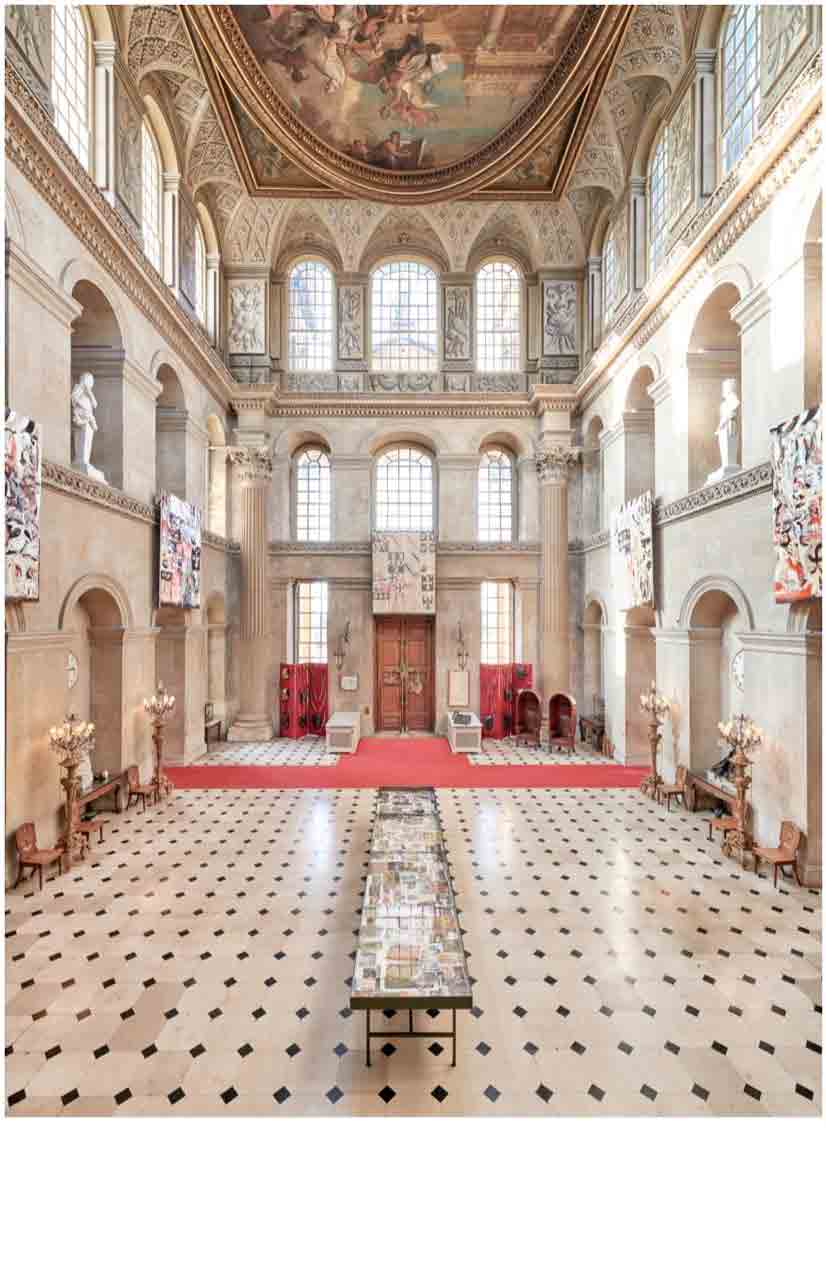 The exhibition begins with a long table-like vitrine running the length of the Great Hall. A montage of the images that provided inspiration, it is a beautiful object in itself, while offering a fascinating insight into the artist’s creative process. Baroque hunting scenes, Victorian fairy paintings and Palace spaniels rub up against cartoon ducks, the Beatles’ Yellow Submarine and battle scenes from Barry Lyndon – elements of Brown’s own remembered 1970s England. These photographs and slips of paper are what surrounded her as she worked. Spread out across the floor, they became her peripheral vision, a fluid stream of colour and form. Brown says the vitrine provides a way to read the exhibition.

There are fleeting glimpses of Brown’s work through arches and down corridors; high ceilings and carefully curated objects add gravitas; and the labyrinth of rooms provide dramatic approaches and vistas for viewing.

Blenheim Palace is unique in being the only private house in England to be legally called a palace when in fact it is not a royal residence, nor has it ever been. A gift from Queen Anne to John Churchill, 1st Duke of Marlborough, in honour of a major victory at the Battle of Blenheim in 1704, it was built as a testament of England’s supremacy over the French. In this way Blenheim was always more than a private house, constructed with all the glorified ornamentation, symbolism and drama of the English Baroque. Continually inhabited now for over three centuries, Blenheim has been home to twelve generations of Dukes and Duchesses, and continues to be a focal point in the nation’s history and identity – not least for being the birthplace and ancestral home of Sir Winston Churchill. In 1987 it was designated a World Heritage Site.

A 21st century perspective includes an awareness that a selective history is shown (and taught) and Brown incorporates this into her work by means of changing perspectives and blurring boundaries. One of the first things Brown noticed was the proliferation, as would be expected, of martial imagery throughout Blenheim, which prompted the first two pieces she painted, They’ll always be an England and Battles were meant to be painted. For these Brown did not start with any particular image in mind but rather a loose idea of battle; a lot, she says, was driven by colour.

In an interview with Michael Frahm, Brown spoke about this aspect of her work. ‘A lot of people think I start with a figurative painting and then paint over it in an abstract way, but more often I’m trying to hold on to a subject that disappears on me as I paint. The works are teeming with imagery – if you give them time, you see lots of little heads and horses and bits of animals, even if at first glance they seem quite abstract.’

The hunt scenes, another popular Blenheim and typical English country house theme, were also driven by similar colour and movement. Brown described these works as like an ‘abomination at high speed – as if you’re watching something from the window of a train, say. It’s a beautiful day, a bucolic landscape, then suddenly you glimpse something horrific out of the corner of your eye, though too fleetingly to see properly.’ 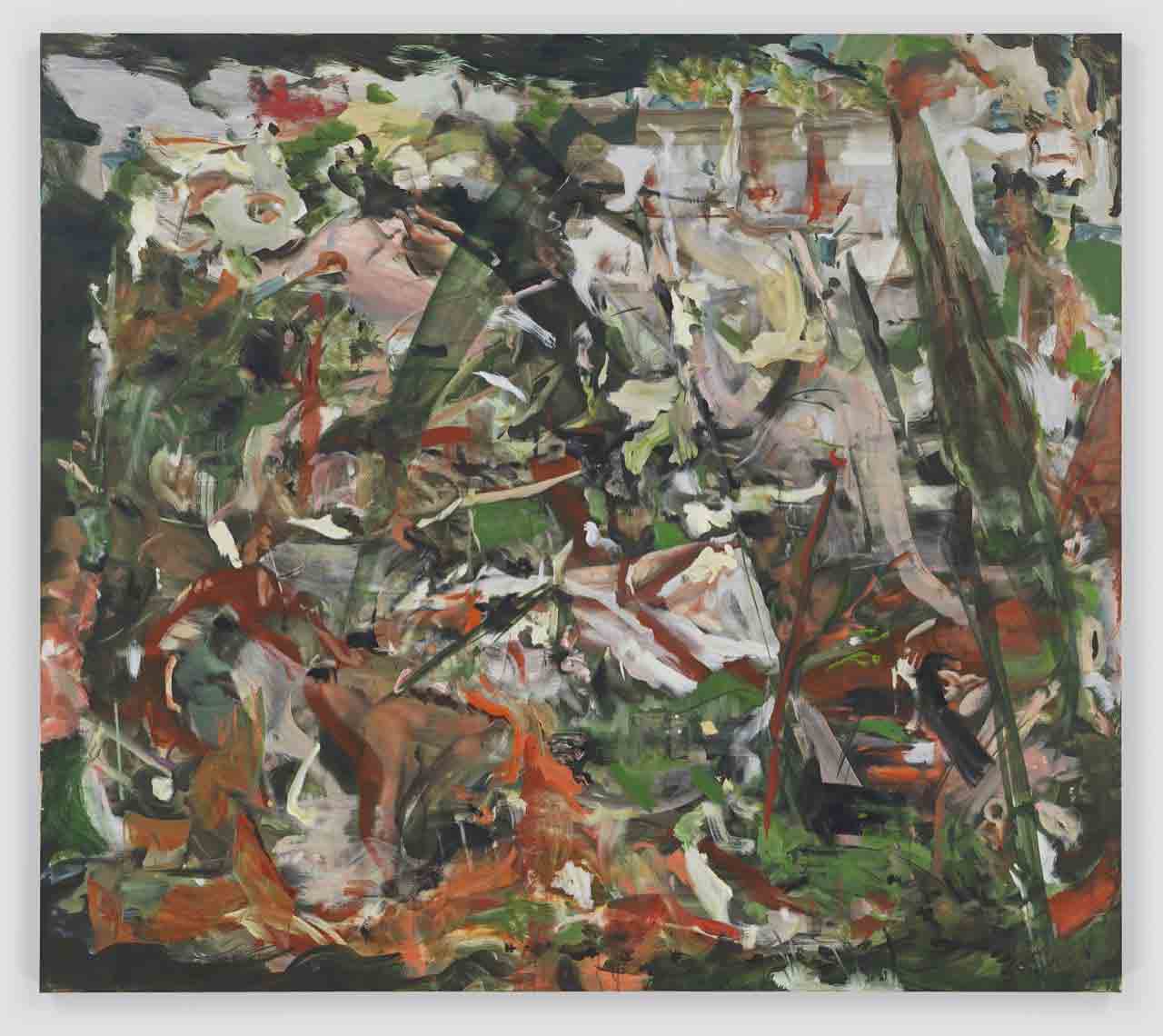 Set in two thousand acres of parkland, including a hundred acres designed by Capability Brown in 1764, Blenheim Palace and surrounding grounds have belonged to the crown (and technically still do) since at least the time of Henry I, at which time they were enclosed for a deer park. Naturally, a lot of the Palace’s artwork involves nature and there is much in evidence in Brown’s work here.

It is a natural fit; nature has long been a theme for Brown. As has, increasingly of late, this idea of idyllic English gardens and countryside. When the opportunity came to work at Blenheim Brown had already begun to rethink her relationship to England, her childhood memories and what it meant to her to be British after living abroad for twenty-five years.

Brown paints everything herself, without the use of assistants, but there is one piece in the show that did require outside fabricators. Enchanted with the Palace tapestries, Brown was encouraged to turn one of her paintings into a rug. It is one of the most abstract pieces, based on the Armorial paintings, whose static two-dimensional properties had already proved a big departure for Brown. It would prove a good fit for a rug.

The exhibition finishes in the Long Library with Brown’s largest and most ambitious work to date, The Triumph of Death. One of the more figurative paintings, she drew in charcoal on the canvas first, something she doesn’t usually do. The subject, however, was not unusual for her and the idea of creating an apocalyptic vision of a fragmented, disjointed society using satire and allegory felt fitting for the times. Working on such a large scale meant Brown constructed the work in a similar fragmented manner: working on one section at a time, never being able to see the whole. And after all the battles and hunts it felt an appropriate way to round off the exhibition. Taking Inspiration from an anonymous15th century fresco in Palermo, Sicily, Brown peoples the final piece with her own characters and perspectives, placing it firmly in the present. 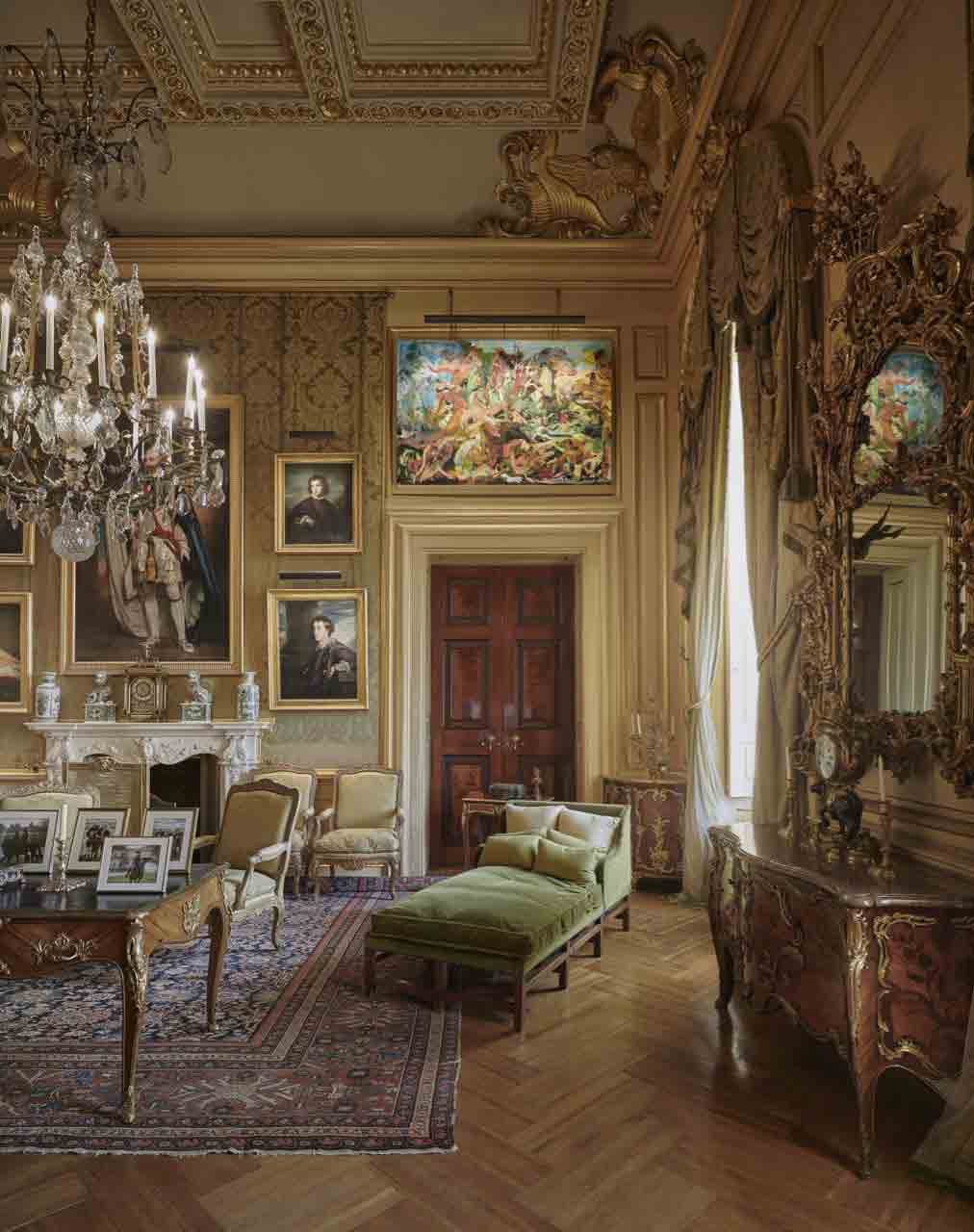