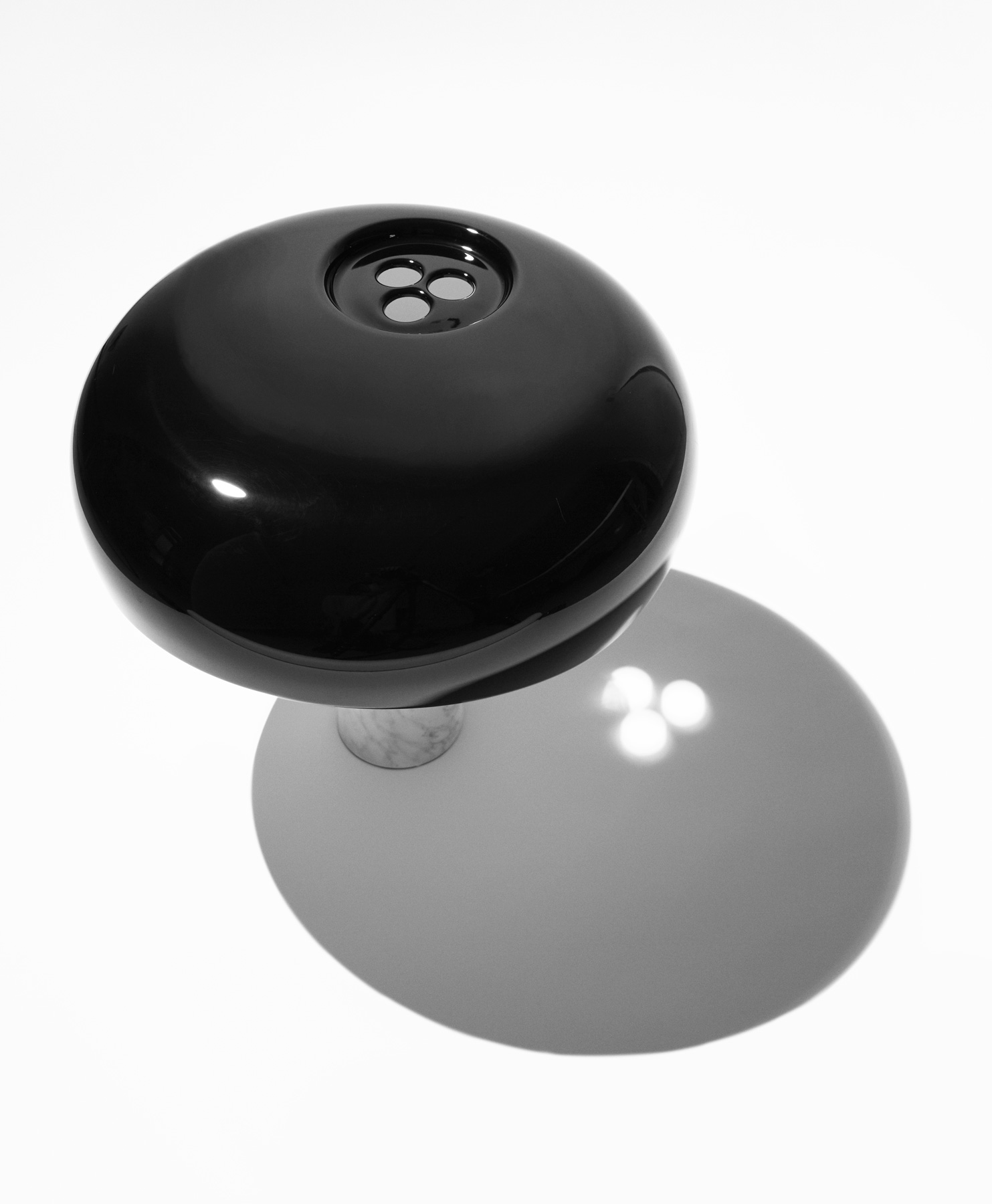 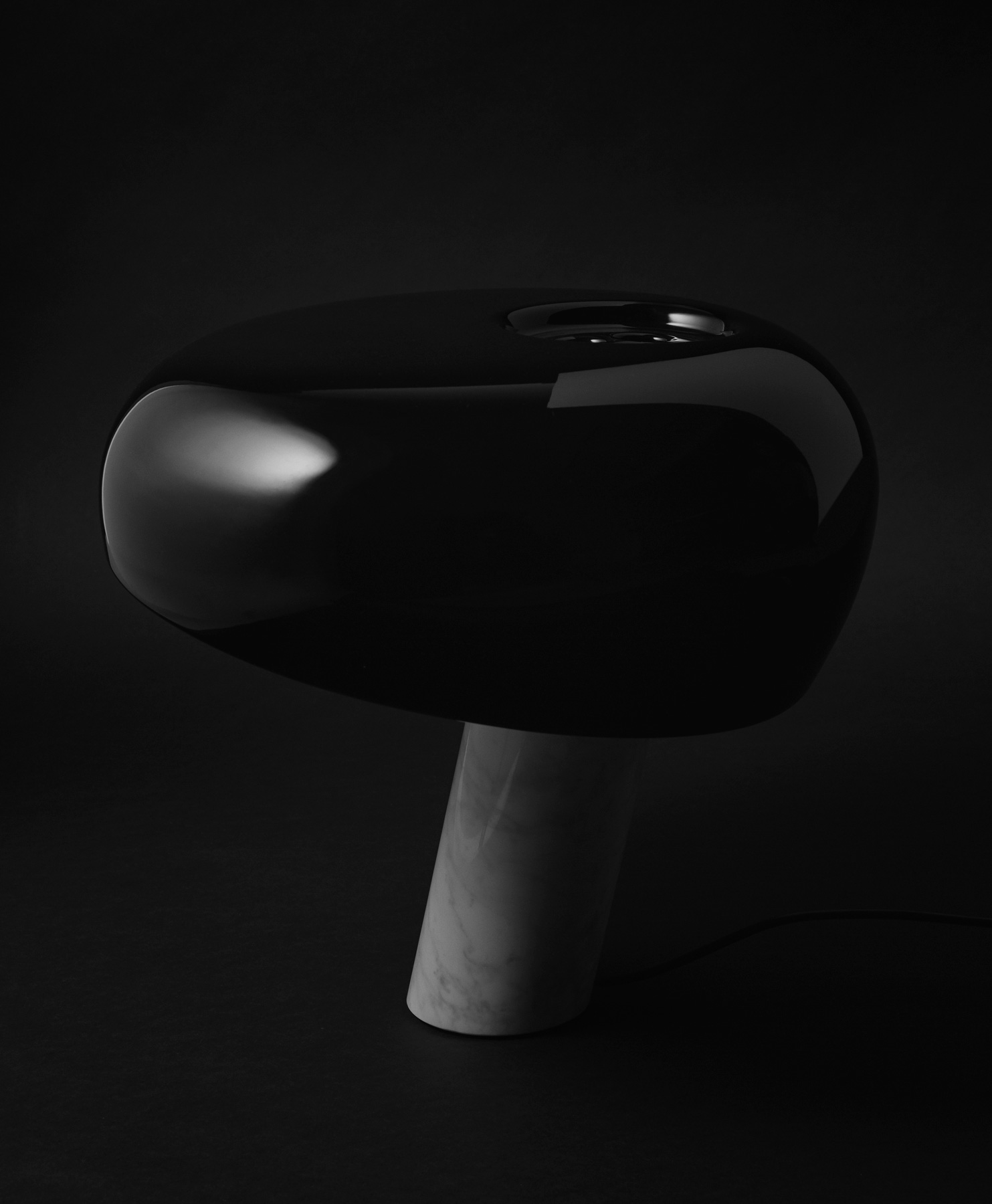 The Castiglioni brothers both trained as architects and worked together on a breadth of design projects until Pier Giacomo died in 1968. They played a vital role in the development of the manufacturing sector during the period known as the ‘Italian Economic Miracle’. Looking back at their working practice, it's easy to understand why their exceptionally flexible approach to design was a good fit for a sector looking to create low-tech objects of high aesthetic appeal. The Castiglionis' methodology of design can be loosely grouped into three approaches.

The first concerns the designing of original objects using up-to-date manufacturing methods. The brothers created over 150 such objects in their collective careers. A good example, and also reputedly Achille’s favourite design, is their functionally perfect in-line lighting switch design for VLM in 1968, which utilised VLM's brand new factory. It's so utterly anonymous that most users of it would be unlikely to even notice its presence; which is probably why Achille enjoyed it so much. 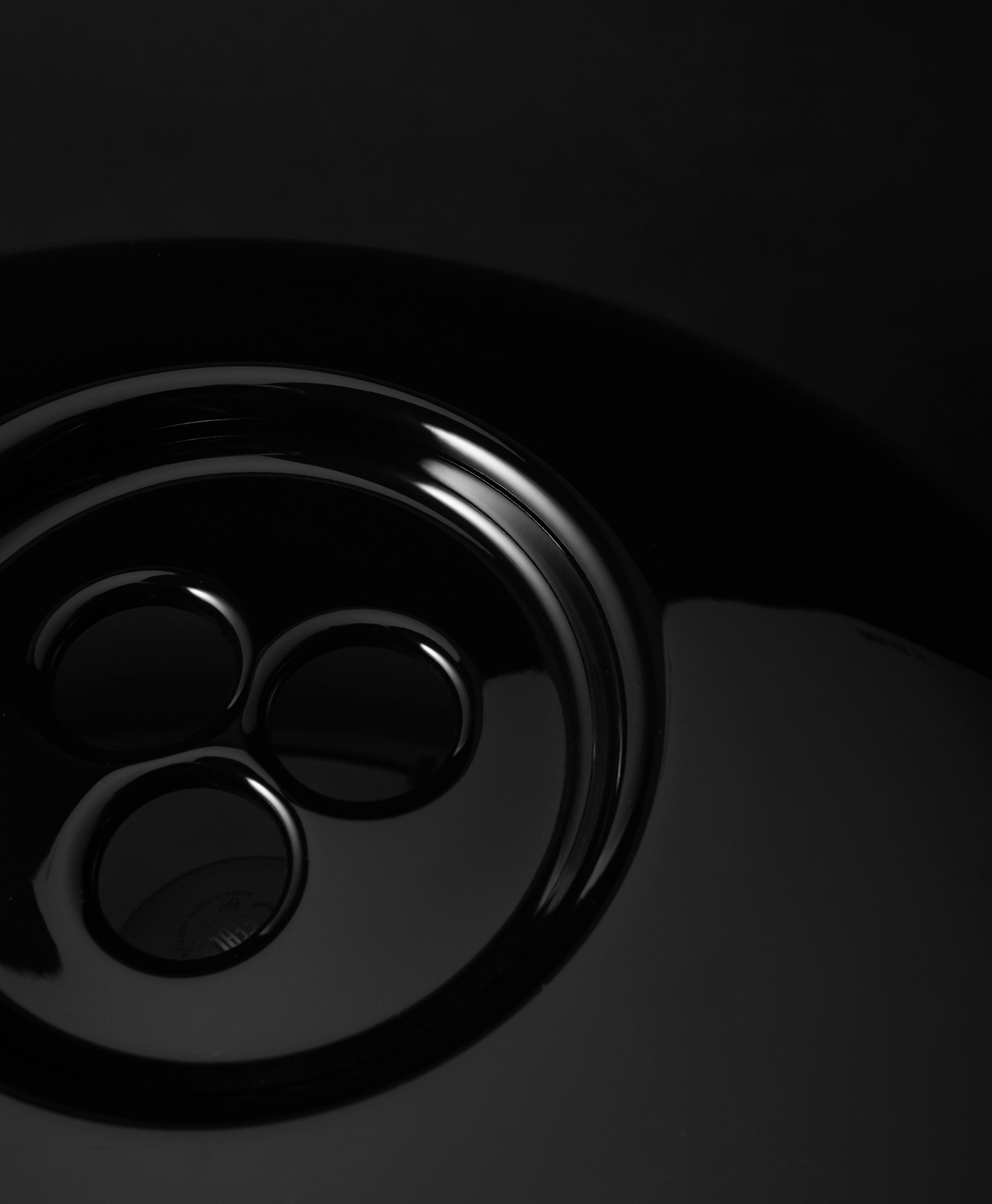 The second approach is all about the idea of updating existing designs to reflect both technological changes and the needs of modern life. This approach proved successful with designs such as the Tric chair in 1965, which essentially took an out of production Thonet chair from 1928 and reworked it with slightly different dimensions, materials and new upholstered sections. This humble approach and willingness to develop older products for modern needs, tells of designers totally at ease with their own place in the ecosystem of things. It also acknowledges the idea of a continuum in design.

The third approach is that of the ‘ready-made’ object, taking inspiration from Dadaism. This was an idea that the Castiglionis' explored with a range of designs in the 1950s and 1960s and which included such notable successes as the Toio lamp, the Mezzadro stool and the Allunaggio public seating. Essentially the brothers looked at how they could incorporate mass-produced components and materials into new designs. Their use of the tractor seat in both the Mezzadro and Allunaggio seats was both iconic and culturally resonant. It was also excellent for industry. 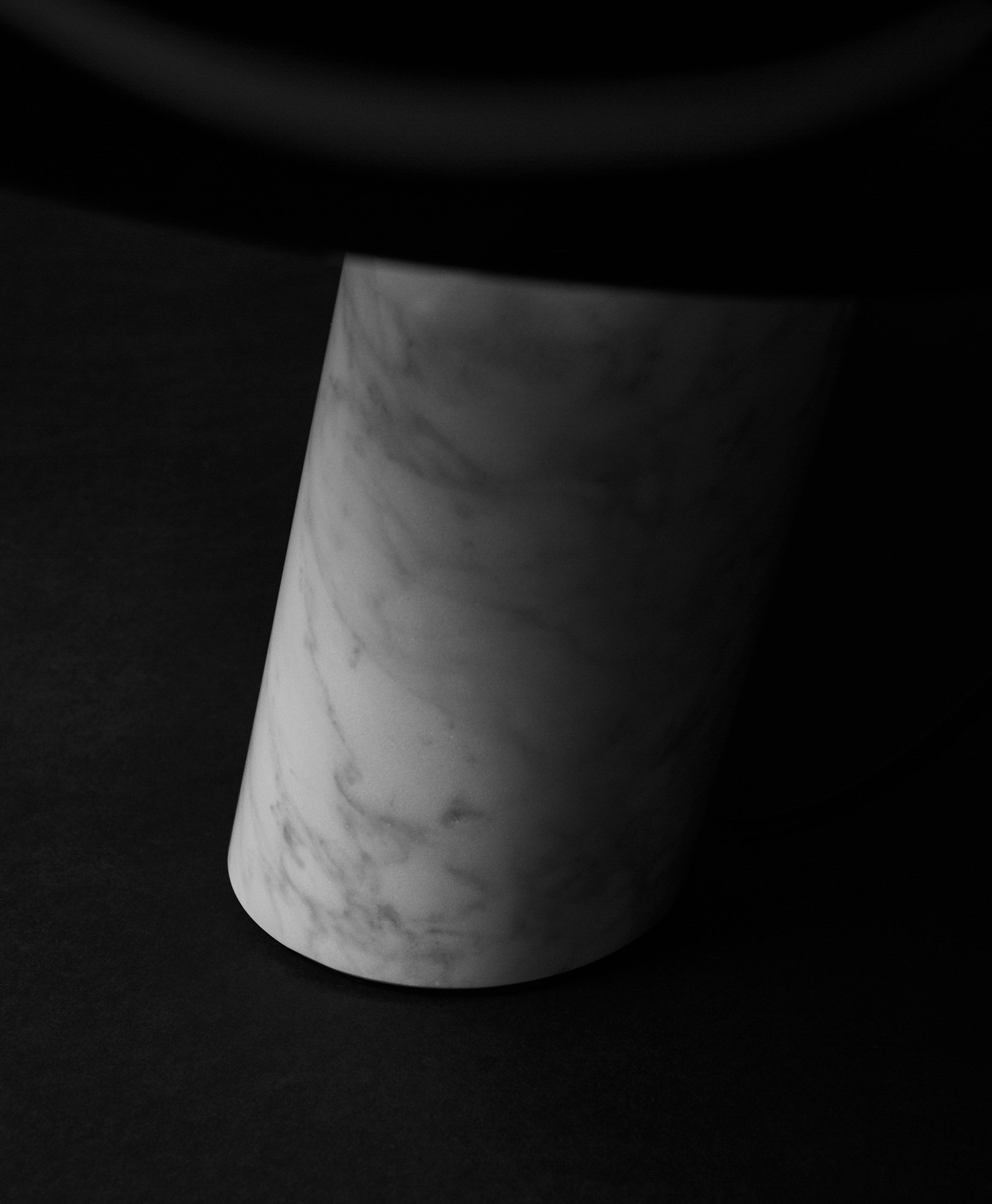 So where does the Snoopy lamp fit into the pantheon of great Castiglioni designs? What's interesting about Snoopy is that it reveals something else about their approach that is less widely acknowledged or written about. It shows their understanding of symbolism in human culture; a kind of visual metaphor for the future. It was designed in 1967, when the Peanuts cartoon strip by Charles M. Schulz was a cultural phenomenon, even in Italy. It is often heralded as a design that shows off their well-known sense of humour, this beautiful light that looks very much like the dog Snoopy from Peanuts. However, beyond that explicit link to the cartoon, the design itself manages to blend all of their different approaches to create something that is at once original, familiar and with deep resonances of the past. The original model had an advanced dimming system housed in the base, which was an innovative feature at the time. It also had three cooling holes in the painted aluminium reflector that doubled as grip to move it, just like the grip of a bowling ball. Lastly, the base of the light uses the finest in Italian Carrara marble, a nod to both structural rigidity and the whole history of Italian design. 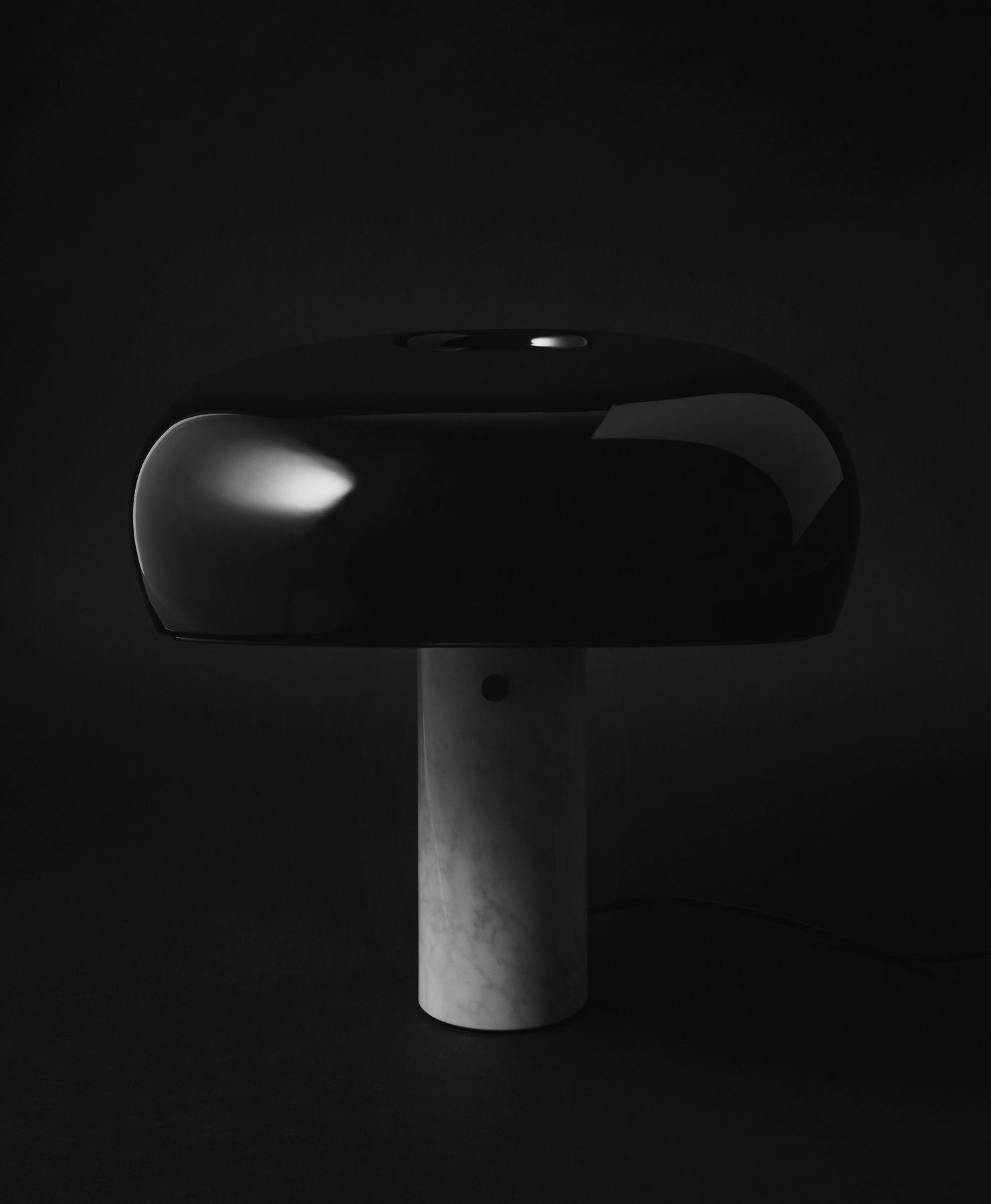