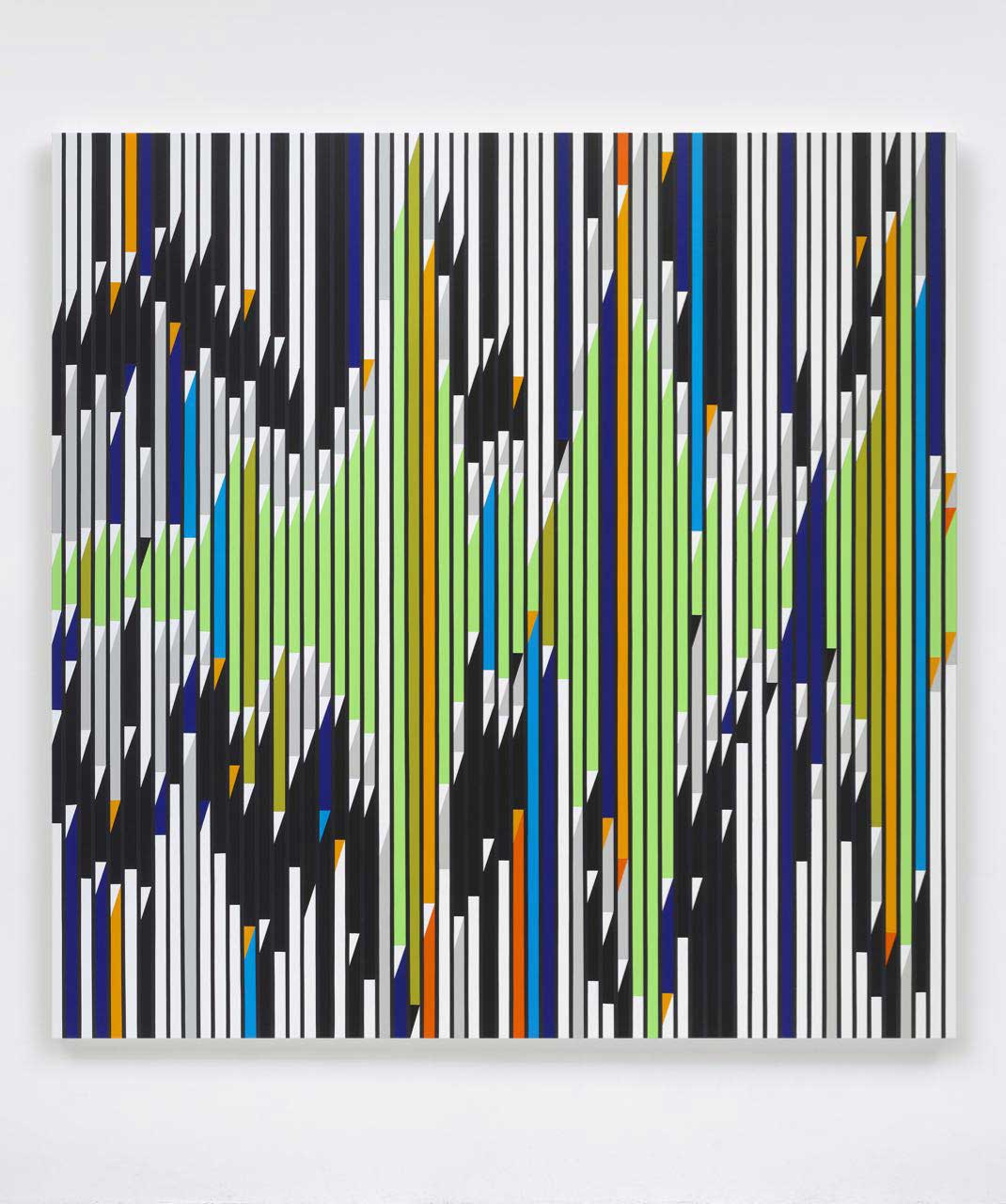 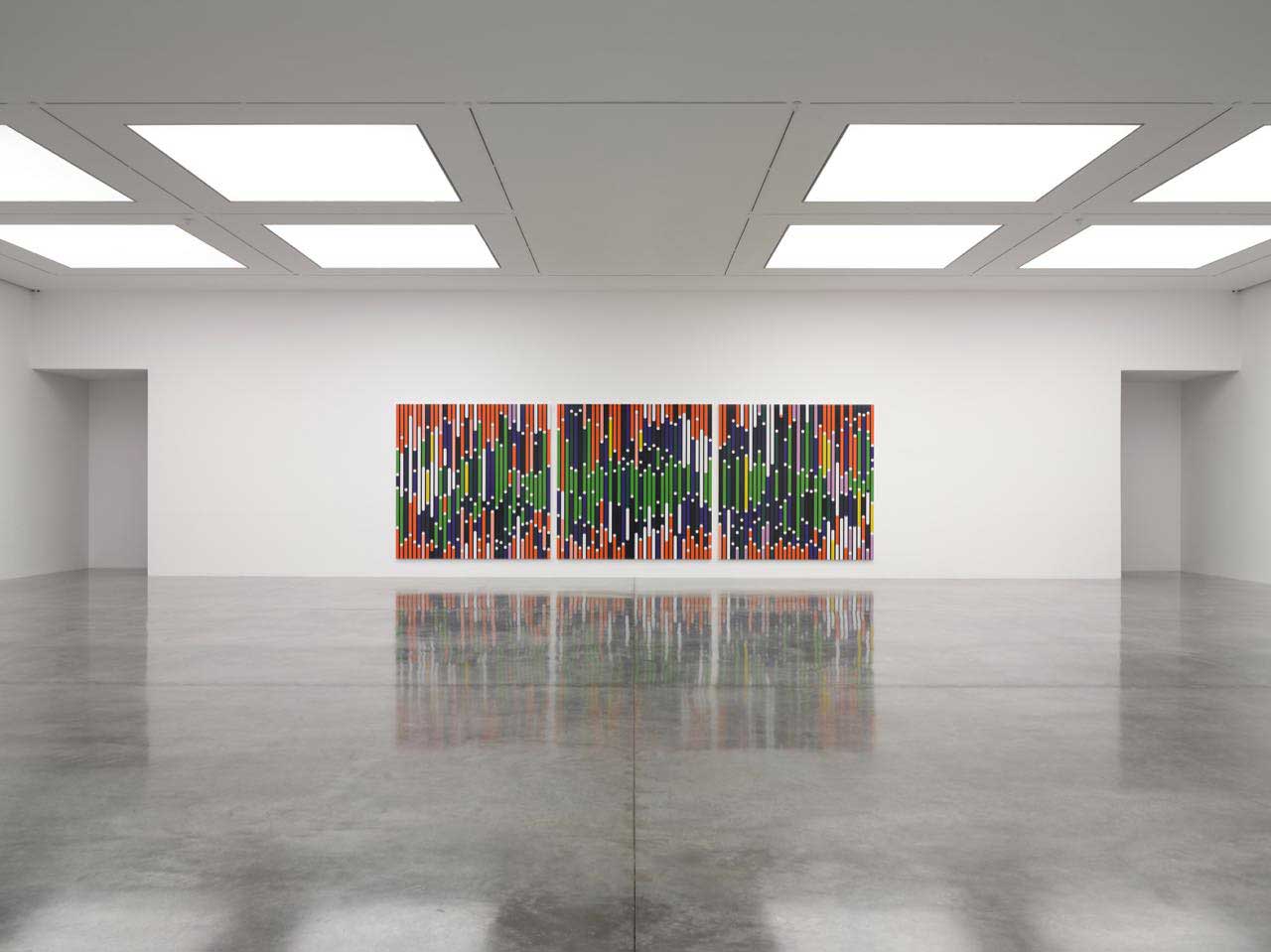 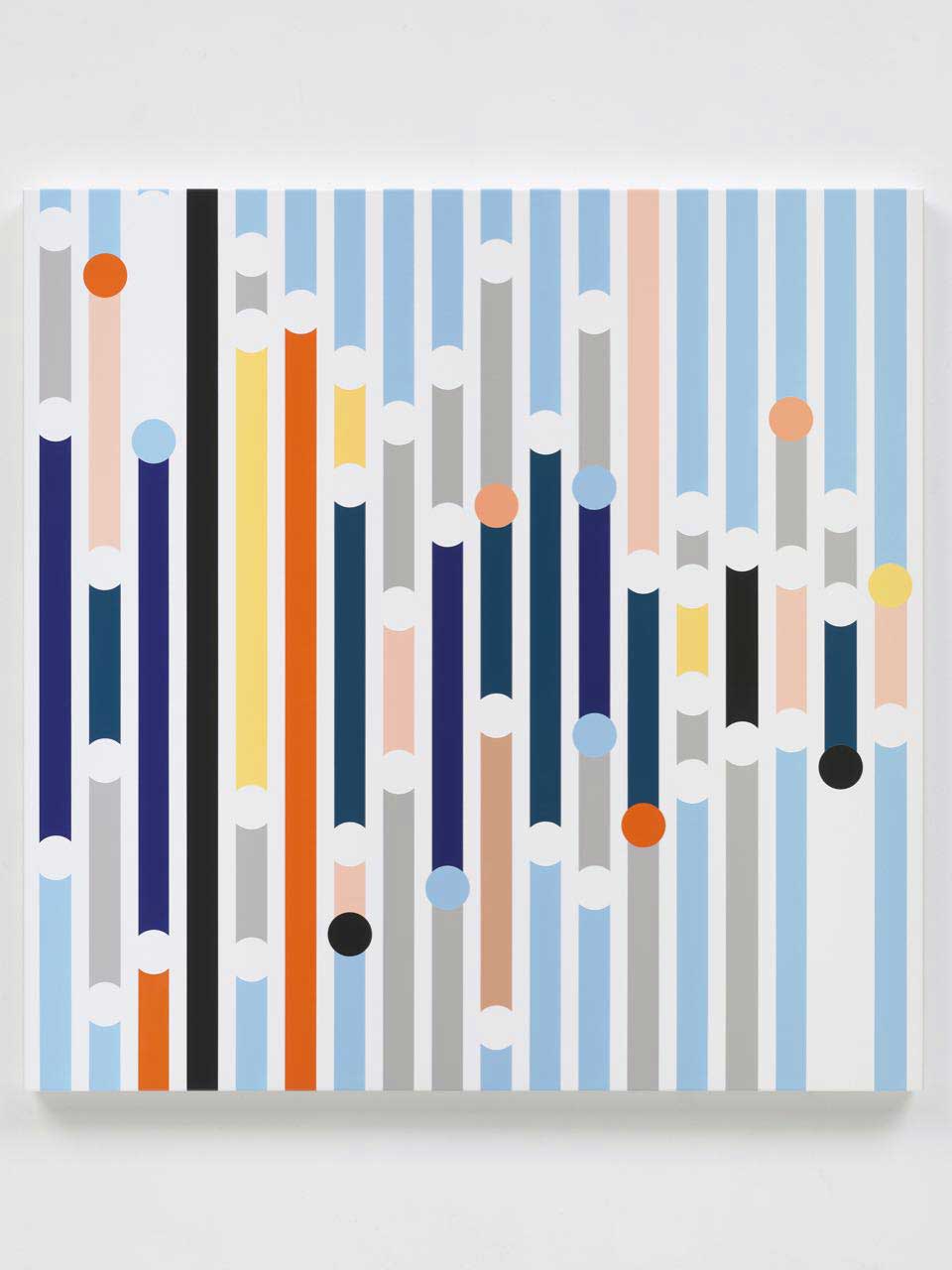 Morris was born in the UK but has spent most of her life and career in the United States, primarily Manhattan. Machines do not make us into Machines, now on at White Cube Bermondsey, is her first solo exhibition here since 2013. It features two Morris films, Abu Dhabi and Finite and Infinite Games, as well as a large-scale glass sculpture, Sound Graph paintings based on speech from audio recordings as a starting point for their compositions and a large site-specific wall painting, which was still being installed as we arrived for the press view – an unexpected treat.

Trisha D’Hoker: So, becoming an artist; how did it all begin for you?
Sarah Morris: I do have a creative background. My mother is very creative. My grandmother was a painter, and her mother was a painter. So there was this thing that to be creative was a normal pastime; a normal activity that was viewed as somehow equal to all of the science going on in my house, because there was a lot of science — as my father is a research scientist, an endocrinologist and my mother is a nurse practitioner. So, totally different things, but at the same time they were very into reading, and very into art. I knew a lot of people growing up doing very different things. I was always interested in what adults were doing, and looking at them, and thinking about what they were doing; who was leading an interesting life?
I read a lot as a kid because I sort of wanted to know where I was going to go and what I was going to do. Reading allowed me that vector of thinking, ‘Where is it I want to go?’ — both in terms of practice, and physically where in the world. I didn’t really start making art — I may have made a few pieces as an undergraduate, but I really didn’t start until I was around 22 or 23. I made a manifesto when I was at Brown University, and through that manifesto I met Jeff Koons, and Hal Foster, who runs the art history program at Princeton now. I met a lot of people, and I talked to a lot of people, and I did see myself as a provocateur and an author when I was at university. I was in a lot of other people’s films, but I didn’t make any films. I didn’t really make paintings — but everyone I knew made paintings or films or were all very creative and everyone saw themselves as an author, and that was great.
When I came over to Cambridge to study social and political theory, I met people like Gerhard Richter, I met Allen Jones, Pentagram. I went to the Saatchi space and saw the Neo Geo show. I really started to know solidly that year — I guess I was 20 or 21 — I started to conceptualise myself that year as art was where I would be heading to. When I went back to the States after Cambridge, I applied to the Independent Study Program at the Whitney Museum of American Art, which gives artists studios and allows people to curate.

TDH: But you weren’t an artist yet?
SM: But I wasn’t an artist yet. It’s actually a very difficult programme to get in. A lot of my friends have been rejected. I’ve tried to get a few people in the last few years, to help some people; it’s actually very difficult to get in. I don’t know how people get in, or how they get rejected, but a lot of artists have been through that programme: Gavin Brown, Rirkrit Tiravanija, Jenny Holzer, Julian Schnabel. An incredible group of people, so many different types of practices. Every [artist’s] pathway is completely different. But mine was through reading and conversations. 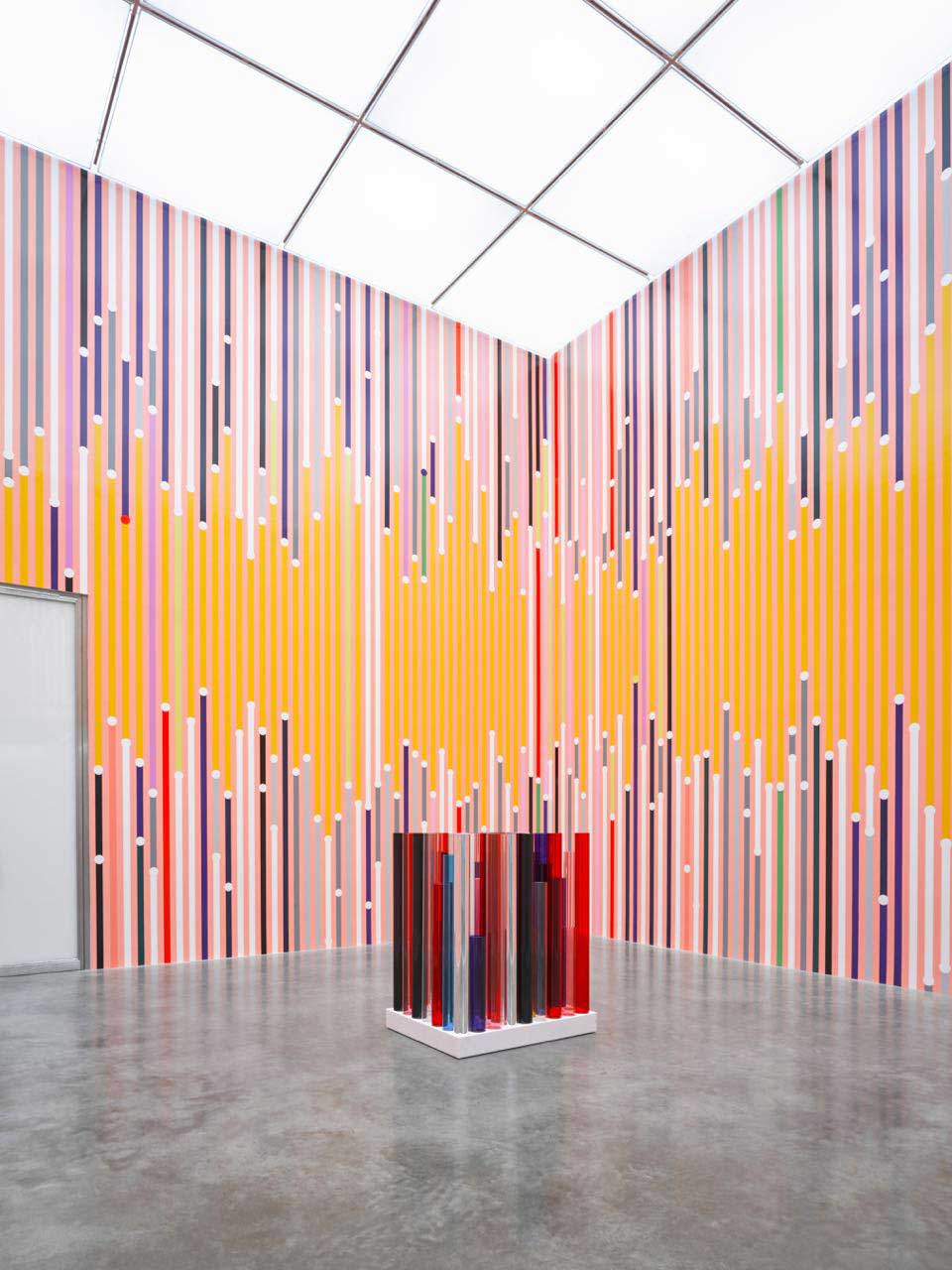 TDH: You’re kidding?!
SM: No, and I found it when I was on my way to see David Lynch’s Blue Velvet. Some friends and I were walking past this building. And I saw it, and I was very attracted to it. I felt this very strong thing that I wanted to live in this building the next year. So I knocked on the door and found out who the owner was, and I wrote her a letter. There was also a Mafia connection, but the interesting thing was that Edgar Allen Poe had lived there. He was obsessed with a woman there, in Providence. He had really wanted to marry her and was devastated when she rejected him. But he chased her for a long time; it’s a super interesting story, slightly tragic. He wrote for a long time in Providence, at the Athenaeum, this historical library there.
That was the first time I occupied someone else’s place. When I was in London, I lived in the Barbican. Then I lived in the building that Truman Capote bought with the proceeds of the success of In Cold Blood. Then I lived in Paul Rudolph’s apartment. It was beautiful, it’s like a ship. I couldn’t buy it, though. The sound in that apartment was interesting but there was too much sound in the apartment. There was no privacy. It was all marble, and it was all open. It was just one big library with a bed. I decided last year that I wanted to have a change. So I moved but I only moved half a block. I still live in the same neighbourhood, I still see all the same people and I still have a great view of the river, which I love.

TDH: And the new place is somewhere special too?
SM: Yes, but I do feel like Paul Rudolph was a bit of a guardian angel for me because something about the history of that place, ‘23 Beekman Place’, it was the perfect moment for me to go the moment I went there. It actually felt like a sanctuary. It felt as if I was very protected and I was very strong in that place. Then I outgrew it. I lived there for six years. So, I think I got the best out of it.

TDH: So how did you come to architecture within your work?
SM: My first studio was on 42nd St, between Seventh and Eighth Avenue. It was just literally the cheapest place where I could find a studio. I really loved this idea of being right in the centre, not on the margins. I think that applies to the subject matter of my work too.
I go right into Hollywood, I go right into Beijing, to the epicentre, going into this spot where you are engulfed: you’re part of a larger system, and there is no inside and there is no outside. It’s just the network that exists, the infrastructure that exists. I love all of those aspects.
Of course, there are elements to that that are repulsive: you don’t necessarily always want to be subsumed into something else. But frankly, that is where we are right now in our society. I know a lot of art and a lot of art history fetishises this concept of being on the perimeter or being on the outside. But the truth is, the avant-garde was never on the outside. It never was historically; it always was on the inside. So I start from that position.
But going back to the city; I chose that spot, I wanted to be in the centre. I wanted to feel that juxtaposition between being an artist and looking at all the people in the corporate world and thinking about how they think and how they operate. And even going back to that film that I love, The Sweet Smell of Success (1957) by Alexander Mackendrick, it’s filmed all in that area of Midtown. I love the history of Midtown. I love the whole idea that it is a conspiracy, and that there are only a few people actually making up the narrative of what’s going on. 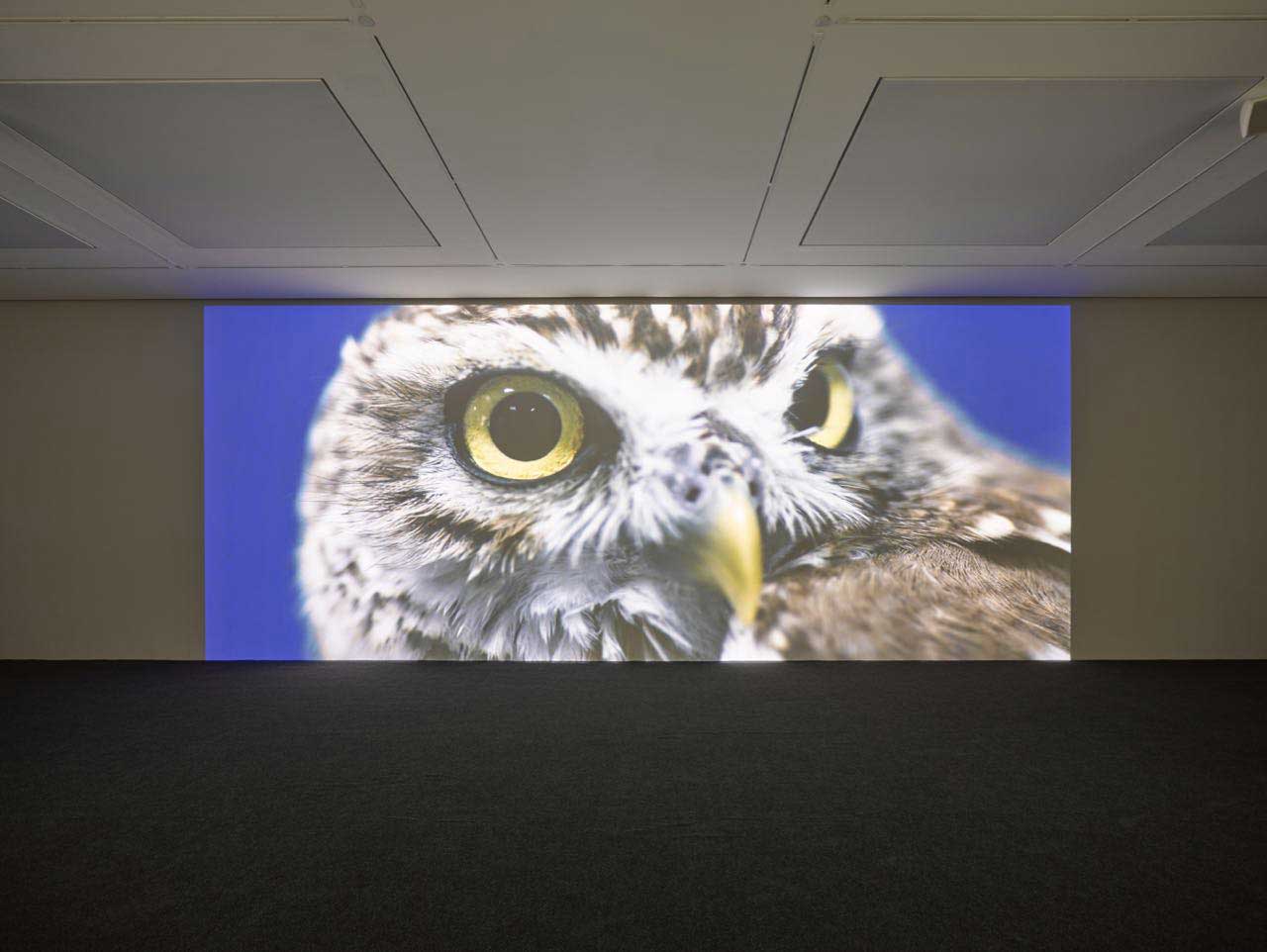 TDH: In such a diverse city.
SM: It seems such a diverse city, but there’s far fewer forces shaping things than we think. But the good point is actually these things are in flux. As an artist you’re constantly appropriating with your eye, but all of these things – if you film the Oscar ceremony, or you appropriate Hollywood and you re-contextualise it, it somehow shifts and it changes. Actually, Hollywood isn’t the same Hollywood anymore. These things, it’s not that they’re crumbling, it’s that they’re in flux. Power is not stagnant; it is not static. I don’t think that art is either. I think art is constantly changing. I try to make these very open images that have this element of flickering or pulsation going on.

TDH: I liked what you said earlier about not shying away from subjects you don’t like or agree with — that you can’t choose what is going on around you.
SM: I think you can only engage as an artist. Unfortunately, to be compromised, or to have some sort of limit on yourself is actually not necessarily a bad thing. There are so many examples of that in literature, but to have constraint or to have compromise or to deal with the concept of social failure, is not a bad place to start. 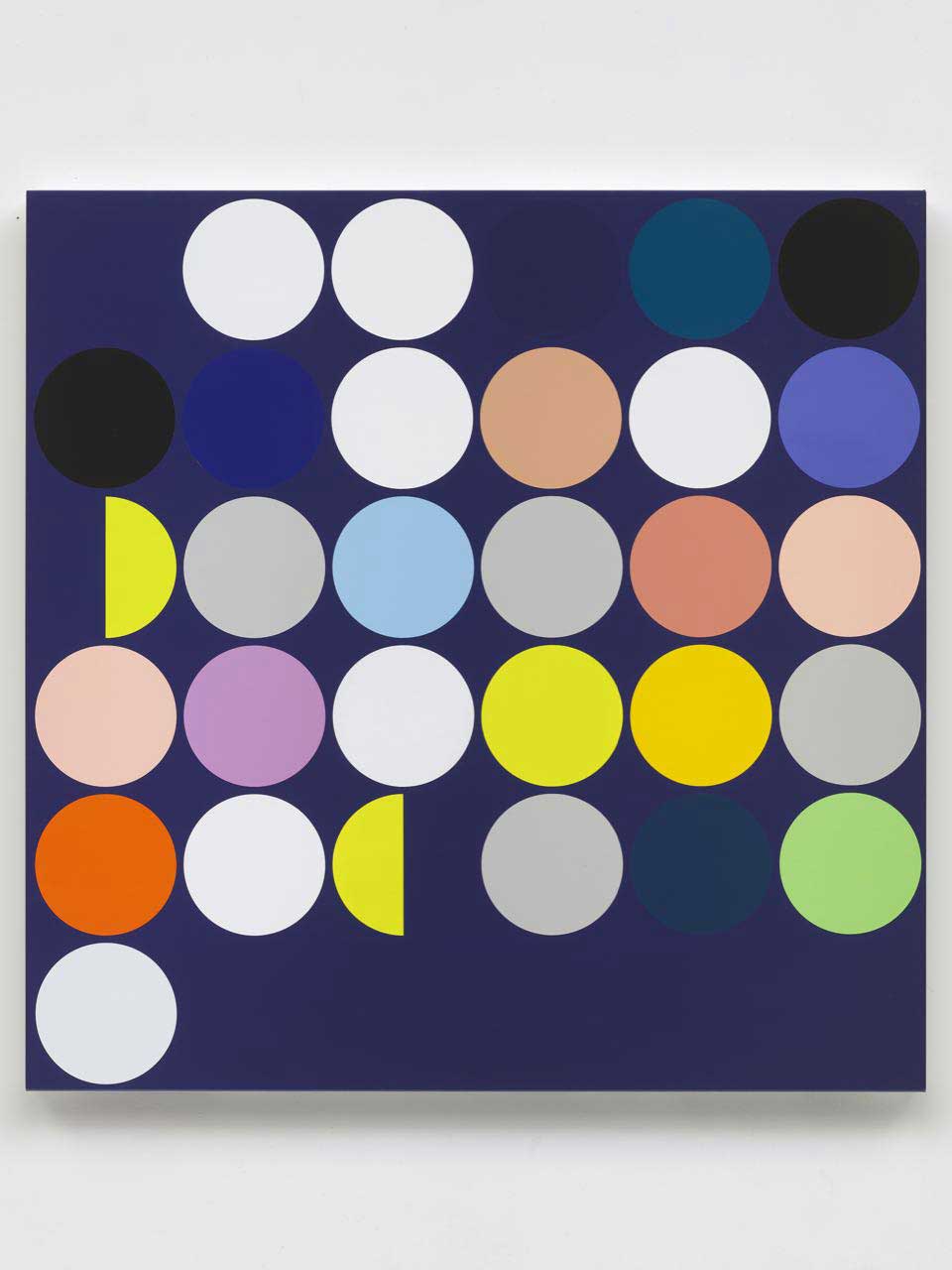 TDH: And what about the role of the artist today?
SM: Well, the role of the artist is paramount, but maybe at the same time it’s everywhere. So you have to deal with this issue; how do you deal with being pro-democracy, but actually also having importance. It’s a tenuous balance. You have to map it out and safeguard it. The difficulty for the artist is, yes, we like this democratisation of art — but at the same time one has to fight back in certain areas.

TDH: What excites you now?
SM: I love making audio recordings of my thoughts, my own voice. That sounds narcissistic, but I like the idea of documenting my own thought process, and my own reactions to things. I try to be as honest as possible. But of course the ego constantly tries to edit. It’s a really great process to try to think about the flow of one’s ideas, the flow of one’s reactions and emotions. If you really look at that very carefully you can see a map to somewhere else. So I try to do that. I’m doing recordings all the time. It’s about the idea of documenting the moment, but it’s also about trying to figure out where you’re really going and what is it that is really occurring. 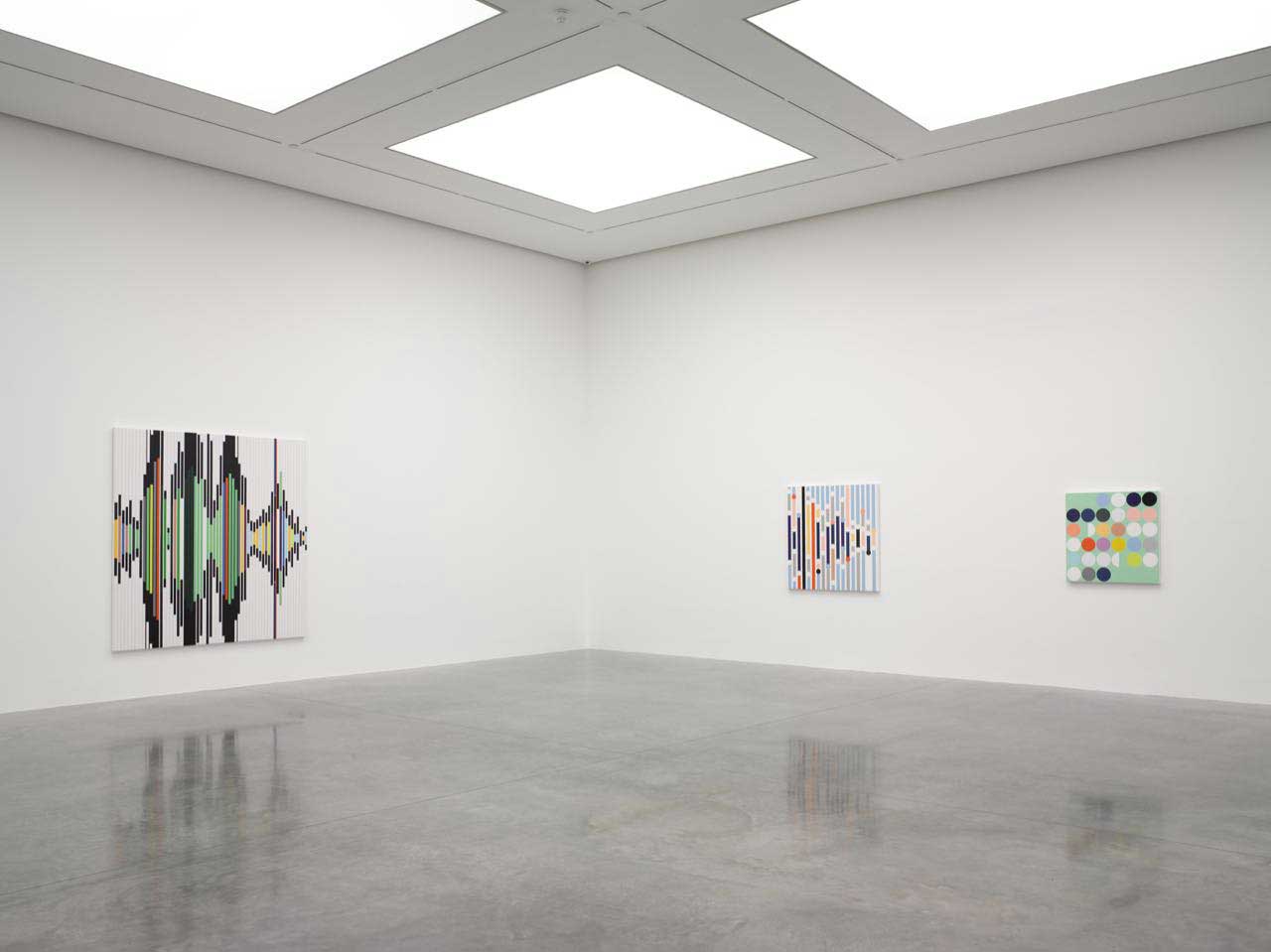 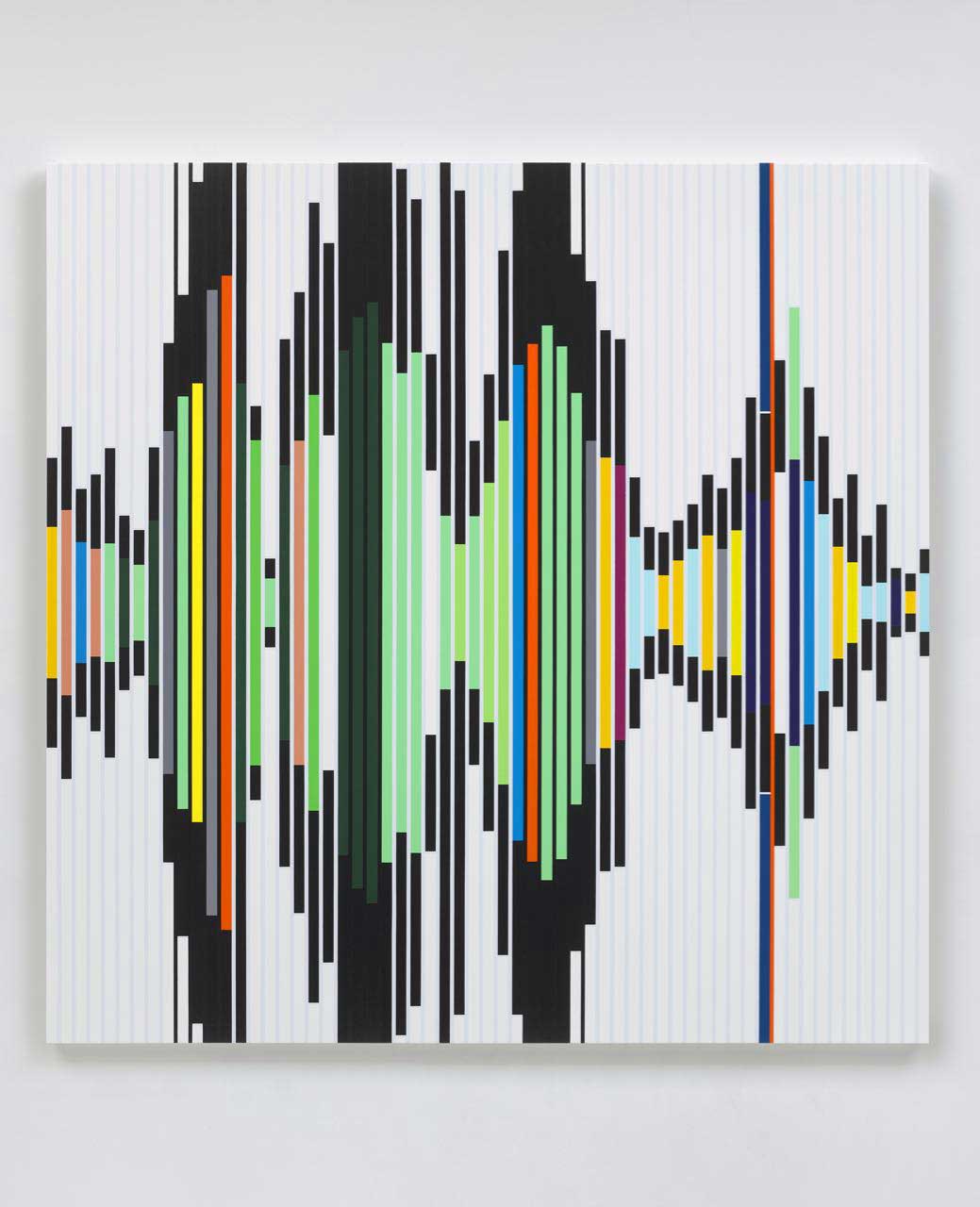