TDH: There must be a lot of trust in the materials she uses.
ED (laughs): Yes! But don’t worry, everything is very safe and secure, despite how it looks. We are a public institution, and of course, we are very conscious of this!

TDH: How does she begin her process?
ED: Phyllida lives and works in London, where she has a large studio. She begins with drawings, then she will begin to work out things like space and colour.

TDH: And she has a small team of young artists who assist her, which must add a certain energy to the process?
ED: Phyllida has worked with young people for a long time and is generally a great communicator, so it’s quite a natural environment for her to be in. And even though they assist her, she is involved in every aspect, in one way or another.

TDH: Can you tell me a little bit about how she works. It must be as interesting to watch the process as much as it is to view the finished product.
ED: It’s been fascinating to watch her as she’s creating. There’s the workload, to start with; she only has so much time to get the pieces installed, so there is very definitely a time pressure. And the flexibility she brings to her work – just the fact of not being sure how it will end up is, in itself, pressure. But she is incredibly adaptable and is very hands-on throughout the process, constantly reconsidering and adjusting. She is known for using the shortest route possible; she improvises, she’s messy, she’s not at all a slave to technique. In fact, some of her actual actions are almost violent, in the way she puts her work together. 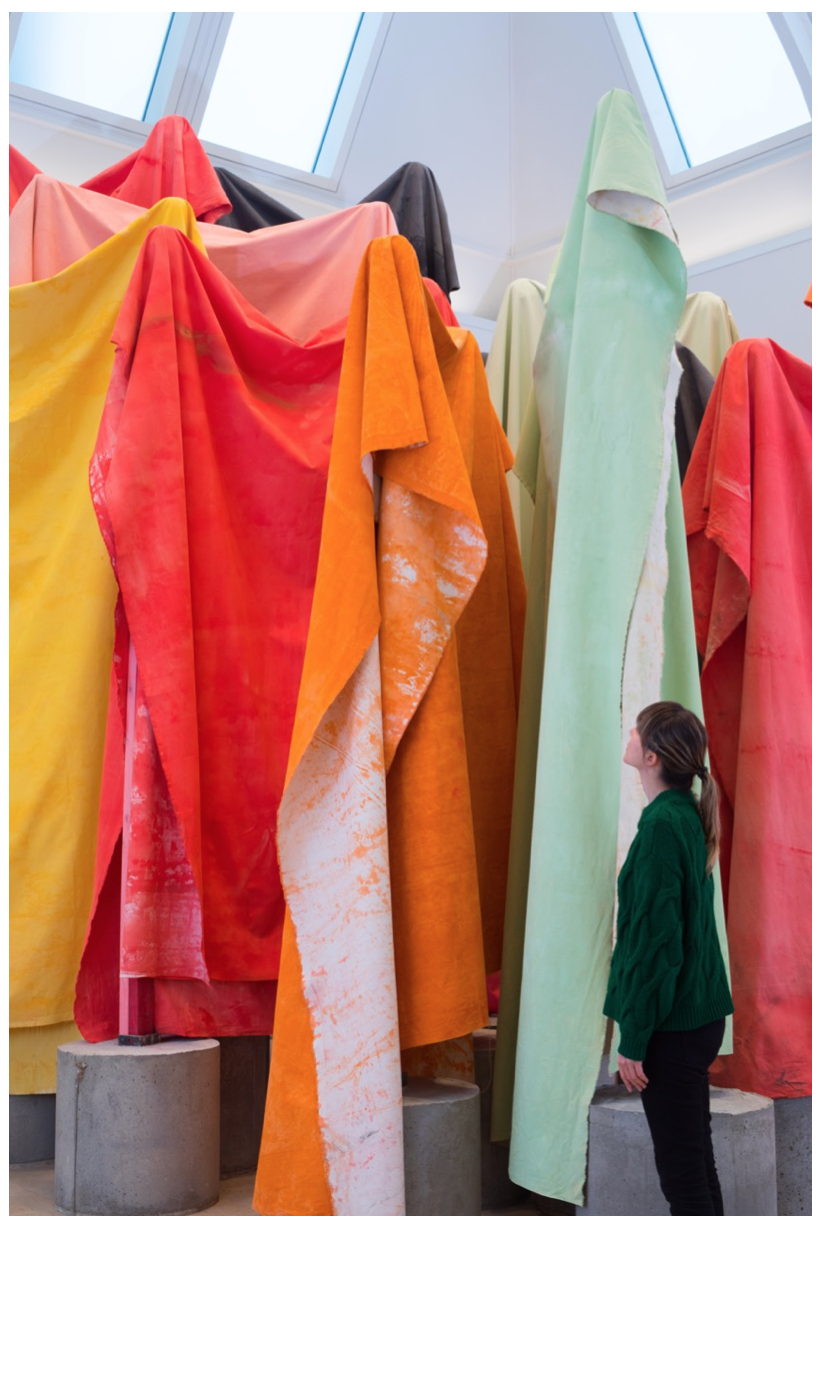 Phyllida Barlow came to prominence late in life. Born in Newcastle in 1944, she studied at the Chelsea College of Art and the Slade School of Art in the 1960s and went on to teach for several decades. She was elected a Royal Academician in 2011, was awarded a CBE in 2015, and represented Britain at the Venice Biennale in 2017.

cul-de-sac, her current exhibition at the Royal Academy, is comprised of entirely new work, conceived specifically for the three linear, interconnected spaces of the Gabrielle Jungels-Winkler Galleries. Visitors will move from the first to the third gallery and then back again, thereby giving themselves an opportunity to see the works from different angles. (There is a constant dialogue with space in Barlow’s work, in one form or another.)

The materials she has used throughout her career have also been defining; often mundane, everyday materials (expedient is one of the artist’s favourite words) re-contextualised in the creation of her own work. Colour is also a key element of Barlow’s work and cul-de-sac reflects this, filled with the bright, industrial hues she favours, informed by her daily encounters with urban environments.

Prior to the opening of the exhibition, I had a chance to talk to Edith Devaney, the Academy’s Contemporary Curator at the Royal Academy of Arts. Devaney is also head of the Royal Academy’s annual Summer Exhibition, and has worked closely with Barlow on the show from its inception.

Trisha D'Hoker: How long have you known Phyllida?
ED: I’ve known Phyllida for a few years, before she was a Royal Academician, but I had a more recent opportunity to get to know her, as she was also on the committee for the Summer Exhibition last year. Grayson Perry headed the event — and, as is custom, invited selected Royal Academicians to form the committee that decides how the art will be displayed. Phyllida was given a gallery to look after, and It was fascinating watching her hanging other people’s work. It also gave me a chance to observe her, with a view to her own upcoming exhibition. For example, she has a way of using space – it actually becomes one of the elements of the piece.

TDH: How will this exhibition differ from her previous work or will it?
ED: If you take the Venice Biennale, when she took over the Great Britain Pavilion in 2017 — which is only two years ago — she has actually changed an incredible amount in that short time. You could even say this was a reaction to that exhibition. She was, as always, acutely aware of everything around her at the time – the densely-filled rooms, even spilling outside of the building itself. She is constantly pushing parameters and challenging our perceptions. So I think now, in response to this, you will see a radical difference. cul-de-sac is more about paring things down, taking a more economic approach to how she arranges things. There is also a sense of each work in isolation now, which wasn’t present before — as well as in relation to the others. 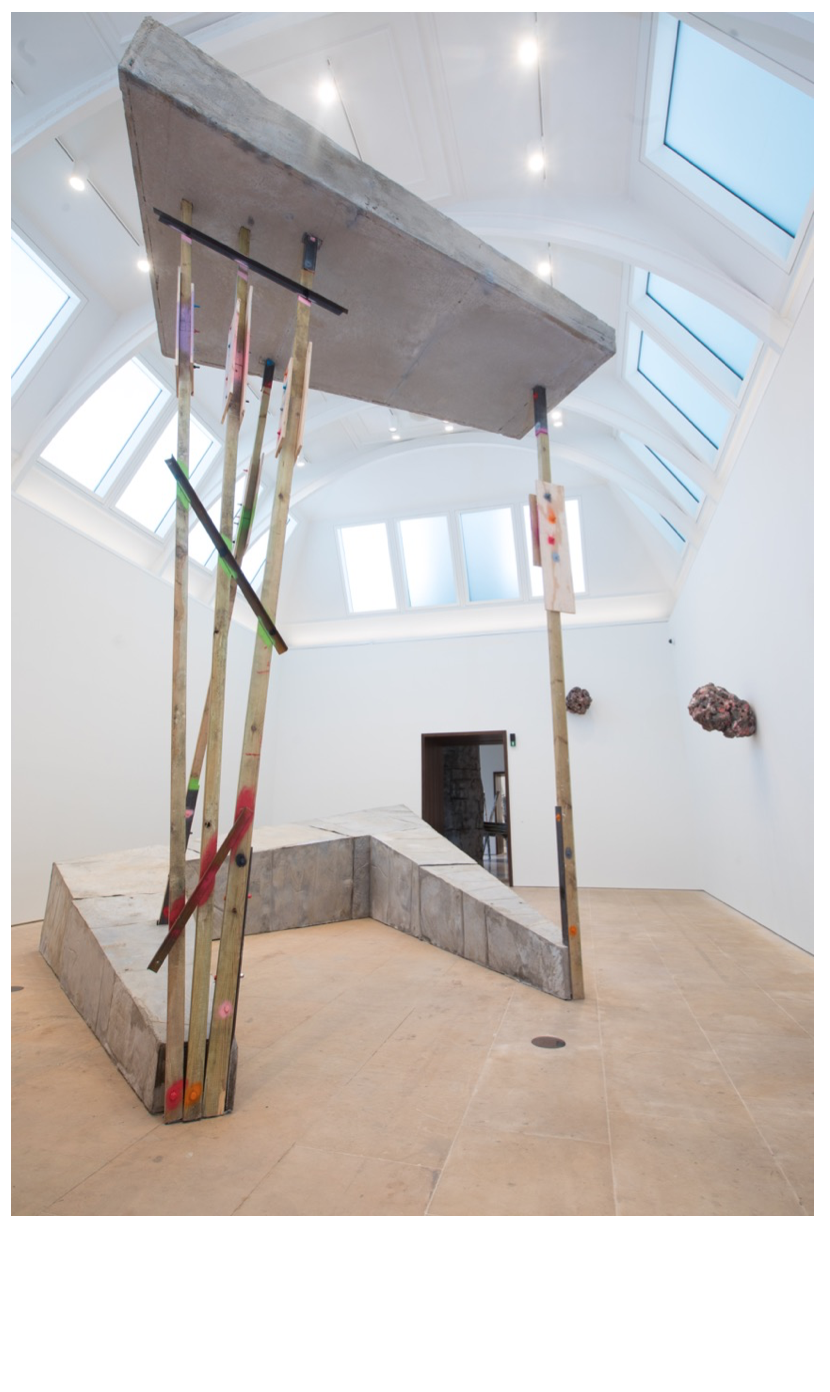 TDH: I’ve read interviews where she describes her work as performance as much as art in the traditional sense.
ED: She’s incredible. It is like a performance, where she is the creator, director, producer, and actor! And it continues after she has finished installing her pieces; as the visitors move through them, only then is the performance complete. She has an acute understanding of how people move – not in a choreographed, limited way, it’s deeper than that – more an understanding of how they might move. And this interests her. She has always been interested in how people perceive works of art.

TDH: Especially sculpture?
ED: With sculpture, you have to navigate the object, and your perception is necessarily going to change. With paintings, there is only one way to see it, one viewpoint. But Phyllida has an acute understanding of sculpture having a presence, a sense of how it occupies space, and of the visceral response we get from it. It’s a fascinating notion, that [sculpture] is therefore much more demanding of the viewer. You approach it from one direction — but as you move around it, your view changes, and you are no longer able to hold the previous viewpoint.

TDH: With her work, there are just so many different viewpoints. You see something different every time you approach it. And it is very untraditional sculpture.
ED: If you look at her contemporaries, it really is quite incredible how far away from all that she is. She’s always been drawn to the impermanence and fragility of the materials she uses in her work. She exposes the seams and joins; it’s gritty, and messy. And it’s always been very much about materials to hand. She loves the drama involved — where it always seems about to collapse, on the brink of chaos. This, along with the element of humour that is another feature of her work, does go against what most people associate with sculpture.

TDH: As a curator, where do you start with a Phyllida Barlow exhibition? In this case, it must be very different from, say, an artist with a back catalogue, or an artist who has already created a body of work?
ED: She really is totally unlike anyone else. It’s just fascinating to watch, to be present when she’s creating, to see the flexibility. It is like a performance, where she is constantly working out the relationships as she goes; relationships between the pieces themselves, the space involved, the colours, the materials — which are often themselves very delicate.