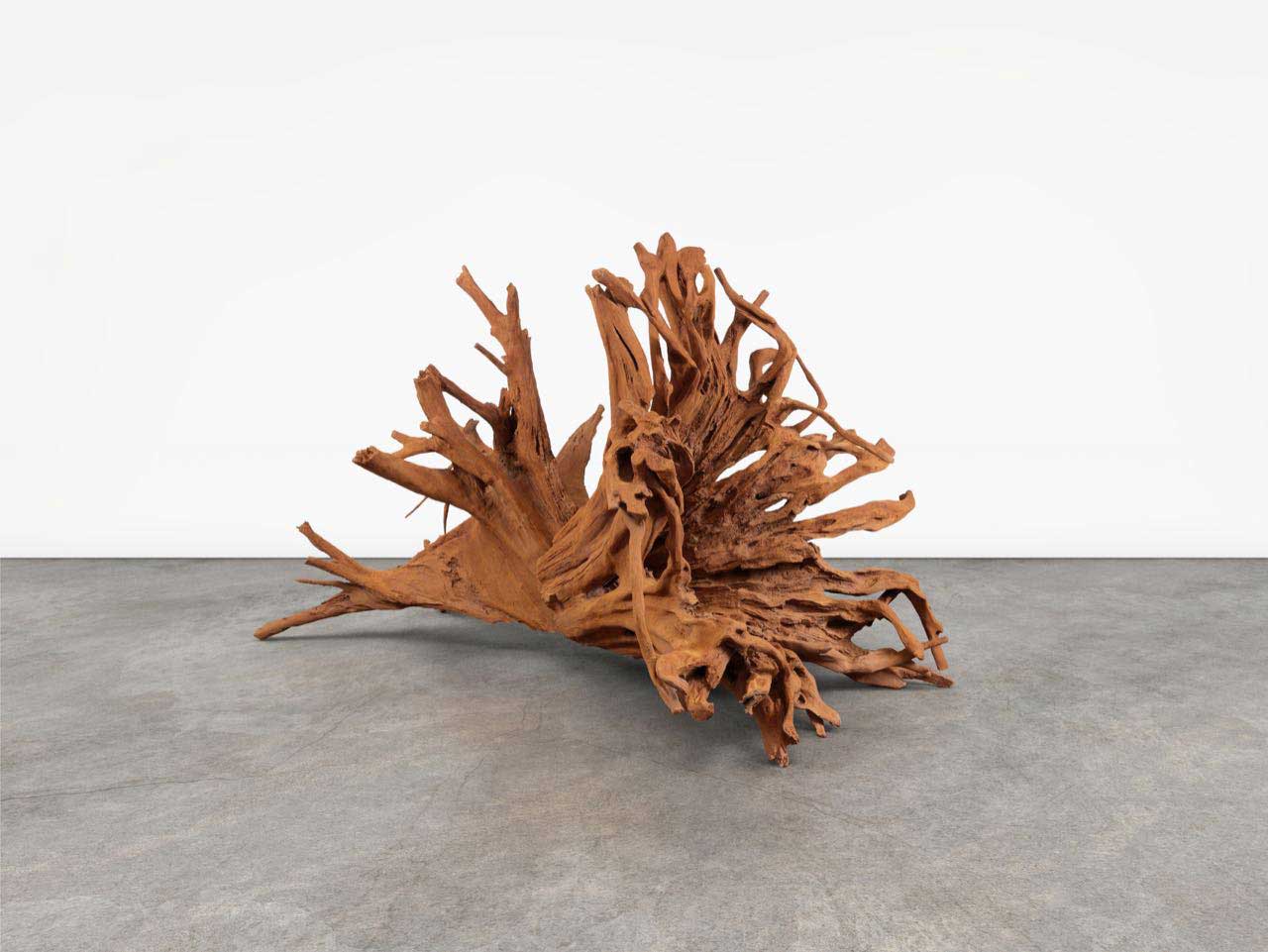 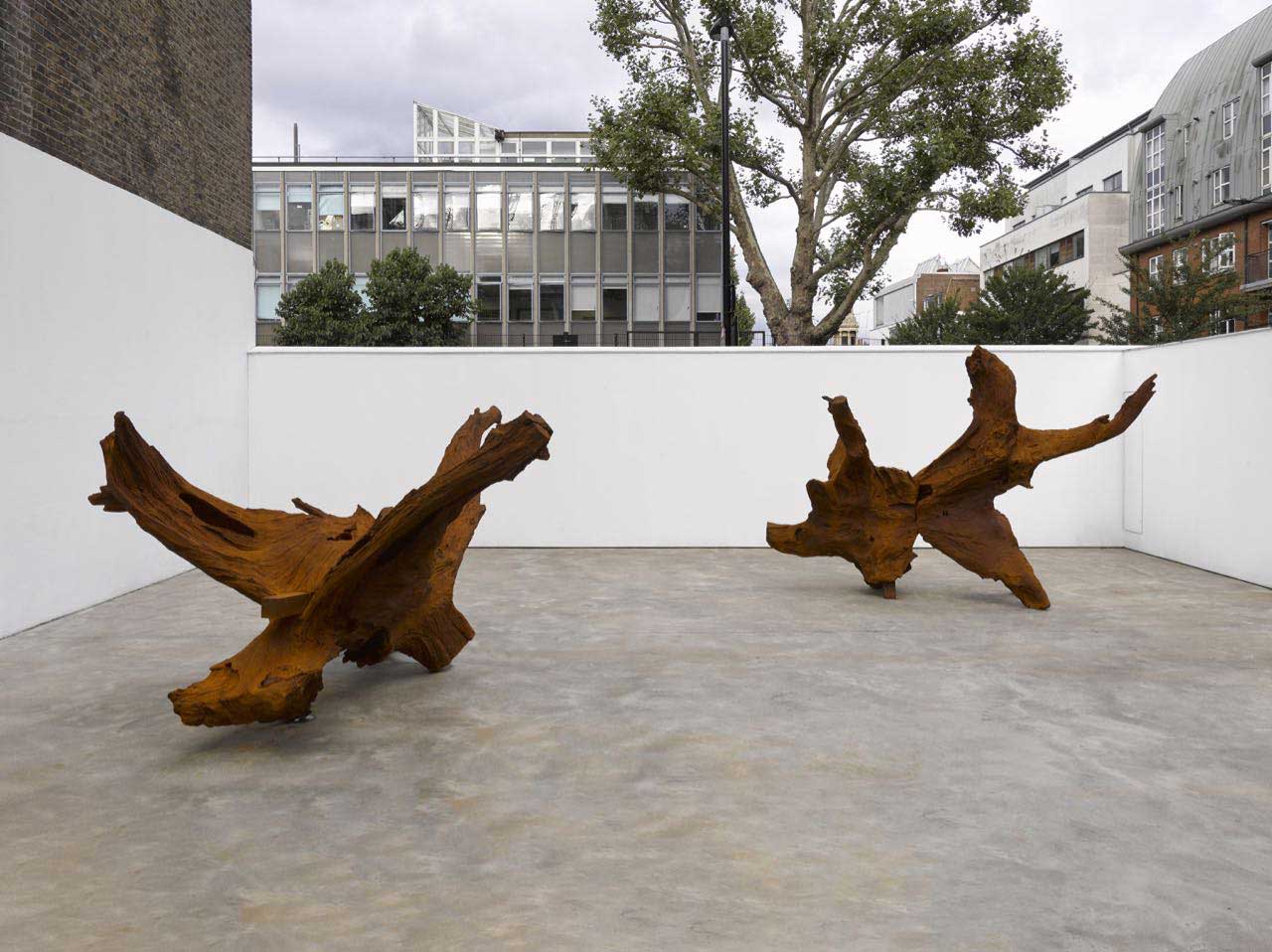 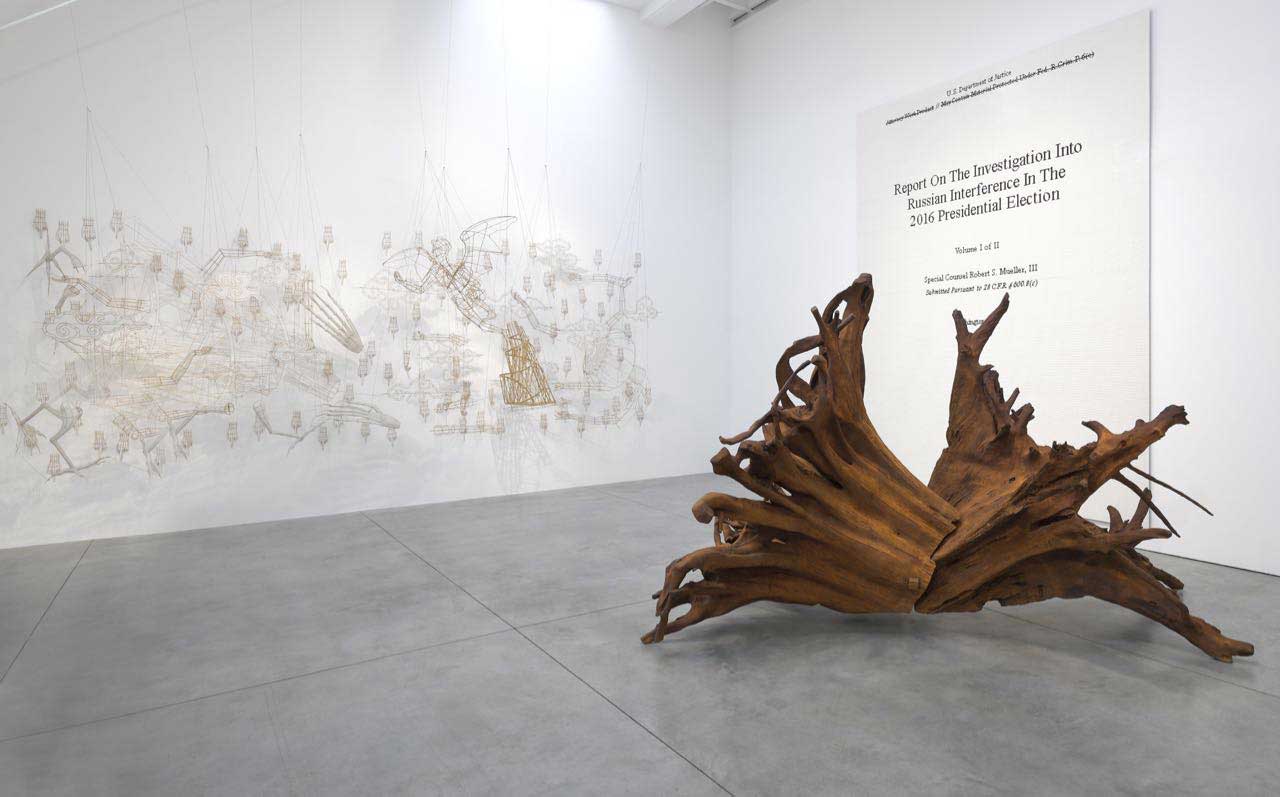 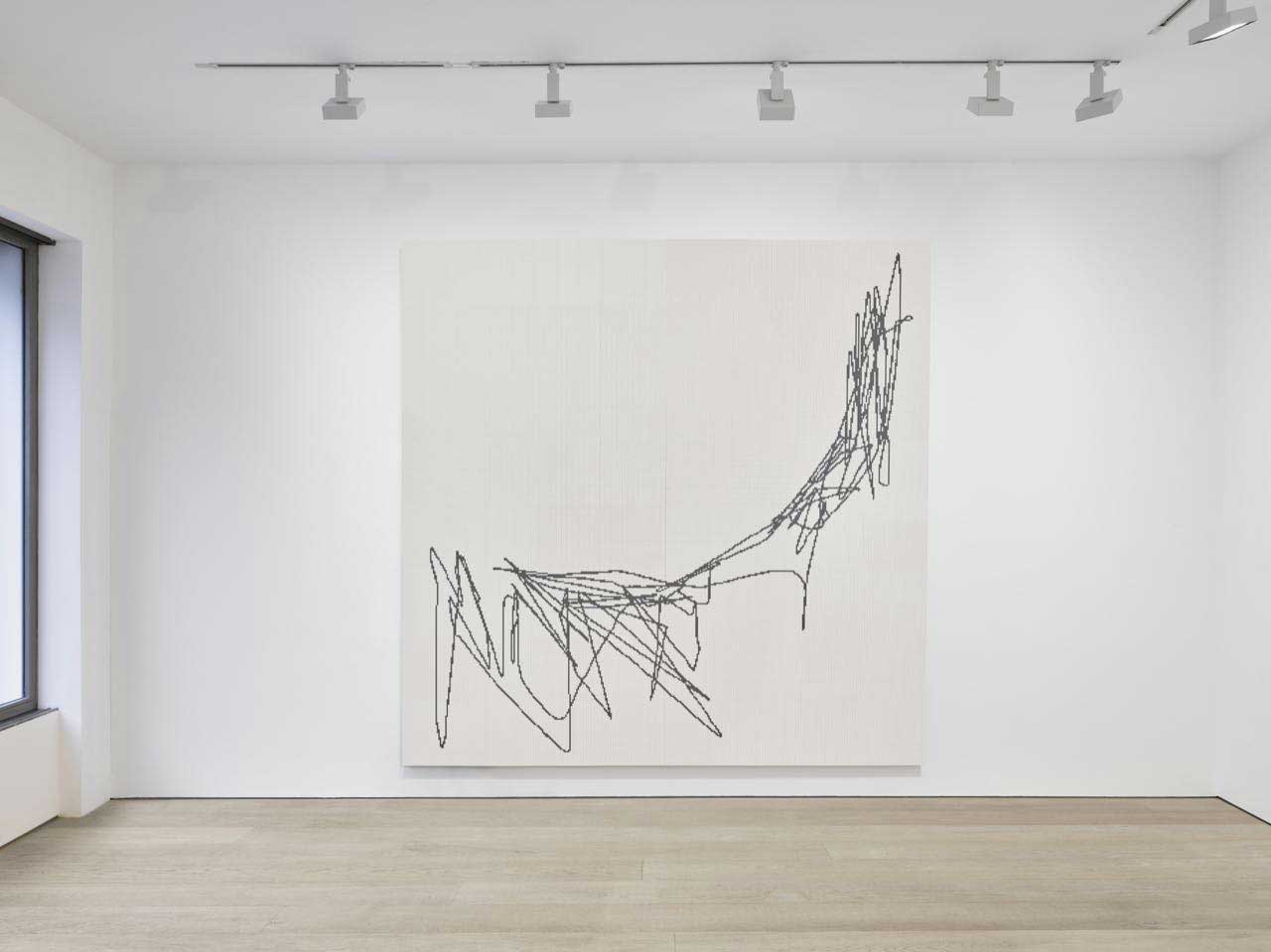 TDH: It looks oddly modern, like pixelated images.
GH: Exactly. He’s thrilled with it as a medium. These are a little different, he indicates two more abstract works done in Lego. The one in the front gallery is the front page of the Mueller report. As a conceptual work, it’s not really passing any judgement on the Mueller report, it’s just saying this happened, part of it is redacted. He’s made other pages where it’s almost all redacted, black lines throughout, so then it becomes abstracted in some way. The piece over there, with the different lines – those are in fact the paths of rescue boats, full of migrants, trying to land in Italy. So while it looks like a geometric drawing, it actually has this heavy, human story behind it.

TDH: Ai Weiwei identifies as an activist first and foremost; is that different for you as a curator and as a gallery when putting on an exhibition, as opposed to an artist who is not so active in this way?
GH: Well first of all, everybody is multi-dimensional and our profession is to support artists and our business is to sell their work or to present their work, to put their work before the world – that’s what we do. And artists are multi-faceted; if you’re supporting the artist, you are concerned with their wider personality, wider culture, their public presence. And Lisson Gallery, since it started fifty years ago, very explicitly did not deal in comfortable representational painting. It dealt with conceptual art and minimal art, all of which had a kind of political small ‘p’ motivation behind it. Many of our artists have strong political content in their work and that’s kind of part of the territory.

Ai Weiwei is interesting in regard to Lisson’s history because he draws on minimalism; that’s clearly a point of focus for him, which relates to our earliest generation. He’s also a sculptor; he’s got points of connection with Richard Long, Tony Cragg, Anish Kapoor. He’s of that generation, different, but still of that generation. But then he also has this kind of social-political energy that a later generation of artists has, from the 2000’s on.

The exhibition, Roots, began with two of the monumental works made up of ancient roots and trunks. Sourced from Brazil, the wood was moulded and conjoined using the ancient ‘lost wax’ technique, then cast in iron and covered with a patina of orange rust. The resulting creations sat on the floor, positioned throughout the galleries, in the phalanx of rooms and outdoor courtyards that make up the Lisson Gallery. Accessible and intriguing – some are like playful dinosaurs, others reminiscent of giant primeval sea creatures. Generally perceived as solid, grounding forces, roots are in fact dynamic: growing and adapting, forging fathomless networks using unseen communication. But here, transplanted to the pristine space of a contemporary west end gallery, they sat displaced and disconnected.

The sculptures were one of three different forms of art-making up the show, each reflecting the fragile world in which we live and our fragile position in it. Sitting alongside the heavy, other-worldly sculptures in the front gallery were two large intricate hanging works of art. Each piece comprised a series of delicate, floating figures, symbols and fantastical hybrids of mythical beasts mixed with Ai’s previous works and childhood symbols. They were made using ancient kite-making techniques of stretched silk over bamboo structures.

Along another wall, overlooking the bamboo and root sculptures, was a giant wall piece made of Lego, a rendering of the front page of the Mueller report into Russian interference in the 2016 U.S. election, complete with redactions.

Just before the exhibition opened, I spoke with Greg Hilty, Curatorial Director at Lisson Gallery, about the show and the gallery’s relationship with the artist. 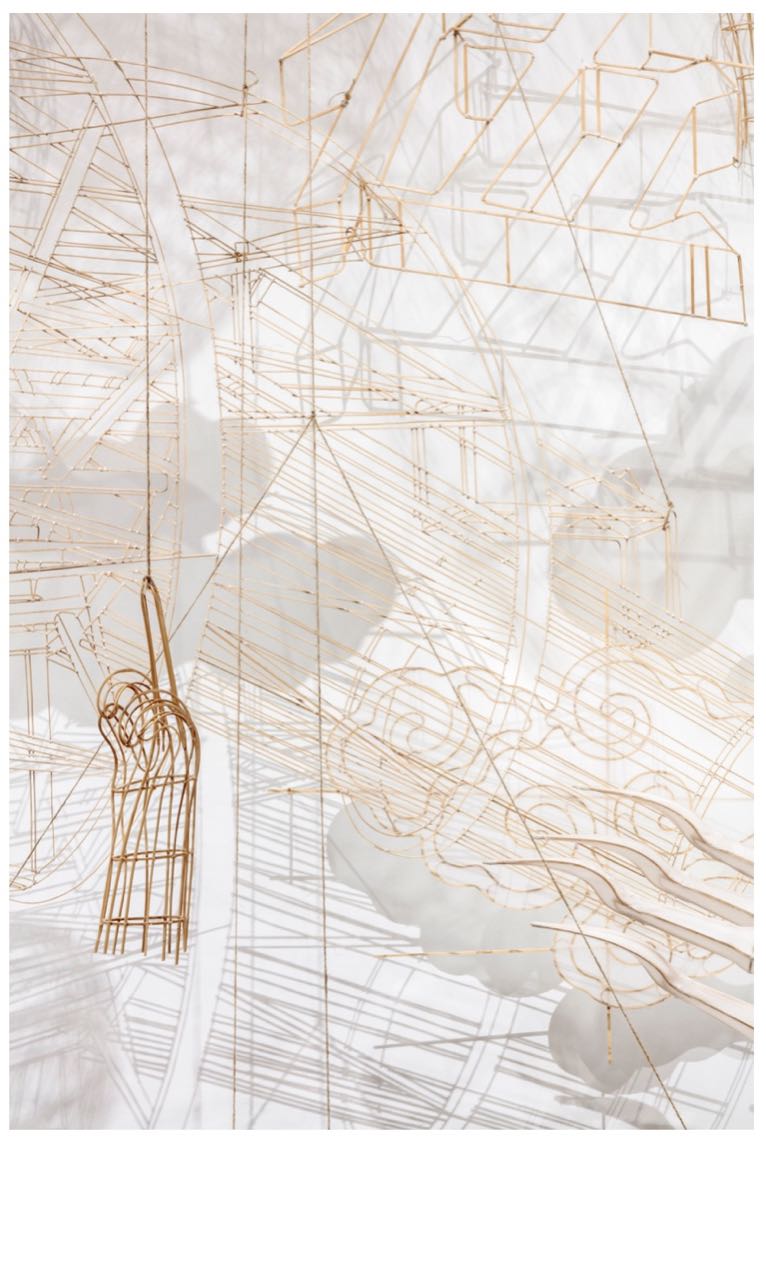 Trisha D’Hoker: How long have you worked with Ai and how have you seen his work evolve over that time?
Greg Hilty: I’ve been working with him for about ten years. It’s been very interesting, the work has certainly evolved in range. In the first show we presented a very classic Ai Weiwei exhibition: works in marble alongside some of the coloured vases he’s very well-known for, and a selection of wooden sculptures. This was important because he had been seen a little bit before in Britain previously, but that was the moment when people were paying more attention to him. The first show here at Lisson was in 2011, when sadly he had just been arrested in China.

TDH: It feels like he’s been around for longer.
GH: Yes, well in 2010 he did Sunflower Seeds, at Tate Modern, and 2008 was the Chinese Olympics, with which he was involved. But also through his blog, his writing about politics in China – with these things he was becoming more well-known beyond the art.

TDH: It’s interesting what he said about politics interfering with nature.
GH: So interesting, you can’t get away from it. But I think that’s what has changed with this show. In the past he has been very outspoken and he’s not hiding it now, he is of course acknowledging the politics, but also at the same time he’s getting deeper. With politics today there’s change every five minutes; you need to get at all the underlying layers. The roots have this kind of deep atavistic source in nature, obviously, but also in the history and culture of Brazil, where the work originated, and in the mixture of the different cultures…Brazilian, Chinese, etc. And alongside these, we are showing the bamboo works.

TDH: The bamboo works are magical.
GH: And they are so congruent with the roots, because of their playfulness, but also at the same time they’re so light, beside these heavy, solid pieces.

TDH: Tell me about the third part of this exhibition, the Lego works.
GH: He’s been making works in Lego now for about five years. He did a big project in Alcatraz, where he made Lego portraits of prisoners of conscience. And he’s made Lego versions of his Zodiac head sculptures. He likes it as an alternate form of painting; he doesn’t like painting as a medium in itself. Also, these are found materials, which is important to him. And with Lego, you can just buy any colour, make any image, on any scale. 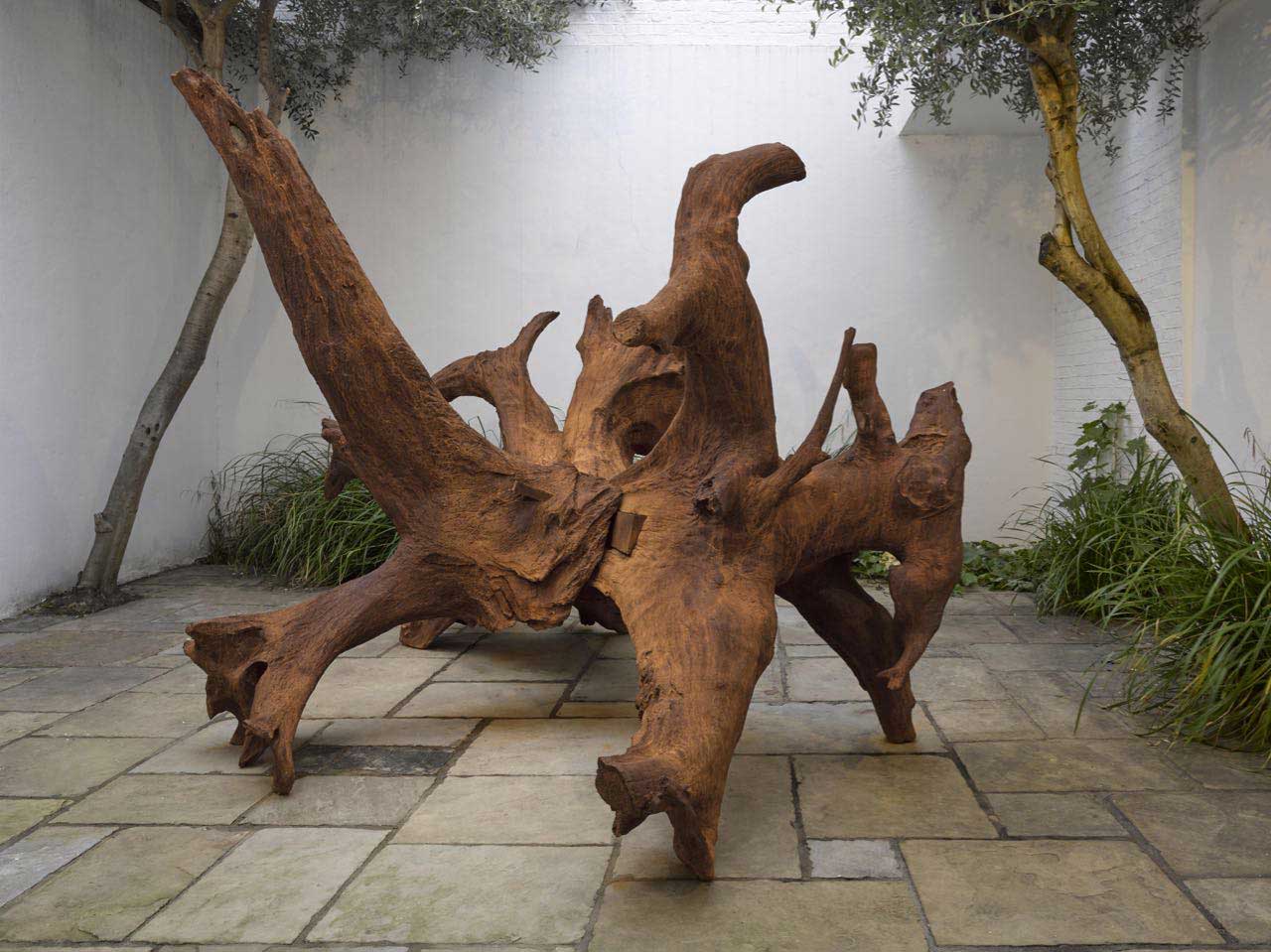 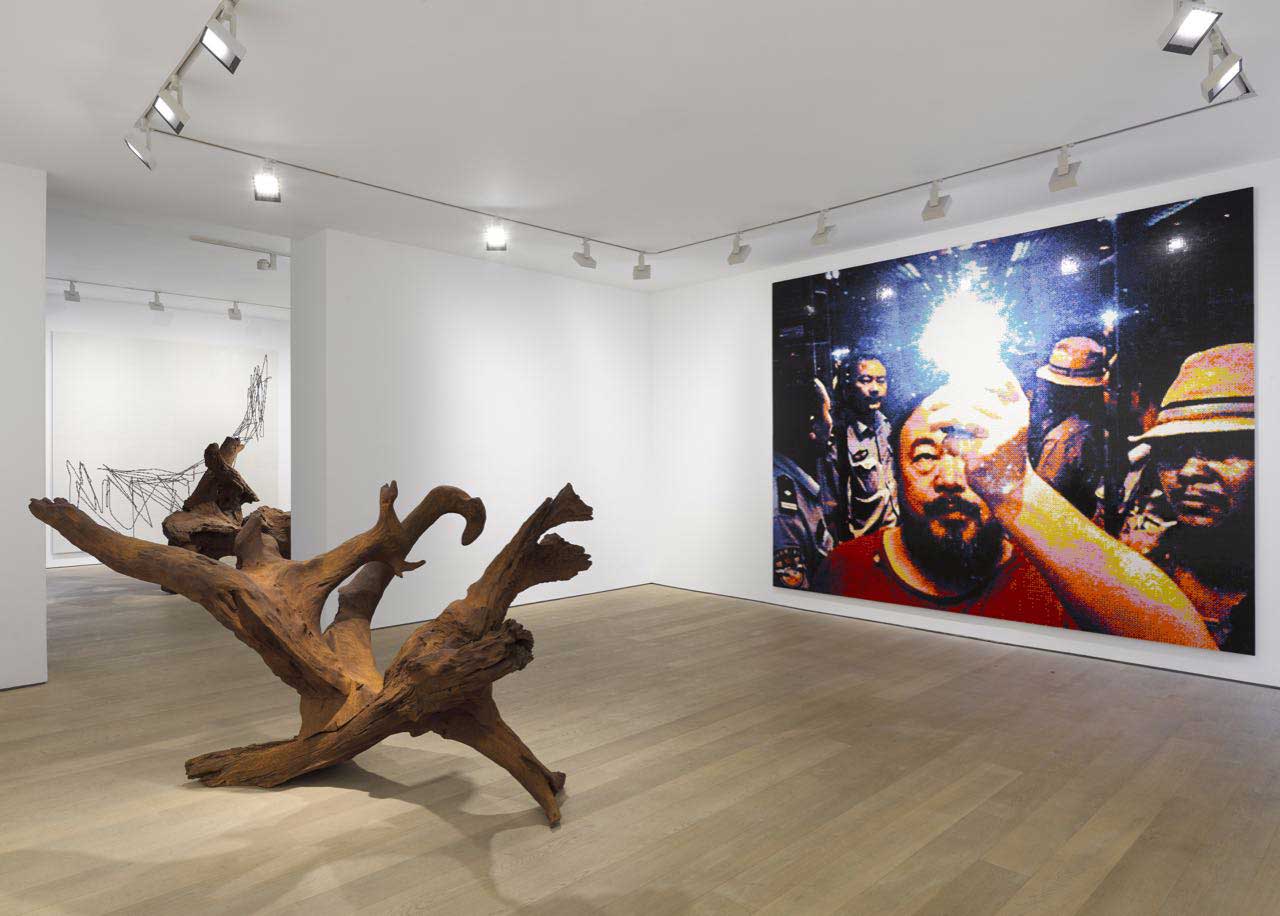 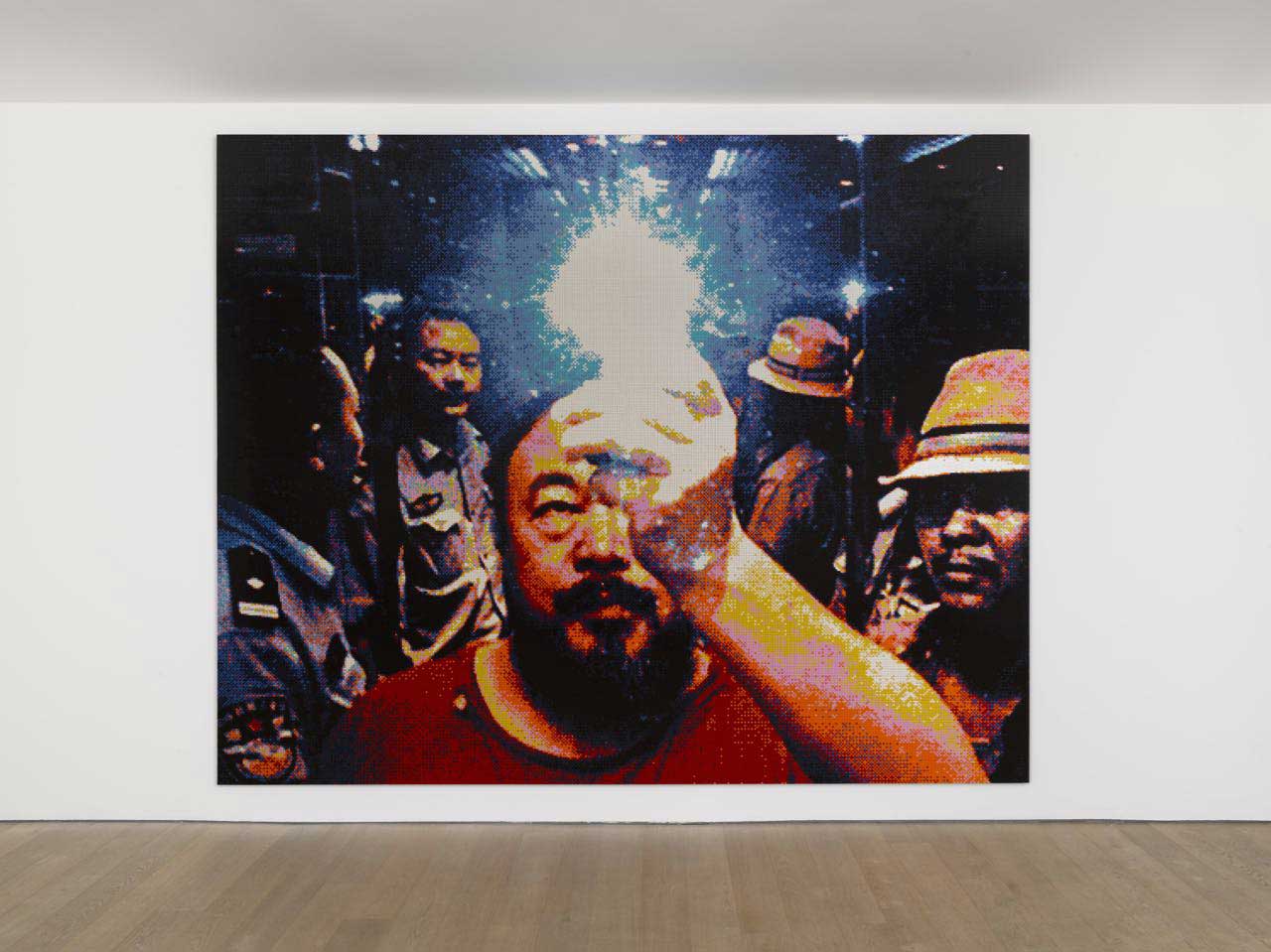