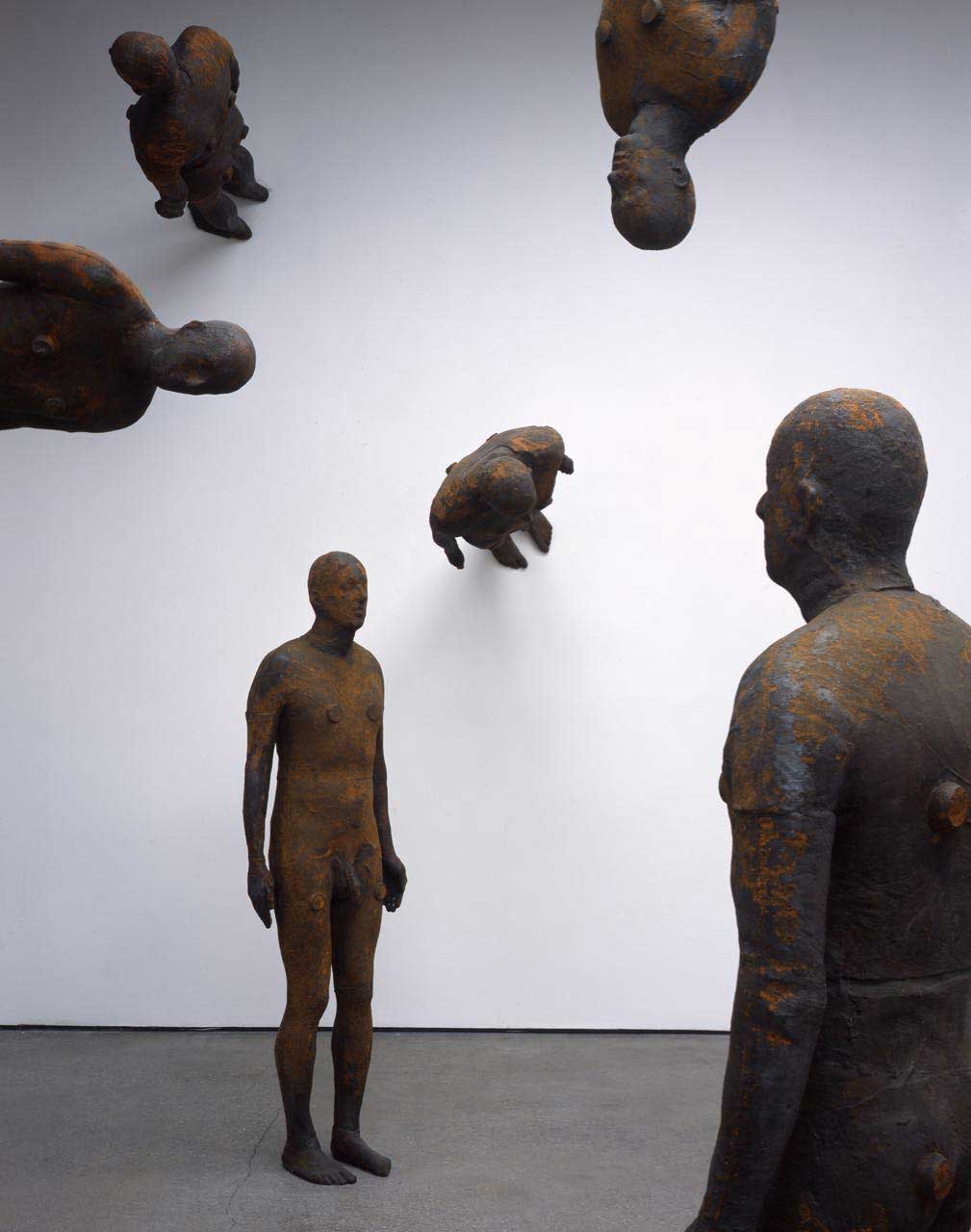 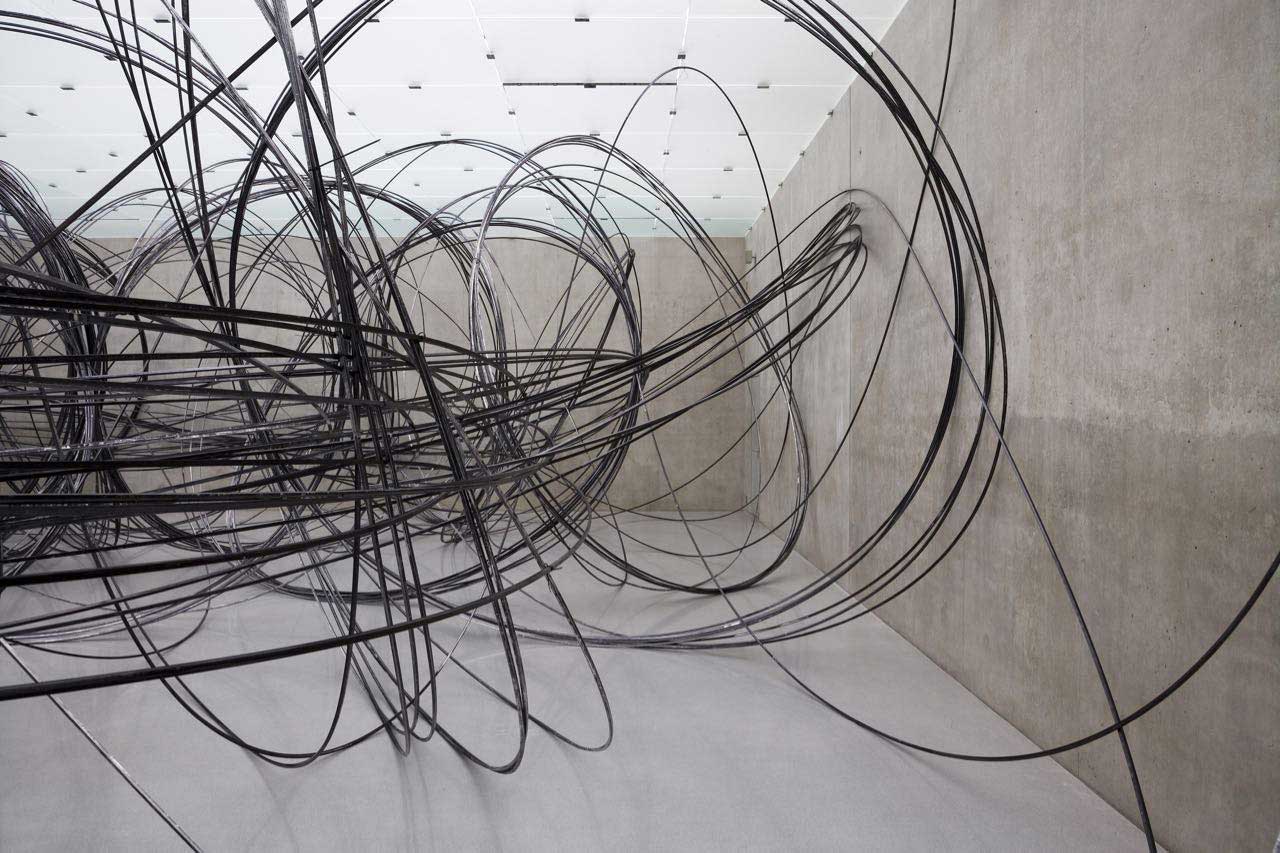 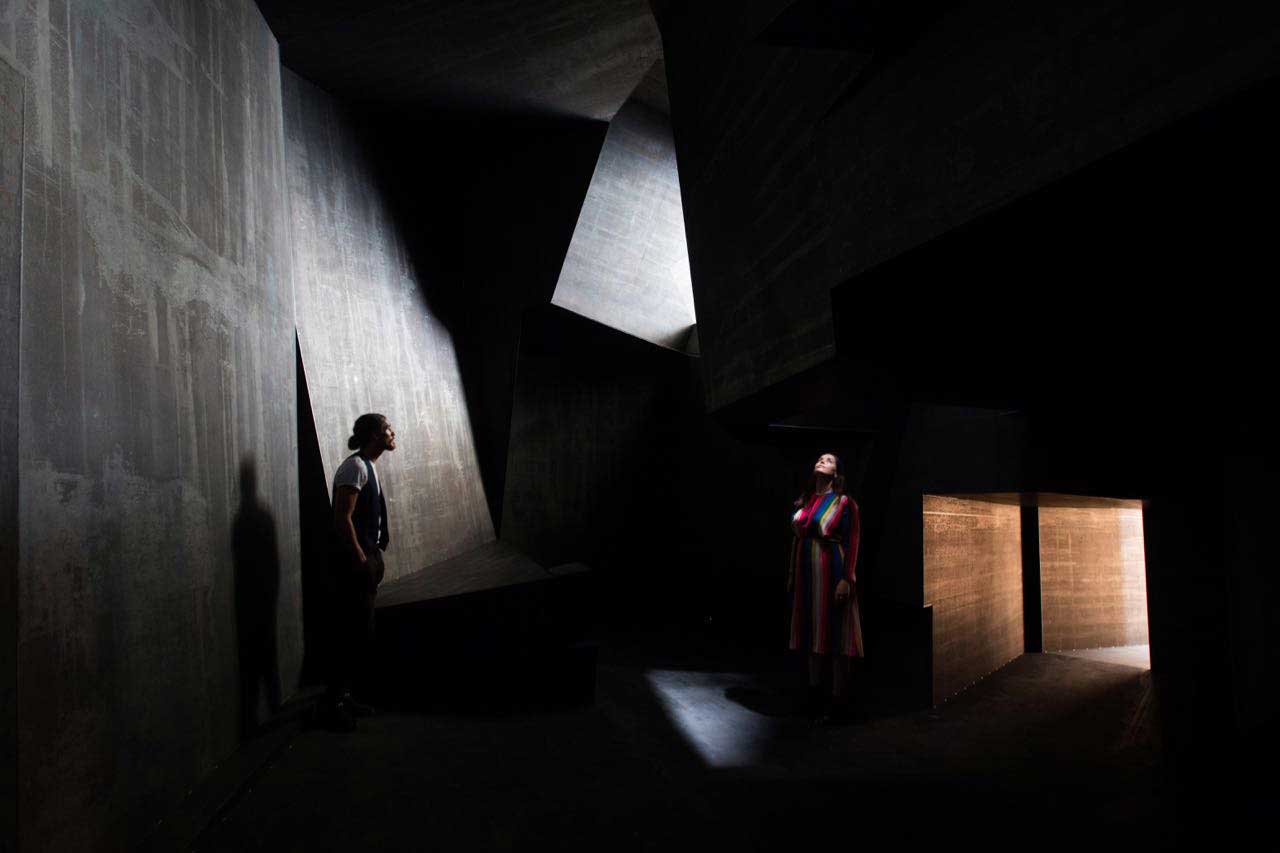 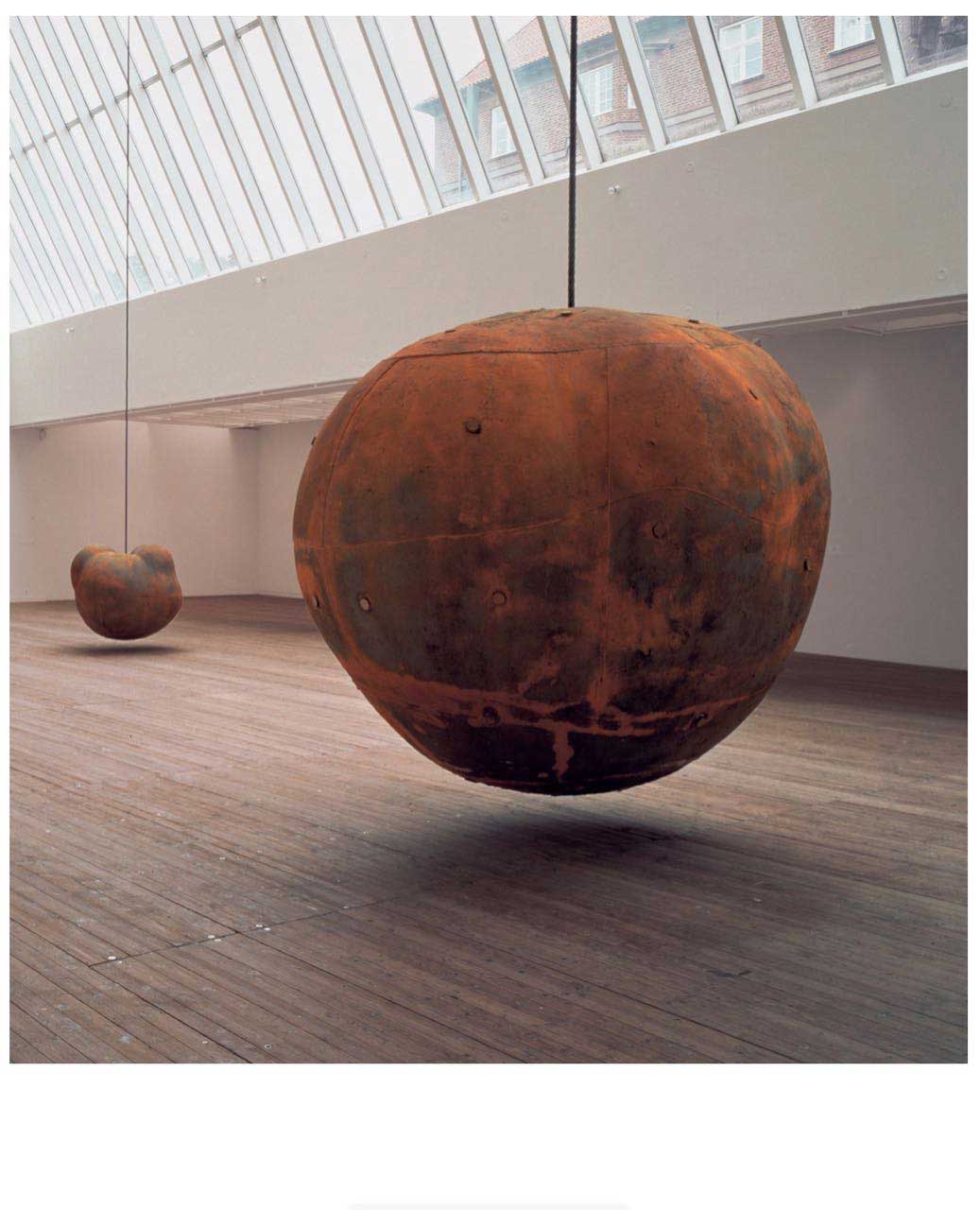 Antony Gormley (b. 1950) is an internationally acclaimed British artist, well-known for his sculptures, installations and public works. Some of his best-known works in the UK include The Angel of the North, 1998, a 20-metre high sculpture near Gateshead and Another Place, 1997, where a hundred cast iron figures stand, on a beach near Liverpool, looking out to sea. His figures are cast from his own tall figure, using the experience of his own body as a ‘testing site’. From the beginning, Gormley has been concerned with the human body and in particular its relationship with space and inner-space. It is this inner-space that so captivates him, a place where there are no limits, no dimensions – only imagination and potential. It is, as he’s pointed out, the only space we inhabit for our entire lives. And he sees sculpture as a way to connect us to this inner space.

Once inside the exhibition, our attention is drawn from rooms full of figures, positioned at all angles, disregarding horizons; to tiny apples and bitten bread; to wires stretching across spaces at head height, disrespectful of room boundaries (or tall people); to architectural representations of the body that take us inside and strip away our senses – challenging and stretching our perception throughout.

In the days leading up to the opening, I spoke with Martin Caiger-Smith, who worked with the artist in shaping the curatorial vision for the exhibition and has written extensively on Gormley. He is also Head of the MA Curating the Art Museum programme at the Courtauld Institute of Art.

Trisha D’Hoker: You have had quite a long relationship with the artist.
MCS: I’ve known him for twenty years and have worked quite closely with him for fifteen. I used to run the exhibition program at the Hayward Gallery, and was still there in 2007, the year he had his last show there, but I left before it opened. But I decided to write a book, a small book, and then a larger book, so that took a number of years. This exhibition has taken four years of talking and planning to put together.

TDH: How have you seen the exhibition evolve over that time?
MCS: Over those four years, we have thought into these spaces every single possible way to work, really thought out how to do it. You can see it in the drawings, in the workbooks over there (he indicates to the glass cabinets in the gallery where we are standing, displaying the planning, the process), endless ideas about what could be in this space, what we could do there. 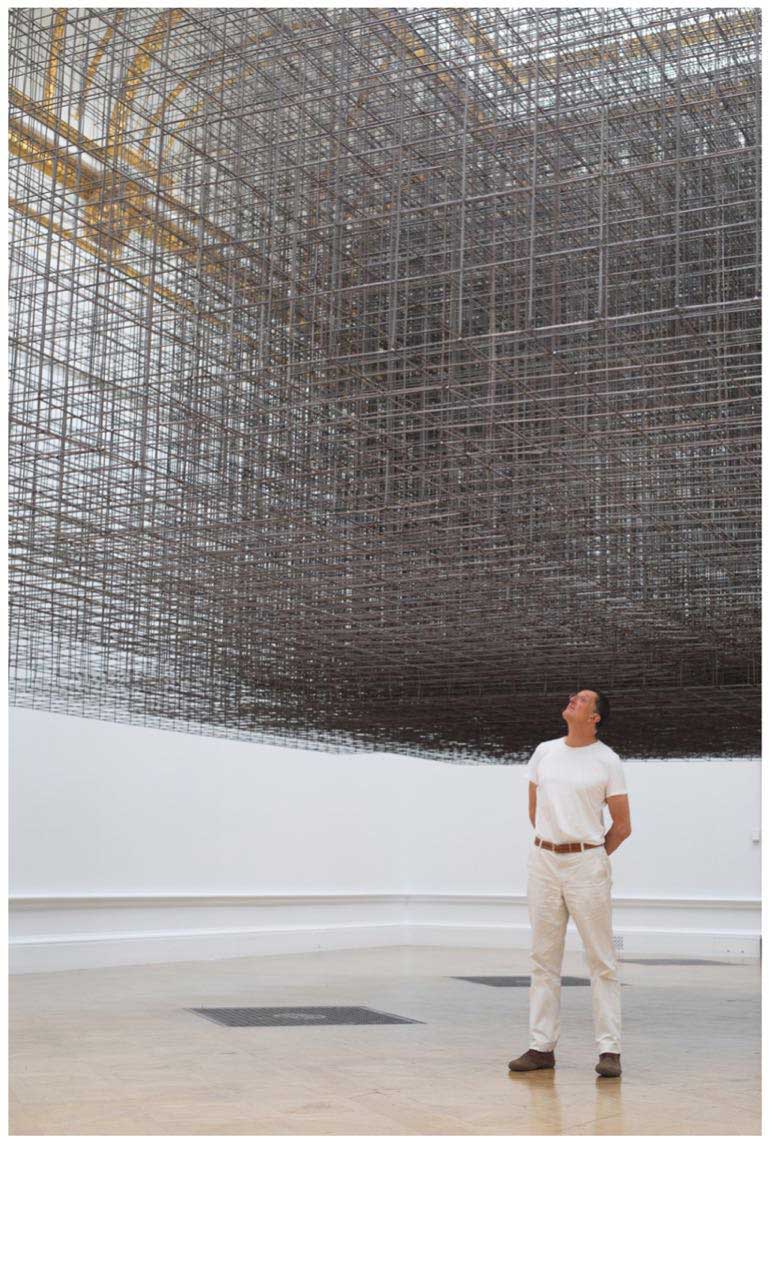 We sat down during the Ai Weiwei show four years ago, in this space, and just drew on a piece of paper, on a floorplan, like that, and thought, after half an hour, yes, we’ve got the show! But really, since then, every possible way has been considered, just trying to think about what works, in what space, but also what works together. It’s not just a matter of putting together twelve of his greatest hits. It’s the rigour, and the pacing, and the change. But I think what we’ve managed in the end is a really tight, cohesive, quite riqorous show, where even though the work looks very different in form, actually everything relates to everything else.

TDH: How do you think curating has changed, especially with a show like this?
MCS laughs: Well, I teach curating and there are times during the last four years where I’ve thought what we’re doing has nothing to do with what I teach! It’s been an extended conversation; when you’re working with a living artist, you’re trying to work with them and you become, in a way, part of the creative process. And part of that creative process is questioning, challenging, being a sounding board – and Antony is very good at listening.

TDH: What are the extra challenges for putting on an exhibition in an institution like this?
MCS: Well it’s a bloody great grand building, with all the traditions, and I think, Antony, although he is an Academician since 2003 himself, has always had this slight ambivalence towards being part of the establishment, part of an institution.

TDH: This idea of pushing back.
MCS: Push-back is a good way of putting it. It’s a big challenge to take on and I think in a way he’s kind of come back, challenging the building, and in a way, by extension, by indication, the academy, as in what an academy has stood for – tradition and convention and so on. And the idea of the academy itself, it’s not just another big building. Have you been around yet?

TDH: Yes, some, but not all of it yet. What part are you most proud of?
MCS: For me, it’s quite difficult to break it down into individual works.

TDH: What did you find notable then, or unexpected, when putting it together?
MCS: Really, what is notable is how it seems that every work kind of relates to every other work, and it comes back to this, whether they’re tiny works or rooms-size, those ideas are there.
Cave, this enormous construction, have you been through? It’s a work that you walk into, and in some ways, the darkness in there, the feeling of the interior, it relates to some of his very early works, the lead works, the idea of being wrapped up.

TDH: I’ve recently read the new Malcolm Gladwell book, Talking to Strangers, and it talks about ‘coupling’, the idea that place plays a larger part in why something happens or comes into existence than we realise.
MCS: Antony would certainly believe that. And one thing I’ve certainly observed in him over the years is he’s got an incredibly astute way of summing up the possibilities and also the challenges of a space, be it outside or inside, or in the city street – getting the resonance of it, the possibilities of it. He’s incredibly sensitive to sight and place and space and often that is what generates the work in the first place. 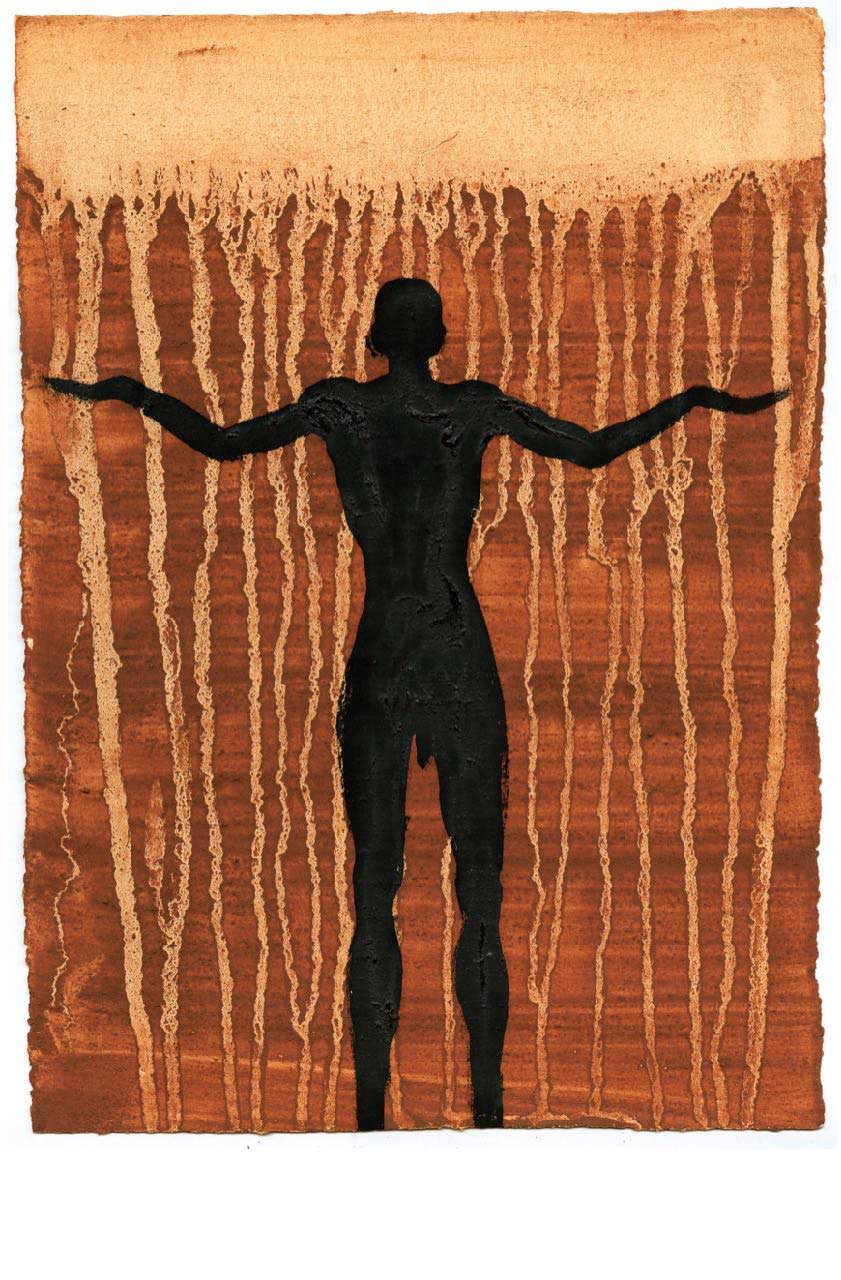 TDH: We forget this sometimes when we’re not the artist.
MCS: We do, whether we’re talking about a gallery space like this or the Australian desert. And sometimes a work finds a place, sometimes a place generates an idea for a work, and sometimes, (indicating the display cases), there are many ideas in these cases, where you can see he’s had the idea, five, ten, fifteen years before the opportunity has come.

What you have here is work going right back to the beginning, as well as new works, actually built here within the last few months, and then other works which he has staged elsewhere but has also re-purposed them into this context and this space. I would call them site-sensitive rather than site-specific because site-specific suggests that a work can only be where it is. These works take on different meaning by the nature of the space they’re in but also within the context of what you see before and what you see after, the fact that they’re in the Academy. The work at the end, Host, is made up of tons of earth from Buckinghamshire and so many gallons of seawater – and that, being in a building like this, is going to be different from seeing it anywhere else.

TDH: He’s really made all the world his stage, and this summer he exhibited on the island of Delos, a very special island in Greece. There must have been a lot of trust involved.
MCS: It’s a big thing to take on a whole Greek island, but also the culture.
It goes back to what I was saying before, how he has a great sensitivity to site. The restraint he showed there was quite remarkable: respectful, yet challenging where necessary, incredibly aware of the site, the grandeur of the place, the history of the place but also the intimacy of the place.

Underlying all the works, individually and the exhibition itself, is the principle of confrontation: confronting others’ work overtime through site work; creating a dialogue between his own works, now and then; exploring limits, using sculpture to challenge notions of space and ourselves – forever in search of the unguarded response. These elements are all here.

There is a room, at the very beginning, Slabworks, comprising fourteen approximately-life-size figures, each one made up of maybe twelve to fourteen 90 mm slabs of steel. Arranged into what are possibly the most abstracted figures Gormley has created, the unexpected emotional reaction they provoke set the stage for what follows.

In his explorations regarding sculpture v. containing walls, Gormley tests the authoritative nature of the building itself; two of the ceilings used in the exhibition had to be rebuilt and reinforced in order to sustain the works. Elsewhere large loopy coils of rebar seemingly straining to break free of the room they are in vibrate with even more energy when visitors get enmeshed within the sculpture itself (and sometimes themselves), as they physically negotiate the work. Denied perspective, no one really knows where to start or how to behave. 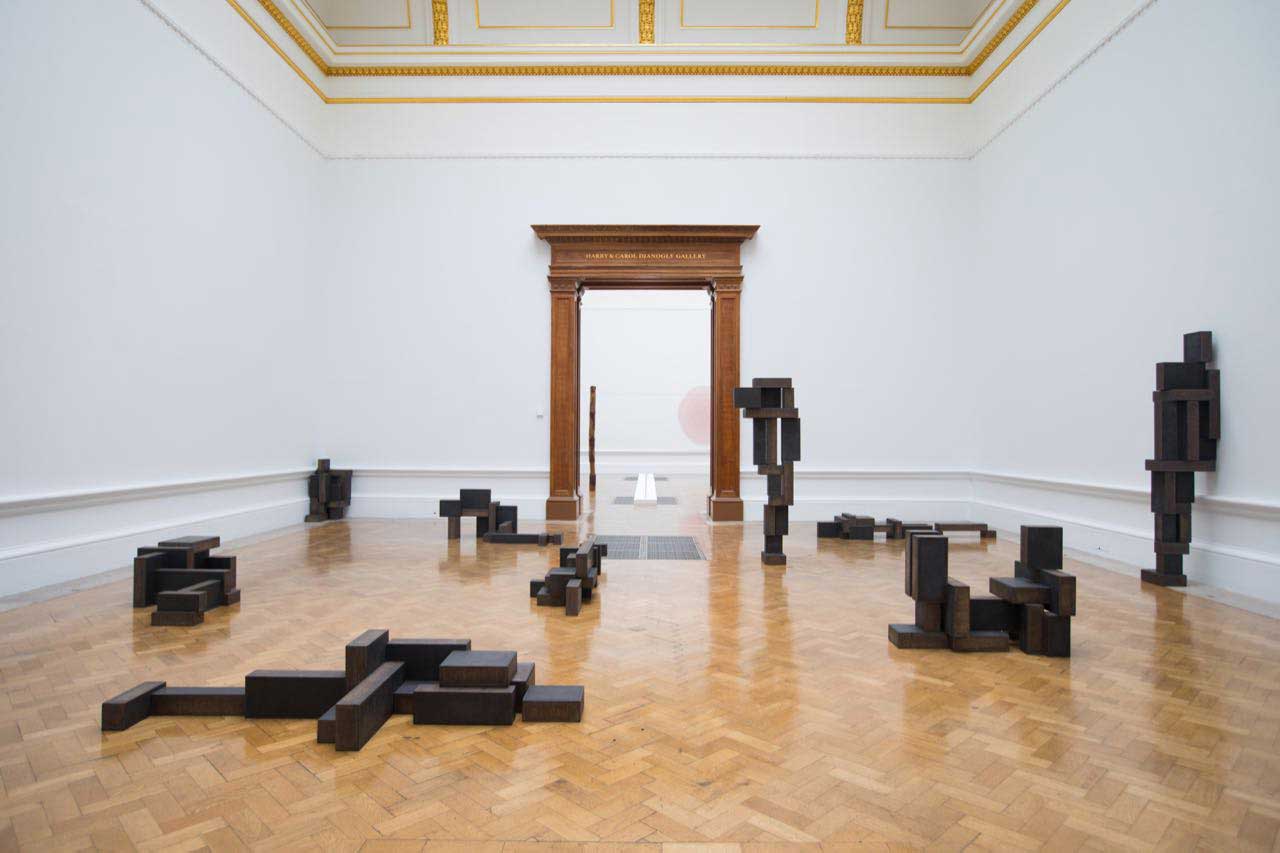 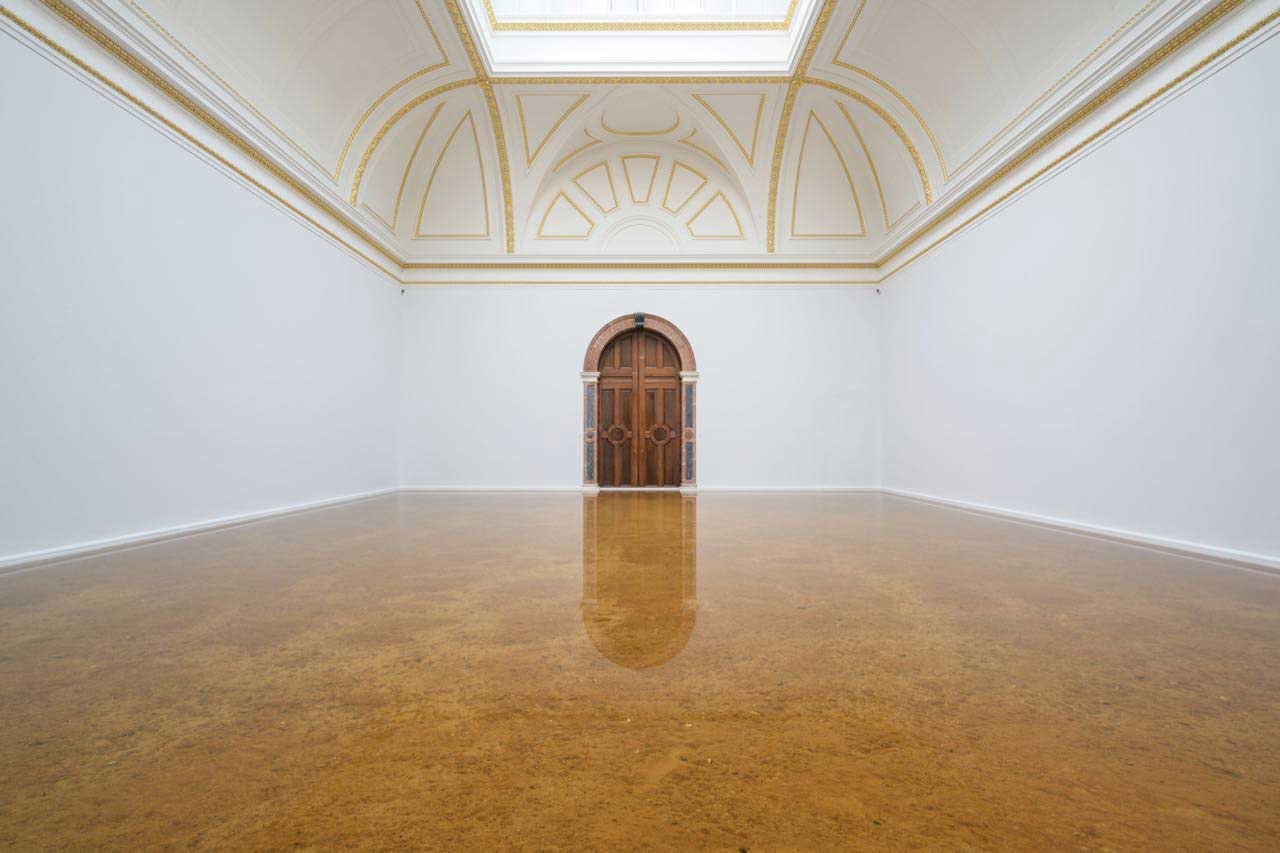 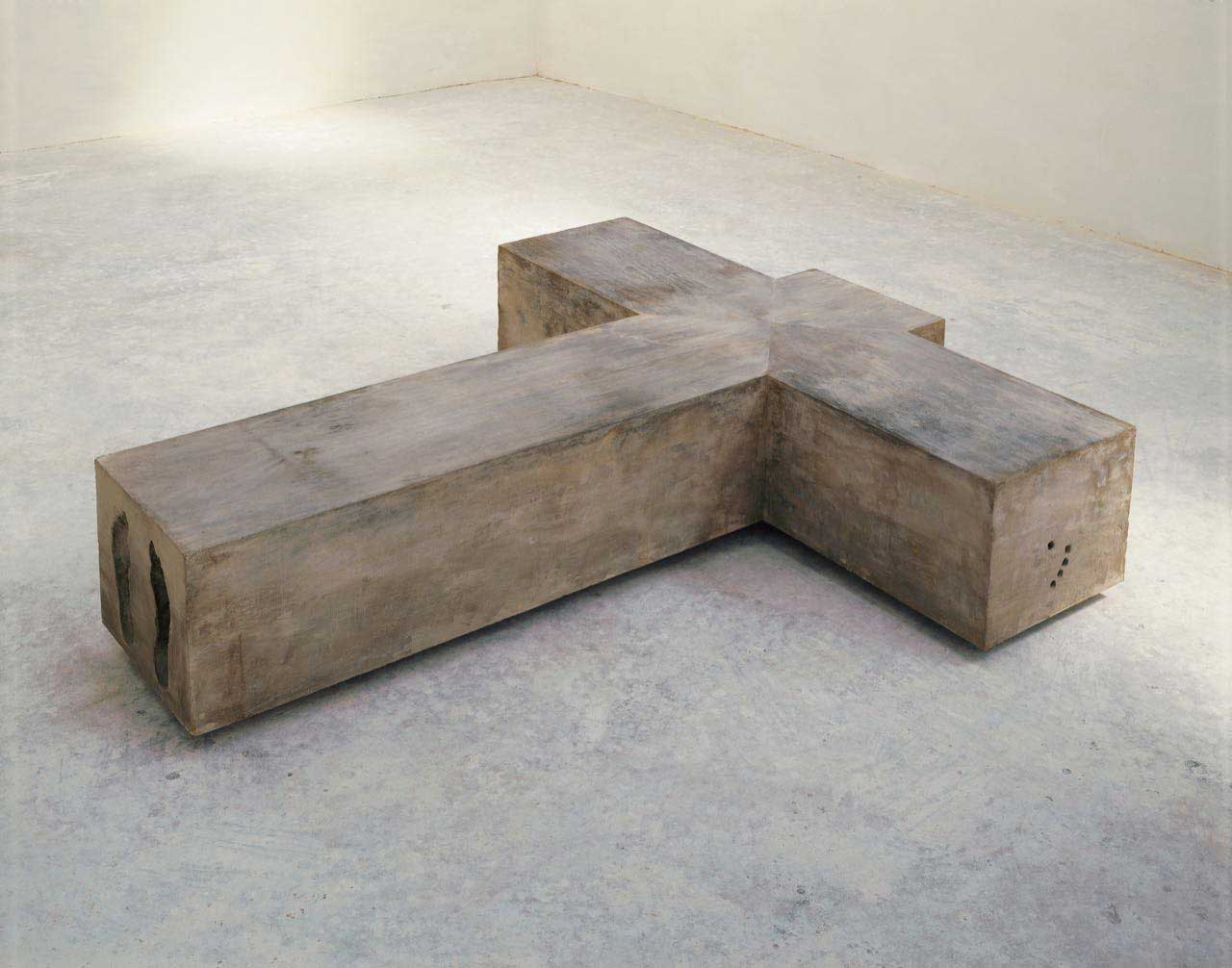